Noodlecake Studios has published quite a few games for Android devices. What some may not know, is that they help a lot of iOS game developers port their games to Android. As an example, the brilliantly conceived fighting game The Executive, will make its way to Android December 3rd, all due to RiverMan Media teaming up with Noodlecake Studios.

Update: December 2nd, 2015 3:08pm PST: Noodlecake has unleashed The Executive onto Google Play a little bit early. Well it’s on time if you’re in Australia or in those time zones. Otherwise, it is half a day early for us here in North America. You can grab a copy of this game through the new link at the bottom of this article. We have an interview with Noodlecake and RiverMan Media coming up shortly.

When I first came across The Executive, I thought it was a pretty unique concept. You see a guy running around in a business suit, putting the smack down on huge hulking werewolves and flying beasts. The artwork/graphics were impressive, and it just seemed like a fresh take on the fighting genre. All of that was before I had the opportunity to play it.

I contacted RiverMan Media in July after I found out that The Executive would be released on iOS. RiverMan Media also created the wholly original game Pizza Vs. Skeletons. It appears that they have a penchant for creating crafty stories and enjoyable games, that no one else would ever think of. When I spoke with them initially, they weren’t too sure that the game would make its way to Android. Of course I was disheartened, but we kept communicating about the game. Last week they contacted me to let me know that porting the game was indeed successful, due to teaming up with Noodlecake Studios. 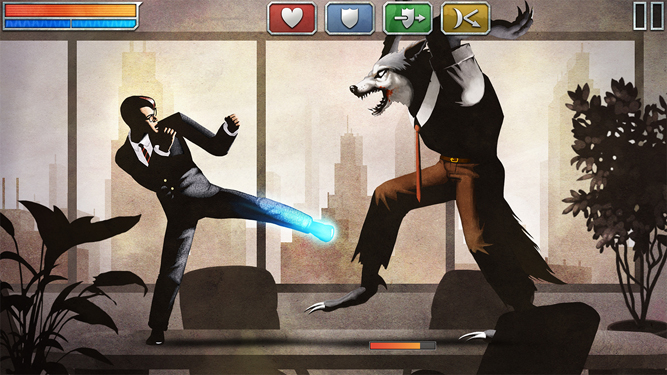 Now with just over a week away, you too, will have an opportunity to play one of the most uncommon fighting games to grace Android in quite a while. No, this is not a game like Soul Caliber or Tekken, in that there are an endless amount of combos available to you. What it is though, is a game you will enjoy playing because of the main protagonist, pulling of acrobatic stunts, and building your character in an RPG-like fashion.

“The Executive combines a high-speed combat system, timing-based running and platforming, 120 hand-crafted levels, a full inventory of moves and upgrades, and a simple mining company simulation for earning money, all into one cohesive experience. The fighting engine evokes a cross between Street Fighter II and Zelda  II: The Adventure of Link, with controls designed from scratch to be ideal for touch screens. The platforming (or ‘stunt’) segments require precise timing, similar to Elite Beat Agents but with an emphasis on visual timing instead of musical rhythm.” RiverMan Media & NoodleCake Studios 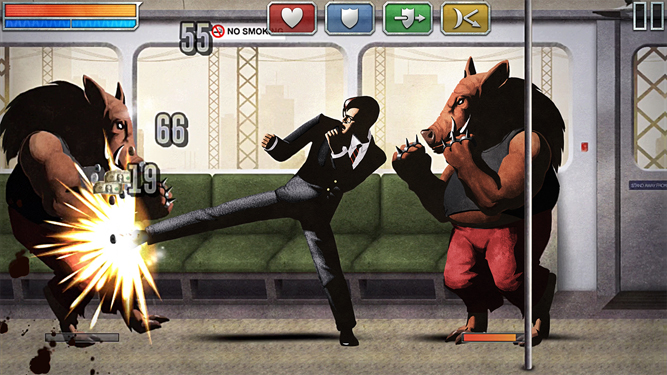 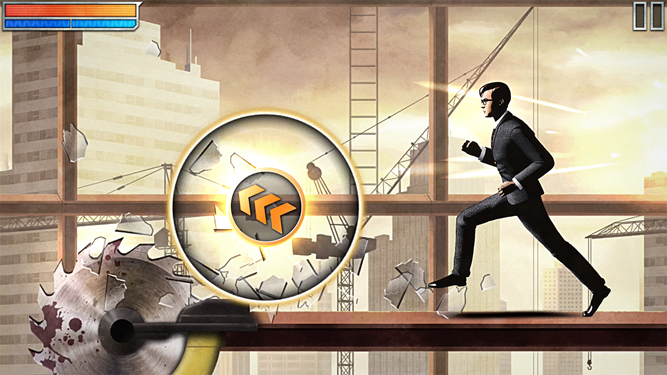 I have recently had the opportunity to start playing The Executive, and it is visually refreshing and fun to play. The controls are easy to to learn and are flawlessly implemented. The ability to upgrade your character and run a mining company at the same time, almost makes this two games in one. The beasts you encounter are gargantuan and intimidating to say the least. Some of them just seem like they are out of this world. If you have ever played or taken a look at Pizza Vs. Skeletons, then you will understand what I am talking about.

If you enjoy fighting games, definitely add this one to your wish list. It will be arriving for Android devices December 3rd. We don’t have word on the pricing yet, but on iOS it is a premium priced game selling for $4.99. With 120 levels there is a lot to play and try to master in this game, as each level you are ranked from A to F. 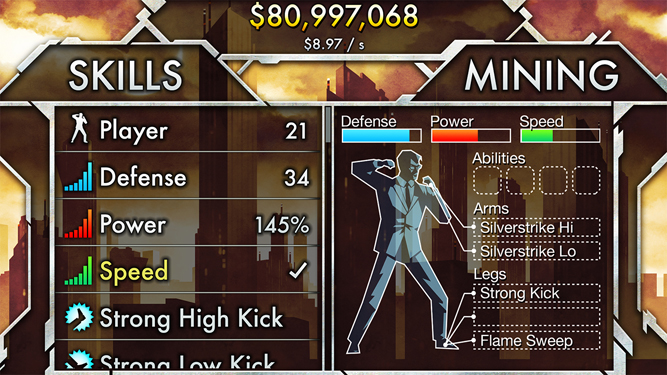 We will have more about RiverMan Media and Noodlecake Studios teaming up for The Executive soon. In the meantime, check out the trailer, and let us know what you think in the comments. Are you excited about this totally unusual fighting game? We are! We will update this article once the game goes live.