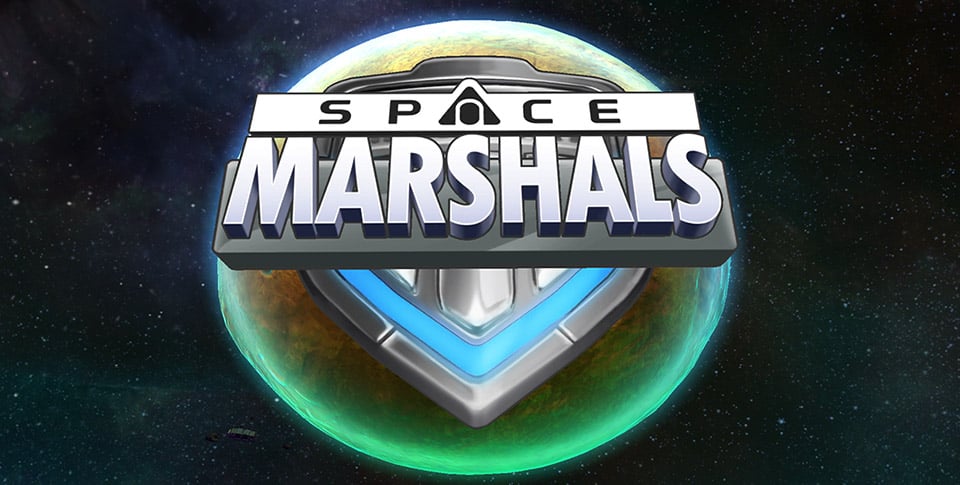 The story for the game is that I assumed the role of a Space Marshal that was suspended from his job, and is also in suspended animation. The ship I was on was full of criminals who escaped from their suspended animations, and it became my job to secure them again, as well as rescue other members of my squad. Eventually crash landing on a nearby planet, it falls to my character clean up the ensuing mess. This is also where they begin to work the Western elements into the game, as it’s a desert world with cacti and alien animals that stand around much like grazing horses, ten gallon hats are worn there, and so on. Sci-fi elements within the game include mind control devices, space stations, lasers, personal shields, artificial intelligence, and so on. 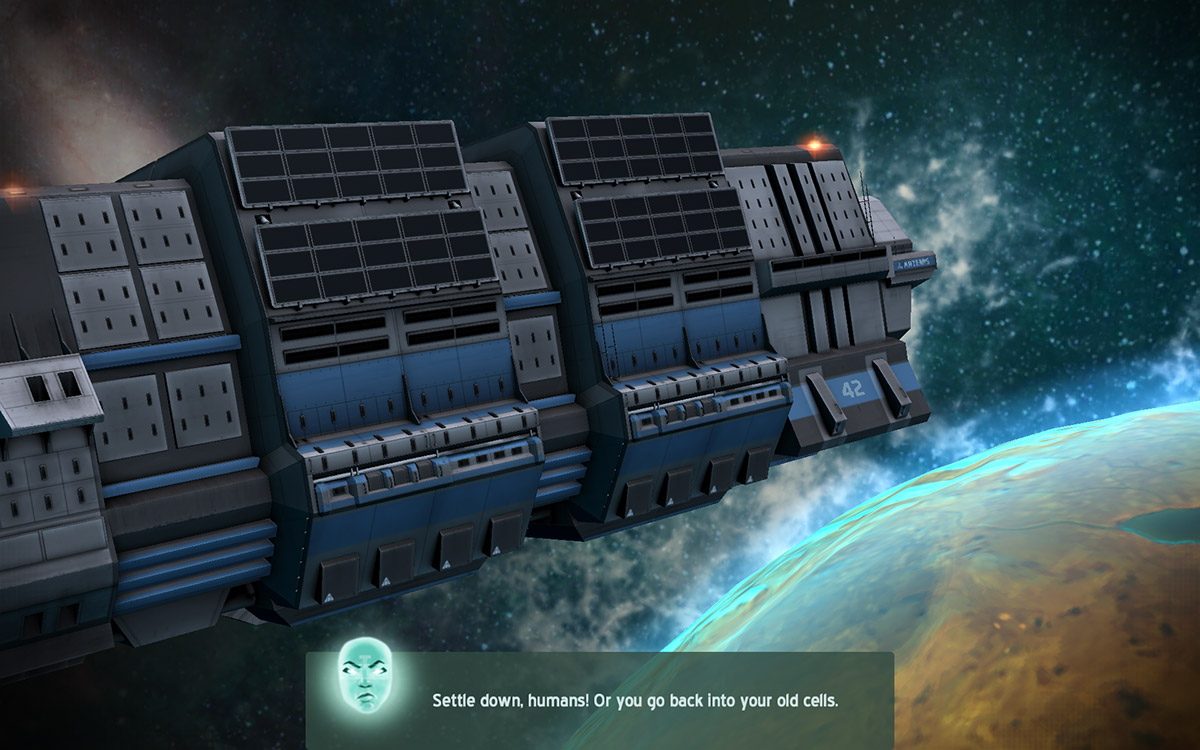 The game incorporates a lot of what can border on grist for both genres, but does so without making them feel like tired tropes.The game contains a total of 28 missions, and while the metrics (on which I was graded) at the end of a mission were almost always the same, there was a decent amount of variety in the settings and enemies that kept things from feeling repetitive. In some levels, I was in a space station, while others were in mine shafts with little lighting, or playing throughout the flashback in someone’s narrative. Enemies ranged from cowboys to behemoths with heavy weapons, to quadrupedal spider-like creatures, and more. The changes in the scenery and enemies followed the plot of the game quite nicely.

As for the story, it was another strong point for this game. Squad mates needing rescuing, various criminals needed capturing, plans needing stealing, computer programs needed comprising, and more. The dialog was entertaining, with my each character being a bit of a “characters”. I even found myself laughing at a few spots. Typically, there would be a meeting is sorts before a mission would begin, for the narrative to be advanced. Once that was finished, I could begin the mission. Before and after the discussion, I was able to tweak my equipment. 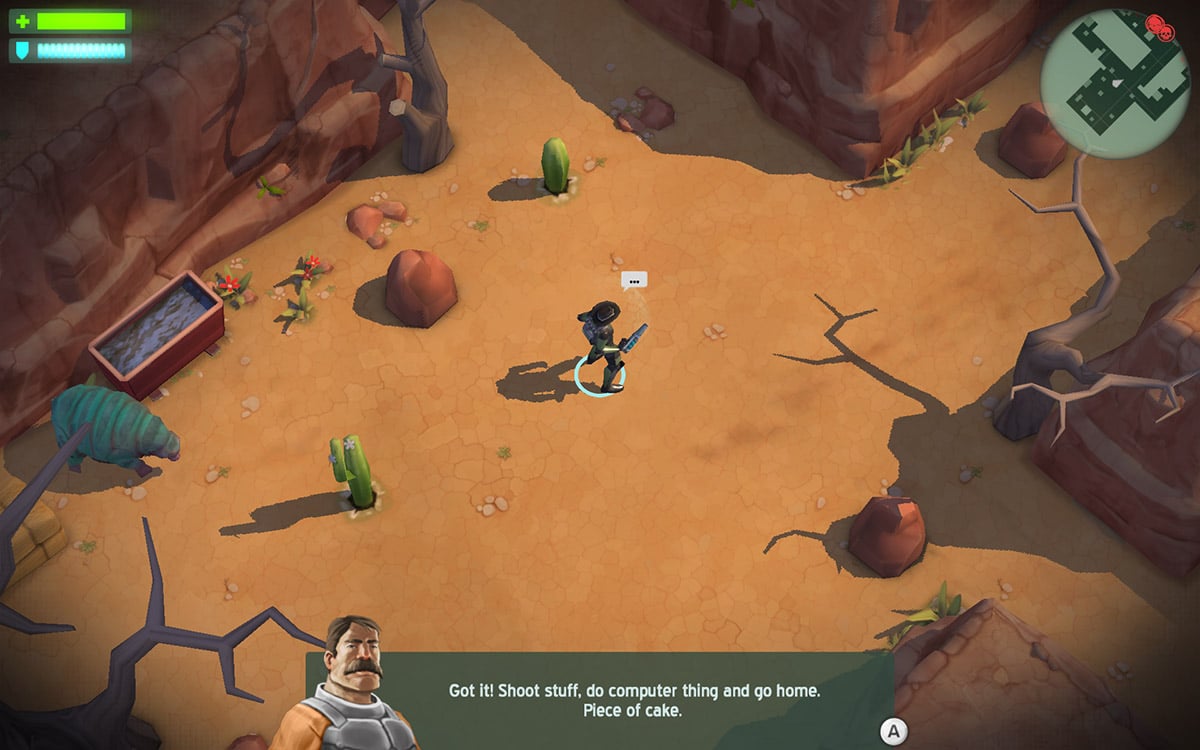 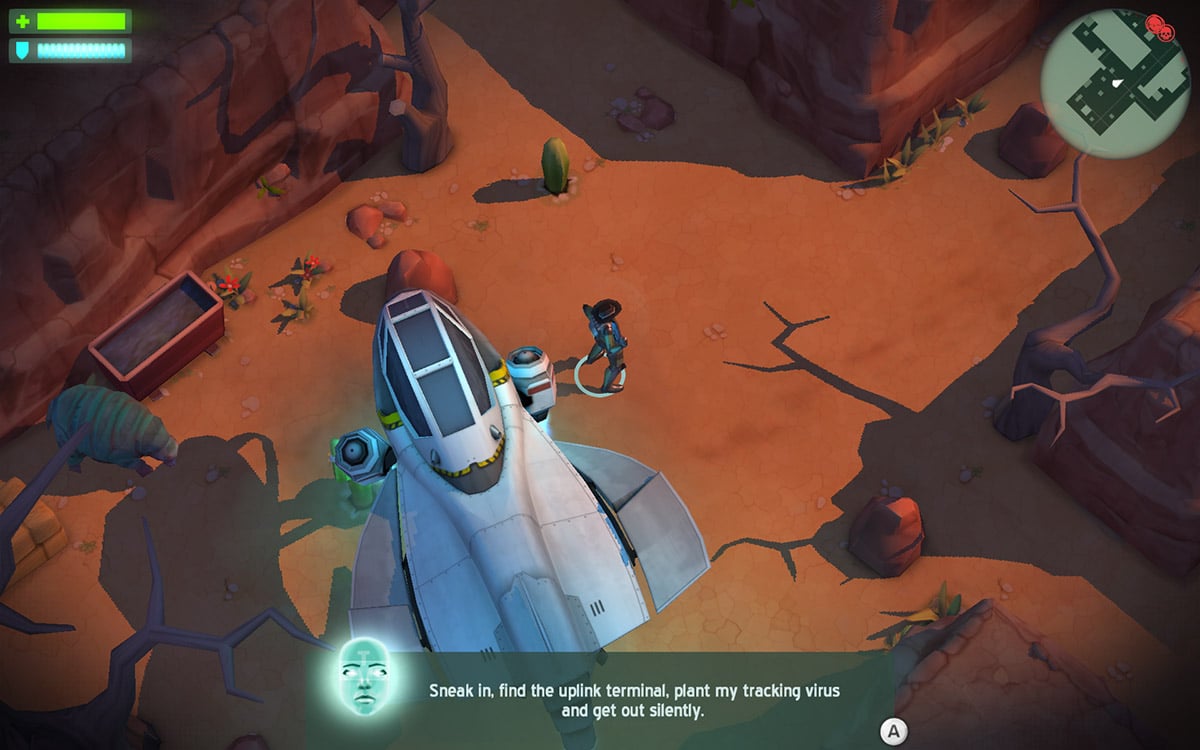 In the upper right hand corner is a mini map, and tapping on it would pause the game and open up a larger map, with options at the bottom for things like resuming play, or exiting out of the level. The top left of the screen indicates how much health and shielding I have left; health never regenerates on its own and is only restored through pickups within the level, though shielding will regenerate if it’s not overloaded. One thing I found nice about the shielding meter was that the icon for it would remained lit while it was in working order, and the icon would darken if the system blew out from being overloaded. Once that occurred, the shielding wouldn’t work until I’d found a shield pump lying around or dropped by a killer enemy. Once one was found, the shield generator would come back online and function again.

The game includes some choice in my load out, though it falls well short of being an RPG. I carried a two firearms, and two support items at all times. As I played through the game, I accrued more weapons and items, thus causing my selection to grow. There are four slots, two in each of the bottom corners, that contained gear. In the right hand side, there are the firearms. One slot is for pistols, the other is for two-handed weapons (shotguns, rifles, crossbows, et al). In the left corner, I could equip any combination of grenades, health, mines, flares, and more. For the broader categories like grenades and mines, there were multiple kinds like flashbangs or plasma. Others were “one offs” that would do a single  thing well, such as limited teleportation or portable machine gun turrets. Regardless of the type, it would require throwing to activate, so if I had selected a health pump to occupy that slot, I would throw it like a grenade, and then pick it up in order to use it.

I also could tweak what armor I wore, which determined my health and the strength of my shield, and sometimes shaved off some of the noise my character made while walking. Lastly, I could also change the headgear, though of all the headgear that I found, they all seemed to only be cosmetic, like a colored cowboy hat or space mask. Personal shields are another integral function of the game. Anyone wearing one, myself or enemies, only received protection for the anterior portion of the body, leaving the posterior side vulnerable. With the exception of select weapons that could bypass shields altogether, damage was first done to the shield, then dealt to health once the shield was depleted. This placed a premium on sneaking up behind your enemies, and keeping them in front of you when fired upon.

The controls of the game required two thumbs, as one might expect: one to controls where I was walking (left thumb), and the other to control where I was looking to fire a weapon (right thumb). Most of the weapons required that I use the right thumb to aim, and then release it to fire; machine guns seemed go be the only exception, as they’d fire as long as I held the button down, and had ammo to use. The other items worked similarly, required me to aim and release. What was nice about using the secondary items was that when I was holding down the fire button, an arc would appear to show the object’s trajectory, including any bounces off the ground, or if my throw wouldn’t clear an obstacle. Nicely done. 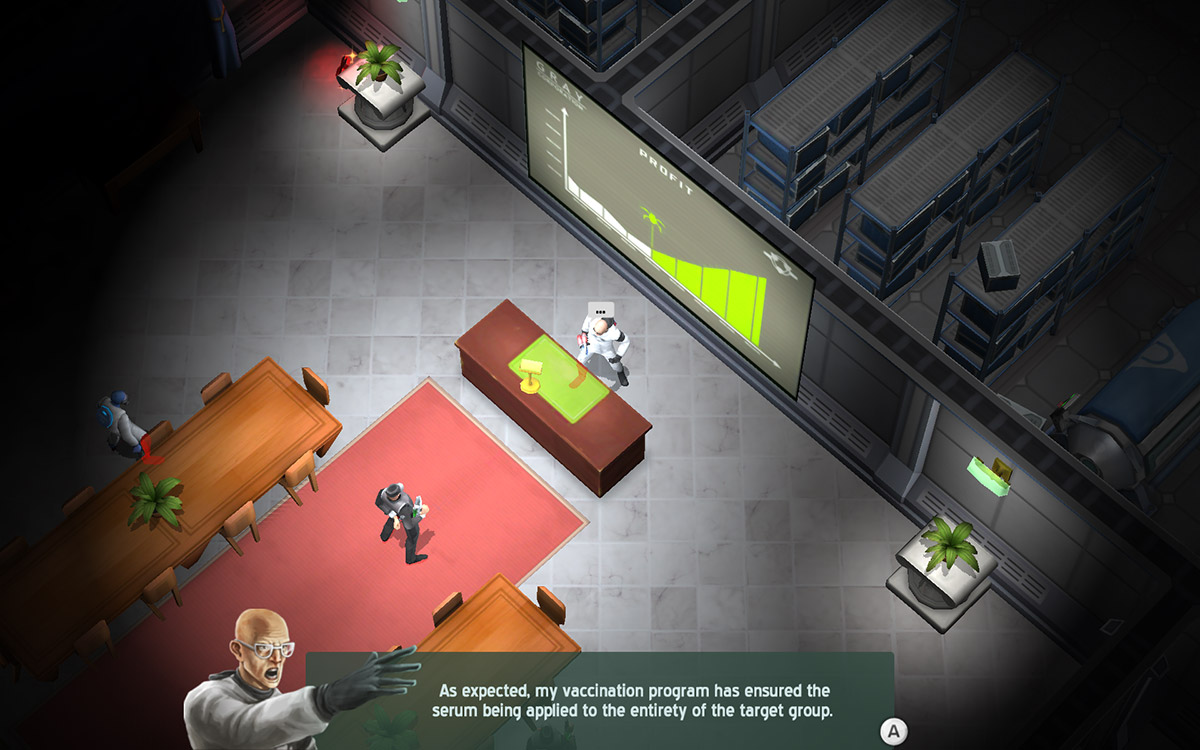 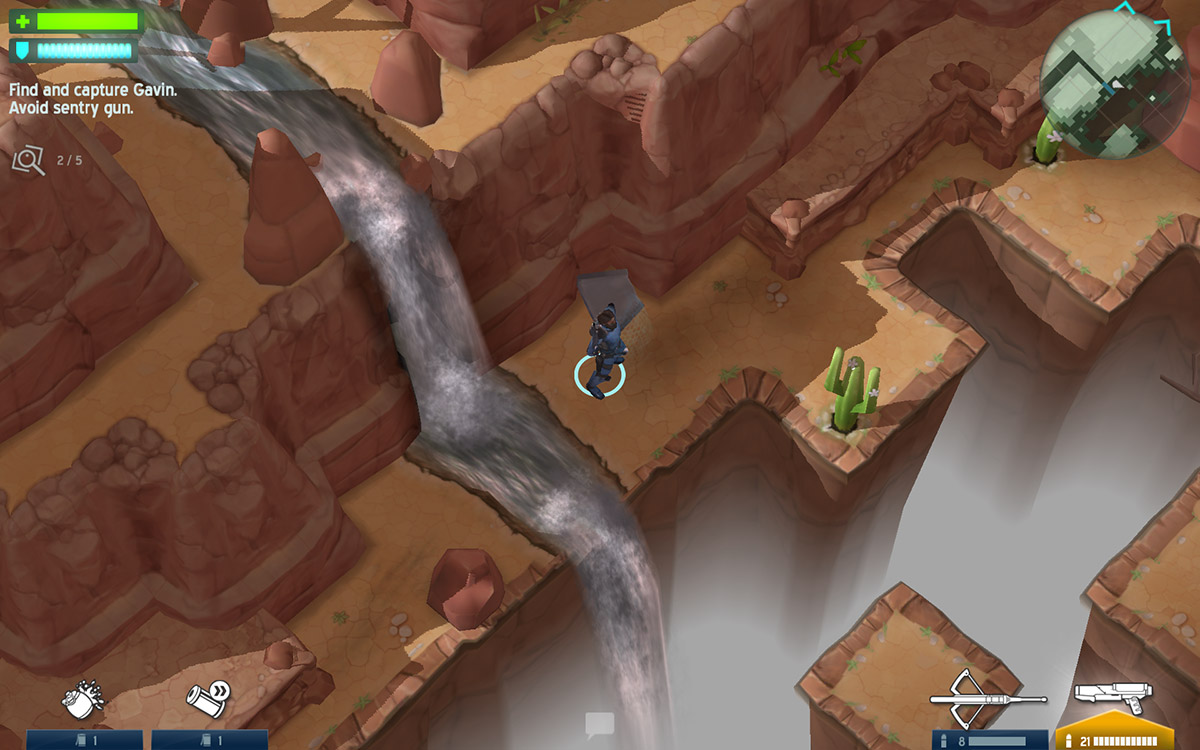 Tapping almost anywhere on the screen would toggle between two modes. First was sneaking mode (read: crouch), where my character would move/duckwalk significantly slower, but would make almost no noise. The alternate was offensive mode (read: standing up) where I’d move much faster, but the trade off is that I would make much more noise. Balancing these two is important, as it’s easy to draw unwanted attention to yourself and get overwhelmed in a firefight. Much like the Metal Gear series, enemies are are found in any number of states of readiness, from vigilant to outright sleeping on the job. The amount of noise I make from movement, to discharging firearms, or other reasons, all get the attention of enemies. All enemies also have a white cone emitting from their eyes, to indicate their field of vision, though the distance at which they see things extended far beyond the cone.

All told, movement and sound need accounting for, whether it’s from walking, discharging weapons (some are quite than others), explosions, opening doors, and the like. If you happen to catch an enemy unawares, your attack constitutes an ambush, and bonus damage is awarded. All told, the game seems to favor sneaking, though it contains a good amount of outright firefights. On the whole, these Co tools aren’t bad for what the game asks of you. As one might got expect, using a controller is considerable difference. And while the game plays butter with one, the game is still very playable using the controls I described. Touch screen players need not be wary here.

As mentioned earlier, each level is graded at the end, on a few different metrics. In most of the cases, it’s how many times I died before completing it, and how many of the “high value targets” I killed, before completing the level. If I managed not to die, I was awarded the maximum points for that category, which was usually three, and then one of those there would be subtracted for each death. Killing off targets worked the other way, with a point being awarded for each kill, usually capping out at two. Adding both maximum scores together always totaled five. Your score would determine your reward for finishing the level. You can only pick one, but the more points you were awarded would unlock additional and better choices, with five points having unlocked all the choices available, and for each point less, an available reward would be locked out.

The game allows unlimited replay, so you can restart from a checkpoint (after dying) as much as you’d like. You can also go back and replay any level as much as you’d like. This comes in handy for two reasons. First, there are levels with more than one good reward that you’ll want to get. If you can’t decide, you take one and then replay it in order to acquire the other one. The second reason is related to collecting clues. Clues are just like any other item lying on the ground in the game (such as health, ammo, shields, etc), but there are a finite amount on every level, and you need to have a certain amount in total, in order to progress to the next level. Oddly enough, and this would be my one and only beef with the game, was that it was never clear on how many I needed. Either it was omitted, or not obvious. 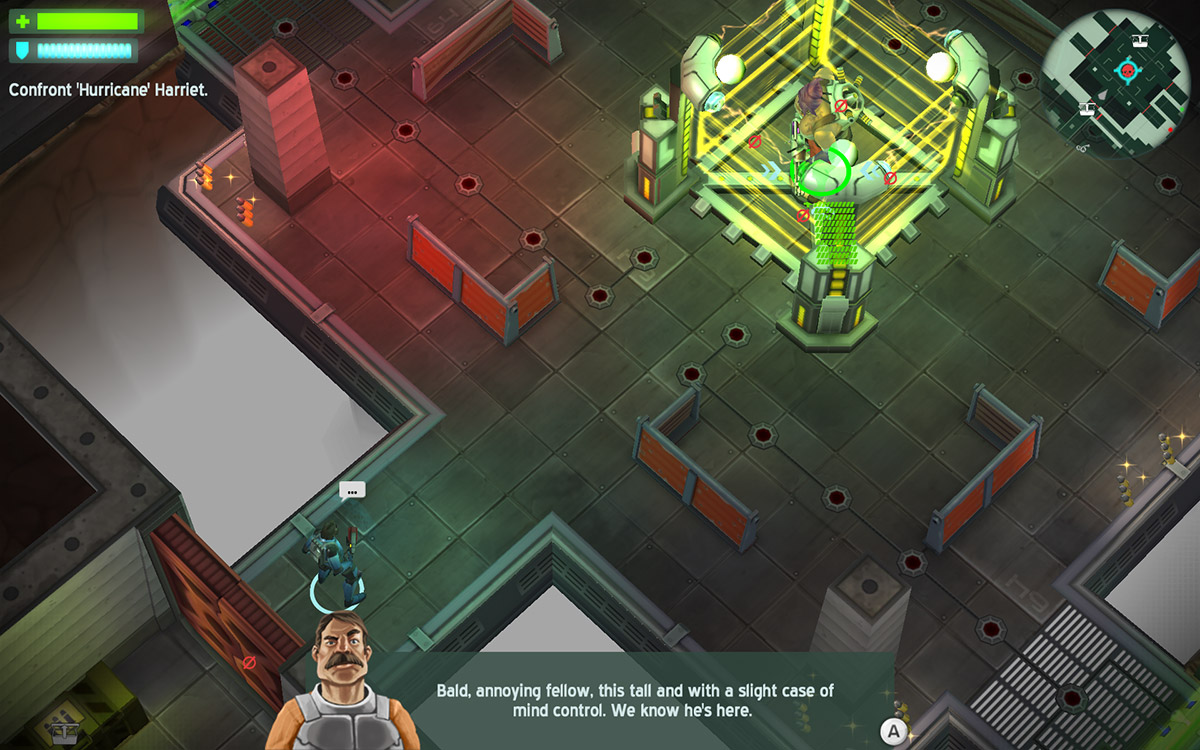 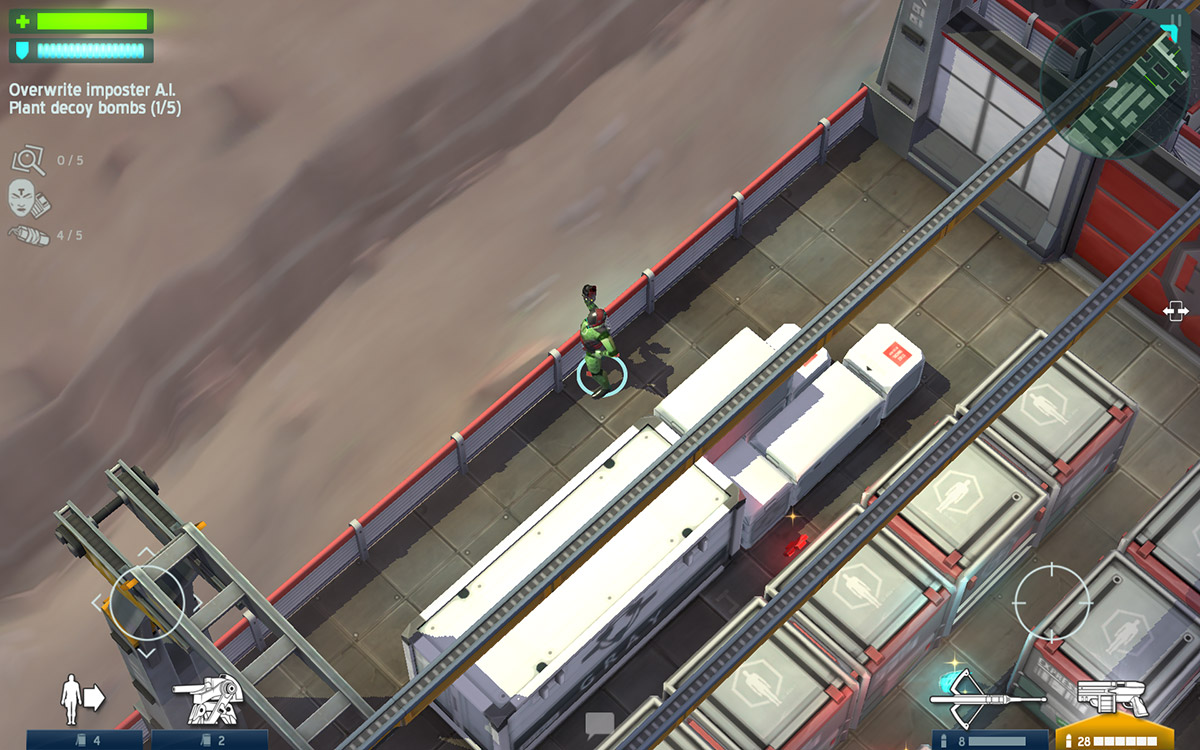 When you fall short of the required number of clues, the game doesn’t let you progress without first going back to previous levels and finding more; to offset this hassle, the game does a great job of allowing you to see what you’ve already found or been awarded on every level, so it’s not difficult to see on which levels you could have died fewer times in order to earn a better reward, or which levels you neglected to find all the clues on. Once you’ve found enough, you’ll be able to progress onward in the game.

The soundtrack for the game was typical for an action game or movie. Nothing sounded out of place or detracted from the feel of the game. The graphics weren’t anything that blew me away, but everything appeared clear, and looked nice. The game can be found in Google Play or Amazon for a flat $4.99. It’s also an easy game for me to recommend. Fans of sci-fi, westerns, dual sticks, or just great games, will enjoy this one. There’s lots to like about it.