In other Bethesda news, the company’s popular Fallout Shelter mobile game has received an update today that brings with it all kinds of neat little features for players to check out. One of those features is the ability to actually evict lazy Dwellers from your Vault. That’s just one of the cool new features that has arrived with this update.

Another big addition to the game happens to be pets. Players can now have Dogs and Cats roaming around their Vault and they are actually useful as well. Pets will keep your Dweller happy and productive, which is always a good thing. Also speaking of happiness, Dwellers now have new ways to communicate and impress the opposite sex. 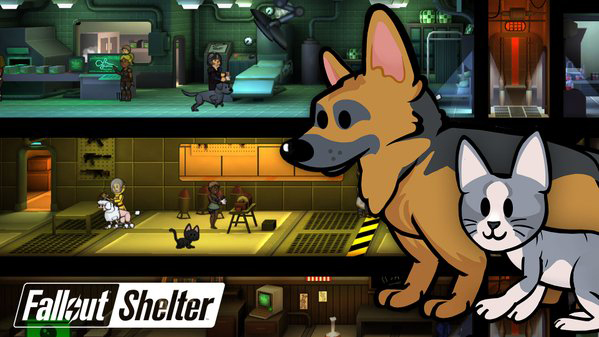 – Vault-Tec research has shown that 4-legged companions can have a profound impact on Vault happiness and productivity. Introducing Pets!
– Vault-Tec has received reports of some Dwellers not pulling their weight. Overseers are now authorized to permanently evict these lazy layabouts! Welcome to the Wasteland, slackers…
– Bored with the same pickup lines and conversations?  Dwellers have finally learned some new ways to impress other dwellers and the opposite sex.
– Excessive tapping causing frustration when trying to clear out excess inventory?  Overseers will love the new sell all options.
– Dweller management improvements and new objectives should help experienced Overseers keep things running smoothly.
– Even more Vault-Tec certified improvements and optimizations. Because you can never have enough improvements or optimizations.

Another great feature is the new Sell All option when looking to clean out your inventory. Now it won’t take you 20 minutes of slow selling to make space. If you happen to play Fallout Shelter, this great new update is now available for download off of Google Play. Feel free to be generous with the evictions too.