Strike Suit Zero is a space sim that is released by Born Ready Games. Being a fan of this genre, it was one I was looking to sink my teeth into, and I went into the game with moderate to high expectation. Let’s see how the game actually played.

The story for the game is fairly straightforward, both in the prologue, as well as throughout the game. The game begins with a lengthy narrative, with humanity having received a mysterious signal from outer space that grants them the information to achieve interstellar travel. Thus begins the search for the signal’s origin. As time passes, the governance on Earth began to have differences with the colonies in space, thus sparking an interstellar civil war (of sorts). I assumed the (only available) role of an Earth-aligned star fighter who was being reinstated into combat service. 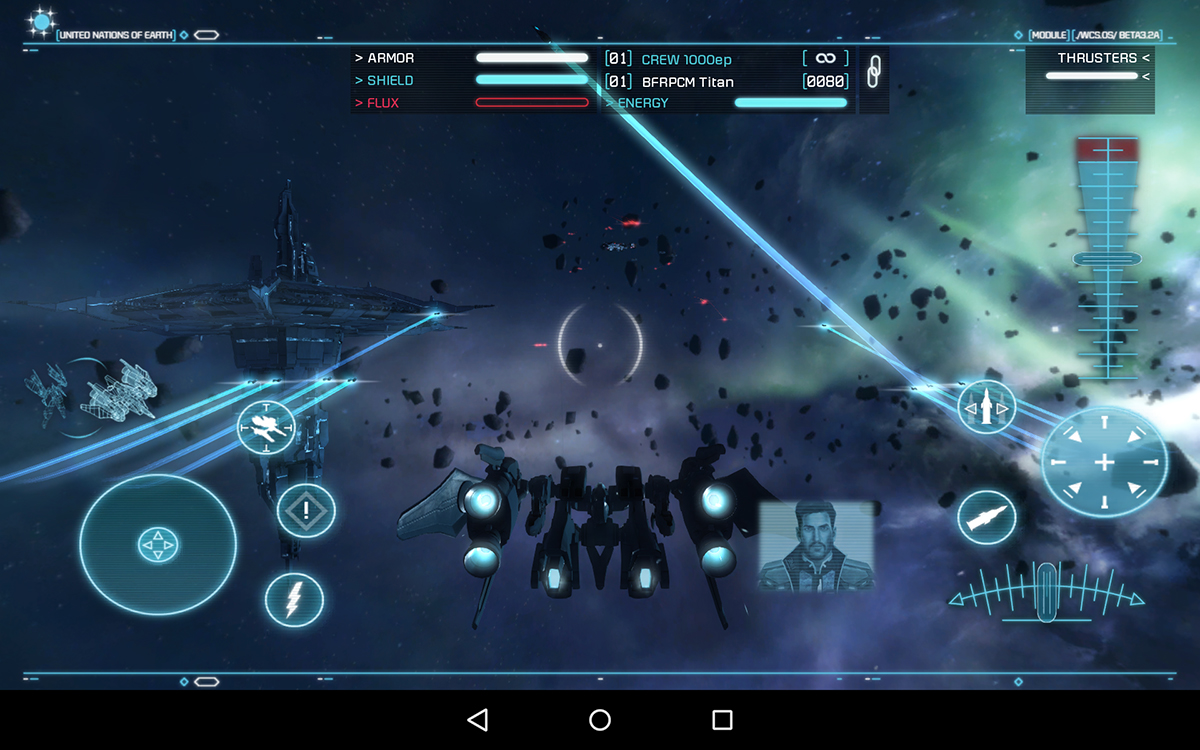 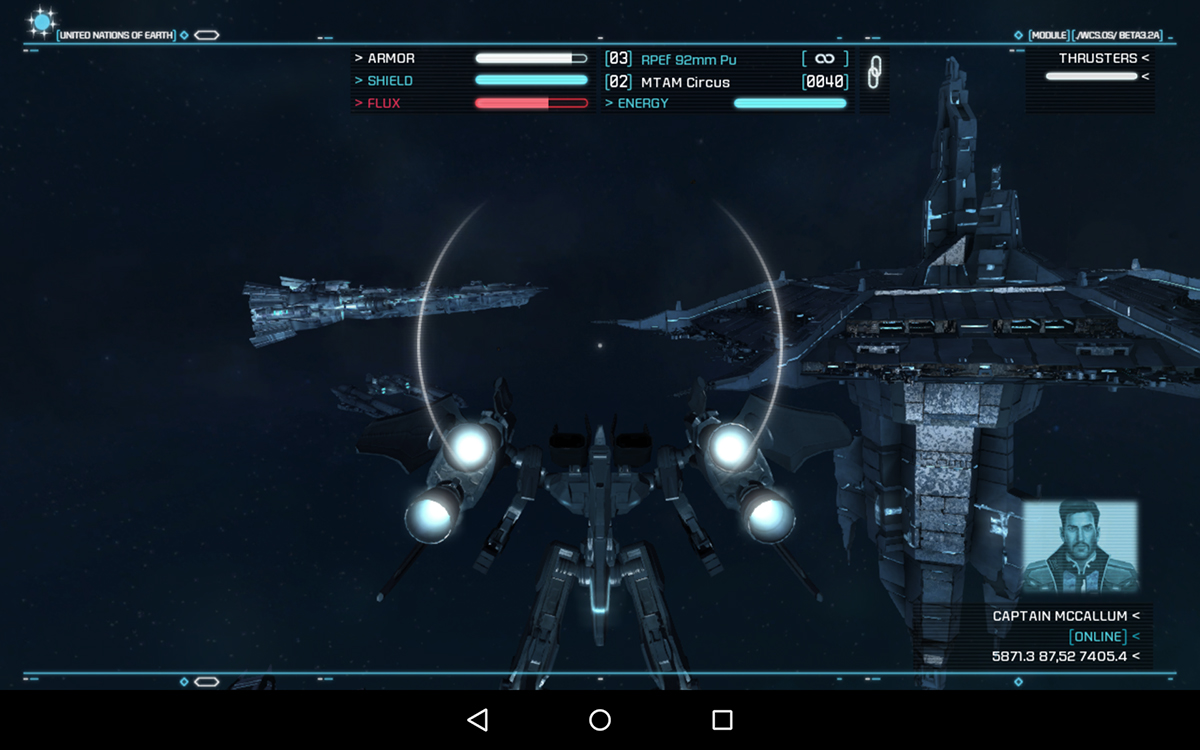 There are a variety of NPCs in the game that you interact with through the campaign. You’re trainer, a cyborg AI, the commander of the fleet, and so on. The story is conveyed through a couple of different means. At the start of a mission, there is a a sequence of screens devoted to mission-prep, where you get your orders in a nutshell, and deal with other related details The mission then opens with a cut scene of the starships, with voiceover and a picture in the lower corner for who’s speaking, then the mission begins. It’s not common for there to be a lot of dialogue during the missions, beyond updating your objectives.

The missions sometimes included cut scenes that intersperse the combat, and this toggling between combat and story telling had a nice flow to it. Finish a dog fight, then listen to some dialog while some capital ships jump in and your objectives update, then you carry the new ones out. Missions typically ended with a cut scene as well, before going to a mission debriefing screen where your progress is tallied up, and awards and bonuses awarded. The story goes beyond the civil war, as it involves alien technology as well, and ended in a short cut scene, bordering on perfunctory. While not exactly dripping with drama and suspense, I enjoyed it for what it was.

When beginning a mission, I was walked through several screens that would begin by briefly explaining what was expected of me, and then it would walk through some specifics such as what vehicle I would pilot along with stats, and its armaments and payload, which could be tweaked once alternatives were earned through bonus objectives. The stats (energy, armor, shields, etc) can also be upgraded through bonus objectives. All of this was clearly spelled out during this briefing phase, and could easily be skimmed or viewed at glance. The debriefing screen was similar, with awards being given for either achieving the bonus objectives and thus unlocking new weapons or improved stats, or by scoring enough points to be awarded a medal. 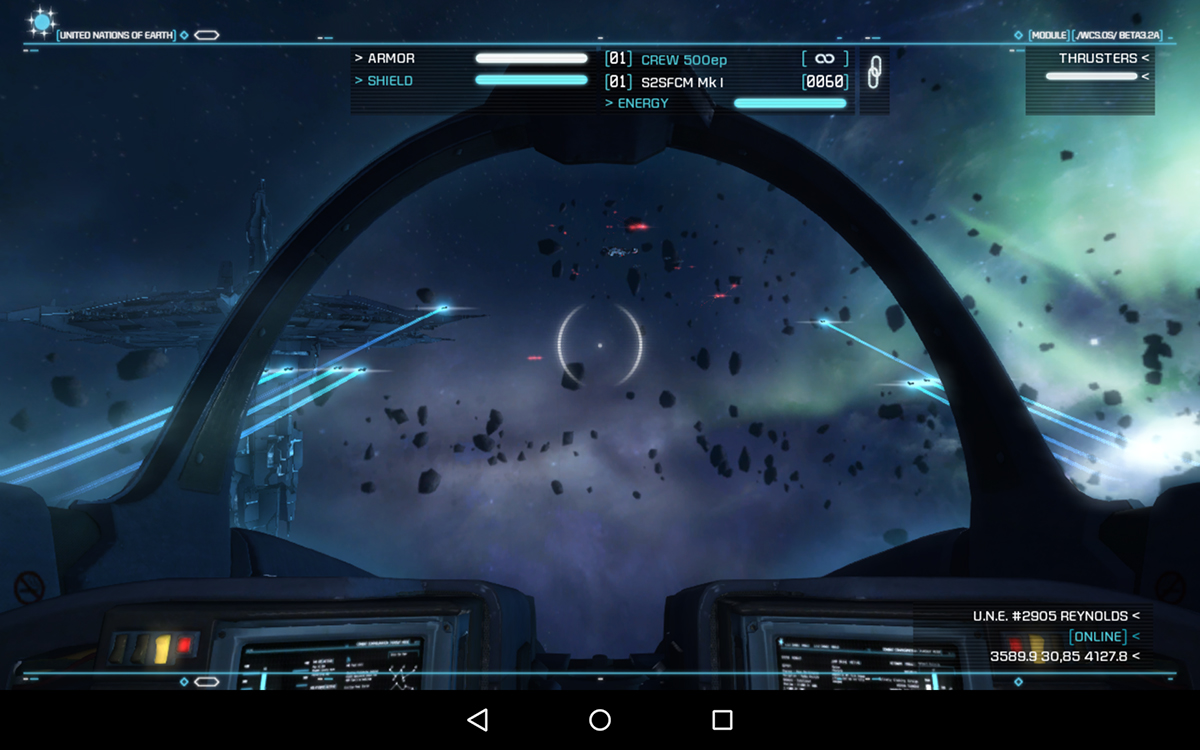 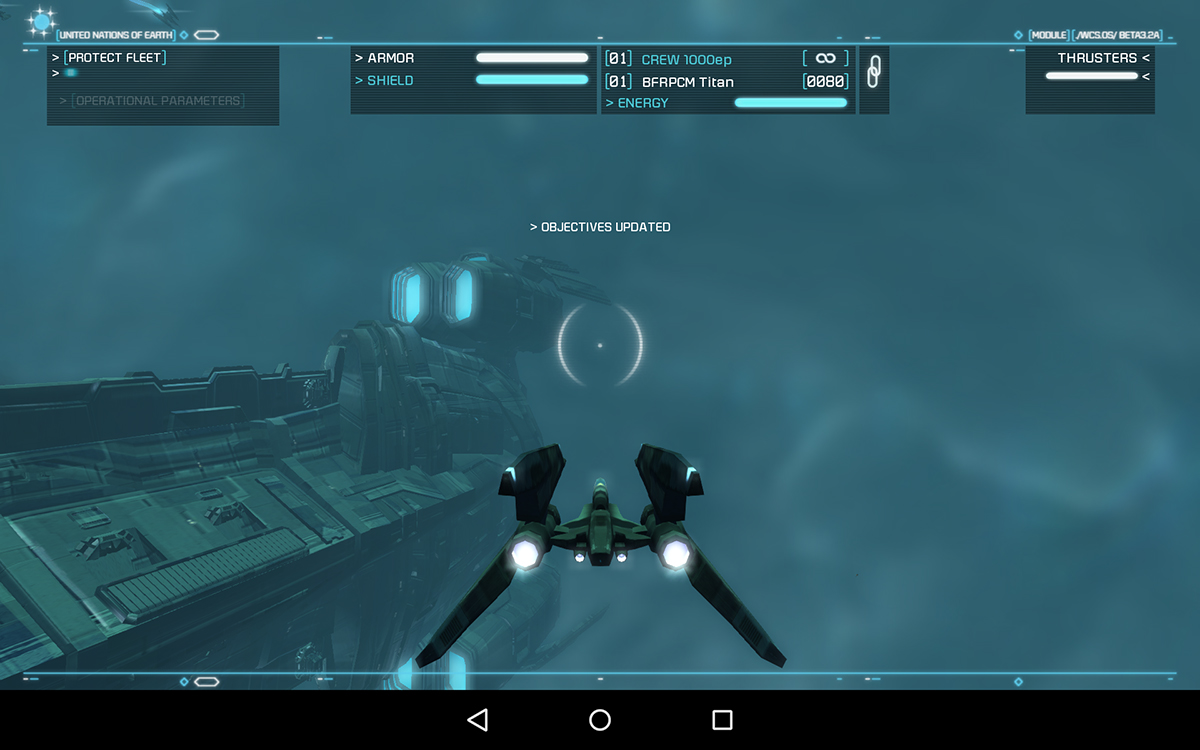 In the lower left-hand corner of the debriefing screen is a progress bar. Everything I blew up was listed by category, and I was summarily awarded points for each one, filling the meter. Each time points were awarded, the meter would begin to fill up. Every time I filled up that meter, it would start over and I was awarded a better badge for that mission, that began with bronze and was capped out at platinum; if I didn’t have enough points to complete the meter at least once, I received no badge at all.

There are three difficulty levels found within the game, and you can decide at the start of any mission what you would like to play, so you’re not locked in to a particular difficulty from the start of the game. There is no save file system, with each mission simply unlocking as you complete the prior one, and checkpoints that occur during the missions that work as save points, allowing play to resume play from the checkpoint instead of the start of the mission. There are thirteen missions in all for Strike Suit Zero, with the first mission or two having the feel of a tutorial, but given the complexity of controls, that’s not a bad thing here.

There are a plethora of buttons and information on the screen, and frankly mastering them strikes me as prohibitive. There are different buttons for firing (primary and secondary weapons) targeting (next target that’s relevant to the objective, or nearest) , steering (pitch, yaw, and roll), throttle, turbo boost, you get the idea. Using the Shield controller was a night and day difference, when compared with the virtual controls. I can’t recommend enough playing with a hardware controller. Using the controller allowed me to fall back on muscle memory, and I felt it was appreciably better. Even the visual info via the game’s HUD was a lot, yet it all worked in the end. There were blue arrows pointing off screen toward friendlies, and red ones to hostiles. There is a (usually small) white rectangle in the center of the screen that would have an arrow on its periphery indicating the direction in which I would find my target or objective. The upper left contained objectives, and health bars for important ships that needed protecting, and the upper right contained thruster power, and the top center with shields, armor, and more all of this can be viewed in either this or first person modes from within the cockpit, or behind the ship, respectively. 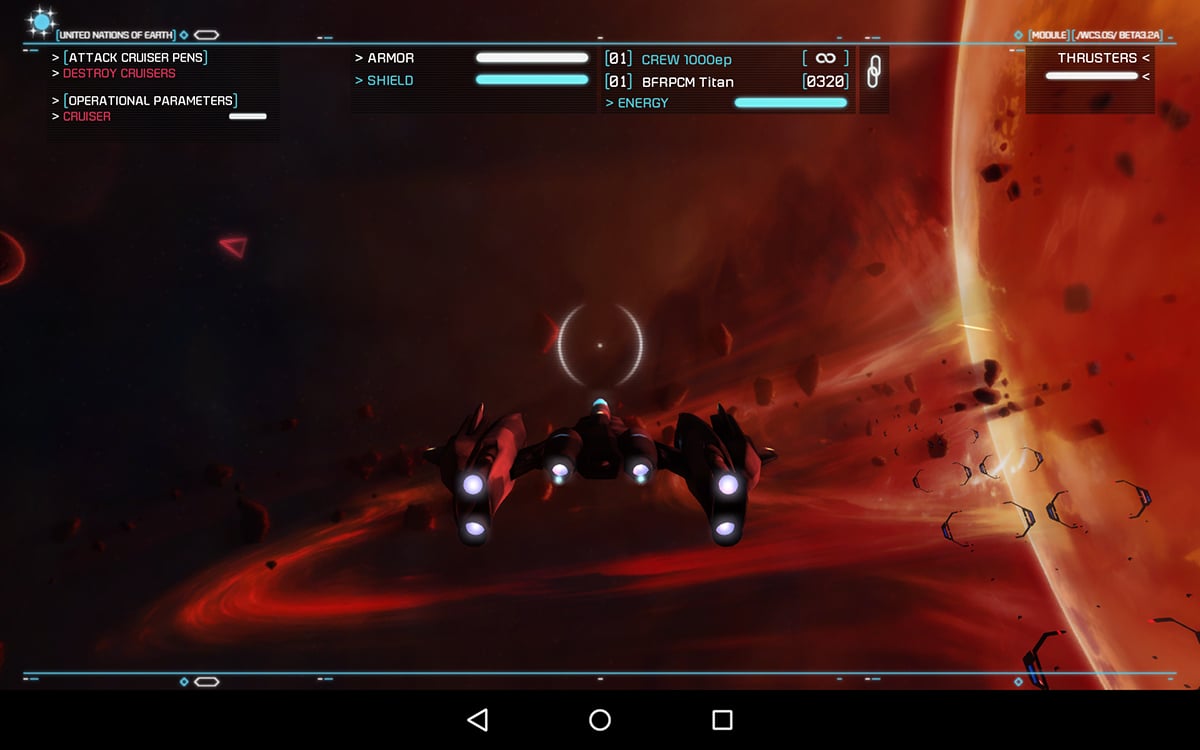 To my mild and pleasant surprise, once I got it down, it all made sense and really wasn’t as “busy” as one might expect with this veritable grocery list of info residing in different portions of the screen. Using the Shield controller was an absolutely night and day difference, when compared with the virtual controls. I can’t recommend playing with a hardware controller enough. Each mission involved combat in some form, either blowing stuff up on its own merit, or blowing stuff up preemptively in order to keep from getting blown up. Such is war. And again, while this seems repetitive to the outside observer, “sigh… here we go again” never crossed through my mind. The aforementioned interstitial cut scenes helped break up any monotony, as well as the occasional shaking up of mission parameters such as introducing new types of ships to fly or finding reasons to prohibit the use of certain weapons; a clear example of this would be “missiles can’t track while in a nebula, so only dumb-fire ones are allowed for this mission”. They weren’t heavy handed about that sort of thing either.

What really drew me to this game was the main starfighter that I got to pilot most often: the Strike Suit. It starts out as a traditional star fighter, but with the tap of a button it transformers into a large robot that’s armed to the teeth. The former mode is called pursuit mode and the latter is strike mode. This was designed with a bit of balance between the two. In Strike mode, players can float in space and zip in any direction, a bit like a helicopter. Double tapping in any direction works like “juking” and helps to dodge incoming missiles. Strike mode depends on “flux” to fire the weapons that it has, which are a heavy machine gun or a swarm of small but effective missiles.

The flux meter appears near your shields and armor, and is depleted as you fire weapons. Flux is collected in a couple of different ways. First, it can be slowly accrued while flying around in pursuit mode. The meter fills much quicker when you blow something up. This can be done in either strike or pursuit mode, but doing so in pursuit mode seems to net more into the meter than in strike mode. The Strike Suit is considerably faster in pursuit mode, and a bit easier to fly, and it was significantly faster. So collecting flux and zipping about on the one hand, and transforming to absolutely unload on on some poor souls on the other. While my instinct was to stay in strike mode as much as possible in the early going, I could see how there were at least some perks to pursuit mode, and I found that bouncing between them had a rationale to it, and an element of strategy: do I use up my flux to wipe out the numerous fighters, or save it for use against the capital ship? 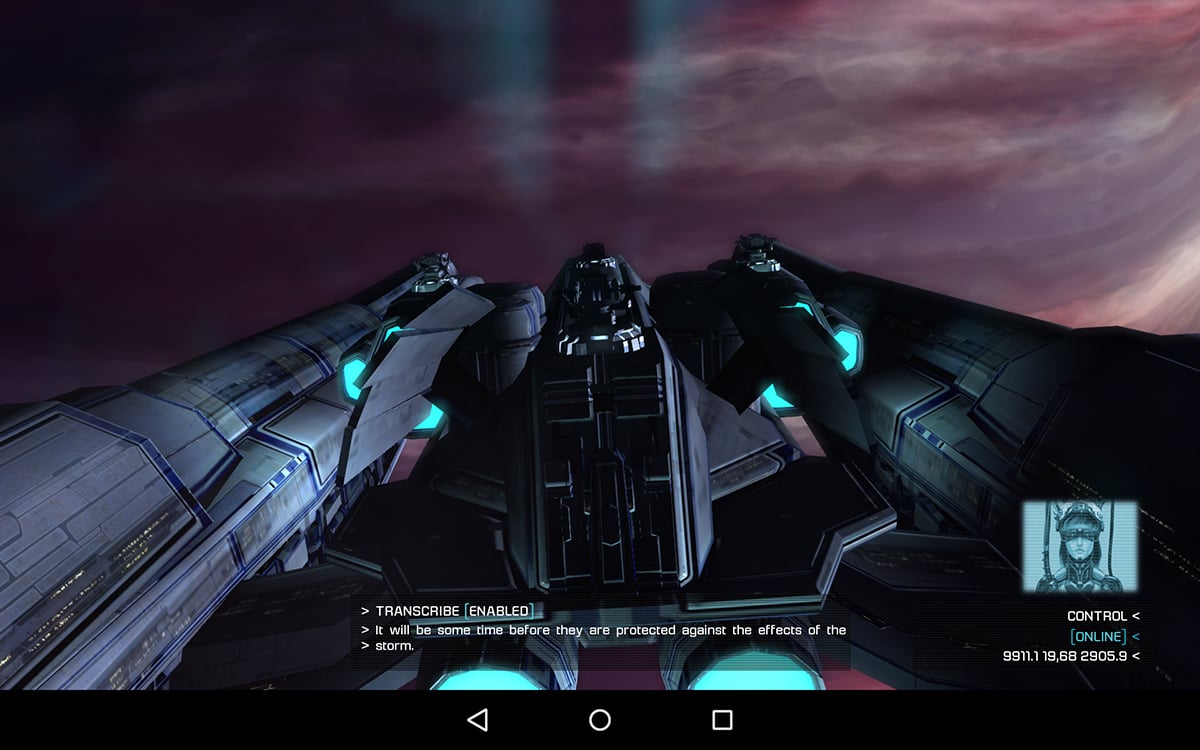 The classic slight on space sims are that they all look the same: boring. While that was true years ago when it was white spots as stars on a black canvas (and likely why it still isn’t that popular of a genre today), developers on the whole seem to have put more effort into improving backdrops to include large and nearby planets, nebulae, space stations, contrails from missiles and ships, and more, to liven up the appearance of outer space, and Strike Suit Zero is no exception. Most of the missions featured some phenomena in the background that really made the backdrop appealing for me to look at. One level required combat in a deep nebula (the no missile tracking one) and required dogfighting in a thick and purple haze that appreciably limited visibility.

Another instance was a large and reddish star in the background, that was a fiery menace behind all the combat. The level of graphics were good, and adjustable. I did notice that my Shield didn’t quite keep up with it on the highest setting, causing a small stutter here or there but those instances were uncommon; frankly, I was enjoying the graphics and opted to not dial them back the native 1920 x1104, though 1080 and 720 are also options. The game is a Tegra exclusive, so it’ll need hardware like the Shield, the Nexus 9, Nvidia’s Android TV or the Pixel C, or anything else that has a K1 or X1 inside. The soundtrack didn’t have a lot of variety to it, but I’d liken in to the type of music you’d hear during the dramatic points of an action movie. So, while a bit repetitive, it wasn’t a bad tune and fit the feel of the game.

On the whole, I found this game to be very enjoyable. The missions were of decent size, frequently topping twenty minutes per. Everything was organized and laid out in a straightforward manner, so really the only learning curve for me was the controls. The game’s graphics, style, and action were all great. This game is easy for me to recommend to anyone who likes space sims, space combat, and/or Sci-fi. I, for one, enjoyed it thoroughly.