I have always been a fan of fighting games. There are a few really good ones in the Play Store. 360 Studios is taking MMA Federation down a different path, making it a turn-based fighter… and it works. There is a lot of depth to this game from character customization, available moves, arenas and more.

Initially, I have to admit, that I was a little bit disappointed that the game was turn-based. I liked the graphics and art style when I first came across the screenshots. It reminded me a bit of Punch Out in some ways, but with a current day look. The character designs were a little bit over-exaggerated, but in a humorous sort of way. Once I started playing the game, I realized how much had gone into the design of the game, to make it a well-rounded experience. Having the ability to customize your character, different arenas available, fighting moves, a training arena where you earn belts, career mode, and the ability to play others online, make MMA Federation an enjoyable game. Since the game is turn-based, you will have to plan your moves, and anticipate what your opponent may throw your way. 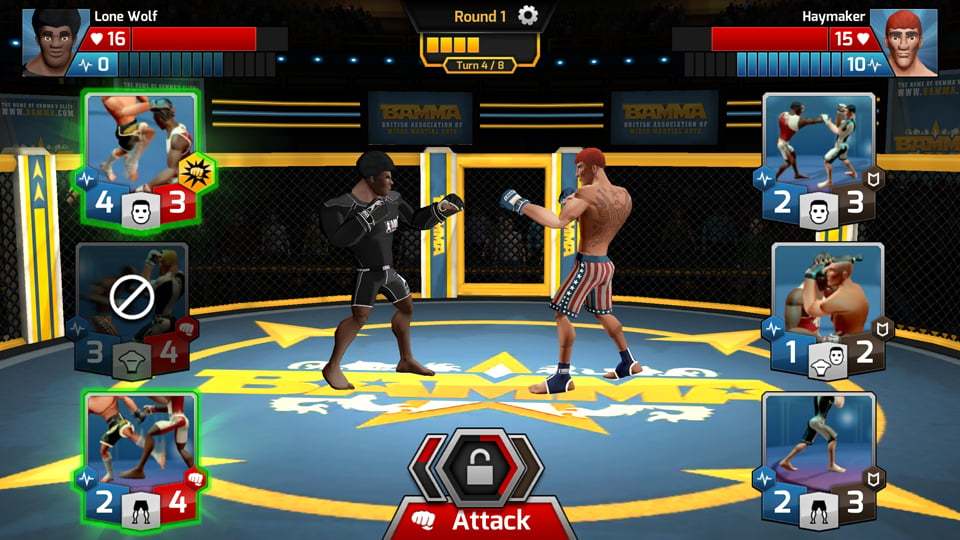 Turn-based gameplay is actually what makes the game a bit more enjoyable to me than some of the other fighting games available in the Play Store. After spending a fair amount of time creating my character Lone Wolf (You can choose from a group of names.), I was taken through a good tutorial that explains the basics of the game. By the way, you can have up to three different fighters on your roster. If one runs out of energy, (Yes, this is a free to play game.) you can simply choose one of the other fighters you have set up in your roster. It is a nice way to extend your gameplay without the worries of running out of energy. During my time playing the game, I never felt like the energy bar was a problem, because it refills when you win and level up, etc. I didn’t feel the need to have other fighters to extend my gameplay, but will add two more fighters because there is a variety of fighting styles to choose from, as well as the character customization.

MMA Federation feels pretty cerebral to me. It is a fighting game where you really have to think about how you want to execute your limited number of moves in each round. As I mentioned before, there is no button mashing here, unless you get knocked out. Then you have to tap the screen quickly, to get your fighter to get back up. There are defense moves that have counter-moves attached to them, so if you do block your opponent’s move, you have the opportunity to deal a blow at the same time. 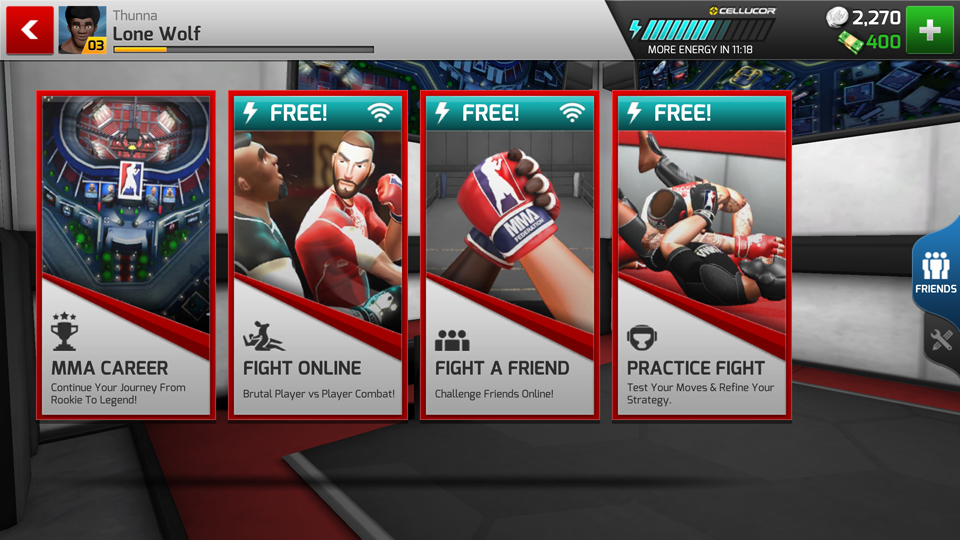 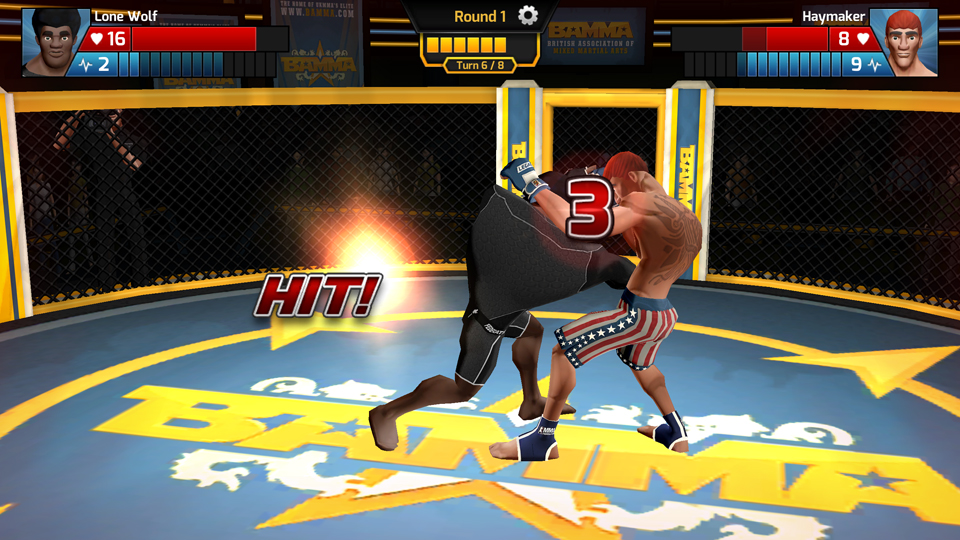 Each player has three different attack and defend moves to choose from. Each move has hit points and they also require a certain amount of stamina. Each turn your stamina is replenished. If you have enough stamina, you can actually stack your moves and have two moves in one turn. This is helpful if you are trying to take out a fighter with a fair amount of hit points. I like the strategy that is involved in this part of the game. It is almost like playing Hearthstone. I know that is a loose comparison, so don’t torch me in the comments section. The different moves available remind me of the different cards you have in a game like that. The more you train in the arena and level up, the more moves (cards) you have available to you.

The graphics in the game are sharp, from the rendering of the characters, to the different arenas. Even the game map is well designed. When a fighter is successful in landing a blow, there is a colorful arc that appears like a power-up hit. I think the art direction is well balanced when it comes to the accuracy of the fighting style/moves, with the fun that is to be had by seeing more whimsically rendered characters fighting. It is a good balance between an arcade game and a fighting simulation type of game. Though MMA fighting can be quite brutal, you don’t have to worry about seeing cut eyelids and swollen faces in this one. If your fighter does successfully perform a KO move, depending on what it is, he goes into slow-motion performing it. 360 Studios has put the right things into the game to make it feel more immersive. The arena has a pretty good announcer, the crowds are cheering, there is a fly-through animation going into the arena, and of course there has to be music, right? 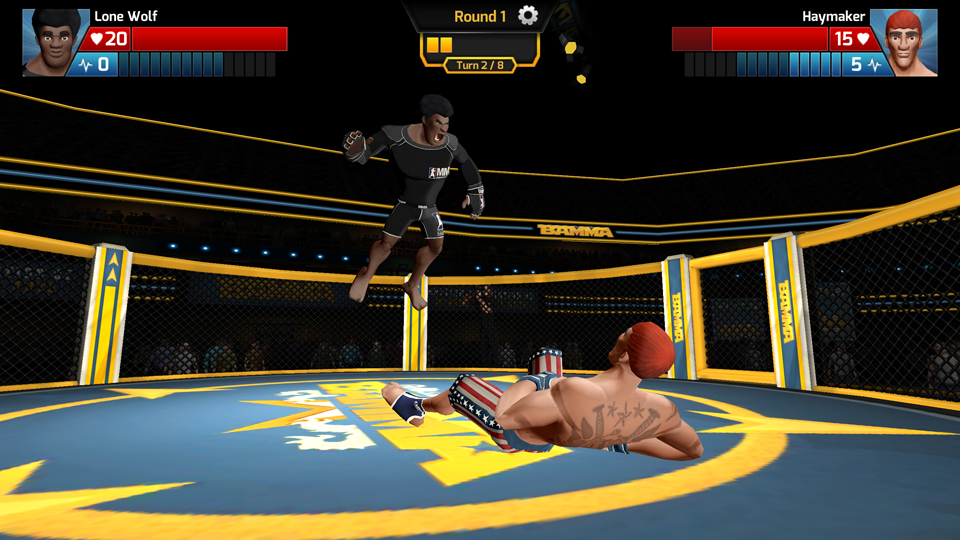 MMA Federation is integrated with Google Game Play Services with 14 achievements to be unlocked. The game is free-to-play with optional in-app purchases. If you are looking for a good fighting game to play that has a different style of gameplay, MMA Federation is worth downloading. If you enjoy MMA fighting, then you owe it to yourself to check it out. It looks more arcade-like in the design of the characters, but the moves and strategy involved in the game, will make you appreciate the skills involved in true MMA fighters. 360 Studios has done a really good job crafting this fighting game, and it is a good addition to the genre of fighting games available in the Play Store. Just keep in mind… button mashing won’t help you win fights in this one. It is going to take skill and planning. Are you ready to step into the ring?