Ubisoft is a gaming behemoth when it comes to creating and publishing games. They continue to produce excellent games for consoles and mobile devices. Their latest entry comes from a classic cartoon that was popular when I was much younger. The Smurfs first appeared on Belgian TV in a series of short animated films. It wasn’t until a film that was produced in 1975 by Belgian Belvision Studio, that the Smurfs gained great popularity. The rest you can say is history. The Smurfs Epic Run is now available to play on your mobile device.

If you have ever watched the cartoon, you can’t help but like the adorable blue creatures. Each Smurf is known for their ways. Everybody pretty much knows Papa Smurf and Smurfette. In The Smurf’s Epic Run, you will have the opportunity to play most of the more popular characters from the cartoon. The game is an auto-runner/side-scrolling platformer. It is akin to The Rayman Adventure game that was recently released by Ubisoft late last year. The artwork is just as impressive, and the gameplay/mechanics work perfectly. If you enjoy platform type games, then it shouldn’t be too hard to decide to download this game. 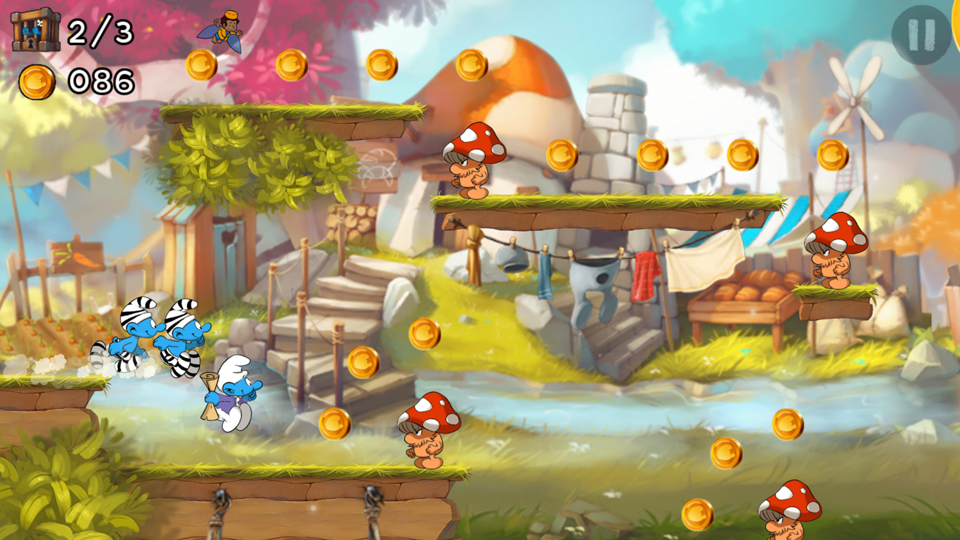 “Gargamel has cast an evil fog spell to capture all the Smurfs. The whole village is gone and you’re the only Smurf left! Run away from the fog, parkour a vivid world, gather powerful magic artifacts and save all your Smurfs friends to become the true epic hero of the village.” – Ubisoft

If you have played auto-running games before, then you will be familiar with how this game controls. You primarily tap the screen to jump at the right time to avoid obstacles. Based on the character that you are playing, you may have the ability to dash or glide or so on. There are a lot of obstacles and dangerous elements that Gargamel has placed in the village. If you stumble over one of the obstacles, you will find the pink evil fog spell catching up to you. As you traverse through the village, you will find some of your Smurf friends locked in cages. All you have to do is run into them to free them. Once you do, they trail behind you as you are making your way to the end of the level. If you free a legendary character, you then have the opportunity to play as that character in the next level.

Each Smurf that you free has different abilities. You have the option of switching out the Smurf that you use before each run. This is where the free-to-play structure of the game comes in. To use those different characters, you will have to spend coins.  Fortunately there are a lot of coins hovering about in each level. As you level up your Smurf, you are given additional coins. Coins are also given for completing daily challenges or reaching certain goals. The use of gems in the game is also part of the in-game currency. More powerful items are unlocked using gems, and they are a little harder to come by.

There are plenty of levels to play in the game, so you won’t get bored with this one. Each of the level designs are different, and since the artwork is so well-done, you may get distracted looking at the visuals. 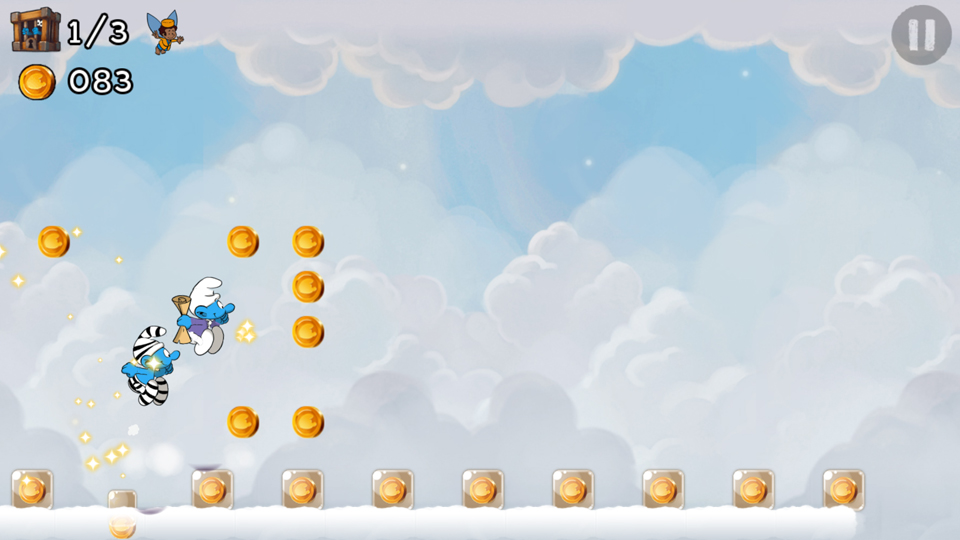 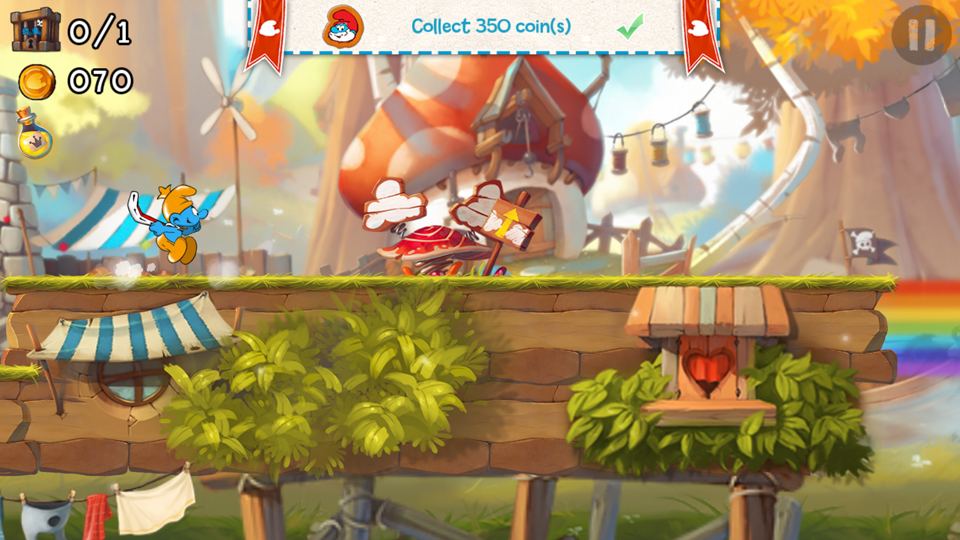 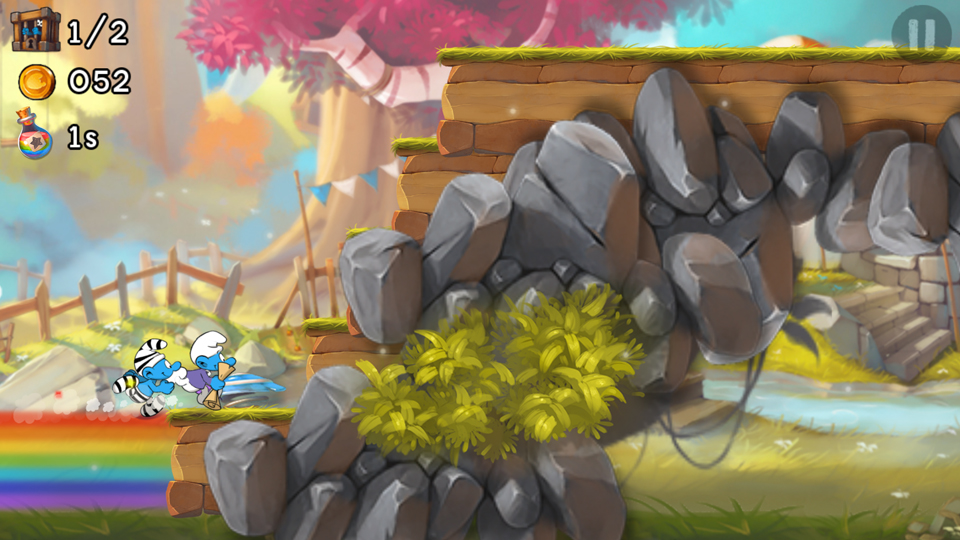 Being a free-to-play game, the usual energy bar is present. It slowly refills over time. You are given additional energy for leveling up and completing courses, so your gameplay time doesn’t feel too limited. The game is integrated with Google Game Play Services and has a whopping 79 achievements to be unlocked! To compete against other players though, you will need to link your Facebook account. This isn’t too problematic, but what I have noticed is that prior to each level, there is a check box that is always checked to share the information with whoever you have given the game access to. Most people probably won’t notice this, but it is the reason I get annoyed a lot of times with people on Facebook, because they probably don’t know their game is sending messages out asking you to play Candy Crush. Most of these things can be handled with permissions, but you still may want to uncheck that box at the beginning of each level.

If you enjoyed playing the latest Rayman game, then this game is similar in some ways. The artwork is great, the controls are good, and the platforming elements can be challenging. Keep in mind it is free-to-play, and it does have optional in-app purchases. The purchases seem to be more cosmetic, rather than necessary, to enjoy playing the game. The link to download the game can be found below, as well as a brief trailer of the gameplay. There is a lot to like in Smurfs Epic Run. The high-quality of production with Ubisoft games continues with this one.