Have you ever played a game of Dungeon and Dragons? If you have, then you may be excited to hear that Dropforge Limited, has brought the popular game, Loot & Legends to the Play Store. If playing fantasy driven board games is something you enjoy, then Dropforge Limited wants you to still have fun, but on your mobile device. Currently this one is only available for tablets.

There have been a few really good entries into the Play Store that take a board game like setup, and turn it into a digital game. Not too long ago, Card Dungeon by Playtap Games was released. If you play games on your PC, then you are probably familiar with Card Hunter too. You can still play that game online, but if you want to play it away from your PC, they have made it easier for you. Hence the release of Loot & Legends. Loot & Legends made it iOS debut several months ago. Many people have been waiting for its arrival in the Play Store. Now that it is here, a lot of people will enjoy being able to download it, and play it for free. Yes, the game is free to play. There does not appear to be a one-time price to unlock the game. If you tend to stay away from free-to-play games, then I guess you can stop reading here. If you don’t mind giving a free-to-play game a try, you will find that Loot & Legends is a game that is fun, easy to learn and very well put together. 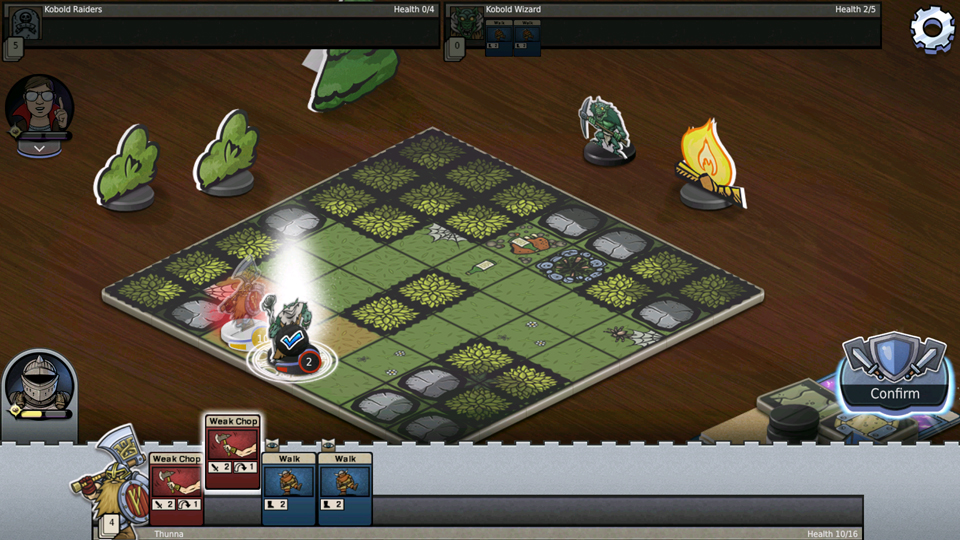 An epic tale of Adventure, Glory and Pizza! Take a trip to a time when battles were set atop tables and magic was limited only by your imagination! Collect powerful cards to crush your competition in an immersive cardboard universe! Forged from the award-winning PC game Card Hunter and designed with Richard Garfield, creator of Magic: The Gathering, Loot & Legends takes you on a hilarious journey filled with pop culture, sibling rivalry, and pizza delivery romance! – Dropforge Limited

The game does an excellent job of walking you through your first battle and giving you a tutorial at the same time. This continues for the first few levels. As you play more you will find that the game has plenty of humor, depth and pretty decent graphics. The fact that this is set up in a papercraft world makes it even better. As much as possible without rolling the dice, you feel like you could be playing a board game, but with special-effects. One of the things that I wish would be implemented, is an opportunity to zoom-in on the board. I have mentioned this in previous games, but it helps a bit to be able to see more, and zoom in on the action. Especially since in this case, the cards that you are given, and the text on that appears on them, tends to be a bit smaller than usual. You can tap a card and hold it. Doing so enlarges the card, so that you can see the attributes of the card. This is helpful, but I would like to have greater flexibility over the control over the screen. I can see why this is for tablets only. If it worked on phones, you would definitely need the option of zooming.

Each player has multiple players they can have in their party. As you traverse through the different levels/environments, you gain skill for your players, so they can be leveled up and of course, gain loot and equipment along the way. Equipping your different characters and leveling up their abilities is done easily, primarily through a split-screen. It is easy to go through your stash and then equip your character with it. You can name each of your party members or go with the name given in the game.

Loot & Legends is a turn-based game. There aren’t really any controls to speak of. You tap the screen to select your cards and tap the screen to tell your player where you want them to move, and tap the screen to end your turn. Each player has a few cards in a given round. You will gain more cards as you traverse through the dungeon and fields of battle. You continue to build your deck over time, and are able to decide which cards you will take into battle before each level. 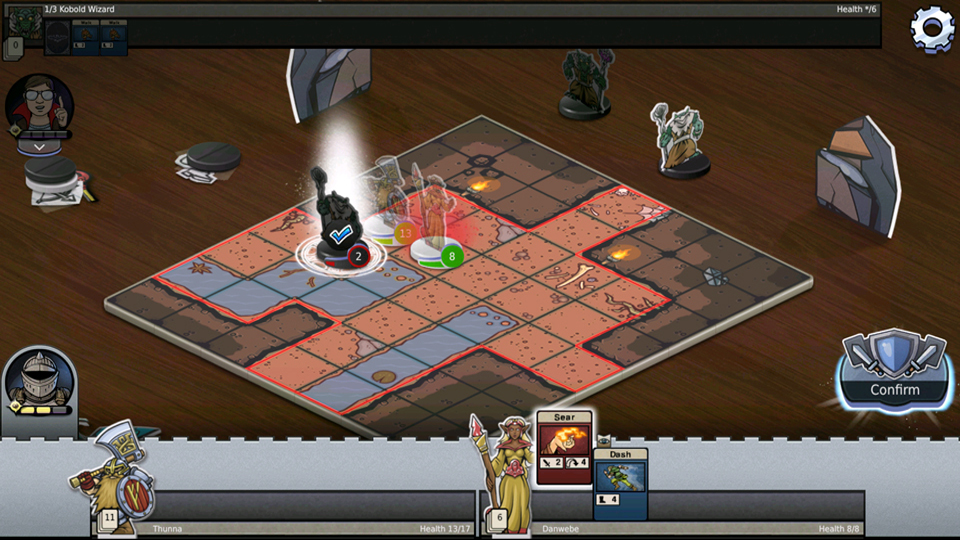 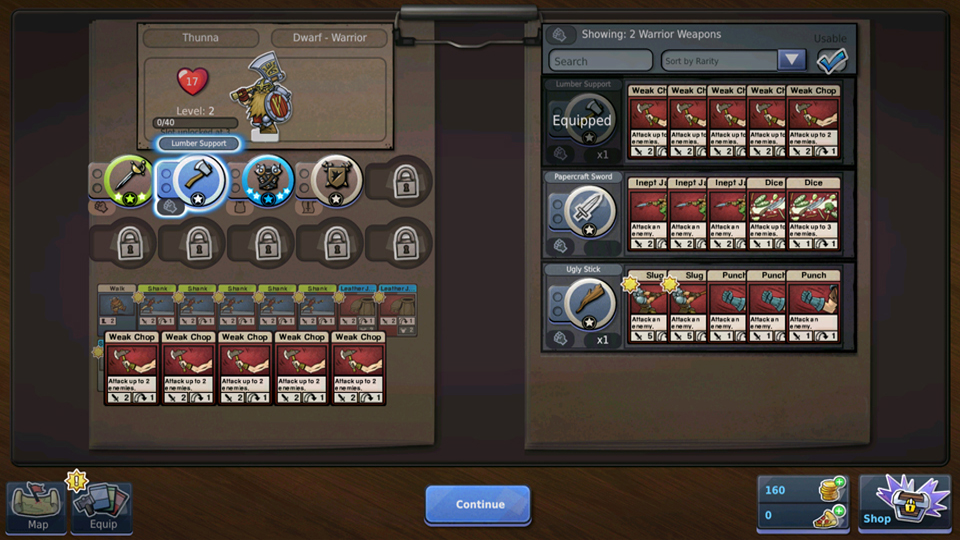 You will encounter beasts, wizards and a whole host of characters as you move throughout the game. I mentioned humor earlier. The Dungeon Master appears every now and then, as well as other characters that are playing the game with him, to give you direction. A Pizza Girl stops by the house while you are playing, but I guess you don’t want her to know you are playing games. Pizza serves as part of the currency in the game. When she drops off pizza, it can be used to open chests which have loot in them.

Loot & Legends was just released a couple of days ago, so I am just diving in and testing it out.  So far, I like what we see. The game does not appear to be integrated with Google Game Play Services. This would be a nice addition, as I can think of many cool achievements that you could unlock during gameplay. Especially since this game has a sense of humor and style all its own. The game is free-to-play and gives you an option of joining the Loot Club. Being a member of the Loot Club allows you to unlock Loot Club rewards in loot chests for one day or one week. The Loot Club also gives you bonus arena points and more loot in chests. It appears the only way to pay for this is using Pizza. You are given pizza when the Pizza Girl arrives. So you may not have to come out of your pocket to pay for pizza. If you find that you do need pizza, you can pay real cash for it. The price starts at $4.99 and goes up four additional tiers, stopping at $99.99 I guess that would be the equivalent of a small, medium, large, extra-large and humongo-large pizza at the prices given. 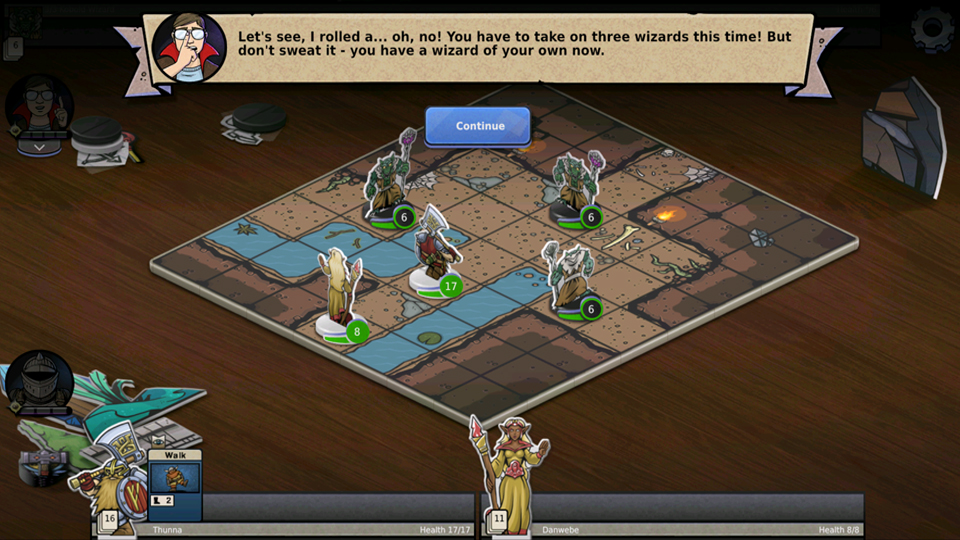 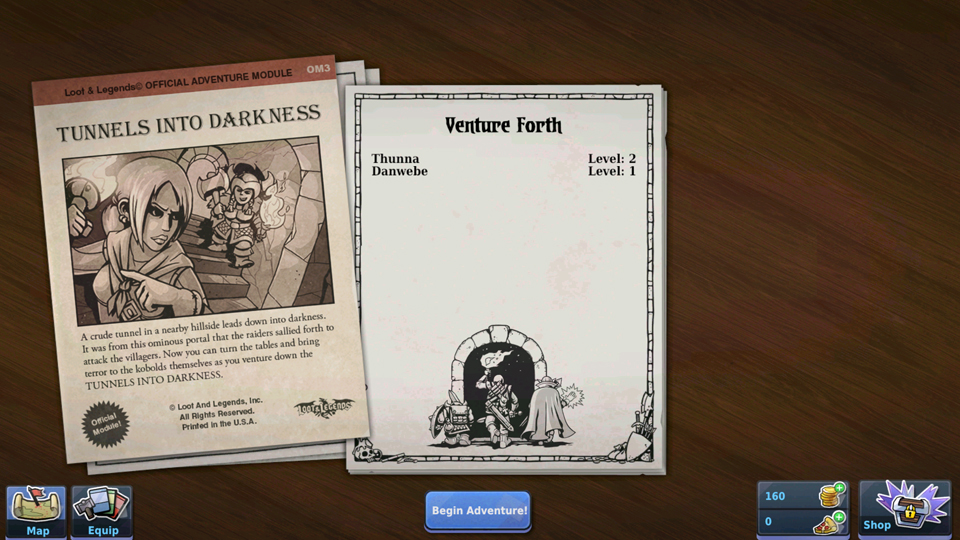 The game does require a network connection to play. The Play Store notes that the game has been optimized for Samsung Galaxy Tab S2 and the Nexus 9. I haven’t run into any problems playing on my Nvidia Shield Tablet. As the game hasn’t been in the Play Store for long, I am sure there will be other updates to the game that will make it even better.

I like what Dropforge Limited has done so far with Loot & Legends. If you were to compare playing this to a real board game, you will find a lot of similarities. I look forward to playing this one quite a bit. Ryan is our real board game enthusiast for Team DG. I am curious to know what he will think of the game. We will have more on Loot & Legends in a couple of weeks, to let you know how we fared in the game. Let us know what you think in the comments, if you have downloaded the game. Are you enjoying it so far?