Join Max in a delightful adventure. Sky Chasers is now available to download in the Play Store

Sky Chasers is an enjoyable game. It hearkens back to the days of playing arcade games, just to see how high of a score you can get. The game is created by independent game studio Lucky Kat Studios. Lucky Cat Studios is based in the Hague, Netherlands. The game is free-to-play in a good way, and has an adorable protagonist in Max. You can’t go wrong downloading this game.

There is nothing quite like firing up a game and upon playing the first few levels, being able to tell that the game’s creators made all the right choices in its design. The introduction is straightforward, the narrative is engaging and the controls and art direction are spot on. That is what you get when you download Sky Chasers by Lucky Kat Studios. The game’s heroine is Max. She wants to participate in a race. She doesn’t have a spiffy ship like her friends, but she is gutsy enough to create one herself… out of a cardboard box. Thus begins your adventure with Max, as she sets out flying through dangerous environments. 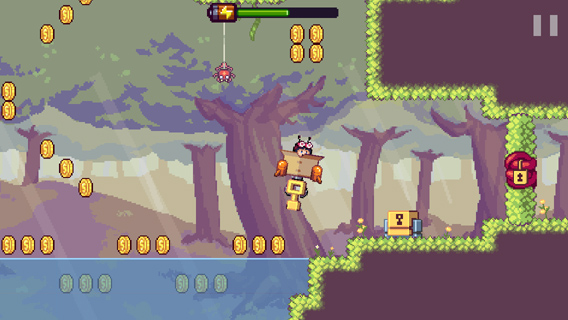 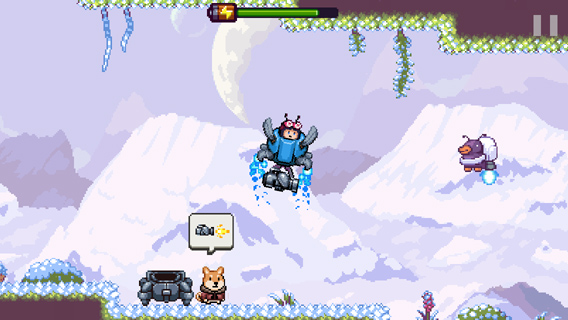 As young children, Lucky Kat Studios enjoyed playing Super Mario World and Lunar Landers. Sky Chasers honorably pays homage to those games in its art direction, controls and music. Upon your first glance of the pixels in the game, you are easily reminded of those games that were popular on the NES and SNES. A lot of people will feel a sense of nostalgia while playing this game, and who doesn’t love collecting coins?

The controls in Sky Chasers are very easy to use. You tap the left of your screen to hover left, and tap the right side your screen to hover and move right. If you release your fingers from the screen, the ship starts to fall. Once you get the hang of the speed of your ship, it makes things easier. Don’t worry, you can also switch out your ships. Max will encounter a lot of different enemies on her journey. There will be spiders, thorns, flying pumpkins and a host of other enemies. All she has to do is avoid the enemies and obstacles, and collect coins. Her ship only has so much energy, so it is important to make it to the landing port before the ship’s energy runs out. This is where you will be introduced to the free-to-play structure done right in this game.

There are a lot of gamers that complain about free-to-play games. In many ways they are right, there are some games that use that infrastructure or monetization strategy poorly. A lot of gamers won’t even look at free-to-play games. If you did that with Sky Chasers, you would really be missing out on a good game that implements free-to-play well. What do I mean by that? I mean free-to-play with options. In Sky Chasers you have save points in the game.  They are the landing ports. When you make it to a landing port you can choose to save a number of different ways. It may cost you twenty-five coins or more, you can watch an ad, or you can have endless save points for $2.99. It really doesn’t get any better than that. You collect so many coins throughout your flight, it is easy to use the coin method. Now, as the levels get more difficult and you are running into enemies that make you lose coins, it can be a bit more challenging. If that doesn’t work for you, watching an ad is an easy thing to do. Since Lucky Kat Studios provides multiple options, it leads me to believe that they are trying to please as many gamers as possible. Multiple options in a free-to-play game doesn’t go unnoticed or unappreciated. 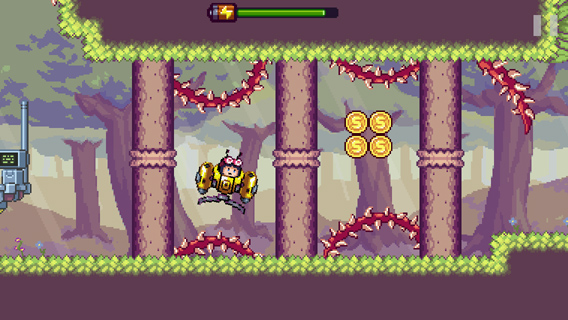 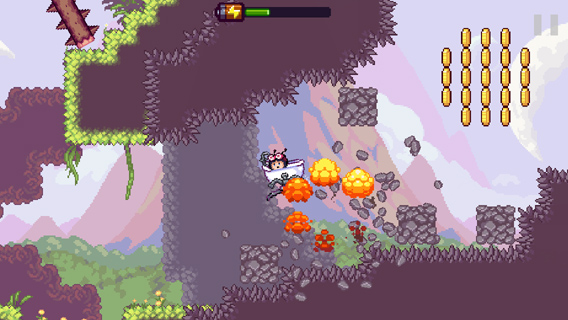 Sky Chasers is integrated with Google Game Play Services with 14 achievements to unlock. The game is free-to-play with optional in-app purchases. The game is fun and has an engaging storyline, but it is also challenging. There is a lot of game to play here and Lucky Kat Studios says there will be future downloadable content too. If you are a fan of classic NES or SNES games, you should take a look at Sky Chasers. Taking Max on here journey will definitely test your piloting skills, but you will have plenty of fun along the way.