LEGO has a large number of games in the Google Play Store. Of course, the games based on Batman, Indiana Jones and Star Wars series are quite popular. The other series that has a large following is Lego Ninjago. The latest game to be released in that series is Ninjago Skybound. It is a stealth/platforming game that is fun to play, has great graphics, and one-button controls. If you enjoy LEGO games, this is a good one to check out. One of the best things about it is that it is free to play, and there are no in-app purchases.

Ninja continue to be a popular character choice in a lot of games. If you like action games, throw a Ninja in there and it immediately becomes a more exciting game. Well, not necessarily, but you get what I mean. There is something mysterious about playing a dark clad figure that leaps into places secretly and disposes of enemies quickly. 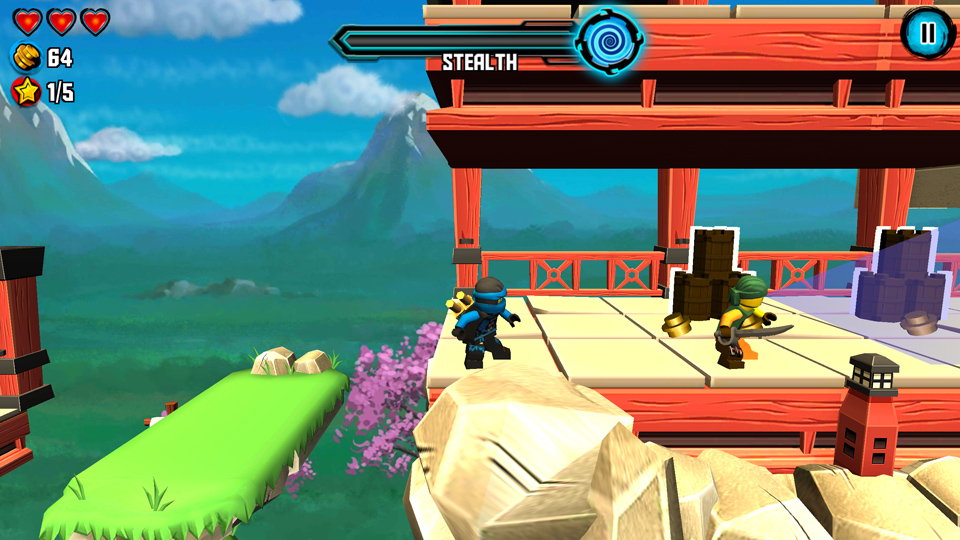 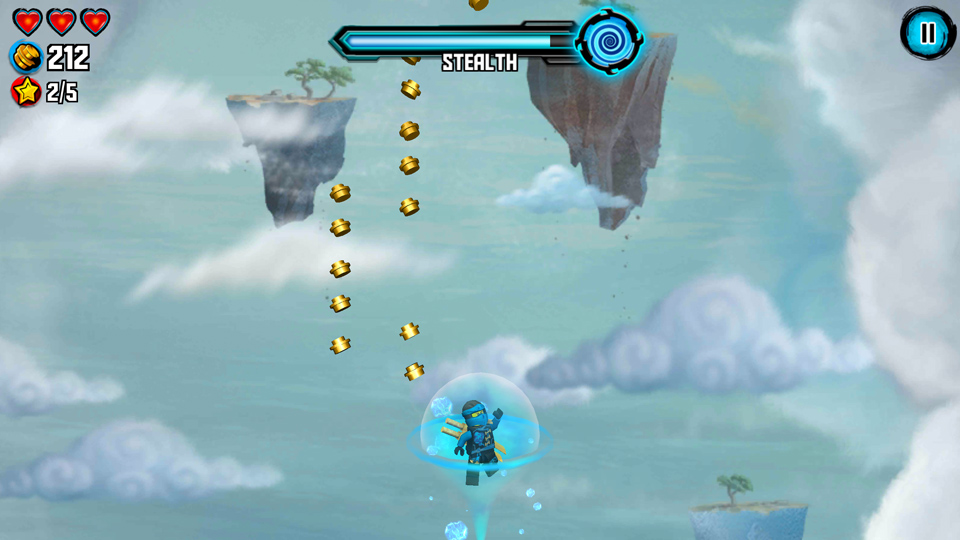 The evil Djinn Nadakhan is stealing parts of Ninjago Island to rebuild his realm of Djinjago in the sky. Playing as Jay you must battle him and his gang of SKY PIRATES to rescue Zane, Nya, Lloyd, Cole and Kai to take back the stolen lands and rebuild Ninjago. – LEGO System A/S

When you are playing LEGO games, it is more about collecting studs or the different pieces that are located throughout the levels in their games. LEGO Ninjago Skybound is no different. There are plenty of pieces to be collected in each of the levels. What makes this game more intriguing, is the ability to use stealth. There are certain objects in the game that you can hide behind. Each of the enemy has a range of what they can and cannot see. It is a cone of vision that is shown in front of the enemy, as they walk back and forth on each level. If you can hide behind a pot or some other obstacle, or outside of the enemy’s cone of vision, you are in stealth mode. Once the enemy passes you, you can sneak up behind them and take them out quickly. It gets pretty challenging when you have multiple enemies on the screen, but it is also part of the fun, and tactical strategy you must learn.

The levels in Skybound are large. There will be a fair amount of scrolling to get through the level. The levels are long and have depth as well. You will be traveling up high and then sliding down walls to lower levels. The level design is impressive and there is quite a few things going on in the background. Flying ships and dragons lazily pass by, as you are attempting to scale a wall or knock out one of the guards.

Skybound has a good story that goes along with the game. Can you enjoy playing the game without it, you probably could, but it helps to round out things a bit. Exploring the levels and rescuing your friends is really what this game is about, and everyone in your family can enjoy playing it. 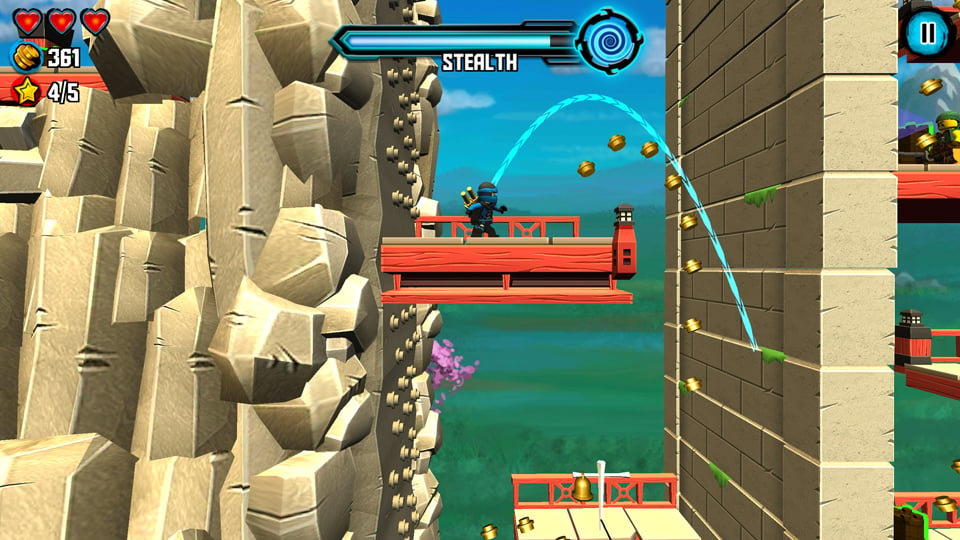 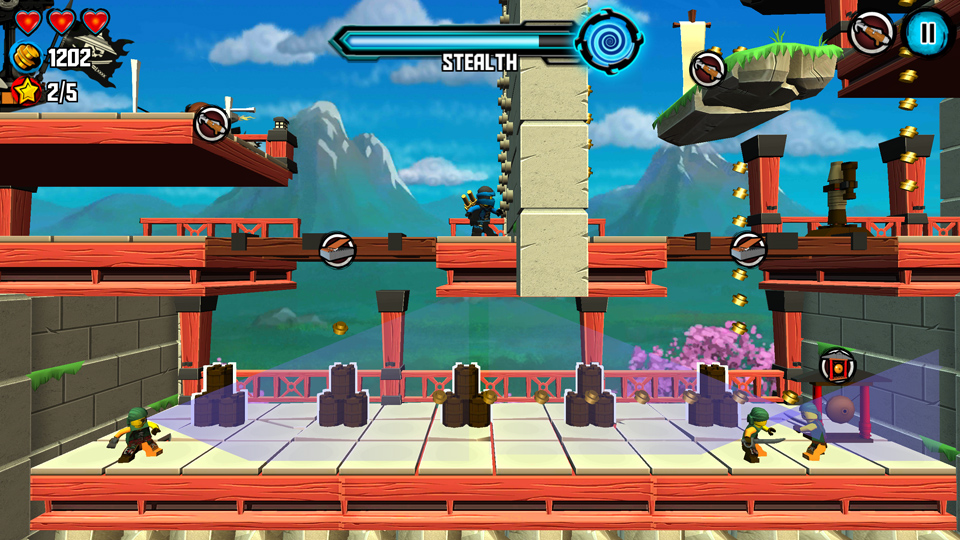 If I had to pick one thing that I wish were better, it would be the controls. The control is primarily a one-button touch control scheme. You place your finger on the screen and a light blue arc appears. Since Ninja are known for jumping, it allows you to jump from one place to another. The mechanic can be a bit frustrating to use, because at times, it is hard to aim where you want your main character to go. Think of the Angry Birds mechanic, but being able to aim in both directions, as opposed to one. Many times I would try to jump to an area, only to fall and have to start over again. After playing the game more, you do get used to it, but I can’t help but wonder if there is a better option. Once you have aimed where you want your character to go, and he lands on the ledge, he hangs there, until you tap again to get him to pull up. If you are trying to hide behind objects, or sneak up behind an enemy, all you have to do is tap the object to hide behind it, or tap just behind the enemy to get your character in place for the stealth takedown. The controls are definitely not a deal breaker, but I think they could be tweaked a bit.

LEGO: Ninjago Skybound is a good game to play with a fair amount of depth. The Star Wars series and the Indiana Jones series are probably my favorite LEGO games I have played in the past, but Ninjago Skybound comes in to round off my top three. Fans of LEGO games should check this one out. Ninjago Skybound is not integrated with Google Game Play Services. There are however, three different save slots that you can use. The game also has in-game achievements, with 24 achievements to unlock. If you are ready for some high-flying Ninja action, it is easy to recommend downloading LEGO: Ninjago Skybound. You really can’t beat free-to-play with no in-app purchases. It is something you see rarely these days, so get in on the action.