Half-Life 2 Review: A classic shooter that still holds up today 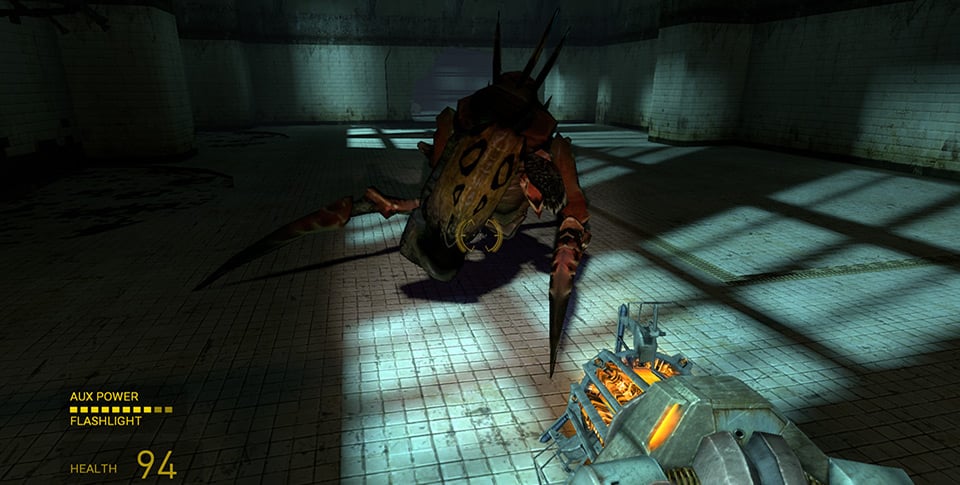 Released by Valve, Half-Life 2 is an icon of voodoo gaming as a whole, not just its genre of First-Person Shooting. The game is available for weekday I believe is anything running Nvidia’s SOC, and outright requires a controller to play. Never having played a Half-Life game before, I was quite excited at the opportunity. I’ve spent the part few weeks playing through this game, and this is my review.

The protagonist for the Half-Life franchise, as well as its face, is that of Gordon Freeman, and I assumed his role for the entirety of the game. The story for this game is one that’s heavily steeped in science fiction. This game picked up where its prequel left off, and opening with a sequence of Gordon being spoken to by a mysterious character, only to awaken on a subway heading for City 17, which is located somewhere in Eastern Europe. This place is completely overrun and occupied by the invading force known as the Combine, who are an aggressive empire from another dimension. Shortly after disembarking, I meet up with a member of the human resistance, and embark on my journey as Freeman from there. As the story progresses, you meet up with some of the characters from the original Half-Life, as well as get your arms around who this game’s antagonist is. 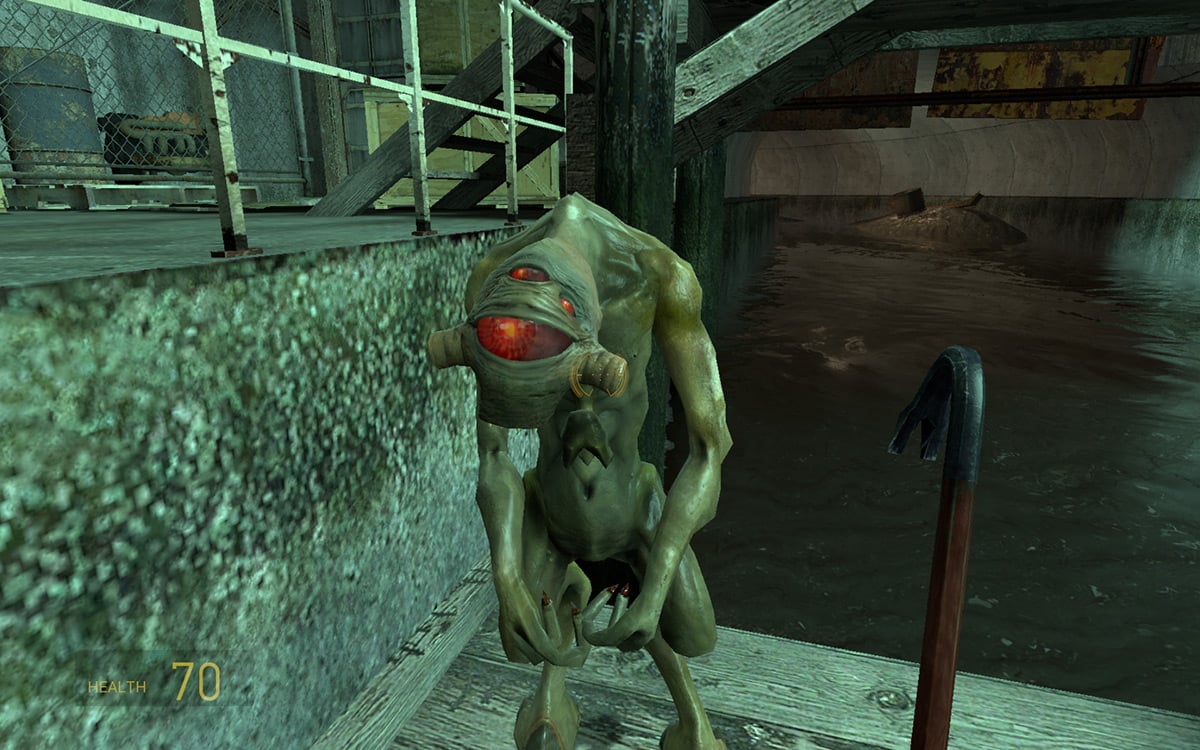 The narrative touches on a few different points, from teleportation devices, to aliens (both hostile and friendly) from other dimensions, oppressive government (by aliens), and even an underground railroad of sorts, as all the people and aliens that are part of the resistance are attempting to assist Freeman on his journey. All told, the story was good. What I learned as I Googled around about the game, was that how the story was told was somewhat groundbreaking, in that the characters looked me in the eye and spoke to me. With the state of modern gaming, this is taken for granted, but apparently this was one of the early games to take advantage of this mechanic. Kudos to Valve for being so forward thinking, back in 2004, when it debuted. I only have gripe about the story, and a small one at that.

Half-Life 2 doesn’t offer any sort of recap. Now, in Valve’s defense, this is a sequel and I take it that the devs assumed that players would have already completed the first game and thus have context for this one. With this being my first foray into the franchise, I was lost as to what the larger story was. So if you’re new to the franchise like I was, Google is your friend here if the story is important to you. With the game being around for more than a decade, there’s ample reading and viewing material out there. And while not spoiling the ending, it sets up its sequel, so everything isn’t tied up in a neat little bow. I guess my takeaway from it was that I found it enjoyable, but at times characters would reference things for which I had no understanding. 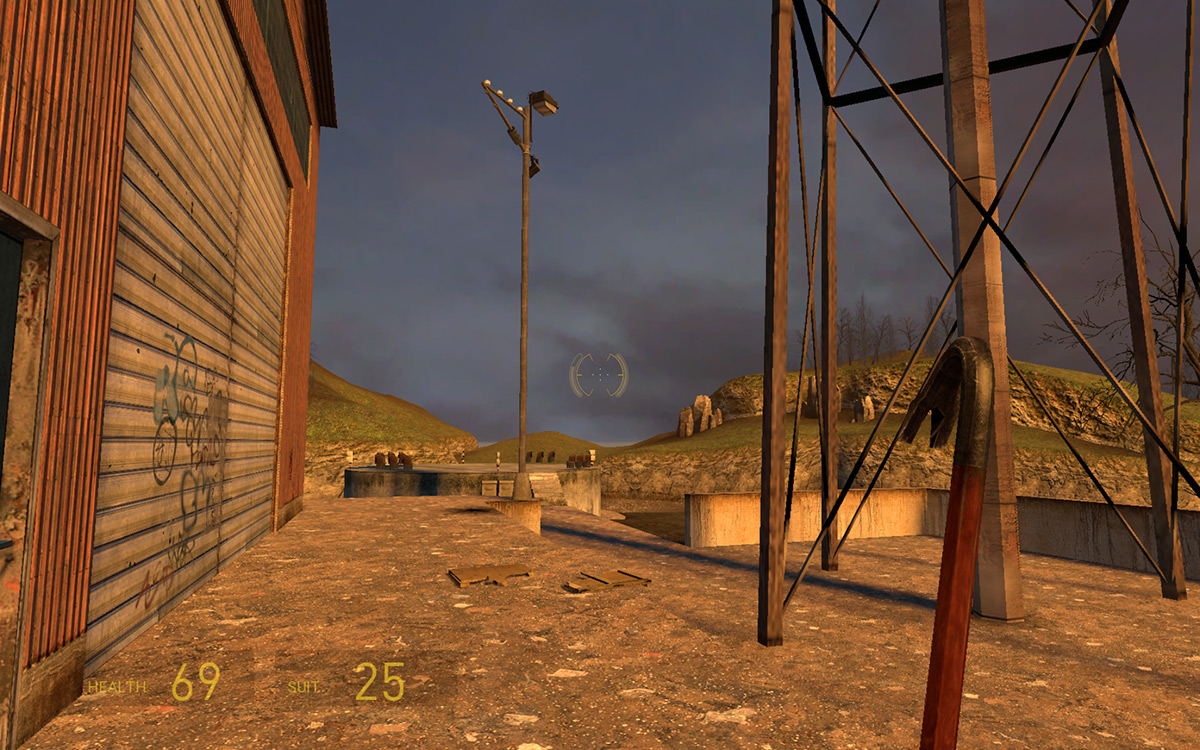 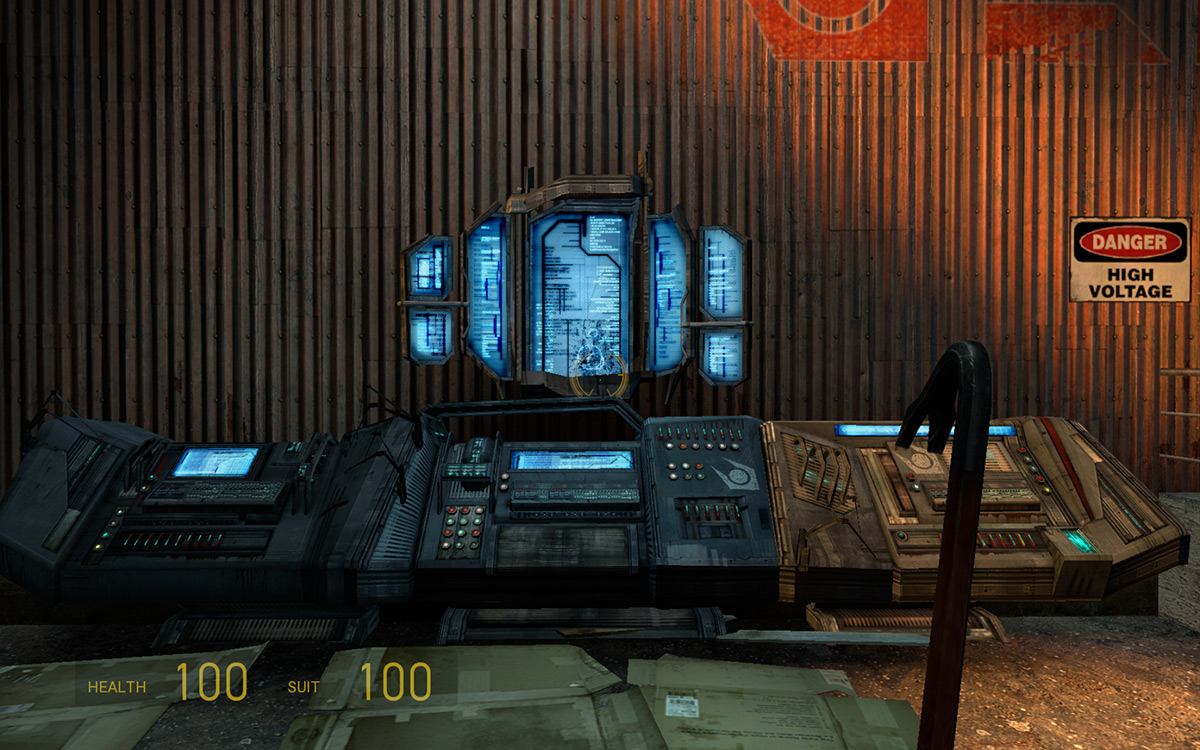 The gameplay of Half-Life 2 is solid, and a shooter through and through. It’s not as simplistic as say the early Doom or Heretic games of yore (red key opens red door, to reveal blue key, etc), it’s largely just killing things along a predefined path while occasionally being spoken to about where I am or what I’m supposed to do next. But despite the fact that, in some ways the game shows it’s age of 11 years, the flow between action and NPCs “dialoguing” with you (Gordon never actually speaks in this game), it works and works WELL. And speaking of the action, this game has it in spades. Not only did I run around and generally cause mayhem by shooting things with close to dozen different weapons, but there were times I went though zombie infested parts of town, rode an armed jet ski, drove an armed dune buggy, used shoulder mounted rocket launchers that I guided with a laser sight, and more. If you like action, there’s plenty of it in this game to keep you from betting bored.

The settings/locations were varied as well, ranging from the seashore, to urban buildings, to the inside of a castle, to a nasty sewer (with the jet ski), and more. There was also a great variety in the kinds of enemies I encountered, ranging from humanoids in SWAT armor, to quadrapedic “spiders” that mimicked Face Huggers from Alien, to giant walking mechs, to flyers, to the zombified humans, giant insects, and so on. I seemed to encounter different combinations of enemies in each of the different environments, so you’d face one kind for a while, then the entire makeup would flip (enemies and setting), and you’d have to adjust a bit. Valve did a good job shaking things up every so often. And while  the action is the focus of this game, that’s not to say that there aren’t puzzles. I found on a few occasions that I had to move objects around, found in the nearby environment, in order to progress through the game. For example, I might have to cross a chasm that is just too wide to jump, so I would need to find a plank to lay across it. At other points, it might be stacking boxes in order to climb up them. Nothing complicated, but it was nice to experience them, and see how they fit into the environment.

Lastly, I’ll touch on the firepower. Gordon amasses a variety of weapons through out the game that include the staples such as a pistol, shotgun, machine gun, grenade, and the iconic crowbar for close up work (be it alien flesh, or wooden obstruction). Beyond that, you appropriate an alien machine gun, a rocket launcher, a crossbow of sorts, and the gravity gun, which allows the player to navigate objects easier than without it, as well as use it like a weapon at times as well. All told, it they all served a different purpose and were fun to use. 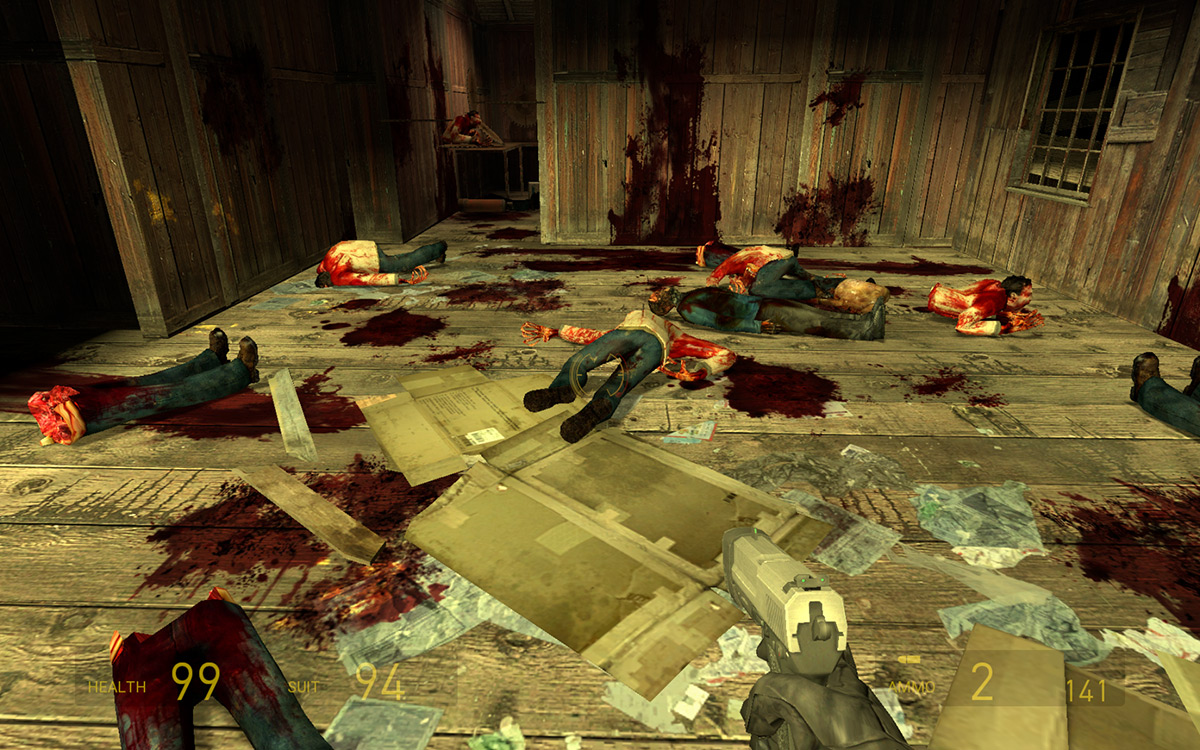 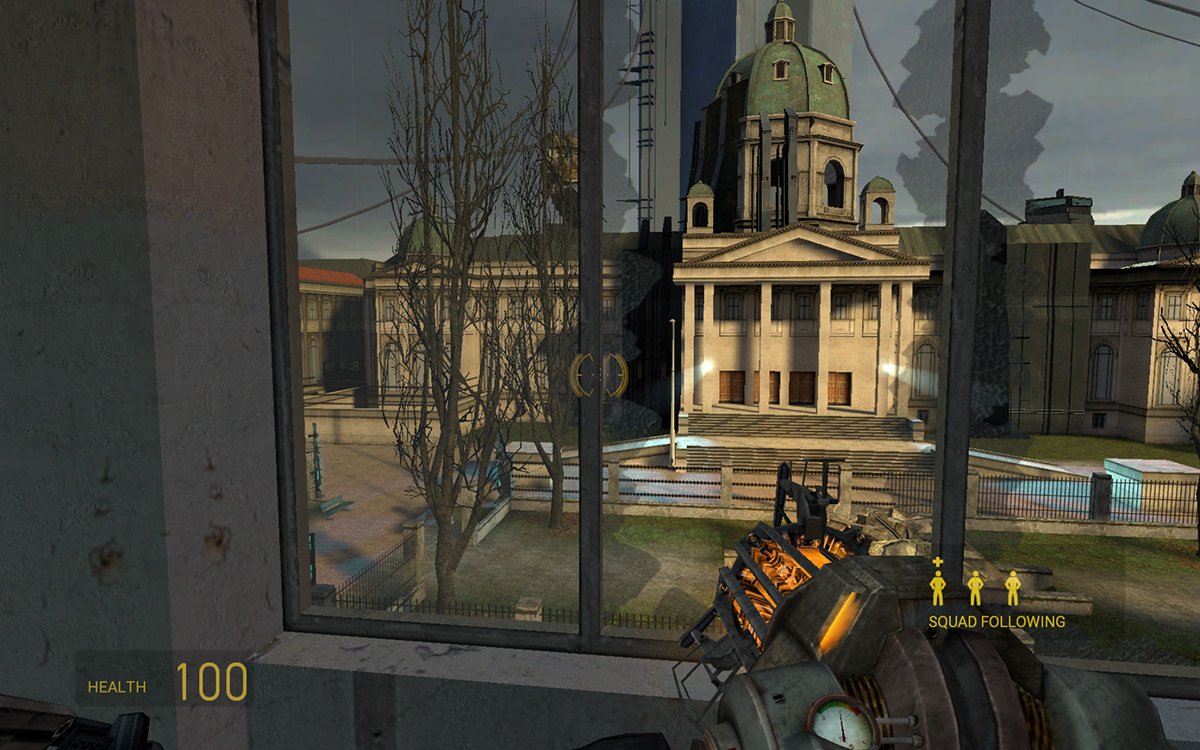 The game requires a physical controller, and there’s no way around it that I saw. I played the game using Nvidia’s Shield Tablet and their complimentary controller. With that rig, the thumb sticks were used for navigation, the cross pad for swapping weapons on the fly, and the physical buttons for functions such as jumping, interacting with objects, and reloading. Once you get them down, it works just fine. The graphics for the game looked good, but it wasn’t difficult to see that they were dated. The angles looked a little too sharp at times, and surfaces appeared a touch flat at points as well. All told though, they looked solid in this game, and like the control scheme, once I got used to them, they were good enough and ran smoothly just about all the time.

The game was also decent about not sticking me, as a player, in an untenable situation. More than once, I had to take down large machines with the rocket launcher that only holds three rockets. Some enemies require more than three to take down. Every time I was put into that position though, a cache of rockets was always nearby. How near is debatable, but it was always there. Same goes for confusing parts of the game to navigate. There was always a way up or down, if the fall didn’t kill me (in which case I wasn’t mean to take it). As for the sound track for the game. It came and went as the game went along, and largely was comprised of industrial or electronica. It was never out of place. The game caps out at seven save slots. So if you’re into using multiple slots for one full run, you’ll need to take that into account.

I do have a couple of gripes about the game, but they’re technical in nature. First, the game had frequent loading screens at some points. Along with when I saved or loaded, the load times are generally slow. Open the game… wait. Load your save… wait. Complete an area… wait. Die?… wait. At times, it would take a good minute or two (or at least felt like it). I’m not sure how much of that is from porting, and how much is “baked into the cake”, but it disrupts the flow and feel of things like nothing else in the game. 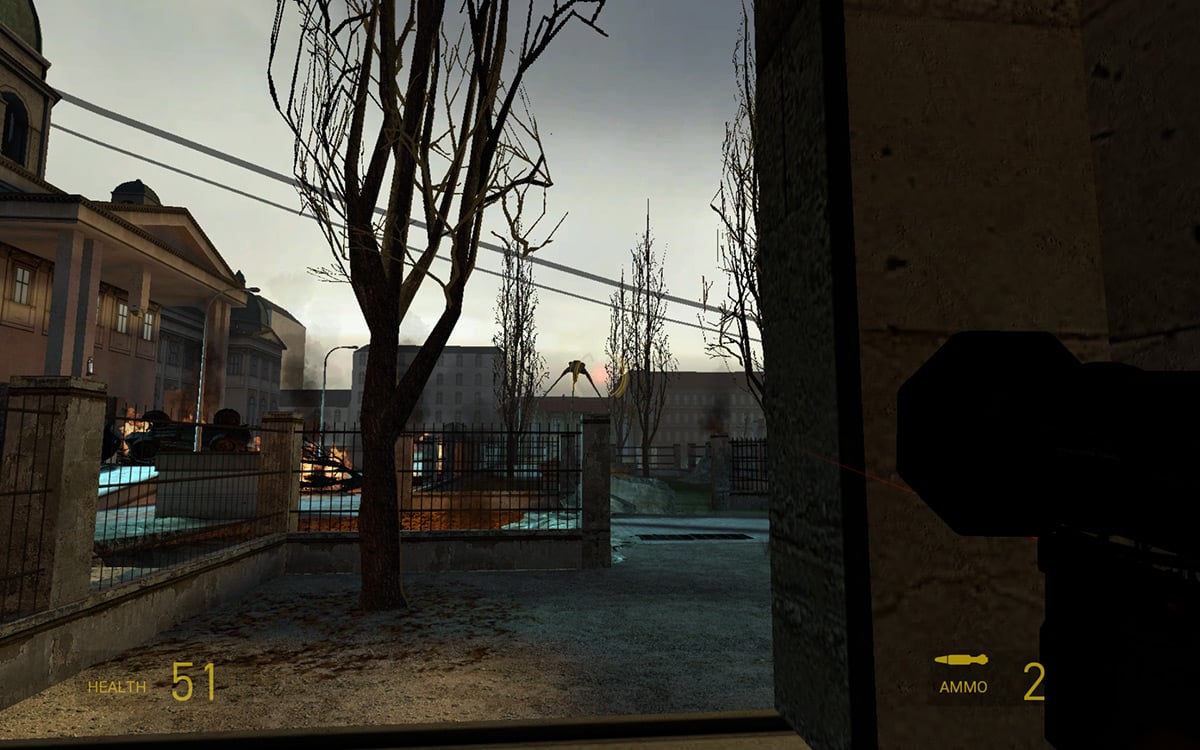 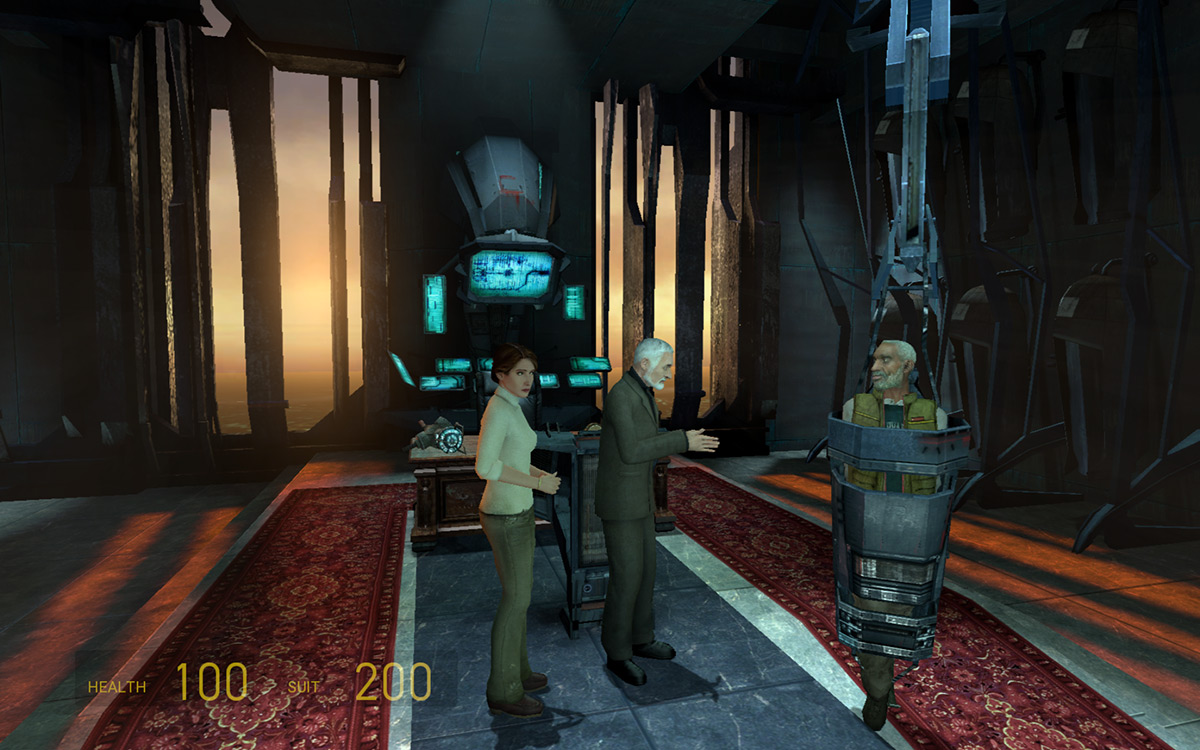 Half-Life 2 uses Google Play Games integration for things like achievements. This is all well and good (they even had a couple of amusing ones), but more than once I found that I wasn’t signed in, and missed out on some of the achievements. I simply had to hit a button on the gamepad to attempt the log in a second time, and this usually corrected it. But that it happened more than once causes me to feel compelled to warn prospective gamers of a possible problem, especially if their GPG level/experience is of any consequence to them. In the end, it requires minding in a way that it shouldn’t.

On the whole, this game is excellent. It’s not cheap, in that it costs a full ten spot, plus the requisite hardware. But this game is worth it. It’s a LONG game, probably the longest I’ve tackled on Android yet. My save file from the completed game was north of sixteen hours. Beyond that, the graphics are smooth and crisp, the sound track is catchy, and it’s Half Life. Even if you’re going to be a little lost with the story like I was, don’t let that stop you. The action is good, the handful of puzzles are clever, the sci-fi setting is cool, the characters seem convincing, it’s just all around a great, classic game that can be enjoyed again.