Nvidia’s Shield Android TV is now having Android 6.0 Marshmallow rolling out to it with new update

While owners of the original Shield tablet are waiting on their Marshmallow update to become available again after it was pulled because of a nasty Wi-Fi related bug, owners of Nvidia’s Shield Android TV units are now having their Marshmallow goodies rolling out to them in a new update starting today.

While the main meat of this update is the arrival of Android 6.0, there is also another addition coming with this update and that is the official support for Vulkan and fully comformant drivers. This just means that developers who are using the new Vulkan APIs that were released last week for game development on Android won’t have to worry about their games not being able to use Vulken on the Shield Android TV. 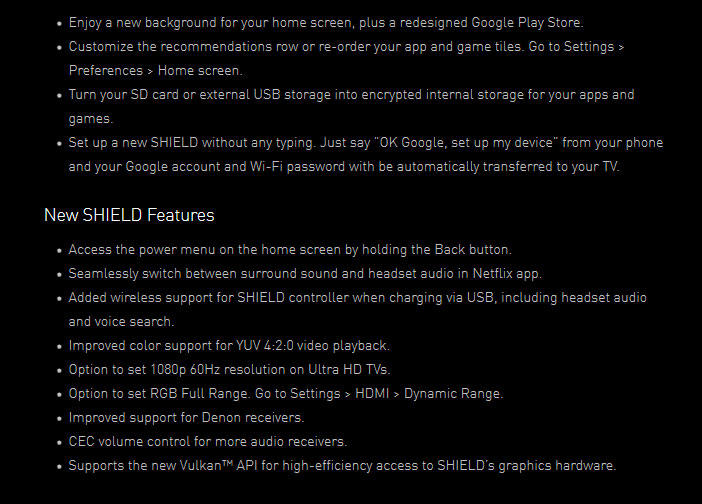 If you already have received Marshmallow on other Shield devices, than you probably already know what to expect. If you don’t own anything but a Shield Android TV, here is the official changelog for this update, although some of these changes are unique to the Shield Android TV due to the TV part of everything.

You can always manually check for this update if you don’t see the notification for it being available by heading over into your Settings, then About Device, and going into Check for Updates.