SMG Studio hailing from the darkest jungles of Sydney, Australia (This is how they describe their location.) has released an absolutely fantastic driving game. It can be tough as nails and rage-inducing, until you get used to the one-button controls though. However, once you do, Thumb Drift – Furious Racing is a treat to play and has plenty of visual splash.

If you have ever played any really good racing games that give you the opportunity to drift, you know how exciting it can be. It almost feels like you are losing control of your vehicle, as you narrowly careen around an object. SMG Studio, creators of previous games such as One More Line, One More Dash (This is a personal favorite of mine.) and OTTTD, have recently released Thumb Drift – Furious Racing for Android. The game looks great, plays great and is free-to-play. Before anyone gets up in arms, there is only one item to pay for, and that is to unlock the game to remove the ads. You can do that for around $2.00 and some change.

SMG Studio has created a game that is challenging and engaging to play, all with one-button controls. You touch the screen (With your thumb) to get your car to start drifting. You move your thumb left or right to choose the direction in which your car will drift. There aren’t any brakes and you don’t have to worry about acceleration either. This makes the game a bit more simple when you start to play. However, what you will find is that this game is anything but easy. It can be downright tough. Once you get the hang of it, it is very rewarding to pull off a long drift, through one of the four different environments. 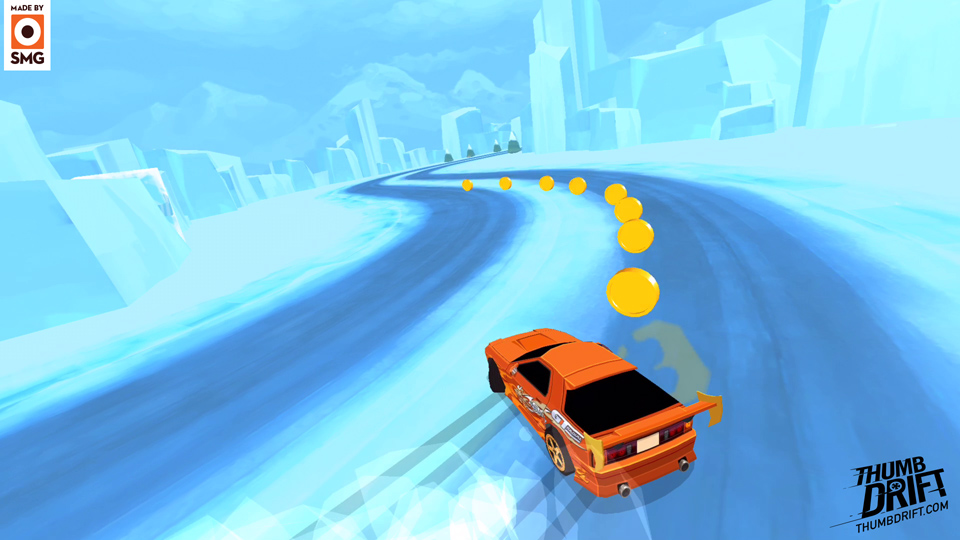 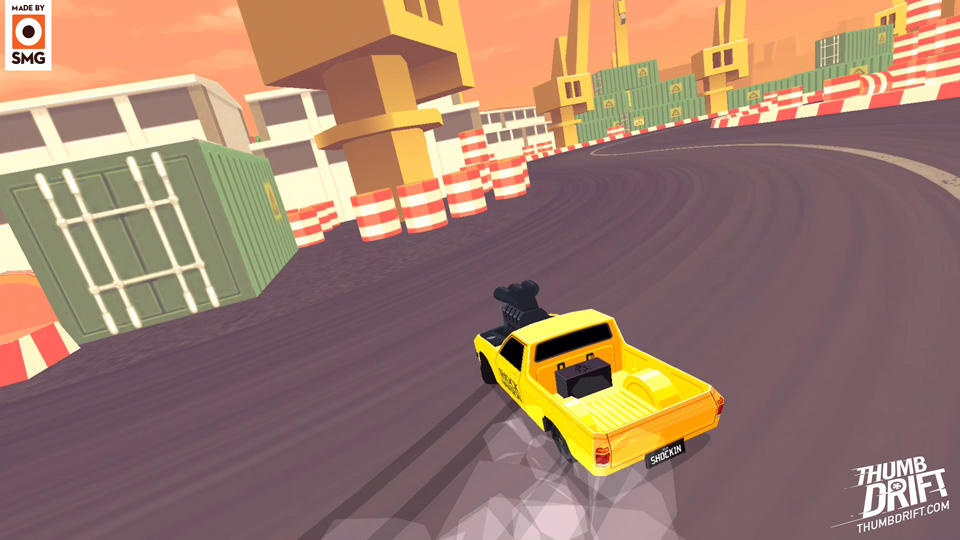 The four different levels in the game include: Gymkhana, Forest Road, Lumino City and Ice Road. It may seem like there isn’t enough to do with only four levels, but trust me, there is plenty to accomplish. Let me digress for a moment here and say it would be nice to have a free ride mode. Simply because the environments that SMG has created are pretty engaging, especially Lumino City. The only problem is that if you spend too much time looking at the background, you will run into a wall and see your car break into smithereens. Back to discussing the levels. SMG has made it relatively easy to unlock the levels. You primarily have to drive the required distances in the game to unlock them. You don’t have to worry about spending coins to do so. Just drive good sir or good lady! Drive and drift!

There are various goals that you have to complete. Once you have accomplished one, another pops up. As an example, a goal as simple as collecting 9 coins might sound easy, well… it isn’t if you don’t know how to pull off a good drift. Drifting is all about timing and finding the right line to start your drift. There are no aids to help you to pick your line either. This isn’t a bad thing at all. What it means is that you are going to have to practice and learn the craft of drifting.

In addition to the great drifting fun you will have, you will also be able to unlock additional cars. There are some really cool cars to drift around the corners in. Much like what made Crossy Road popular, you will use coins to unlock the additional cars, and ever so often, you get a free car. The free cars popped up pretty regularly, so I didn’t feel like I was coin hunting just to unlock cars. This allows you to focus on purely drifting through the different environments. 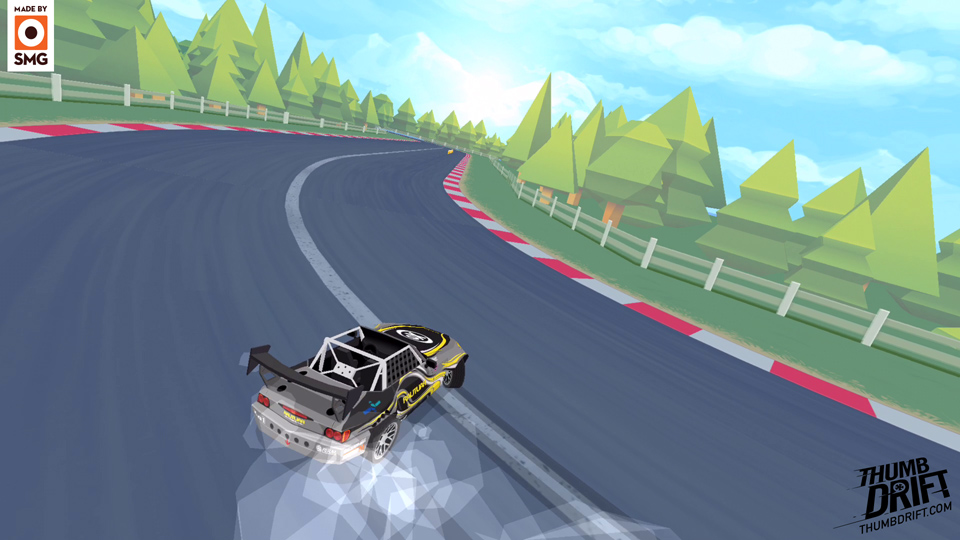 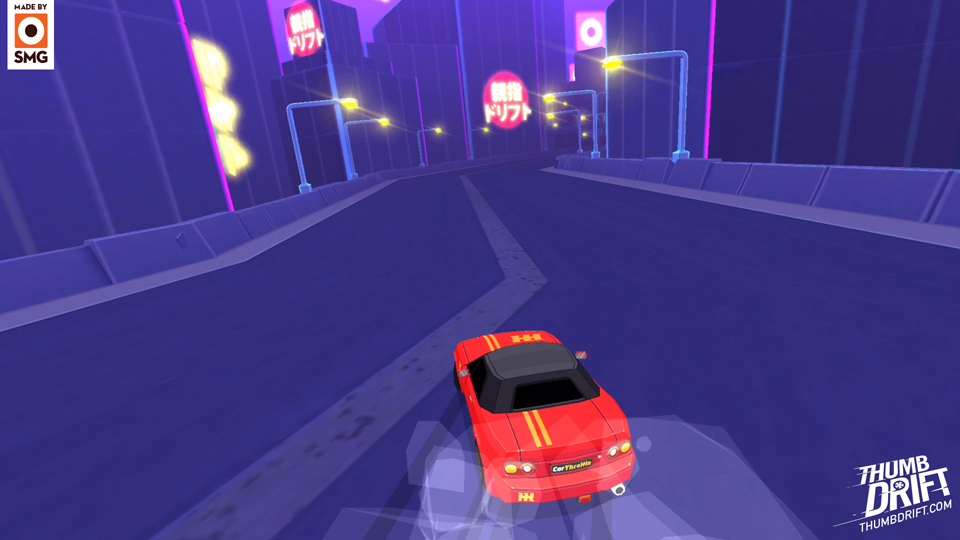 Though the game’s aesthetics have been simplified, they are still impressive. Just the right touches have been added to the low-poly graphics. As I have mentioned before, some games work really well in portrait mode and others don’t. Even though Thumb Drift is played in portrait mode it works well. The graphics and gameplay translate well from phone to tablet. The music is good too, which really amps you up while playing the game. The soundtracks are created by BATTERIE and can be found on SoundCloud if you are interested in checking the artist out.

Thumb Drift is integrated with Google Game Play Services with Leaderboards and 40 achievements to unlock. You can’t go wrong downloading this free-to-play game. You can get rid of the ads for a small price, there is plenty of gaming to take part in, and the game is a blast to play. Just keep in mind that the difficulty level is set a bit higher. Sure, it may take you a moment to get used to the controls and how quickly the game moves, but it is worth it. If you are feeling the need for speed, then look no further than Thumb Drift – Furious Racing. Who wouldn’t love a game that has quotes from Colin McRae, Smokey and the Bandit and Ricky Bobby of Talladega Nights.