Spry Fox has released some popular games for Android. I am sure you are familiar with the cute little bears that were the main focus of Alphabear and Triple Town. Spry Fox has even tackled strategy games with Steambirds, which is a classic and a favorite of mine. Their latest game takes those cute little bears from Alphabears, and throws them into an arena to take down tough enemies in Bushido Bear.

Bushido Bear is full of action, strategy, cute little bears and blades of steel. Yes, blades of steel. The object of Bushido Bear is to take down wave after wave of enemies. The enemies are wonderfully and imaginatively rendered, but don’t let that fool you, these enemies are tough. Fortunately for you, part of your gear involves being able to wield dual blades. Your bear is equipped with long swords in each hand. The enemies appear in various types and patterns, and thus ensues the challenge of fighting wave upon wave of mobile defenders. 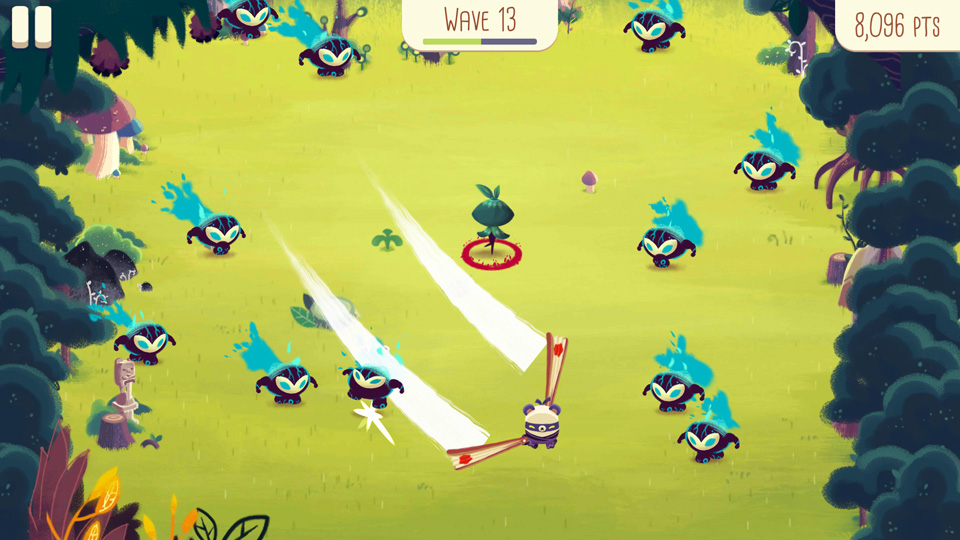 The game is instantly accessible with a short backstory told by an elder of the Forest Guard. You meet him and he explains how to fight the enemies. The game mechanic involves swiping, which is simple enough. You swipe to move your character and blades upon a path. The difficulty arises in the fact that your body cannot touch the enemies. If it does, it is game over. Only your blades of steel will rid you of the danger that is often swirling around you. You can also tap the screen to instantly move your bear to another area. Before each wave begins, there are circles indicating what pattern the enemies will be in when they show up. After that, you have to learn the characteristics of the different enemies, so you can develop your strategy for defeating them. Some enemies march slowly, while others rush across the screen with blades of their own, or shooting flame arrows at you and so on. The variety of enemies and their different characteristics make the game fun, and definitely tough in some areas. There are boss monsters too.

Currently there are three different environments you play in the game: Growlie Grove, Spooky Thicket, and Kraken’s Bog.  Crystal Cave is said to be coming soon. As mentioned previously, the game is set up for you to take on as many waves of enemies as possible. Interestingly enough, there is also a quest based system. There are three different quests that you are given daily. They may involve taking down a number of a particular type of enemy, obtaining a high bonus multiplier, making a donation to the shrine, or upgrading your equipment in the dojo. Once you fulfil the quest, you are given bonus items. Spooky Thicket isn’t opened until you have completed your first three quests, and then Kraken’s Bog after ten completed quests. This can be a little frustrating, as you have to wait until the new quests are offered, before you can access the two additional environments. There doesn’t appear to be any other way to unlock them sooner. 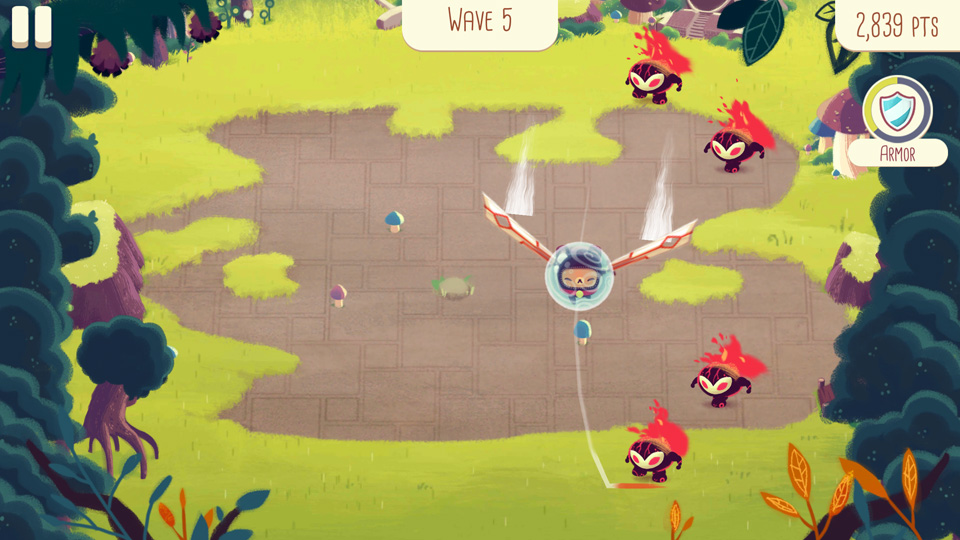 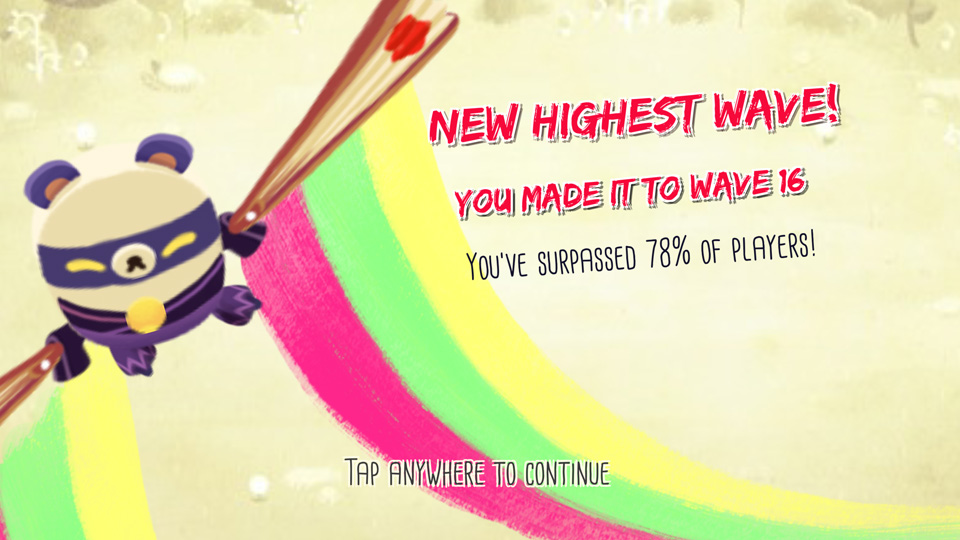 Bushido Bear is free to play, but you can remove the ads in the game for $4.99 There is an in-game store to upgrade your swords with sword size, attack speed, dash and a final attack. You use the in-game coins to upgrade these abilities.  The cost of the upgrades are well-balanced, and in no way does this seem to be a pay-to-play scheme. Spry Fox is using a system that rewards different types of gameplay. If you want to watch an ad to gain coins you can do so. Not only does watching an ad give you a few coins, it also provides you with a gift. The gift can be collecting a card for a different type of bear, or it could be a card that adds flourish to the trail of your sword when you attack, like a double rainbow, or fireworks trail.

There are nine different types of bears with different traits. You start off with Ninja Bear and pretty quickly gain access to Lone Cub. The bears are unlocked by collecting cards. Each bear has a set number of cards you need to collect before they are unlocked. As you get to the later bears, they take a lot of cards to unlock, but keep in mind, when you watch an ad or give an offering to the shrine (which is generally 100 coins), you are awarded different cards. Finishing quests also gives you access to different cards. This actually promotes more gameplay, and you don’t have to worry about spending one hundred dollars of your real cash to unlock the bears, and that is okay with me. I have really enjoyed playing the game with the two bears I have unlocked, and look forward to unlocking the others. If you die during the fight using one bear, you can avenge that bear by continuing game play with the other bears that you have unlocked. This is a nice way to keep the game fresh, and it keeps you playing if you run into one of enemies or get attacked and die sooner than you expected. 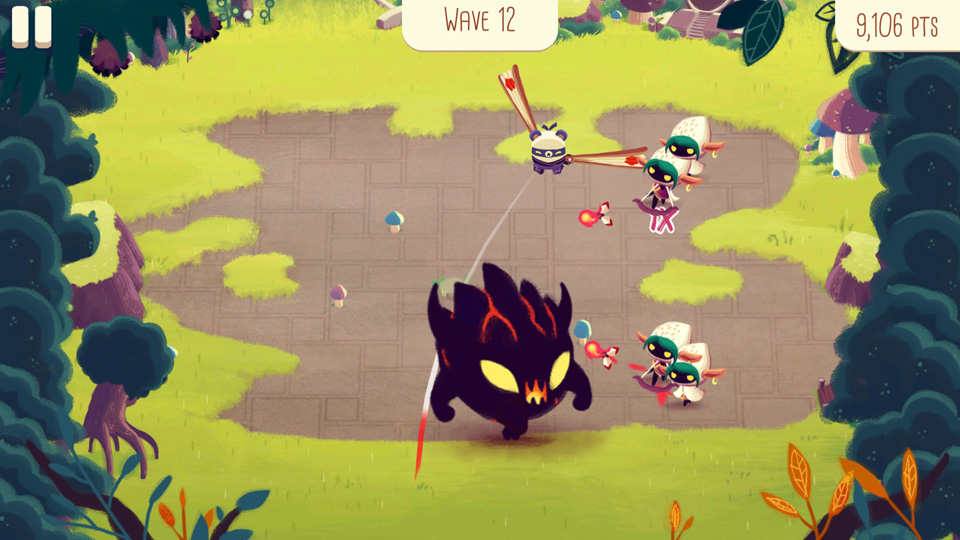 Bushido Bear is integrated with Google Game Play Services with 13 achievements to unlock and 3 different leaderboards, which basically is a leaderboard for each of the available environments to play in. Unfortunately, Google Cloud Saves do not seem to be currently enabled. I started playing the game on my phone, and switched over to my tablet to see how the experience might be better or different, and I had to start over. The achievements I completed were still there, but I had to start over at the beginning with unlocking bears. Hopefully this will be updated in the future. Bigger screens help with the game as the screen gets crowded pretty quickly, but you can enjoy playing this game on any sized device.

You can’t go wrong downloading Bushido Bear. It is a fun and challenging game. The controls are really good. Be aware that you may run into pulling down your notifications when you are rapidly swiping from the top down. Other than that, the game is really enjoyable to play. Spry Fox continues to make games that are easily accessible, with unique characters and environments. The free-to-play model is well structured, and if you don’t like that, you can always get rid of the ads for $4.99. Bushido Bear is a game that your whole family can enjoy, and a good addition to any library of arcade games, that you can pick up and play anytime.