HelloThereAB not too long ago released a really good martial arts game in Taekwondo Game. The game was polished, had great graphics and was generally quite fun to play. HelloThereAB  and At Night Game Studio have now made available, a mature +17 game entitled She Wants Me Dead. It is a platforming game that is brutally tough, has impressive graphics and a soundtrack that delivers, based on the title track being from music artist Cazzette. It is free to download and does include optional in-app purchases. Yes, you want to play this game now.

I am game for any type of platforming game and a couple of good ones have been released recently. We haven’t reported on Leap Day from Nitrome yet, but you should check that one out too. The difference between these two games is night and day… literally. She Wants Me Dead is a mature platforming game that has taken a visual approach akin to Limbo. Everything is painted in with a dark palette, with the few splashes of color that pop up on screen… primarily red. Yes, that is what you will be seeing when you are unsuccessful in the game. You will perish quite a bit. It is a mature +17 title for a reason, though it is not as graphic as many games you see on mobile or consoles, but it doesn’t hurt to have that warning label. 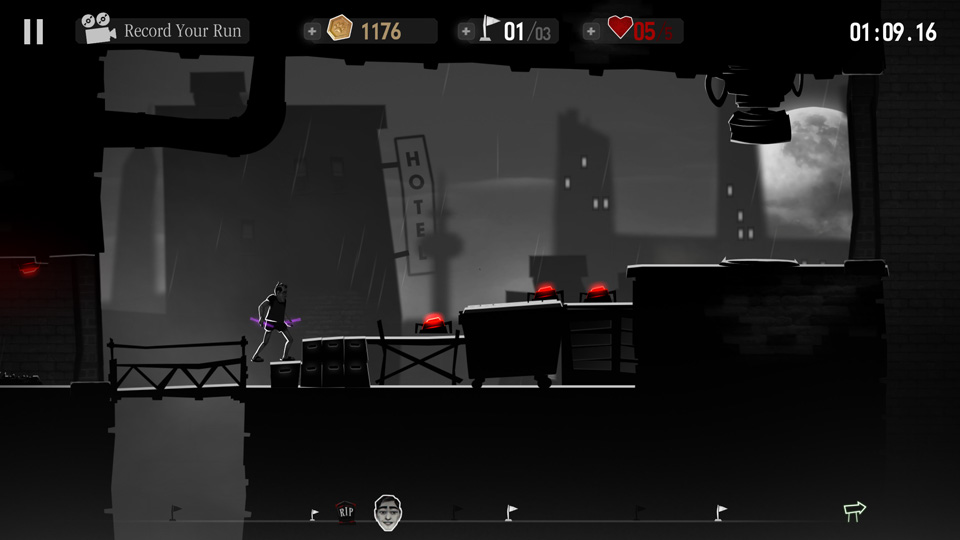 If you like cats, well, I am sure you haven’t met one quite like this before. Or, maybe you have. The story has two characters, Max and his cat Lula. Max has treated his cat poorly and Lula has had enough. She decides to take revenge on her owner and creates dastardly traps for him to run through. The intro movie is extremely well-produced. The game is considered a rhythm-platforming game. The title of the game is taken from CAZETTE’s latest song called She Wants Me Dead. It is an infectious groove that has funky beats, slick vocals and overall, is a good song to get you running. More than likely, it will become an earworm because you will hear it played over and over again in the game. This isn’t a bad thing though, because they mix up the song in multiple ways, so you don’t really tire of hearing it. 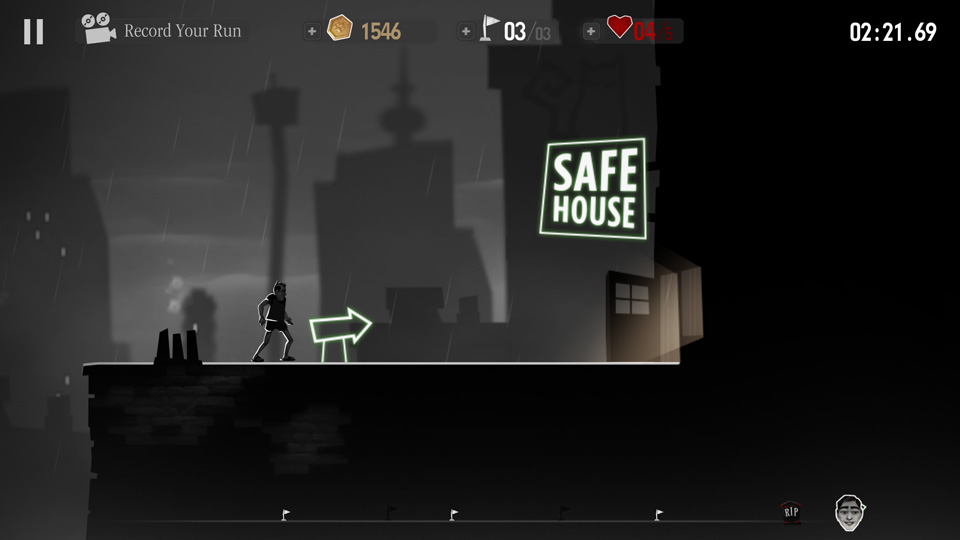 “We immediately decided to avoid the procedural feeling of endless runners and put a lot of work into thoughtful level design. This makes the game perfect for expert players looking for an amazing speed run challenge. Adding rhythm-synced graphics and level assets was also important to enhance the connection to the song.” – HelloThereAB

The controls are easy to learn, but since the game is brutally tough, you may think they don’t work all that well. Actually they work extremely well, once you get into the flow of the game. Max met an untimely end constantly, but it wasn’t because of poor controls. You press one button on the left side of the screen to move/run to the right. There is no backward motion. The other button on the right side of the screen is for jumping. If you hold the button for a few moments you ‘bounce,’ which allows you to jump successfully from one platform to another. It is critical that you learn how to do this, because timing is everything in this game. Though the spikes or rotating saw blades move to the beat, you will need to be in sync with the song and their movement. 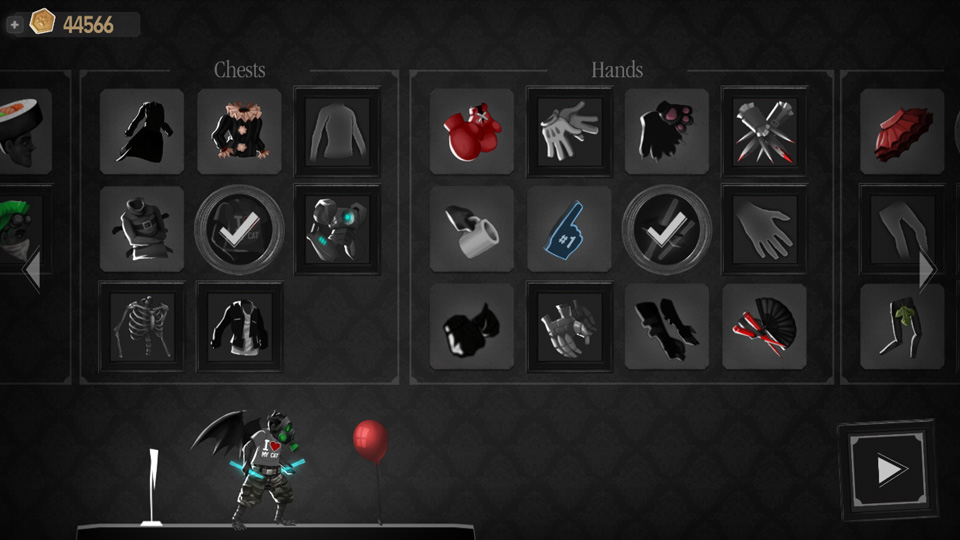 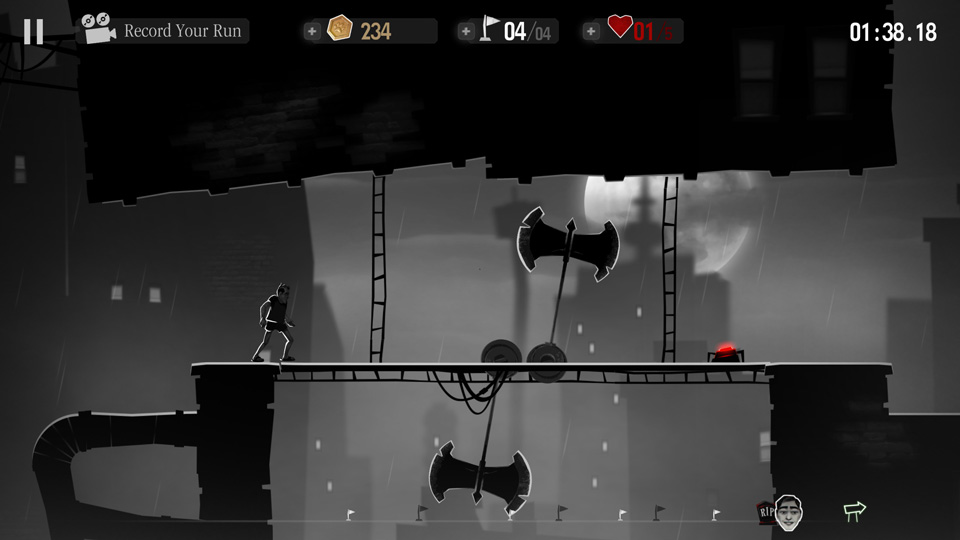 There is a bit of mystery and strategy when it comes to figuring out how to get past the horrific obstacles that Lula has set up for you. I don’t mind cats, but after playing this game, I will make sure that they are properly treated. Lula is a nightmare for Max. There are ten levels in the game, from what is shown on the menu. While this doesn’t seem like a lot, the levels are extremely well-designed. It will take you a while to get through some of the levels. You also have an opportunity to win a gold frame in each level, if you complete the levels without hitting an obstacle. Good luck with that! That is where the extended gameplay comes in. You will want to play this game over and over again until you get your run down perfectly. 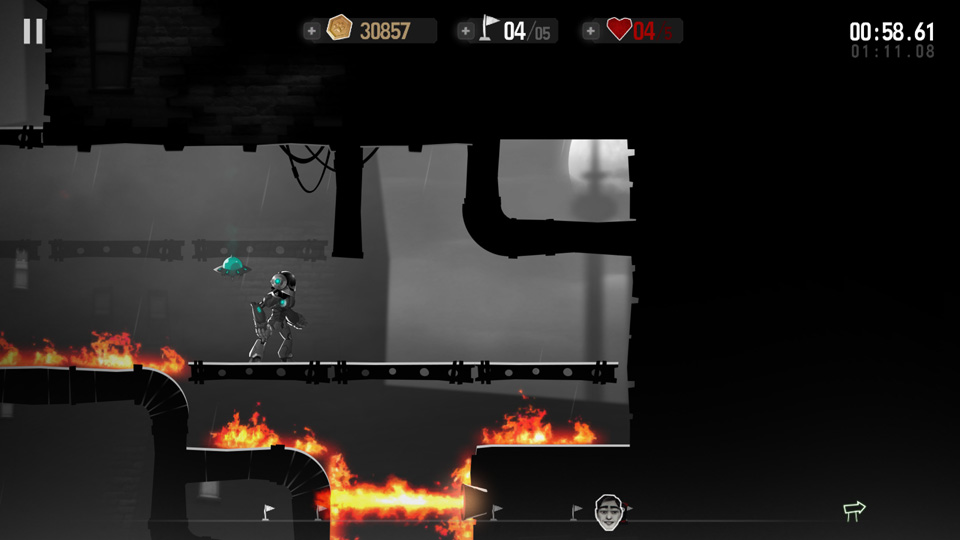 As I was playing I just let the timer run. Little RIP tombstones show up when you die. My screen became littered with them. It also tells you how many times it takes you to get through the level. You can also record your gameplay to show off to your friends.

She Wants Me Dead is free-to-play. You gain in-game coins for getting to different check points in the game. The coins are used for outfitting max. There are a considerable amount of different items you can customize Max with. It really helps the game shine artistically too. My favorite so far are short glowing, dual light sabers. Well they could just be running batons, but they look like light sabers to me. They change color as he is running. It is a simple but really nice effect. It shows the level of detail that the designers put into the game. You can also watch ads to help you gain more coins. In no way does this game feel like a pay-to-play scheme or a money grab. You can actually enjoy playing this game without fear of hitting a pay wall. Now, if you want that fancy skirt to outfit Max with, you are going to have pay for it, but it doesn’t affect your gameplay.

She Wants Me Dead is a fun, but tough platforming game. If you are a hardcore gamer, then you should give it a shot. If you are not, you may want to try it, just to check out a unique story, excellent art, controls and music. CAZETTE has a hit in this song, and now there is a great game to go along with it. Don’t miss out on She Wants Me Dead.