EA and Chillingo teamed up with ECC Games to produce One Tap Tennis. It is now available in the Google Play Store. I have played many tennis games available on mobile devices and consoles. I am a huge fan of tennis and play it whenever I have an opportunity. I was surprised and well pleased when I played One Tap Tennis. In short, it is one of the best one-touch tennis games you will ever play.

ECC Games is based in Warsaw, Poland. To their credit, they have created games such as Tower Dwellers, Roll in the Hole, Puzzle Craft and others. They are no strangers to the Play Store. Teaming up with EA/Chillingo has given them the opportunity to be published by one of the largest gaming companies in the industry. What is great about it for you and me is that ECC Games has produced an extremely fun and addictive game in One Tap Tennis.

Pixels still seem to be all the rage, as One Tap Tennis is full of pixelated imagery. It doesn’t hurt the visuals or the gameplay. Everything in this game is extremely polished from the in-game commentating, to the sounds of the racket hitting the tennis balls and the crowd showing their dismay when you don’t return a shot. It feels like you are at a tennis game and the matches feel quite competitive. That is part of what makes this game so fun to play. Matches only last a few moments, but there is a rush of excitement that occurs with each one. It was actually difficult to keep writing this review because I wanted to pick up my phone and get back to playing in my tournament. 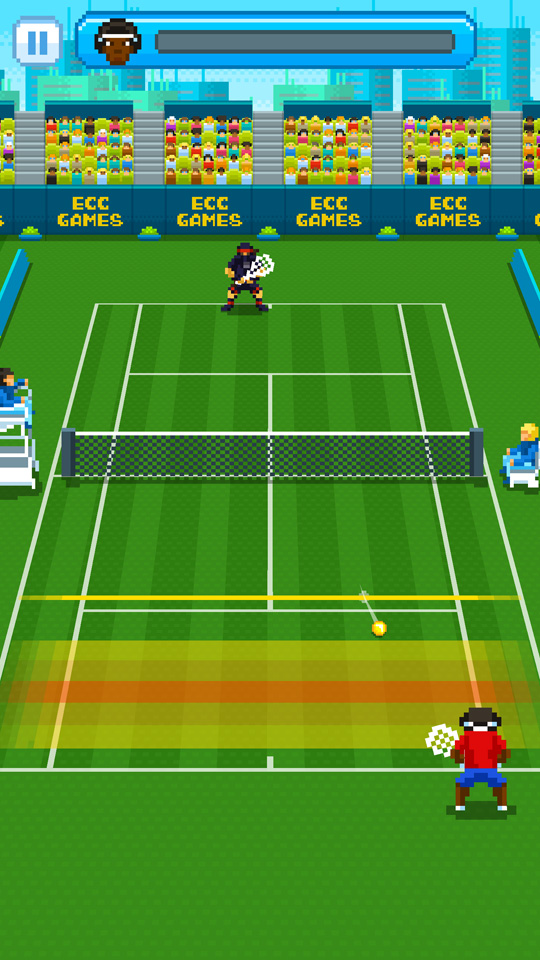 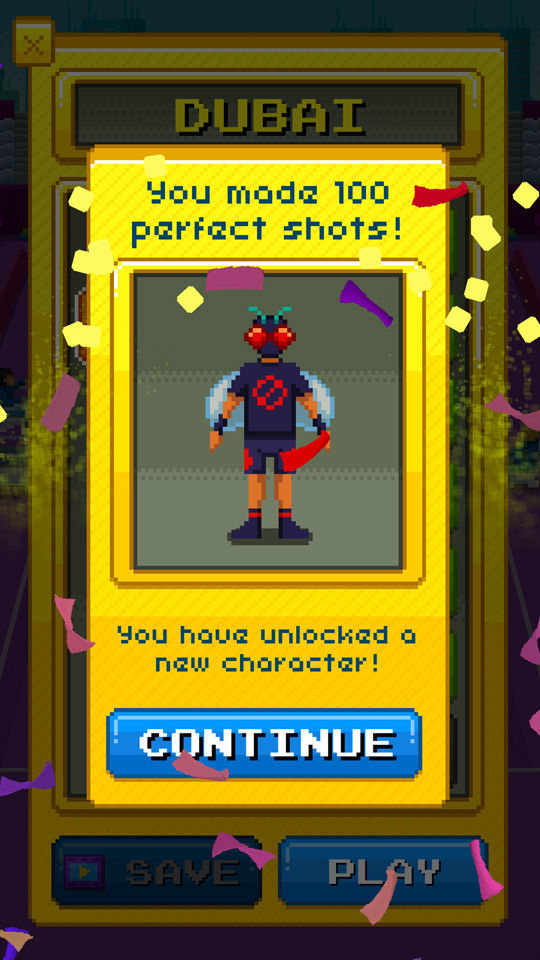 There is only one thing you have to do in One Tap Tennis and that is return the ball successfully. You don’t have to worry about serving, moving left or right, or aligning your passing shots. You just have to make sure you hit the ball. This is done by simply tapping your screen. Once the ball comes over the net, a horizontal yellow line appears that tracks the ball coming toward you. At the same time there is another band of horizontal bars that appear on your side of the court. There is one band that is darker than the others. If you tap the screen when the singular yellow band ball lands in any of the banded area on your side of the court, you return the ball. If you tap the screen while the yellow band is within the dark banded area, you will return the ball with a 2X power hit. It is easier said than done, which brings up the complexity in playing the game. Since the game is played in portrait mode, you spend most of your time watching the lower half of your screen, so you can time your shot. At the upper part of the screen is a gauge meter that fills up each time you return the ball. If you continue to hit the ball with 2X power, the gauge will fill up faster. If not, it will take a few swings to fill the whole bar. Once the bar is full it is game over, you have won the match.

The meat of the game comes in with the multiple matches, seasons, tours and of course different characters you can play. Characters will be unlocked as you progress in the tournaments and when you have completed certain achievements, like returning 100 balls. There are 30 different players that can be unlocked. You can also choose to pay real money to unlock a character sooner. Once you unlock a character, you can take them into your tournament. The characters are extremely creative such as: Brave Arrow, Pumpkin Hollow, Joe Tacco, Terry McFly, Ninja Shadow, Red Nose and so on. Even though they are loosely rendered, the changes in costumes and characters, make a nice addition to the gameplay. Can you imagine playing tennis against someone wearing a ninja suit and sword? 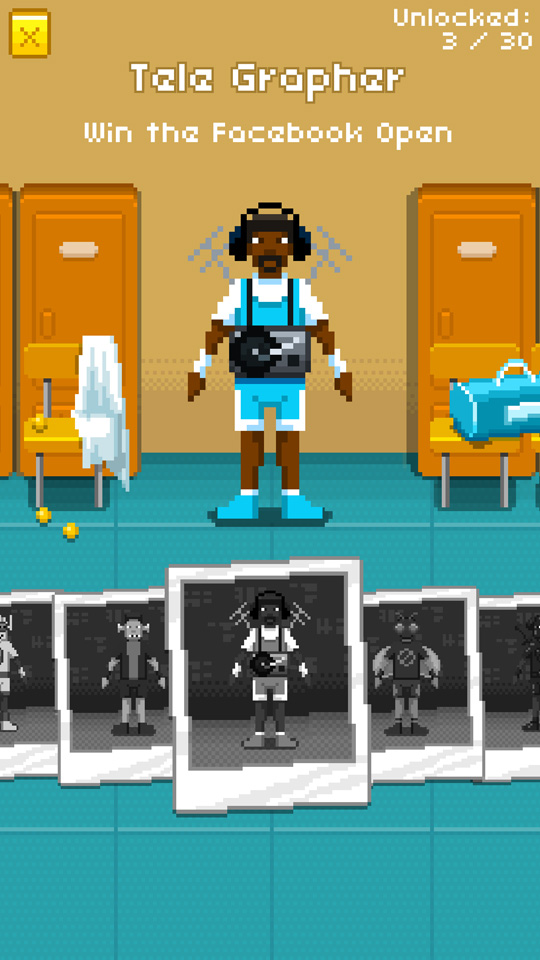 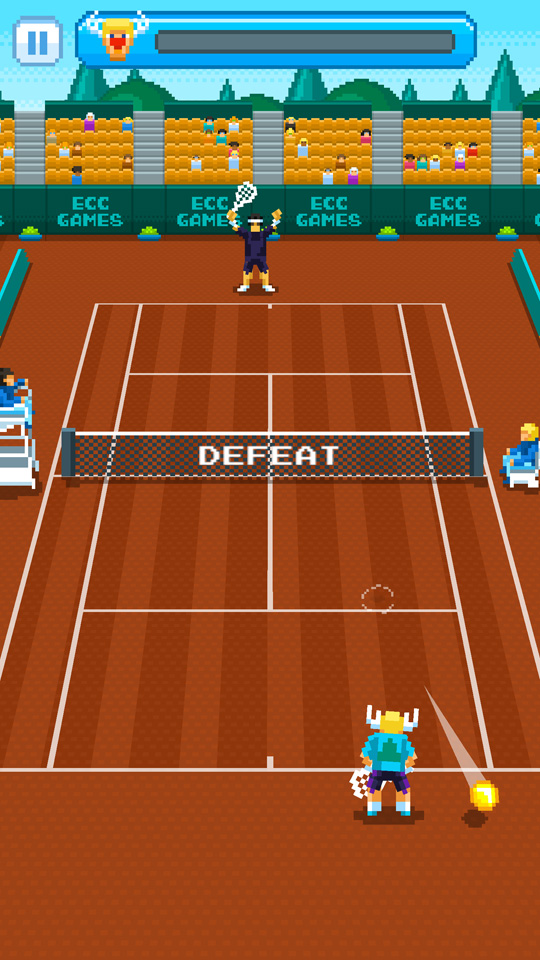 There are multiple places you can play in the game such as: Warsaw, Tokyo, Berlin, Dubai, New York, Sydney and many more. The court and colors are what primarily change when you switch venues. Again, there isn’t a lot of variety in details, but it helps to switch things up a bit. You feel like you are going from a hard court to a clay court with some of the colors chosen for the courts. You can play in a tour that has venues in the different places that I mentioned. Once you are done with the season, you move on to the next one. Each venue has a set of challengers. There are five challengers in each venue. Let me tell you, the difficulty does ramp up in this game, and it is most certainly welcome. You would think with a simple tapping game that the game may not be that tough, but it can be. It is a good thing you don’t have to worry about anything other than tapping your screen..

During gameplay you will be on the receiving end of passing shots, lobs, overhead smashes, drop shots and heavy baseliners. The different shots are mixed up extremely well and that is also part of what makes this game excellent. It actually feels like you are playing a match. The players animations are fluid and for pixels, as realistic as could be made available.  The lob shots and the high-kicking topspin shots can be brutally tough to return. As a matter of fact, I thought I would never make it out of my tournament in Syndey. The players were really good. Again, it is hard to believe that the gameplay can be so enjoyable from a simple one-button game.

One Tap Tennis is free-to-play. You can unlock the ads and get a unique character for $2.99 If you don’t want to spend any money on the game, be prepared to watch ads. In each tournament as you progress up the ladder to the final round, you will more than likely want to save your progress. To save your progress you have to watch an ad. The ads range from 12 seconds in length to the typical 25 second ad. I have been burnt quite a few times by thinking I am going to move up the ladder with ease. I got to the third or fourth competitor and then lost. You have to start at the beginning of the tournament when you lose, if you haven’t saved the last game you won.This is not necessarily problematic, but it means you will be watching quite a few ads. 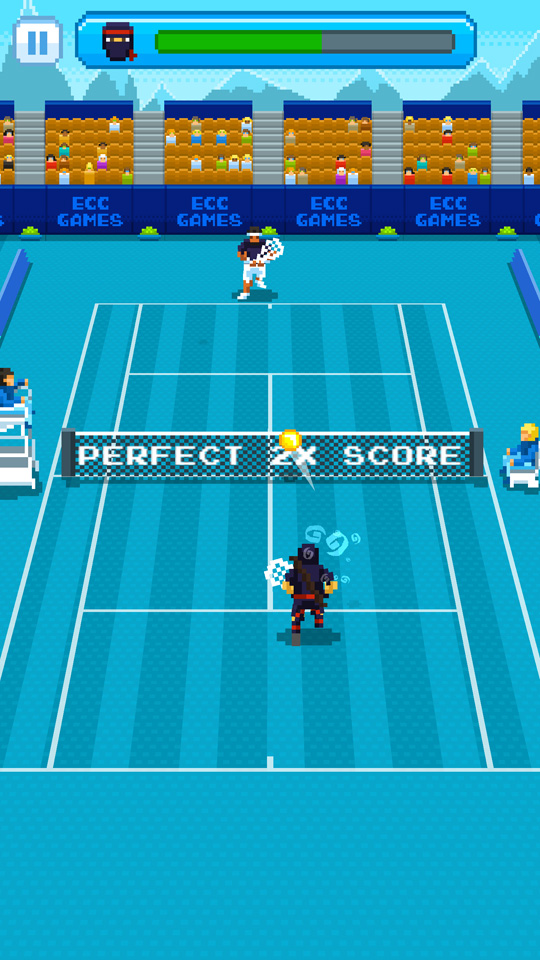 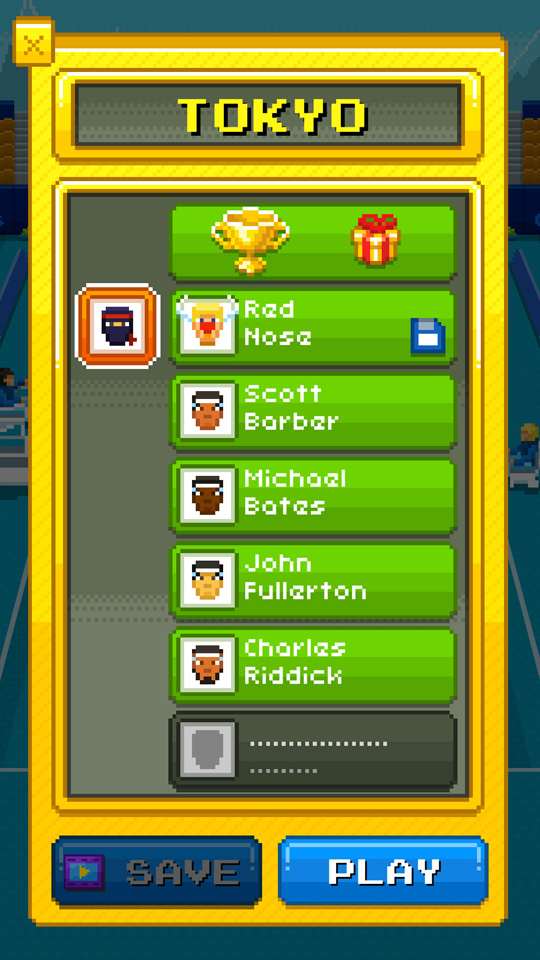 In the settings for the game you can turn the commentator on/off, as well as the music, and sound effects. You can also switch the language of the commentator. There are currently 12 different languages available which is also greatly appreciated.

One Tap Tennis is integrated with Google Gameplay Services with 31 achievements to unlock. You can also connect your Facebook account and compete against friends on a leaderboard. The game also offers daily challenges that yield different rewards. In the daily challenge it is you against a tennis ball machine. The machine is firing balls at you at different paces in succession. It is quite tough, but ads a bit of variety to the game. If you enjoy tennis and or mobile tennis games, you should really give One Tap Tennis a try. You will be amazed at how it plays out like a real tennis match, even though the only thing you are doing is simply tapping the screen. ECC Games has created a winner with this game, and good tennis video games are really hard to come by. Well done ECC Games! You have delivered an ace into the mobile gaming courts.