Nvidia, makers of a plethora of PC and Android hardware, and have released an update to their tablets. Specifically, this update will (finally) bring 6.0.1 Marshmallow to those of us with their LTE variants that have been waiting too long, to be frank. Some of what’s included in this update are things like support for the Vulkan API, re-positioned Navigation buttons when the tablet is in landscape mode, enhanced memory compression, and fixing a bug related to WiFi connectivity when the tablet is waking up from sleep.

Some of the fixes address issues with the device’s compass, issues with mapping the gamepad, moving apps to the SD card, and an HDMI output issue that was specific to Doom 3. And with this update being based on Android M, all of the OS upgrades inherent to that are also in the update, such as Doze Mode.

Here’s a look a the full changelog, for those scoring at home: 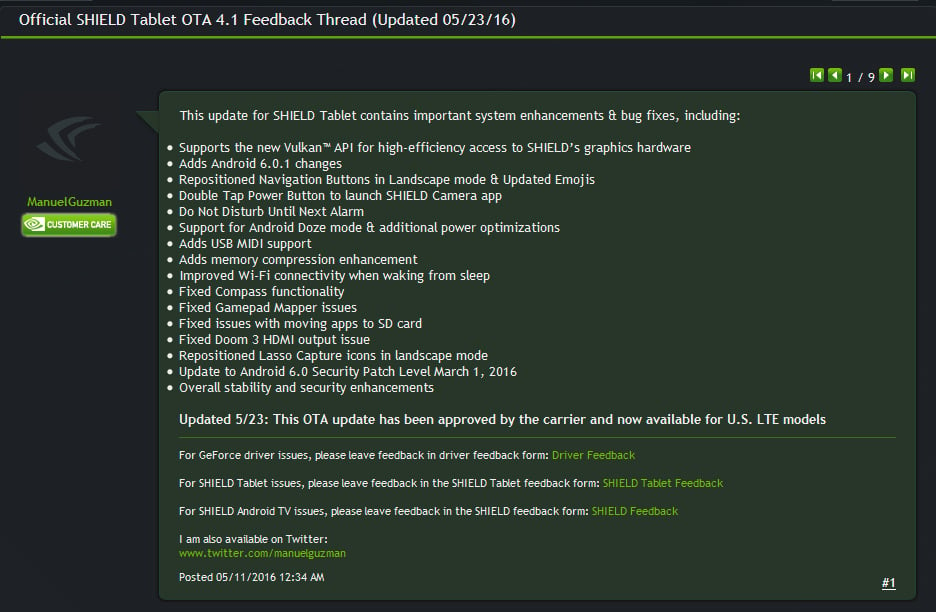 Again, this update is catching their LTE line of tablets up with their other WiFi-centric models that already have it, such as their recently released K1. And speaking for myself, I’m disappointed at how long this took. Nvidia makes a point on their blog of pointing out that this update for the LTE variants has been approved by the carriers even listing it in a boldface type.

I didn’t purchase mine through a carrier, and was hoping to sidestep this issue. Given that the carriers have held up an otherwise ready update from hitting my tablet is disappointing for sure, and will definitely cause me to avoid this model in the future. What’s most frustrating about this though, is that my buying decision won’t even impact that carriers, but will hit Nvidia instead. I didn’t buy it from the carriers to begin with, and it’s not their loss for me to go WiFi only, whenever I get around to an upgrade.