Sleepyhead Studios founded their studio in March of last year. One of their first games is Barking Irons. Another title could be how the west was won. Barking Irons is a fun and fast arcade shooter with excellent controls. It is you against a host of enemies in this game full of wonderful pixels. If you haven’t played it already, you should give it a shot.

You will find Sleepyhead Studios in Sydney, New South Wales. They are an independent game studio that knows how to make a fun game. If you are an old school gamer and remember arcade machines at the skating rink  or bowling alley, you may find a bit of nostalgia with this one. Remember those machines that had the toy guns that you fired at the screen? Barking Irons reminds me of those in some ways. The gameplay is incredibly simple, but challenging at the same time. It is you against a very diverse group of characters that are determined to take you down. You have a revolver, some bullets and cover that you will use against people throwing bombs at you, shooting at you and a few crazies that rush you with a hatchet. Simple gameplay turns strategic when you try to figure out how to stay alive as long as you can. Yes, like classic arcade games, this game is all about the high score. 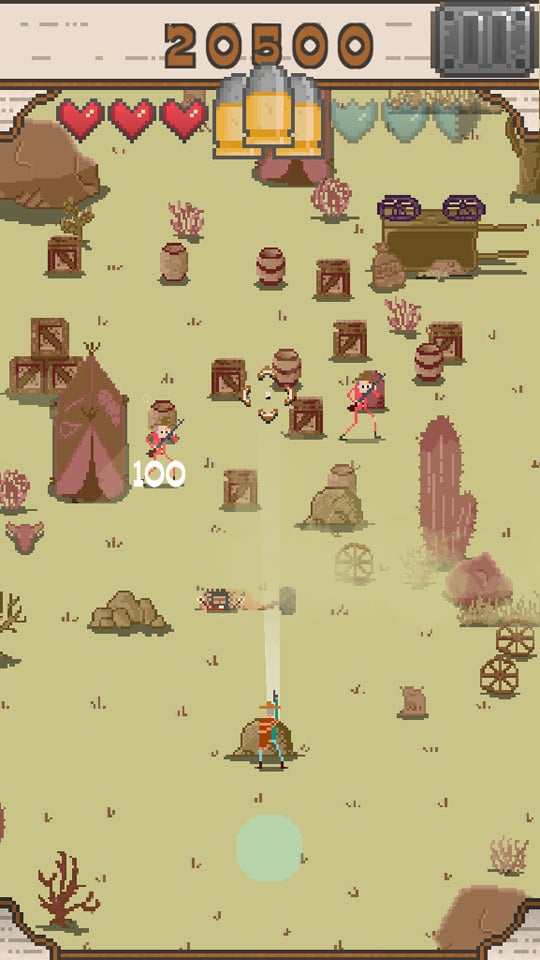 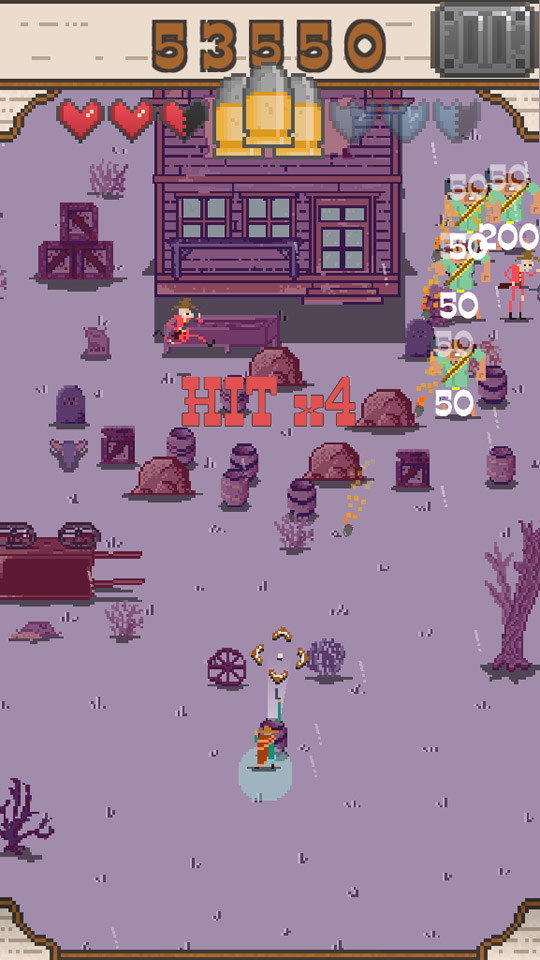 “Bullets, bombs and bad breath. A gang of fearsome outlaws has descended upon the county of Barking Irons. With six-shooter in hand, a thirst for justice and a faltering sense of self-preservation; Wes the local lawman charges into battle.” – Sleepyhead Studios

Aside from the fantastic pixels that create an impressive setting for the game, Sleepyhead Studios has chosen to use a gaming mechanic that works flawlessly for combating your enemies. With a single finger you touch and drag, to control where you will fire your weapon. There is a reticle at the end of a leader that shows you where Wes will fire his weapon. If you don’t fire your weapon, Wes stays hidden behind a small rock outcropping or barrel. The cover provides him minimal safety that lasts as long as the three shields shown at the top of your screen. There are also three hearts at the top of the screen too, that will dwindle to nothing if you keep getting hit.

Currently there aren’t any power-ups in the game, nor are there different weapons you can use. It is your trusty six-shooter that will get you through the battle. Sleepyhead Studios has been responding to comments gamers have made about wanting a little more variety in the game, so we can expect, based on their responses, that they will be adding content to the game.

The game is broken up into levels. Once you defeat all of the enemies on one board, you move to the next. The boards change color each time you progress, as does the environment. This is important because it changes up the gameplay and your strategy. The enemies are constantly running about the board and changing position. They use cover as well, and will dart in and out, so you won’t always have a direct shot.  With at least five to six enemies on the board, things get dicey pretty quickly. You have to aim perfectly and make sure your shots count, as it takes multiple hits to take out your enemies. There are some foes that rush toward you and it is tough to defeat them, while others are raining down bullets in your direction. Keep in mind, you can’t move left or right, so it is all about timing your shots. If you are lucky, you can take out the bullets of your enemies and get a hit on them at the same time, or hit multiple characters with one shot, to gain a combo in your score.

Barking Irons is the perfect arcade game. It is quick, fun and challenging. The game is a premium title that will only cost you $.99 with no in-app purchases. You really can’t beat that these days. Again I must repeat, currently there aren’t any power-ups or switching of weapons right now, but hopefully that is coming soon. The music and sound effects in the game really make you feel like you are taking part in a western. From start to finish this game is a good package.

The game is integrated with Google Gameplay Services with ten achievements to unlock and global leaderboards to compete on. I don’t think you can go wrong with playing this game. If you enjoy games with a wild west setting, pixels and creative characters, you should look into Barking Irons. For those precious few moments of gaming that I have, Barking Irons fits the bill. Sleepyhead Studios has hit the bullseye on this one.