The Foursaken Media game development team consists of four brothers, the Jacksons. Tom, Jamie, Miles and Connor Jackson handle everything from game concept, to programming, design, music and marketing. They have a sleek studio in downtown Raleigh where all of the magic takes place. Their latest offering to mobile gamers, War Tortoise, continues the battle themes found in Heroes and Castles and Block Fortress Wars. Outside of having one of the most creative names for a game I have heard in quite some time, the game is more than we could imagine. It stars a main protagonist (a mouse) that is sitting atop a mechanical beast, a tortoise. This is just the launching pad for all of the action that will take place. 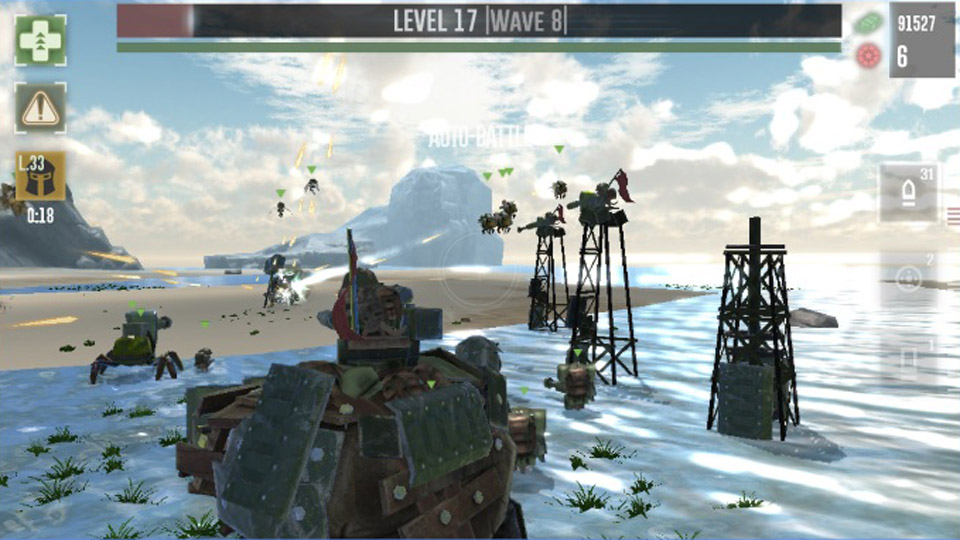 “Take control of the mighty War Tortoise, a heavy tank armed to the teeth with powerful weapons and automated turrets! Equip weapons. recruit units, build defenses, collect resources, and ultimately defend against a huge onslaught of enemy forces. Combining idle gaming, tower defense, and a shooter. War Tortoise is a unique mix of gaming that anyone can enjoy!” – Foursaken Media

Wild frogs, Rat gunners, Rhinoceros Beetles, Bomber Beetles, Fireflies, Skinks and a host of other different creatures will aim to destroy you, as you lead an army of your own to victory. War Tortoise takes battle to a completely different level, based on the unusual theme alone. If you have played Heroes and Castles, you will definitely enjoy War Tortoise, as it is a fine mixture of multiple genres in gaming including resource management, RPG elements, tower defense and shooting. 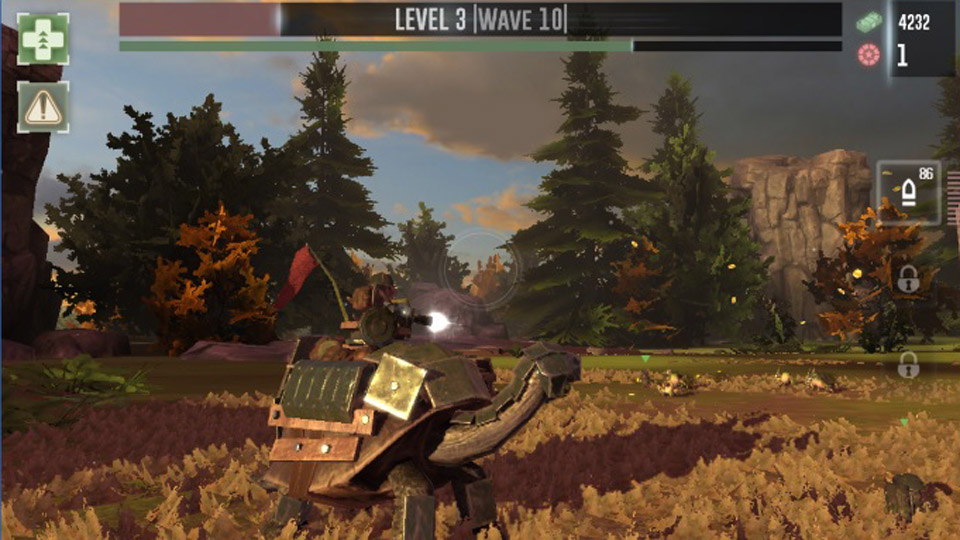 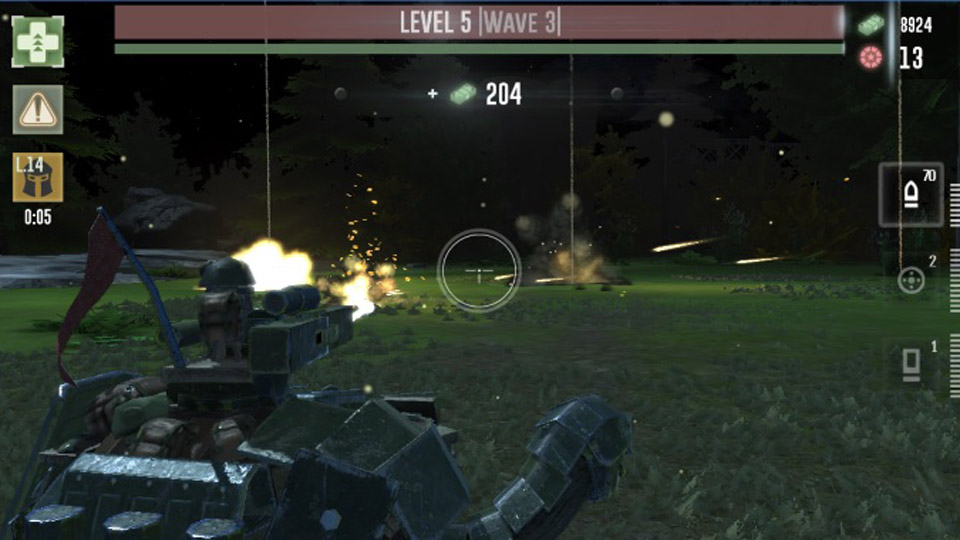 The game is viewed from an over the shoulder perspective. The graphics are well-produced, and the best way to describe the shooting in the game is extremely satisfying. If you were playing this on one of the latest consoles, I would imagine having jarring feedback from shooting the weapons atop your war tortoise/tank.  The ability to upgrade your tank and your guns is a game in itself.

There is no way you are going to win the battle alone, so to aid you, there are recruits that you can bring into battle. They smartly attack the closest enemies. If they are defeated by your enemy they will respawn over time. You can also summon a war hero who rapidly lays waste to the enemies with swift and deadly blows. Your heroes also has  special abilities that you can activate, which sends them into a pretty neat animation, where they move rapidly to take out some of the frogs, skinks and other creatures on the battlefield.

As with the Heroes and Castles games, War Tortoise has incredible depth. You can spend a lot of your time figuring out different strategies and planning how you will upgrade your weapons, or fine-tuning which allies you will take into battle with you. One other component of games that Foursaken Media makes, has to do with the level of complexity. They are not afraid to stray away from making a challenging game. Wave after wave of enemies will be coming at you. After ten waves, you ascend to the next level. While you are in the heat of battle, you will also need to make sure you click on the items that are dropped in the fields, which helps fund your war machine. The primary control you have in the game, is aiming at the enemy and switching out your weapons. Beyond that, it is setting up your towers for defense and managing your recruits.

War Tortoise is a free-to-play game. You can choose to spend money on perks which, add a huge boost to your defenses, or you can spend money on upgrading your equipment and heroes.  Unlike some other games, you collect resources rapidly in this game. There is also an auto play feature that basically allows the game to simulate your battle while you are away. Thus, you can collect resources even while you aren’t actually playing the game. The monetization structure seems quite balanced. You also have the option of removing ads in the game. There are multiple tiers of payment from which you can choose, starting at $1.99 and going up to $19.99. The different tiers grant you different quantities of perks. The perks can be used for upgrades, or for allowing you to immediately hop back into the action after you have been defeated. This is helpful because you may not want to start a particular level over, after you have hit the eighth or ninth wave, and are just about to level up. 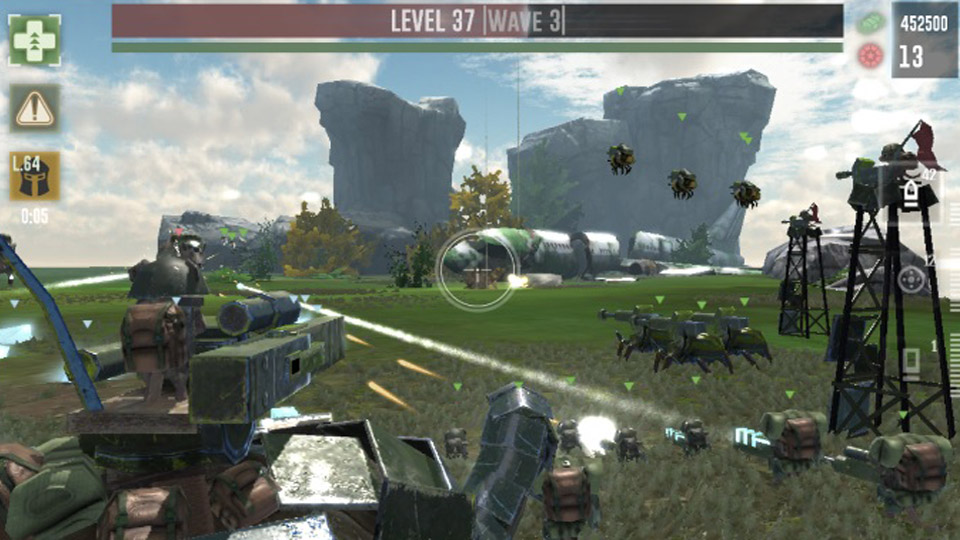 War Tortoise is integrated with Google Game Play Services, but there don’t seem to be any achievements at this time. There is an endless leaderboard for you to compete on. Also, I couldn’t find an option to restore purchases. It may be there, but I couldn’t locate it. I paid to have ads turned off while playing on my tablet, but when I went to play the game on my phone, it started off with an ad. This may be something Foursaken Media still has to work out. When the game was released yesterday, there was a problem with devices running Android 6.0. The game was crashing on startup. It is rare that you read comments, where reviewers go ahead and give a developer five stars, because they trust that the game will be fixed, and appreciate the developers body of work. Foursaken Media posted in the comments of the Play Store, and said they hoped to have a fix the same day. Late yesterday evening, the game had been fixed. Once again, top-notch customer service, from a top-tier developer.

War Tortoise is a game that is enjoyable, has unique content and depth. You can play this game for quite a while. There are layers and layers to this game. The game was released on iOS not too long ago, and many reviewers and gamers have had great things to say. Don’t hesitate in downloading War Tortoise. It is one of the most well-produced games out there, that just happens to be free to play. Don’t let this being free-to-play, keep you from trying out this game. War Tortoise is well-worth your time. Now… Foursaken Media, can we get All is Lost too?