Frima Studios is based in Canada. They have released a few titles for Android and iOS. A few weeks ago, they released Splash Pop. It is a fun puzzle game with a nice dose of strategy thrown in. If you enjoy puzzle games that get your fingers tapping, then Splash Pop will be right up your alley. It is available to download in the Google Play Store now.

It is always pleasant when you come across a game that is much more than you expected. Splash Pop on the surface looks like it could be a random tapping game. I was surprised that after the first few levels, many different game mechanics were introduced to make the game even more fun and challenging. The goal in the game is to squash as many of the ‘lushies’ as possible for their juice. You are doing all of this to satisfy the Juice King of course. An assortment of many adorable and colorful little lushies pop up out of holes on the board. The lushies will attempt to make it from one hole to the other. If any escape, it affects your three star rating. The lushies come up out of the hole as if you had kicked an ant hill. They are everywhere. Fortunately for you, you have nimble fingers and other abilities on your side, that help you in your quest to defeat the mob of slushies. 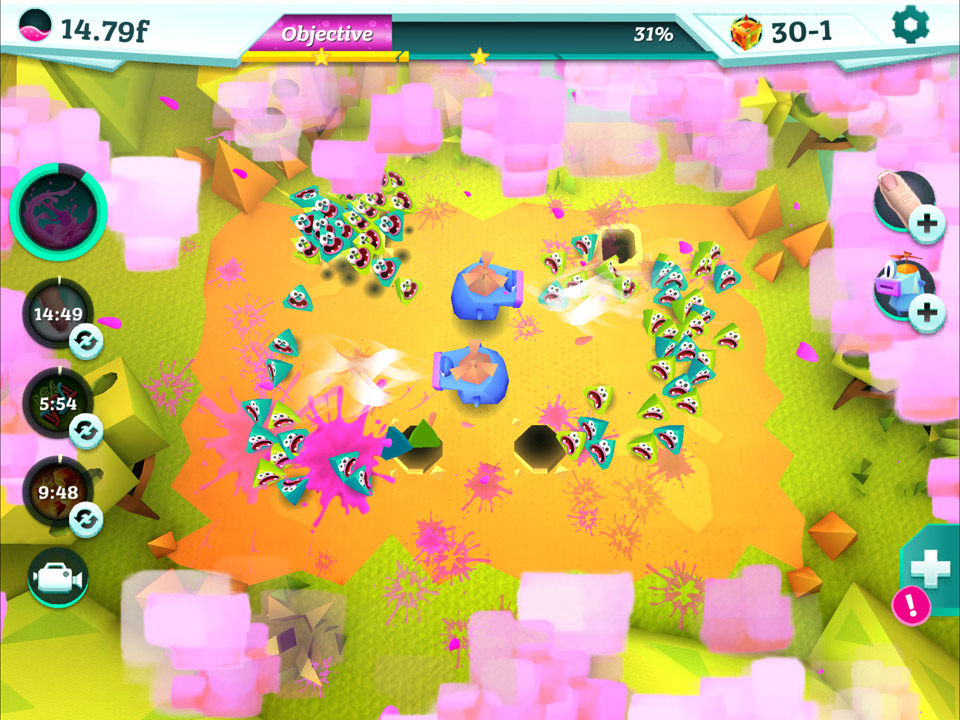 “Funny and absurd, Splash Pop takes you to a quirky galaxy where you and your finger are in charge of splashing and juicing as many cute and innocent creatures as you can. Aided by strange monsters, squish, scorch, slice, dice, nuke, splash and pop the living juice out of them all in order to satisfy the unquenchable thirst of the Juice King!” – Frima Studios Inc.

What I have enjoyed about Splash Pop thus far is the variety in the gameplay. Initially I expected to just be tapping on the screen. With the aide of other characters, you have to plan how to get all of those lushies popped. In the early stages you are given help with a character that basically has a fan attached to the end of his nose. You decide which direction to point the character so that the fan can blow the lushies in a certain direction. Based on the movement of the lushies this could change. One level has one fan and then a few levels up you are given an additional fan. It becomes challenging because of the rate at which the lushies appear. Yes, while frantically popping them, you also have to adjust the direction of the fan, if it is not working in the way that you should. This adds an enjoyable level of complexity to the game, but it still makes the game fun and more engaging. 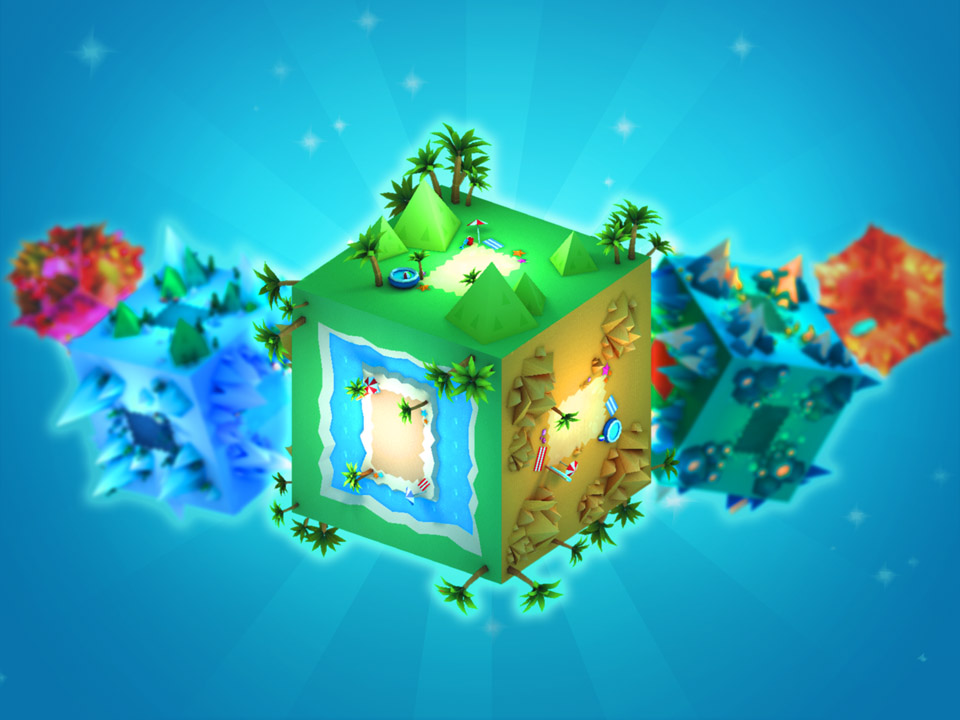 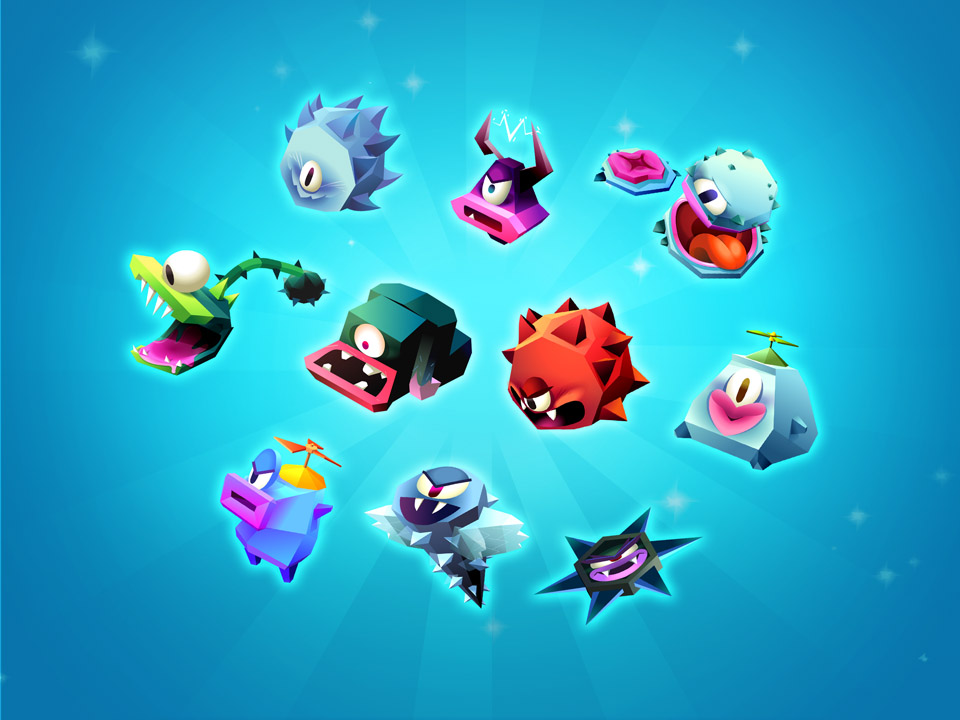 There are also boss monsters that you will have to face at the end of each set of levels. While I am at it, I can’t forget to mention how much I enjoy the brief animation that takes you down to the board level of the game. You start off from a world perspective. In this case it is a square. The square shows the world or the playing boards and then it rotates and zooms into the board that you will be playing on. While it is simple in its execution, it works really well and it makes me wish I had the ability to rotate the world myself and zoom in on the detail of the art. It is quite fascinating and well-produced. Frima Studios has done a good job of adding splashes of detail exactly where they are needed. 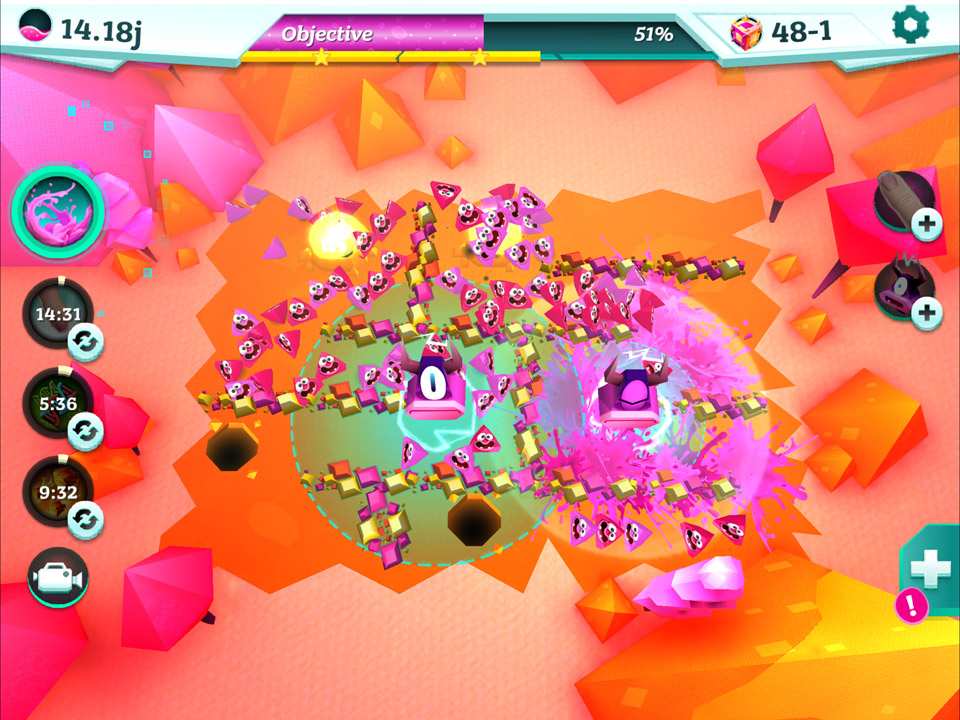 You also have the ability to basically level up your finger, for lack of a better description. As you squeeze the juice out of the characters, the juice is saved in a counter to the left side of the screen. As you collect more juice, you can basically upgrade the power of your ‘squish’ as well as your friends that come along and help you in the battle. This again, adds more depth to the game, which will allow you to develop your strategy even more through the gargantuan amount of puzzles in the game.

Splash Pop is free to play and does include optional in-app purchases. If you like you can turn of the ads that pop up in between the levels of gameplay. The game is also integrated with Google Game Play Services with 5 achievements to unlock and 5 leaderboards to compete on.

I have been pleasantly surprised and pleased with Splash Pop so far. The game is colorful, fun and challenging. The other thing I like about the game is that it has an easy learning curve. If you are looking for a game that the whole family can play and enjoy, look no further than Splash Pop. It is a wonderful entry into the arcade/puzzle genre.