Today Plarium announced a partnership with Skydance Media for the rights to develop a new Terminator mobile game that will land sometime early next year. This new Terminator themed game will actually come in the form of an MMO-strategy game.

This will be a clan-based game where players will be forming big clans with each other. This Terminator game will pull themes, experiences, storylines, and characters from the latest installment in the Terminator franchise, that being Terminator Genisys. Players will be following the struggles of the Resistance soldiers, who are in a civil war-like state over their very limited supply of resources and weapons.

Everything takes place, time-wise that is, right around the time the machines begin to wake up. But, this time the machines don’t have a central command to control their actions. So they are pretty much free to roam around as mass killing squads. Interestingly enough, players will have the option to play as a Resistance Commander or a Skynet Command Node, as the war between man and machine rages on. 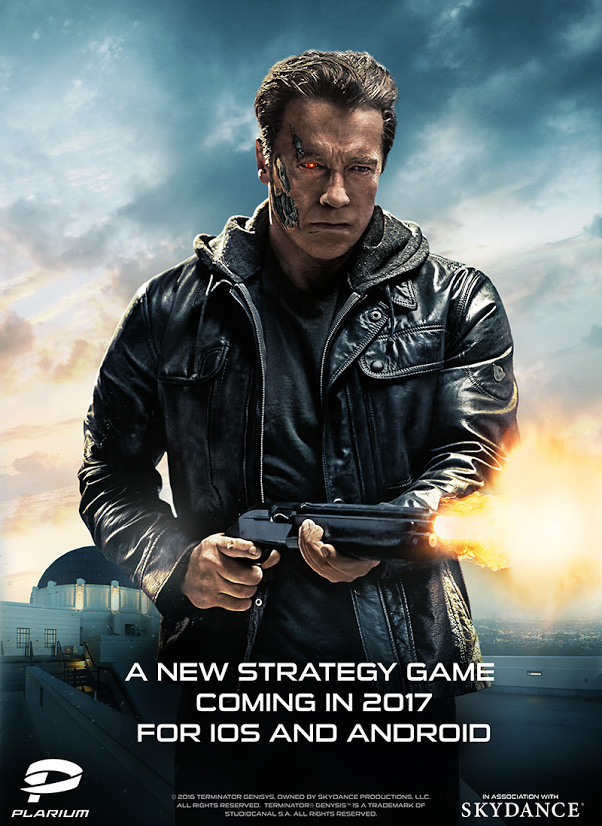 “Mobile games have incredible potential to expand the universe of characters and experiences we have created for a movie and provide audiences and fans with a brand new perspective on our content. Plarium has had great success in creating state-of- the-art MMO titles and we look forward to working with them to bring our Terminator franchise to mobile devices in highly engaging new ways.” – Jesse Sisgold, Chief Operating Officer at Skydance Media

Just in case you haven’t seen it Terminator Genisys was the fifth installment in the franchise. When Resistance Leader John Conner sends Sgt. Kyle Reese back to 1984 to defend Sarah Conner and the future, in an unexpected turn of events a fractured time line was formed. Sgt. Reese finds himself in a version of the past that was very different from the one he had previously known.

Unfortunately all we know for a release date is that this game will be arriving early in 2017. It will be a free-to-play title which means there will be optional IAPs as well. When we learn more, we will post an update.