Grim Fandango Review: An entertaining romp through the afterlife

Grim Fandango is a point-and-click adventure game that was originally developed and released by Lucas Arts for Windows, back in ’98. It was a game that has always intrigued me from afar, with it’s apparent flair that draws inspiration from the Day of the Dead, but I never actually got around to it. With its release on to Android, I was looking forward to sinking my teeth into it.

The game’s story is a quirky twist on the afterlife. All the characters in the game are caught in a nether realm of sorts, through which they must navigate to their final destination, commensurate with how they lived their antecedent life. That part is fairly straight forward. The quirk is that, when someone dies, a bunch of deceased sales people are alerted, and try to be the first “person” that the newly deceased will encounter, so that a travel package of sorts can be sold. The better (morally) the life was lived, then the faster and nicer form of transportation will be available for newly deceased. The most morally approved are given a ticket to take an express train, and the reprobate must hoof it. It’s very oddball, but trust me when I tell you that it really works and is highly entertaining. 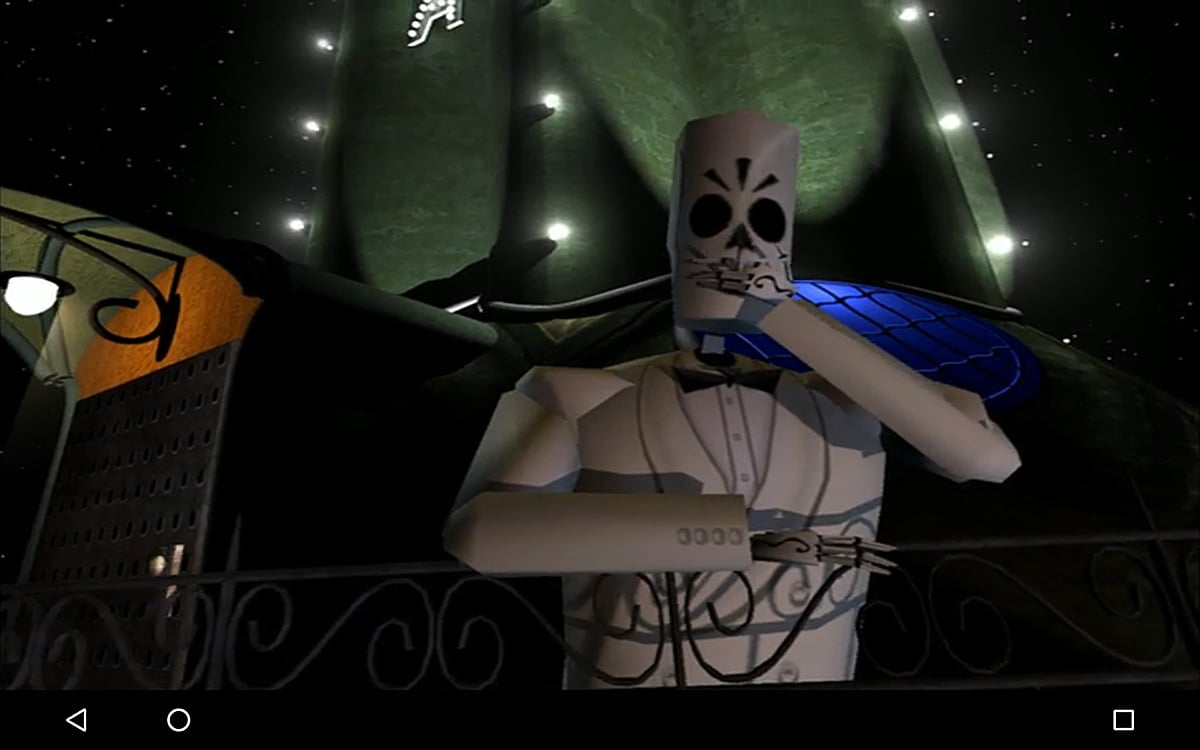 I assumed the role of Manny Calavera, a less than successfully salesman who is trying to earn enough in commission to punch his own ticket on to the afterlife, and escape the “in between” place that he helps populate. The story kicks off with his nabbing a client, who’s soon lost and he sets out to find her. Along the way, he meets other characters and uncovers a plot of dishonesty and systemic corruption. The story (and the game) is broken up into four sections, each of them occurring on the Day of the Dead holiday, a year apart, with Manny in search of the missing client.

The game is played in the classic point and clip format. So, I have to look for objects that I can pick up for later use, and items are kept within Manny’s breast pocket, with a button in the lower right of the screen that allows me to cycle through whatever its contents are at any given time. Tapping on objects or people that I can interact with pops up a small menu that include Grabbing, Using or Speaking, and Looking At. For speaking, players navigate through conversations via dialog options, though typically those come to a predetermined conclusion, regardless of what order I worked through the options. As often as not, I found the dialog entertaining and even chuckled at a few points, despite the fact that their outcomes don’t really change the direction of the story. 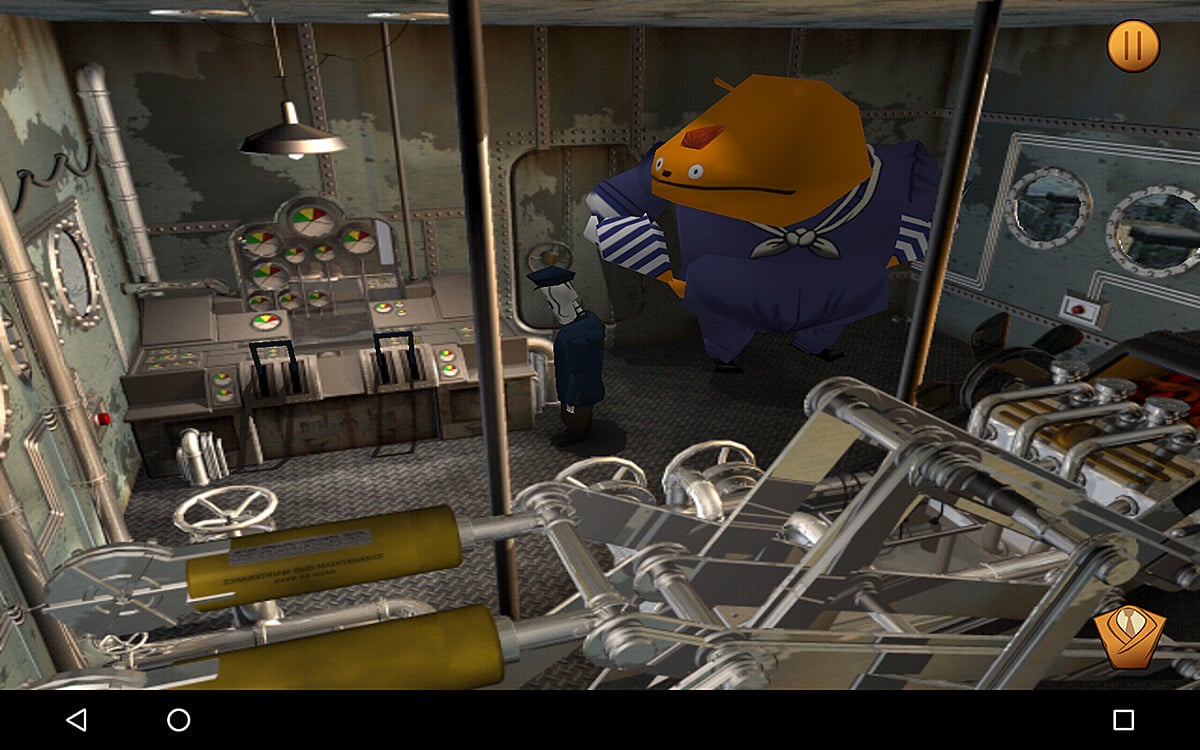 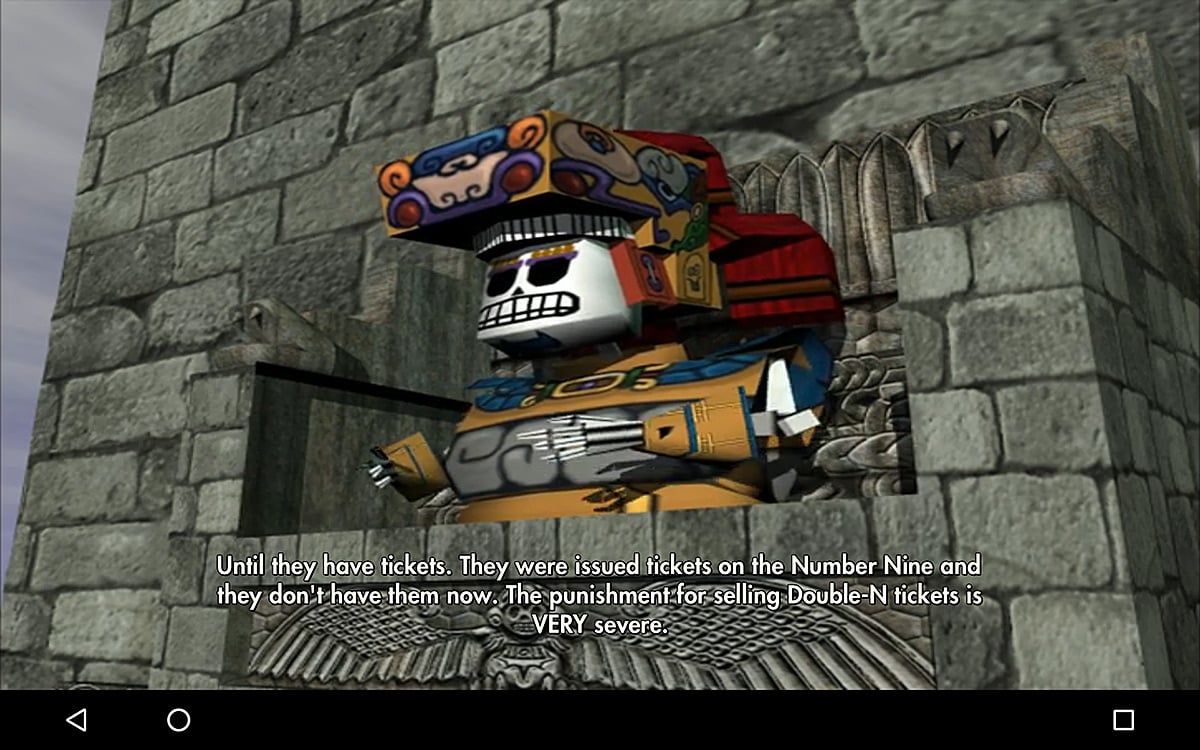 As for the objects and their interactions, that was how the puzzles were solved. Ultimately, Manny’s goal was to find where his client had gone to, and get himself there to find her. So taking one of the locations as an example, Manny was stranded in a port town, so the goal was to get Manny onto a boat that would allow him to give chase. What I was frequently confronted with throughout the game was the difficulty of the puzzles. Having some measure of experience with point and click adventures, I’m no stranger to how they often work. The challenge offered in this one though, was on a completely different level from what I’d experienced elsewhere. Partly, the fact that I found it challenging is on me. I either can see the solution to a puzzle almost immediately, or effectively not at all. But many times, the solutions in this game were quite convoluted, and seemed a touch overkill at points. While they typically made sense in hindsight, piecing them together at times was hinged on (what struck me as) a non sequitur of sorts. So those who enjoy complex solutions will feel right at home.

The soundtrack was frequently the ambient music of where I was, at least for what I noticed. So when in a lounge, I heard lounge music, etc. Though on occasions like cut scenes, it was more dramatic and fitting in its own way. With this being g a remastered release, the graphics have been improved compared to what I’ve seen of the original, so it’s much easier on the eyes. That being said, there were a couple of points where there were obvious visual glitches, with characters disappearing and reappearing, rather then moving smoothly. It only happened a couple of times, but it did take me out of the experience. I’d also wager that the improved appearances contributed to the size of the game, which rings in north of 3GB, be aware of its size. 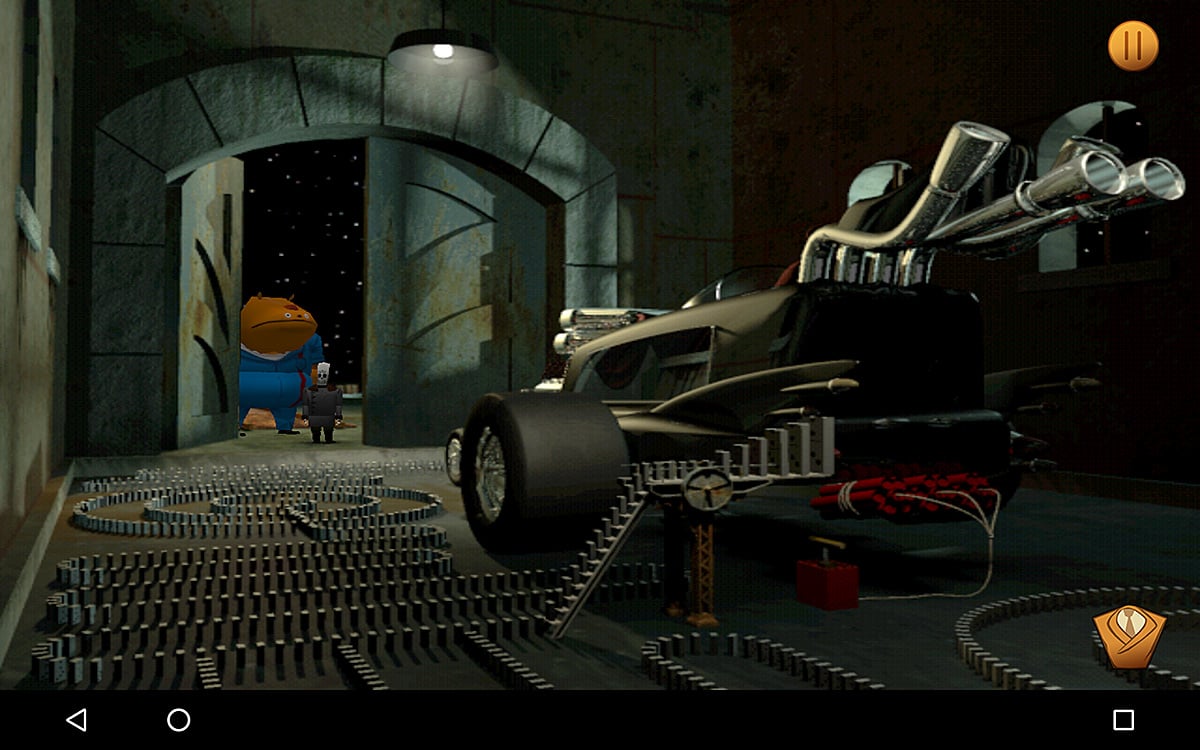 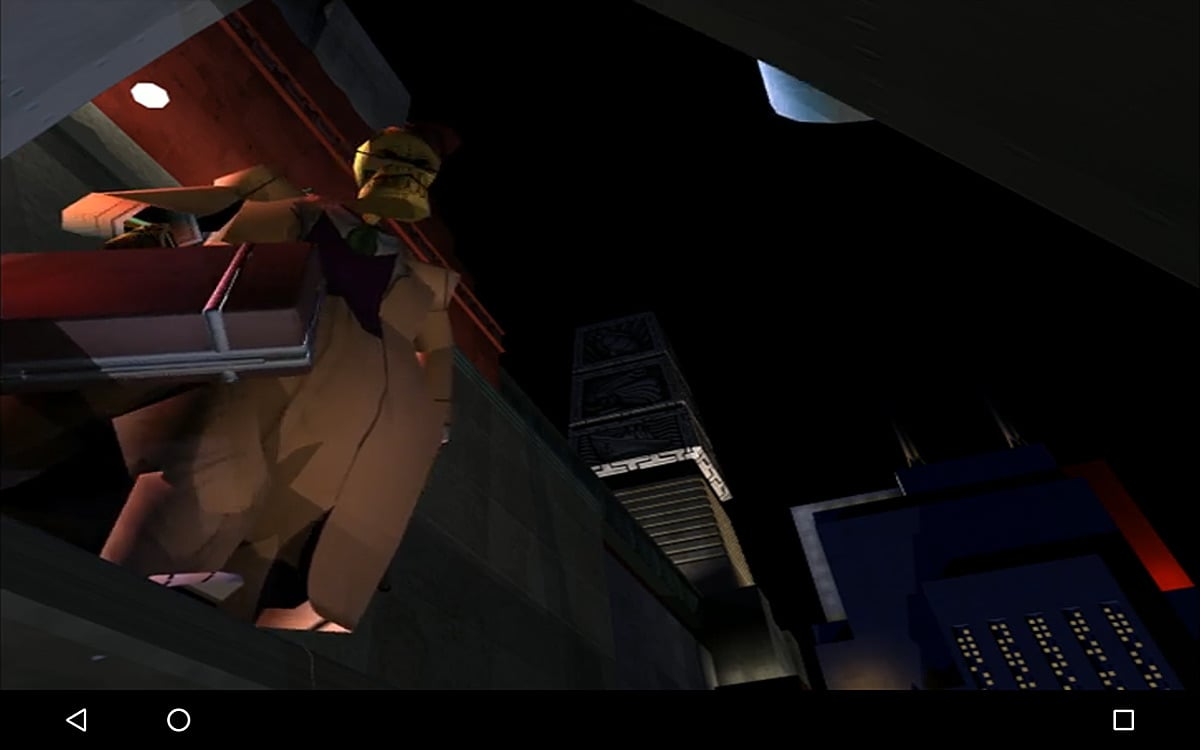 On the whole, Grim Fandango is easy for me to recommend, even with the a graphical glitch or two. If you like point-and-click adventure games, or an entertaining and colorful story, you’ll feel right at home. The challenge is there, but with this game having been around nearly two decades, there are ample walkthroughs and hints that can be found online, so don’t let the difficulty hold you back. The game can be found on Google Play for a flat $9.99.