Bethesda’s wildly popular Fallout spin-off game for mobile devices, called Fallout Shelter, has received a new update today which the company is stating is the biggest update for the game so far. This update, which changes the version to 1.6, adds an entirely new combat system as well as a slew of new quests and more to the game.

For those of you not familiar with this game, Fallout Shelter is a mash-up of RPG, Sim, and Strategy all rolled up into one title that takes place within the Fallout universe. Players will become the Overlord of their own Vault of survivors, and you will need to do a variety of activities to help ensure your survivors actually survive. Survivors have their own stats which can be improved upon through various training activities, and you can send them out into the world to explore, find supplies, kill creatures, and hopefully return alive.

Other survivors will help run the Vault’s day-to-day operations which range from being a cook to provide food to the survivors, to being an engineer or a scientist, to crafting new weapons and armor. You will also need to make sure you can defend your Vault of invaders. That’s the quick and dirty explanation of Fallout Shelter. 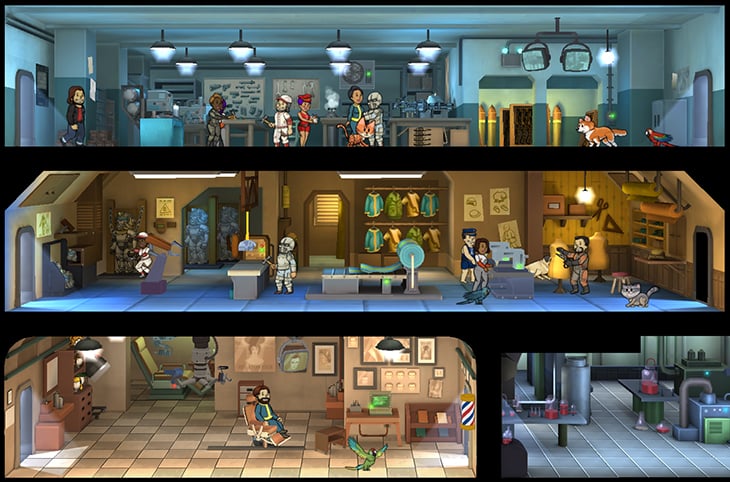 So this update brings a whole new combat system to Fallout Shelter. This is actually directly affected by the new quests and questing system as well. Players are now able to form a group of Dwellers (aka survivors) who can then venture out into the world and explore some of the more well-known locations from Fallout 4 such as Red Rocket Fuel Stop and the Super Duper Mart. You will also be able to check out other abandoned Vaults and buildings.

While exploring, if you get into a fight, players can now take control over Dwellers and direct their attacks to specific targets instead of letting the AI pick who/what each Dweller attacks. You can also try to get a critical hit by participating in a mini-game during combat. Rewards are resources, new crafting recipes for weapons and armor, items and more. If you don’t want to wait for your Dwellers to regain their stamina after questing/fighting, you can now use the delicious and refreshing Nuka-Cola Quantum to restore your Dwellers so you can use them again right away.

If you have Fallout Shelter installed, you can download the 1.6 update off of Google Play right now. For those of you who don’t have this game installed, you can pick up a copy of Fallout Shelter for free. You can also now play the game on PC, so there is cross-platform support now. You will need the Bethesda Launcher to download and install the game for PC. You can check out some of the new features with this update by watching the new trailer below.