Foursaken Media releases All is Lost for Android. It is another highly-polished release from a great developer.

Foursaken Media delivers again. All is Lost was released a few months ago for iOS. We thought it would come out shortly thereafter for Android, but Foursaken Media opted to keep it in development a bit longer, and it worked. The game is fun, challenging and has impressive graphics. Your mission is to get as many of your crew members off a derelict space station as possible. Good luck with that!

A few months ago I had the opportunity to sit down with the team that makes up Foursaken Media. Foursaken Media is a game studio that is located in the heart of downtown Raleigh, North Carolina. The Jackson brothers, Tom, Jamie, Miles and Connor handle everything in the studio, from game concepts to game development, programming, music and marketing. They have their own game engine that they built, which is part of the reason All is Lost was delayed for a bit. We talked briefly about the struggles of developing games for Android, due to the numerous Android devices available. War Tortoise, Heroes and Castles, Bug Fortress, Adventure Company, and Phantom Rift are a few of the successful titles that they have released. All is Lost joins their library of games, and it is one of my favorites thus far. 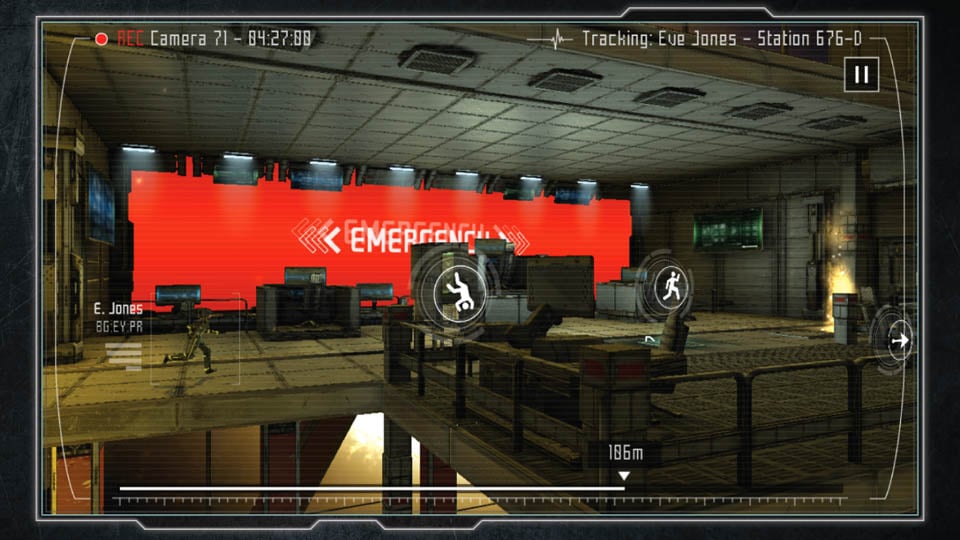 All is Lost is a level-based runner. The game has slick graphics, fantastic immersion when it comes to sound, and a difficulty level that will challenge your ability to rub your stomach and head at the same time. What do I mean by that? The game is a simple platformer, but how your character is controlled, will test your ability to follow simple instructions and test your ability to react quickly. It is wonderful, tough and best of all, only $.99 That’s right, no freemium here. You can drop that $.99 easily, because this game is a winner.

“In the distant future, mankind is scattered across a vast and dangerous universe. The crews of massive space stations live in a constant struggle for survival. How many can you save?” – Foursaken Media

Without much fanfare at all, you are dropped into the tutorial for the game. You are tasked with getting as many crew members off the space station that is crumbling around you. You start off running and you don’t stop till you reach the end of the level. The game is a side-scrolling game, but there is a great amount of depth and detail in how the levels are rendered. I wish there were a free-running mode just so you could stop and check out some of the environments, because the game looks that good. I often met an untimely end paying too much attention to what was drawn in the background. Wait, was that a spaceship docked…? Then I was torched by a blast of flames because I failed to secure that door shut, before jumping over a vent that somehow had been electrified. There is a simulation mode which will allow free-running of sorts, but you never control your character to the point of allowing him or her to stop. They run automatically. 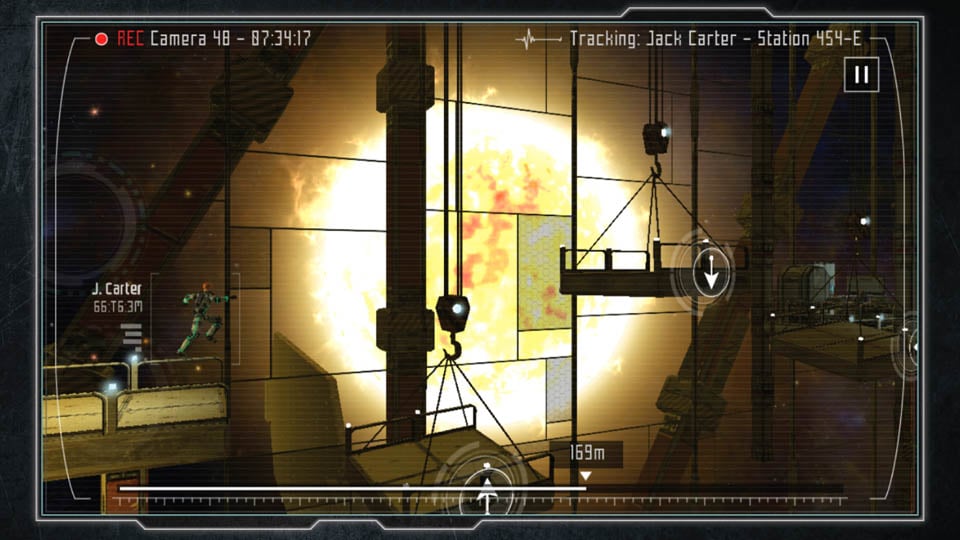 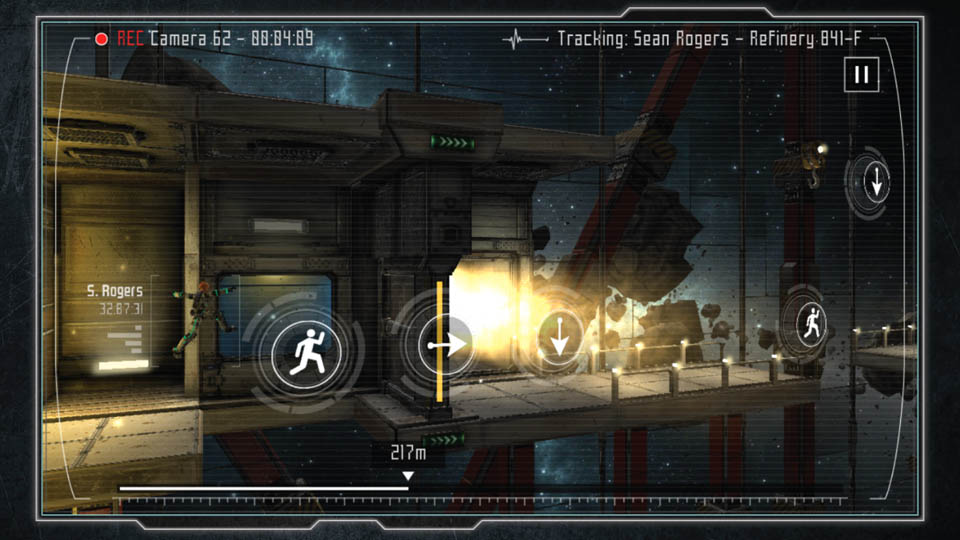 The game controls couldn’t be more simple and effective. When you die, it won’t be because the controls didn’t work. It will be because your brain seized for a minute, or you confused dive-rolling when you should have been swiping up to jump instead. On the left side of the screen you swipe up to jump, or down to dive roll under an obstacle. On the right side of the screen you swipe in the directions indicated on the obstacles. With a very clean UI, you will notice different colored arrows that indicate what you should do. There are doors that will require you to swipe up, down, left and right. In between those requirements are jumps through glass or swiping down to dive roll under an obstacle. All the while, your different characters are looking over their shoulder, to see what is happening behind them. That detail is small, but a really nice animation that pulls you into the game, in addition to the grunts he or she is jumping or dive rolling. 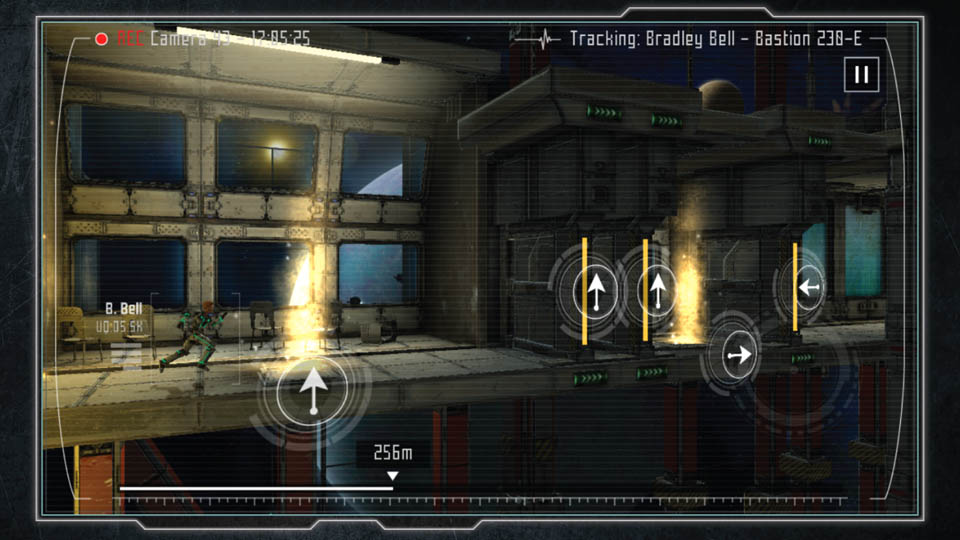 The game will challenge your ability to process information quickly. If you cast this off as another endless runner, you are making a grave mistake. All is Lost has that rare gathering of components that make it a great game. You don’t necessarily see that from the screenshots, but once you play the game, you experience it, and then you are playing it over and over again.The combinations of the obstacles together make it a game that can be tough. Where initially you are jumping and dive rolling, the complexity increases as you have to swipe up to get a hook in the right place just before you jump, or swipe up or down to move a platform in place so you can land properly after your jump. This may occur immediately after a dive roll, or a jump through a sheet a glass that shatters as you quickly swipe to close a door to an engine that has burst in flames to impede your path.

All is Lost Features:

The game has 48 missions to work through and there is a simulator as well. The simulator allows you to play the game as a hologram. This turns the game into an endless runner. You run to see how far you can get before the environment or obstacles end your run. You also can gain rank the more you play the game. All of stats of your missions are kept. It lists the total number of people saved, lost, stations completed, save rate and your simulator score.

If you aren’t familiar with Foursaken Media’s games, then you should give All is Lost a spin. It’s only $.99 and well-worth the price of admission. Keep in mind that the game will challenge your dexterity and the ability to follow basic instructions, but it is wrapped in an aesthetically pleasing package and engaging gameplay. Don’t miss out on All is Lost. Foursaken Media continues to produce great games, and this is a great addition to their catalog.