People will live stream some pretty crazy challenges on platforms like Twitch, YouTube Gaming, Mobcrush, and so on. I’ve personally seen all types of records broken for speed runs in a number of games, as well as people passing out mid-stream trying to break a world records for this or that. It’s pretty entertaining to say the least. Well a streamer by the name of BoarGeneral completed a pretty insane challenge, all of which happened to be streamed live.

The challenge? Start an account in Clash of Clans, with 0 trophies, and to work your way straight non-stop to Legend status, which is basically winning 5,000 trophies. So, he sat down and began his journey which eventually ended 123hrs 26minutes and 50 seconds later. All of this took place over on Kamcord, which is another live gameplay streaming platform similar to Twitch. As word spread, the stream had more and more people watching it, and by the end the stream had been ‘liked’ just over 3.7 million times, and had 33,258 people watching, making it the top channel on Kamcord. 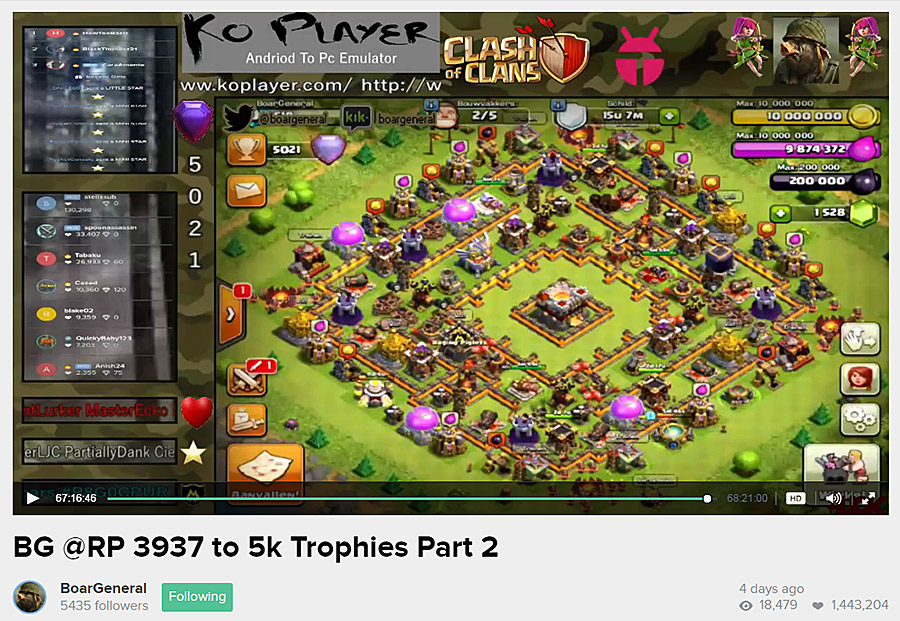 The software he used to stream all of this live the entire time was Koplayer, which we have talked about in the past. BoarGeneral teamed up with Koplayer for the stream it seems, and so one of the PR companies did a short post-stream interview with him. For those of you not familiar with Koplayer, this is an Android emulator for PC, so that you can play Android games but on your PC instead of on your mobile device. This can be good if you want to do things like stream your gameplay live but don’t have a Shield device or don’t use one of the other apps available like YouTube Gaming or Mobcrush.

If you’re interested in checking out the interview, we have included it below. If you want to check out Koplayer, you can do so by heading over to their official website, and grabbing a copy of Koplayer is free. I will say that managing to survive 123 hours of Clash of Clans straight is a pretty big feat in itself.

Hi, BoarGeneral. Could you please introduce yourself firstly?

BoarGeneral: I’m BoarGeneral a streamer from the United Kingdom. And I’m also a partnered streamer on Kamcord. Which is where I do all my streaming on. I’ve been streaming on their platform now for 6 months on there and I been partnered on there for nearly 4 months. And the kamcord community is awesome there. I will be now that I’ve done this major push to 5k trophies look for a different platform to stream on also. At the moment I stream mainly Clash of Clans. I’m an addict of the game and also a high level player. And I’m in a family clan. We have 4 clans in the family Angry boars lvl 10. Raging boars lvl 10. Raging piglets lvl 4 and Baby boars lvl 1. I’m currently helping Raging piglets our feeder clan to the higher leveled clans spotting for new attackers. That can be moved up also I’m there to help them with troop donations and getting there clan lvl higher. Higher lvl clan can attract new members easier then a low level clan. At the moment it does take a lot of my time up but I love it so much I don’t mind. And because it’s clash and everyone loves clash. This attempt from 0 to 5k took two parts the first part took 53 hours 30 mins. Unfortunately I fell asleep on that one. But the second part was 68 hours and 17 mins that one was the record breaker on kamcord the previous was 67 hours. So all in all the 6 days I have streamed for 120 hours of it pretty epic that is. Some might say that’s crazy and there right. But it’s a nice crazy when I’m playing my favorite game.

BG: 0 to 5 k trophies had never been done to my knowledge. So I thought it was worth a try. I always wanted to do something like it the ultimate push to 5k trophies. I did think it would take a shorter time to do the last 1000 trophies was the worse time matching for a battle took to long the clouds were thick. Technically the option is there to do it. But I think I’ll leave that one alone for a while.

What is your most difficult challenge in this live stream?

BG: Staying awake was the hardest part. But with the help of the viewers we pushed through it. They were awesome.

Is this your limitations? Will you challenge more crazy things in future?

BG: I may do crazy things in the future. But I’m going to rest for a bit before I think of something to do. Become No. 1 player in the UK standings needs to be done for me especially. Last time I tried I got to 4th best in the UK standings.

Does this live stream achieve your ideal results?

BG: Yes it did. I got two goals achieved I got to 5k trophies legendary league that always and achievement. And I also broke the kamcord longest stream record.

During the whole process of winning 5k Trophies, when did you meet the biggest bottleneck problem? Do you have any advice for other players?

BG: The Biggest hurdle was the sleep barrier. And the final 1K trophies. Advice is keep hydrated and eat well during it.