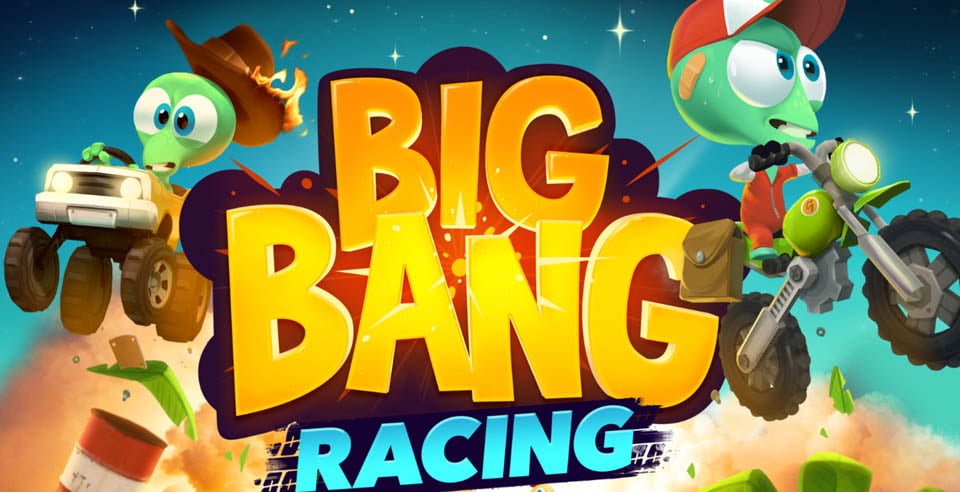 Trials racing games were all the rage a few years ago. They are still somewhat popular, but their arrival in the Play Store has diminished a bit. If you enjoy those types of games, then you should check out Big Bang Racing from TrapLight. The game is fun, has plenty of content, challenges and cute and engaging graphics. The controls are spot on too, which helps with these types of games. Though the game has been out for a few weeks, that doesn’t mean it isn’t worthy of your attention.

Trials type games have to strike a very fine balance. They can’t be too hard, or players will give up playing the game. If they are too easy, people will quickly lose interest. Big Bang Racing strikes the right balance with excellent gameplay, a wide-array of tracks, online racing and simple to use and well-implemented game controls. It also doesn’t hurt that the main character is a cute little alien, that unfortunately, due to some of the obstacles on the courses, meets his timely end in a multitude of ways. You can share replays of his demise with your friends too. 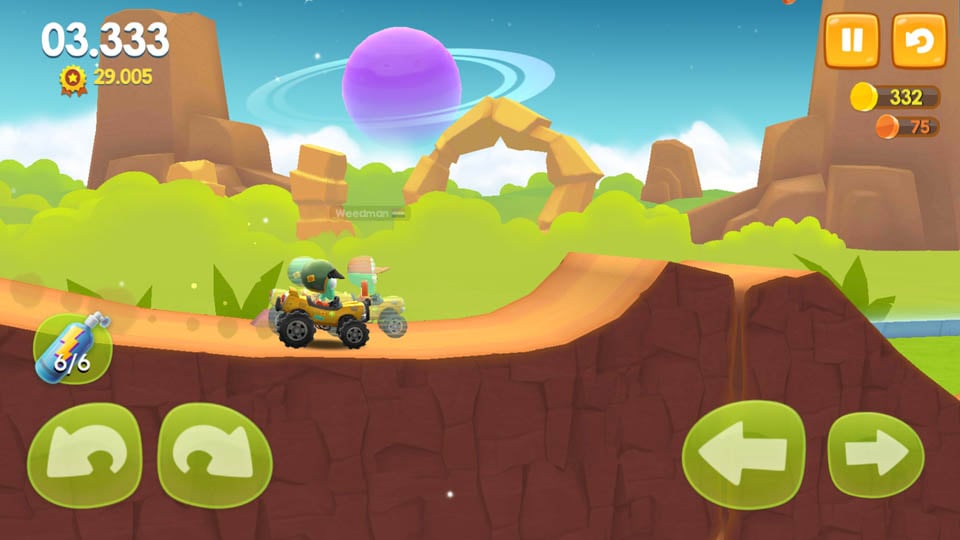 “Outrun players around the world in action packed races, or collect treasures from puzzling adventure tracks. Create and share your own levels, upgrade your rides, and customize your characters with the swaggiest hats in the galaxy.” – Traplight Ltd.

There is an amazing trials racing game that never made it to Android. Bike Baron, which was released on iOS in 2011 by Qwiboo and Mountain Sheep was excellent. I am still hoping one day it will come to Android. Nevertheless, Bike Baron had tons of tracks and plenty of users because of the quality of the game, and the game’s ability to have its players make their own tracks. Big Bang Racing has the same quality of gameplay and also the ability to create tracks. The track editor is pretty easy to use too. Currently, there are over 20,000 tracks. Not only can you create and race on other peoples tracks, you can also rate how much you like the tracks. In the era of social gaming, it is not surprising that you can add a thumbs up or down, on something that someone else has created for your enjoyment. I have come across some really neat tracks that are enjoyable, and others that are brutally difficult. Much like the game Mekorama, having an active social community surrounding the game, greatly extends the life of the game. 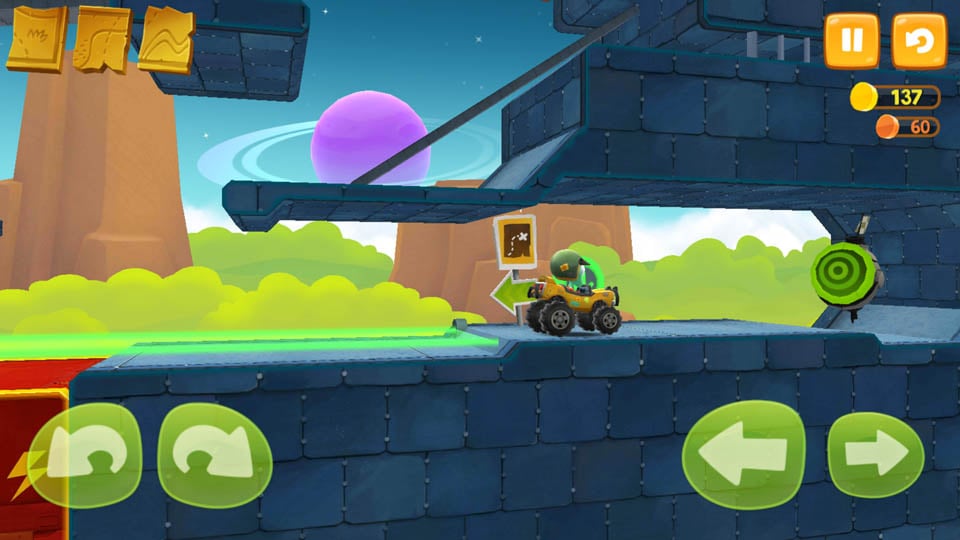 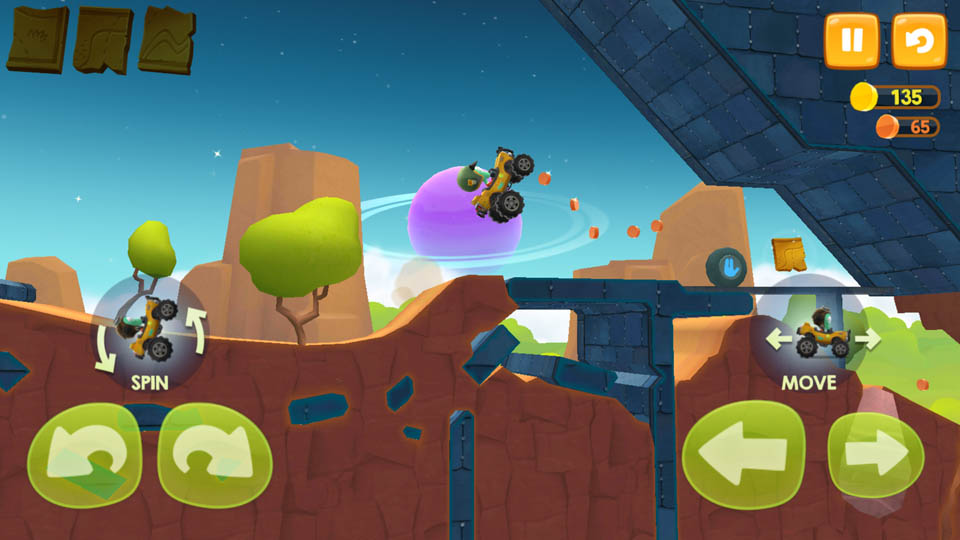 Within the game you have two different vehicles that you will control. You will either control a dirtbike or something akin to a dune buggy. Each of the vehicles are fully upgradeable. Upgrades become available when you win your races, or when you unlock adventure chests. As with most free to play games, the chests are unlocked after a period of time has expired, or you can do so using coins/gems. Once unlocked, various parts of your vehicle can be upgraded. It also costs coins to install the upgrades. During my time playing the game, the free-to-play structure did not feel forced. You can enjoy playing the game without the pressure of feeling like you have to spend your personal cash.

The game is easily set up for you to enjoy, which means simple controls. The on screen buttons include arrows on the right side of the screen for controlling your vehicle left and right, and two additional arrows on the left side of your screen that control your vehicle’s rotation while in the air. Being able to deftly control your vehicle will mean the difference between winning and losing races, as well as not being electrified by obstacles or crushed by other elements on the course. The controls work extremely well and enhance the gameplay quite a bit. You never feel like you have to fight the controls to make your vehicle do what you want. 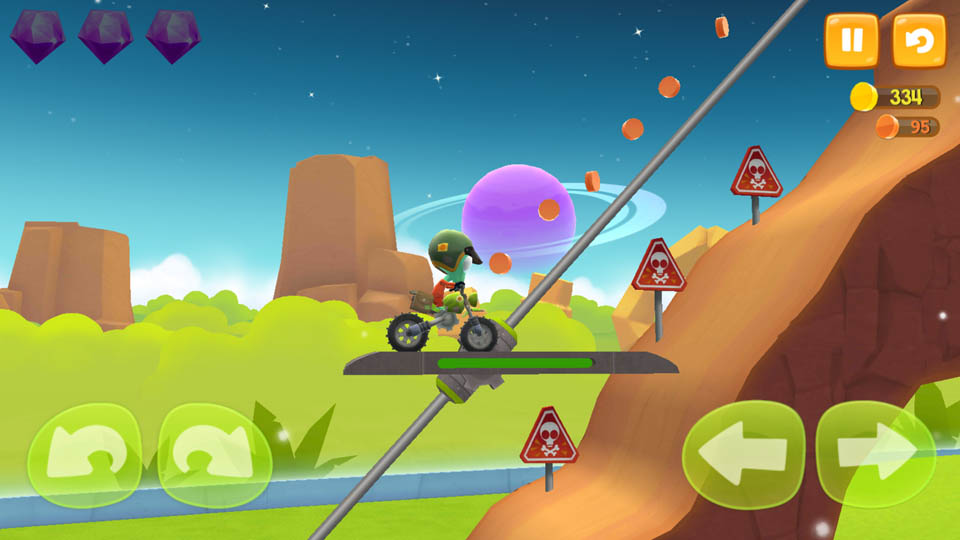 There is an element of adventure to the game as well. While you are playing the campaign portion of the game, you will encounter courses that require you to find three different pieces of a map. Once you have found all the pieces of the map on a level, you are able to unlock a chest. As mentioned before, the chests allow you to upgrade your vehicle and more. Typically when a chest is unlocked you will acquire gold coins, nitro, cards for upgrades such as steering wheels, turbo chargers, brakes, etc. Other key pieces in the chests include elements for building your tracks like exploding barrels, treadmills, elevators, trees and fences. While you are playing the game and amassing all of these different parts, it is fun to be able to go into the track editor to see what you can put together and create. Think of it as Minecraft for racing.

There is a lot to love about Big Bang Racing, from user-generated content to upgrading your vehicles to some really amazing courses. As a matter of fact, one course still sticks out in my mind as being brilliant. You had to find the three different map pieces, but all of the pieces were buried in the soil. The course was multi-tiered. You had to use your off road buggy to dig in the soil to find the map pieces.  Watching the soil deform and placing your vehicle just right to fall from a precipice above to catch the piece of the map on the way down is still memorable. Seeing what other players come up with for courses is just part of the fun.

If games like this appeal to you, or creating levels for other gamers is your cup of tea, then by all means download Big Bang Racing. Plus, if you still miss not having Bike Baron on your mobile device, Big Bang Racing will go a long way in making you feel better, about having a game that is just as enjoyable.