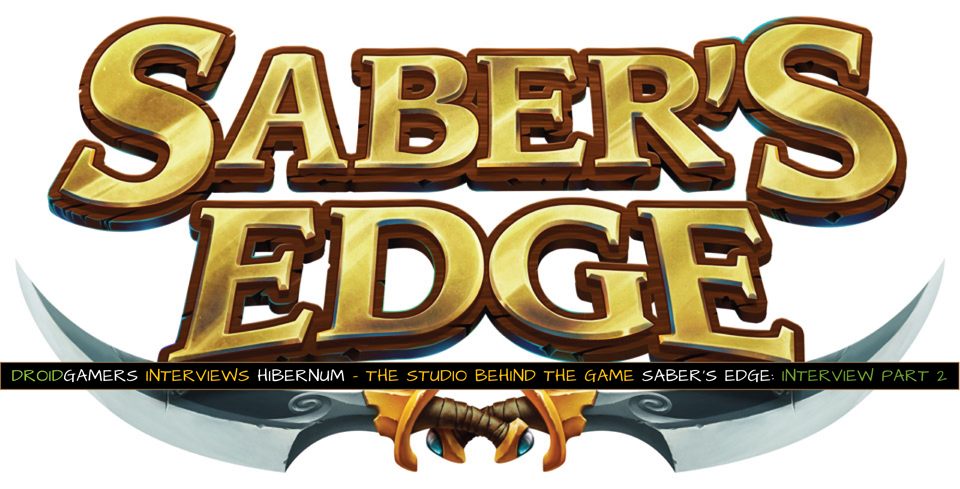 Earlier this year we had the opportunity to talk with Hibernum, the the team of talented individuals behind the soon to be released game Saber’s Edge. Fast forward to a few months later, and Saber’s Edge has been released worldwide for Android and iOS devices. A fascinating world has been created for this unique puzzle/action/strategy game. We were fortunate enough to talk with Hibernum and the game’s producer, Marc-Andre Larose about the creation of this intriguing amalgamation of game genres.

Editor’s Note: If you missed Part 1 of our interview with Hibernum, you can read the first part of the interview here.

Jaymes Carter (DroidGamers): Let’s talk a bit about Saber’s Edge. First, let me say it is an amazing looking game. I have enjoyed playing the game thus far. I am pleased with the depth of strategy that is layered in the game. When I first heard about the game, I was a bit disappointed, because it was an exclusive for the Amazon Fire Phone/Tablets. Was there a particular reason to showcase the game on the Fire devices?

Marc-Andre Larose (Hibernum: Producer of Saber’s Edge): Originally, it was a Hibernum designed and Amazon published game. So we were working together on the game and it was designed to be an exclusive on their platform. After its initial release on Kindle, the game’s potential clearly showed that we needed to push it to other platforms. Hibernum acquired the rights to the game and we are now the developer and publisher of the game, and we are looking forward to strong success on multiple platforms. 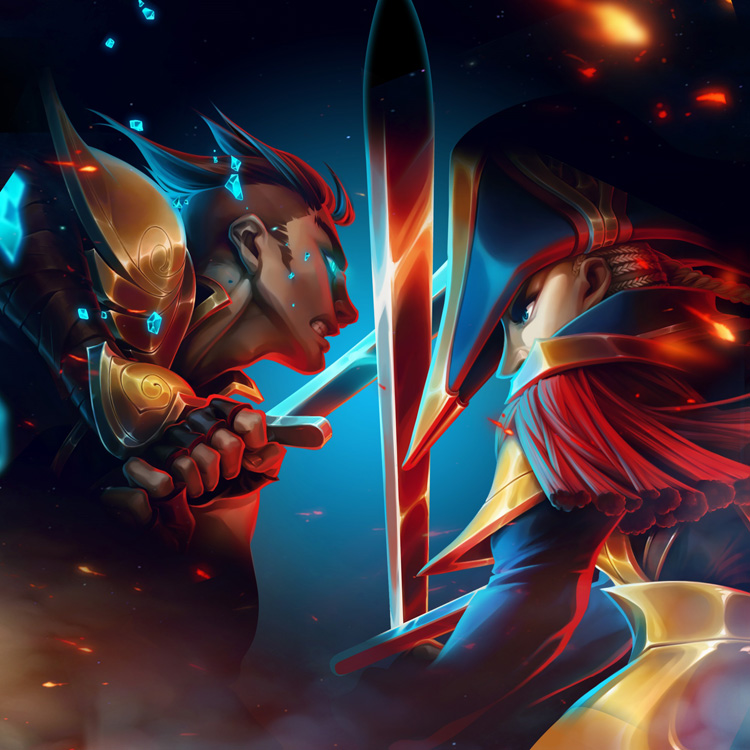 Jaymes Carter: We are glad the game has finally released. Once it went into soft launch we kept checking to see when it would finally hit the Play Store. Can you give us the backstory on the game, the concept and what you hope gamers get out of it? Everybody loves pirates, right?

Marc-Andre Larose: Saber’s Edge will put players in the middle of an original universe built around three distinct worlds: the Jungles of Vertalia, the Dunes of Arridion, and the City of Lordsbridge. Players take on the role of the leader of a pirate crew who navigates hundreds of different islands and locations in pursuit of treasure, adventure, and freedom. The pirate crew was originally formed by the three champions of the Seven Skies: Eliot, Jane, and Viktor. Along your journey, you will encounter five different factions: the Barbary Knaves, the Thunder Horde, the Sharkoori Raiders, the Burnished Plunderers, and the King’s Order.

In terms of gameplay, we really wanted to create a deep role playing game with fast, fun combat. The concept is easy to learn but with lots of strategy and depth. Beyond the puzzle combat on the battlefield, the real key to success will be preparing your crew members before the fight. We have unique characteristics that can be taken into account for each crew member, including how they work together.

Jaymes Carter: What is the team make-up for Saber’s Edge? How many people would you say are involved from Project Managers, to designers, programmers, artists, writers, musicians and marketing?

Marc-Andre Larose: Saber’s Edge vision and values were pretty clear from the start and Hibernum knew that the design and art direction would be a key success factor for this game. This is why we believe Saber’s Edge has something unique to propose to the current market of Match-3 RPG hybrids. The team was comprised of 30 talented members. That includes all disciplines needed to develop and publish Saber’s Edge. Hibernum’s talent is clearly shown in this product, from gameplay and design to our 3D art direction. 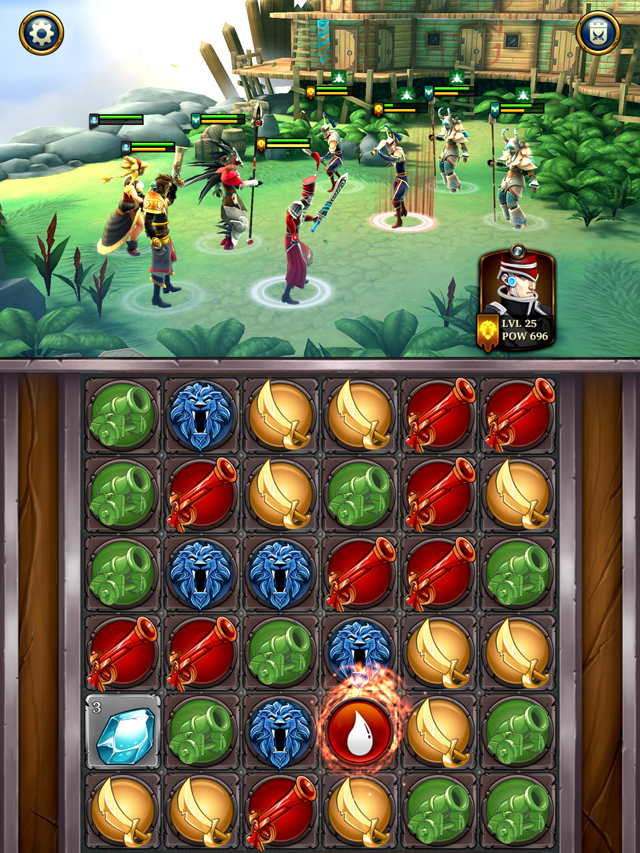 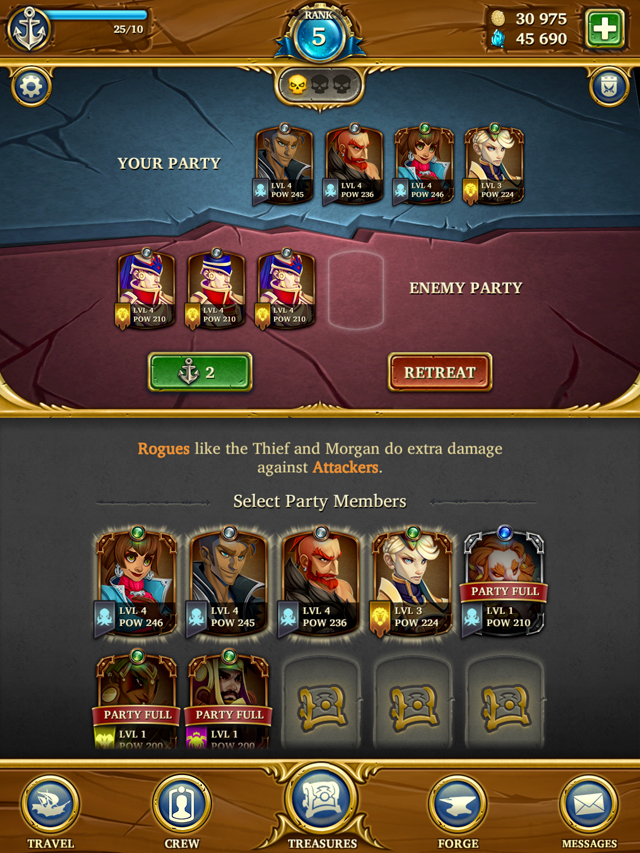 Jaymes Carter: Thirty team members seems pretty massive, but you are correct, I think the game really shines when it comes to the quality of the final product. The artwork and story could easily be presented in a graphic novel format. We are seeing quite a few games moving in that direction. Saber’s Edge would be perfect for that.

Saber’s Edge is a match-3 type game, but really so much more. I do enjoy match-3 games, but this one is a bit of an RPG and has so much action in it. The rotating board, which is a brilliant game mechanic adds a nice touch of flair to the game. It takes strategy to a completely different level. Why start with a match-3 type game? Is it because the genre is probably the most popular for casual gamers? Is that the target sector you are primarily trying to reach?

Marc-Andre Larose: Overall, Saber’s Edge gameplay has evolved to focus on its deep RPG mechanics, while keeping the puzzle combat fast and fun. Obviously, we had to consider the actual market and what kind of target audience would fit well for sustaining Saber’s Edge for a long period of time.  Without giving too much away, we designed the game based on adding depth to known and loved gameplay mechanics. We wanted to design a title that had the best of both worlds. A game that was simple to pick up and play, but had strategy and details really worth a player’s time to discover and explore, so they would enjoy the game for weeks after downloading it.

Jaymes Carter: The first game that really made me take notice of how fun an action match-3 game could be was Evolve: Hunter’s Quest by 2K Games. It was more of a companion game to the console game that was on XBox and PlayStation, but it was pretty incredible. Saber’s Edge appears to be similar, but with much greater depth and control. Can you explain a bit more about how you play the game and level up your characters and weapons?

Marc-Andre Larose: You are right. With a roster of over 35 characters, you get to pick four characters of your choice in each battle to fight against the different factions who stand in your path. Each battle rewards players with experience & gear. The more you play, the stronger your crew will be. You will also be rewarded with treasure that improves your crew. 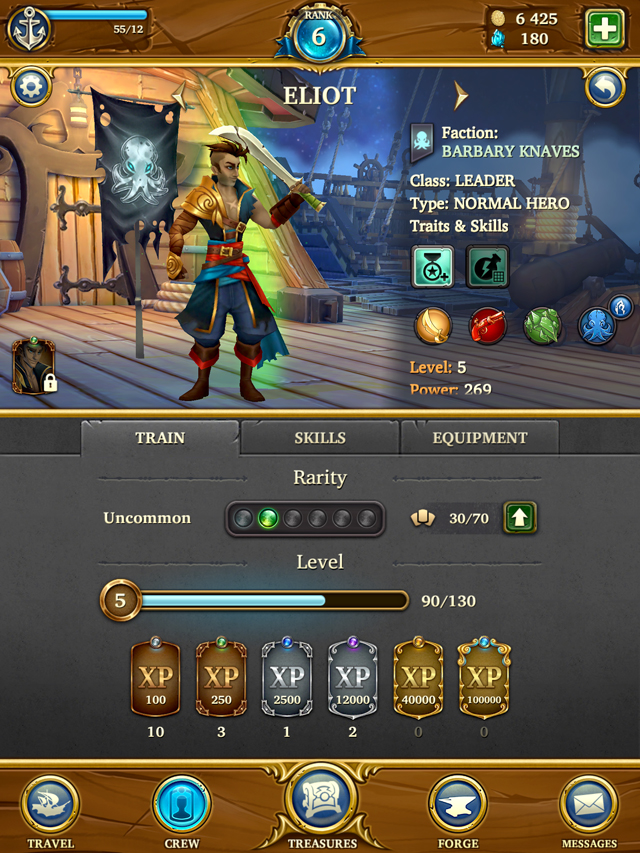 Jaymes Carter: Crafting of weapons also appears to be an important part of the game. Can you tell us more about that? It almost makes me feel like going on a dungeon quest to find the best of the best.

Marc-Andre Larose: To aid with upgrades, Saber’s Edge features a special forge where players can combine their existing items into new, rarer weapons. As a weapon evolves, its stats and physical appearance also change.

Each crew member is equipped with a unique gear set comprised of different weapons and items. As that gear set evolves, the crew member also increase their strength. Characters with greater gear sets undergo physical changes and evolve, eventually unleashing their Dark Side which is a fiercer, more powerful version of themselves. 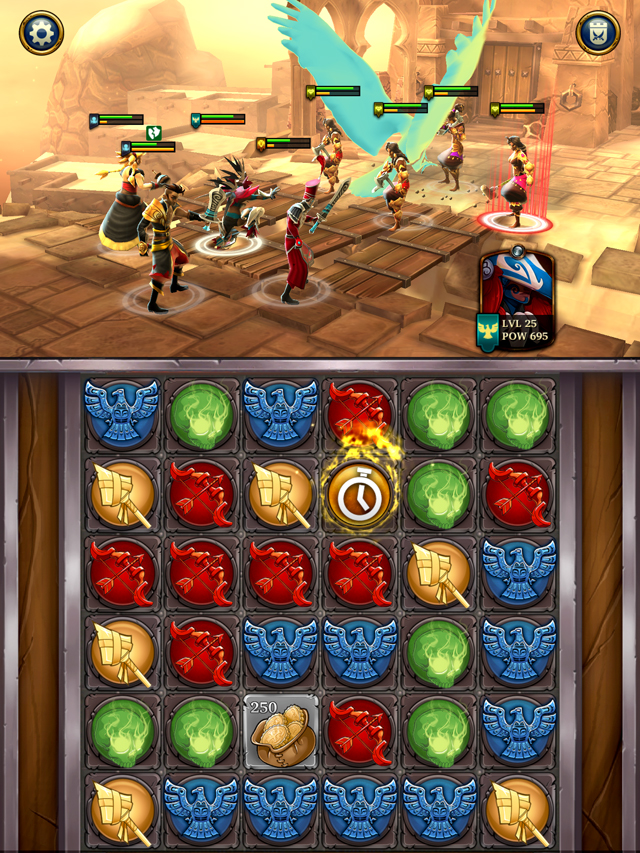 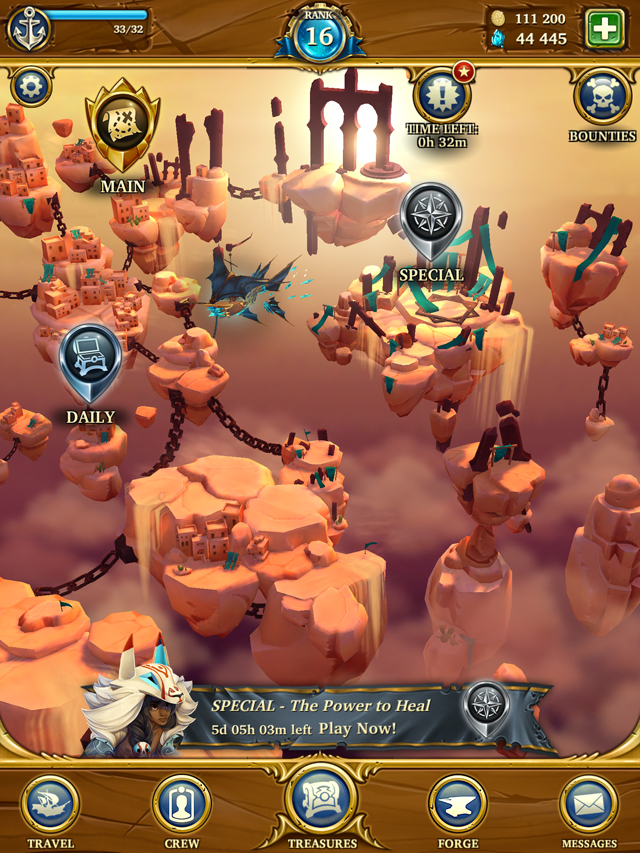 Jaymes Carter: Interesting. Maybe for Saber’s Edge 2, you could give gamers the opportunity to choose which side they want to be on, kind of like the moral choices presented in Bioware’s game Mass Effect. That would be pretty amazing don’t you think? Okay, so first I suggested a graphic novel of Saber’s Edge, and now I have hinted at something for Saber’s Edge 2. For our DroidGamers readers, I have to say we know nothing about a Saber’s Edge 2. I was just making a suggestion. However, if you do see either of those things come to fruition, you heard it here first!

Team based strategy is also an element that is necessary to understand in Saber’s Edge. Can you tell us more about the characters in the game and a bit of their backstory? I understand there are over thirty heroes in the game. Also, the cast of characters appears to be quite diverse, which is important.

Marc-Andre Larose: Correct, each character has their own personality and backstory. The player will discover who they are by playing them and achieving character specific side quests. Each character has different abilities that makes them unique. This is where the strategy begins. The player must find the best team composition according to which opponent they are facing before each battle.

Jaymes Carter: Saber’s Edge is free to play. When we mention that in our articles, a lot of people get extremely frustrated to hear it. Why has Hibernum chosen this monetization path? I have played great free-to-play games and then there are those that appear to be setup to get you to spend to play. How do you balance that and enjoyable game play that is actually free?

Marc-Andre Larose: Our team’s goal has been to give players a fun, full game while giving them good reasons to pay if they are enjoying their experience. You can certainly start Saber’s Edge and really enjoy the experience without having to spend. But for players who are really enjoying our game and story, we hope they invest in the title, just like we invested in bringing it to life. All players will have access to the full content of Saber’s Edge, but if anyone feels so inclined, they’ll be able to enjoy that content faster. We aim to offer an equally balanced experience for everyone in our audience.

Jaymes Carter:Some games go the route of more of a demo, and then pay to completely unlock the game. A lot of gamers favor this. Are the two monetization paths that different, and if so, why?

Marc-Andre Larose: It was a mobile trend around 4 – 5 years ago. However since free to play became the dominant business model, the demo concept became almost obsolete. We considered numerous monetization strategies and we ended up going with the one we believe offers the best overall value for every user … while giving us the best opportunity to keep creating new content, to improve the game and to support the title in the long run. 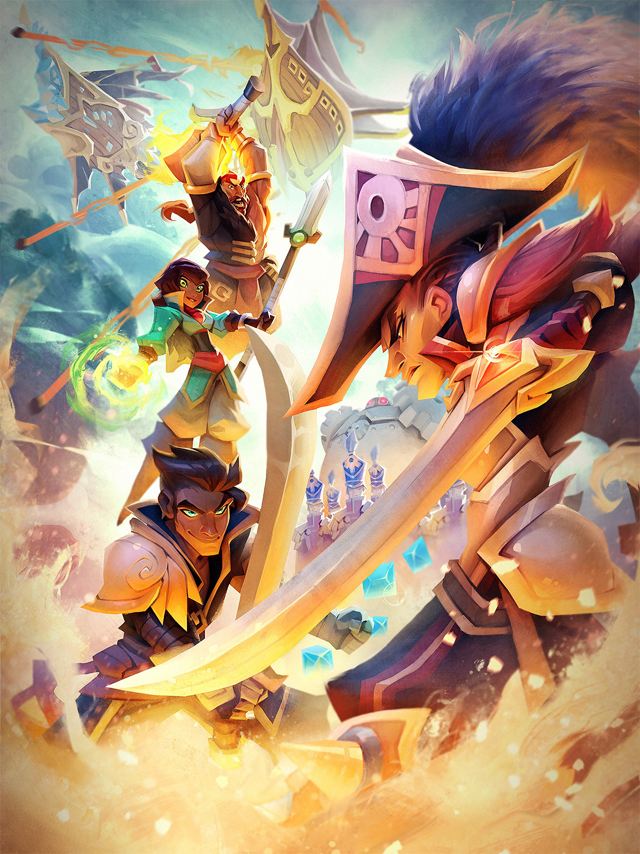 Jaymes Carter: I see that an internet connection is required to play. Some of our readers in different countries complain about this because their internet connections, or the cost of data. It doesn’t bother me as much, but I admit that I do like having the ability to play offline. I would say most people don’t have unlimited data plans. Why is a constant internet connection required?

Marc-Andre Larose: The reason is obvious for a developer but not necessarily from a player’s perspective. It’s largely for security reasons. Our user base is important for us and we want to make sure everything is confidential, protected and verified on the server side. It also allows us to always keep the player’s progress saved, at every moment, even if he uses multiple devices. This is why an internet connection is required.

Jaymes Carter: Marc-Andre, thank you and the rest of the team at Hibernum for speaking with us about Hibernum and Saber’s Edge. We can tell a lot of hard work went into the game. The high production quality is evident in every panel of the game. We wish you much success with it, and look forward to the other games that Hibernum will certainly be releasing in the future. We also thank you for supporting the Android platform. It is always good to have a variety of choices in genres of games to play. We like how Saber’s Edge takes many of the ones we enjoy playing and mixes them all together.

If you want to play Saber’s Edge, you can download it for free in the Google Play Store. If you enjoy puzzle games, strategy games or action games, then Saber’s Edge has plenty to offer you.