Hearthstone’s Arena will be getting some major changes soon

Hearthstone players who regularly participate in arena matches will be needing to relearn a lot of the mechanics in the near future. This is because Blizzard will be overhauling the arena system within the game, as well as removing a number of cards which will no longer be usable in the arena. So there will be a number of deck modifications that you’ll probably need to do as well.

All of this was announced over in the newest Hearthside Chat post on the Hearthstone blog. The main reason for the changes falls into the realm of providing more varied experiences within the Arena mode for players. One of the changes coming will be in class balancing. According to Hearthstone associate designer Dean Ayala, the top two classes are Rogue and Mage, switching back and forth as the top class to play depending on the content update at the time. Coming in third is the Paladin, and the rest of the six classes falling in line after that.

So class balancing will be one area that will be getting tweaked a lot, so that there will be more variety in the matches. As of right now, the chances of a player running a Rogue or Mage deck are high, and if you aren’t running one, you’ll be going up against a lot of them. In order to accomplish this, the first thing will be the removal of a number of cards, such as C’Thun-synergy cards and Purify. Even though Blizzard will be removing cards, they will be avoiding removing powerful spells and iconic cards to keep the unpredictability. 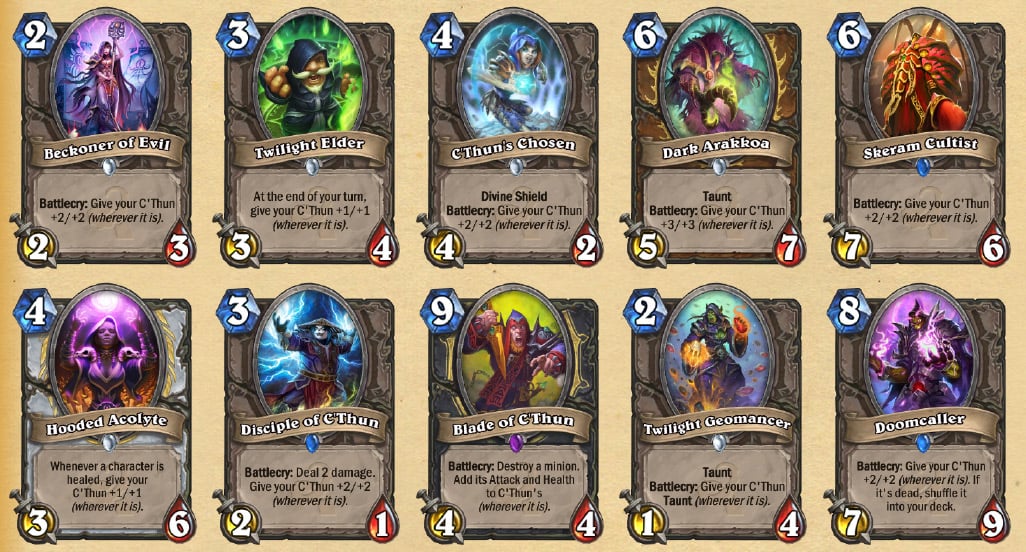 Interestingly enough, the three classes having the least amount of cards removed are Mage, Rogue, and Paladin. There are some other guidelines Blizzard is following, but here’s the list of cards being removed:

This is what Blizzard will be doing when the Arena changes arrive, however the company is looking at some other options as well, such as drafting by card rarity or the “ability to adjust the rate that individual cards show up in your draft depending on a designer input value”. If either of these options are chosen, it’ll be awhile before they are implemented since there will be a lot of work that will need to go into it.

In the meantime, this is the more immediate solution Blizzard has opted to go with. These cards will be removed when the Arena changes are pushed out, which will happen pretty quickly, although no specific date was revealed as of yet. So, do you think this will help? Let us know in the comments below.