Baron is a soldier who specializes in raining destruction on his opponents mainly through ranged attacks and burst damage. His main weapons is his rocket launcher, but interestingly enough, even his basic attacks have area-of-effect damage. As you build him up throughout a match, he can essentially become a walking artillery unit, but even though his movement is slow, he has a jump skill (using a jetpack) that can boost him ahead in distance when need be. His ultimate ability calls in an orbital strike which lands a large amount of damage in the target area. 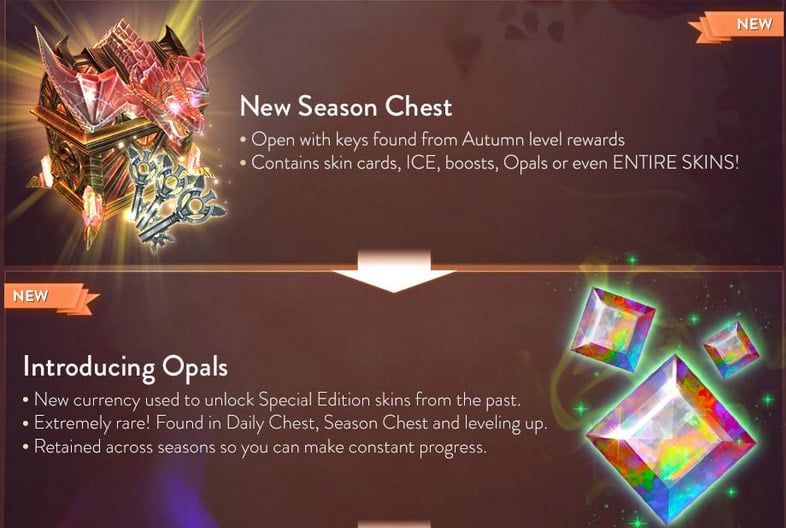 Outside from the addition of Baron to the game, Vainglory has a few other new features with this update. There is a new seasonal chest which contain skin cards, ICE, Opals and more. You can get keys for these chests in the Autumn level rewards. Speaking of Opals, these are also a new addition to Vainglory. Opals are essentially a new currency that can be used to unlock Special Edition skins that are from the past. However, they are extremely rare but can be found in Daily Chests, Season Chests, and through leveling up. You don’t have to spend them right away as you retain them across seasons.

Daily Chests have been altered and now improve as your Autumn Season level rises. Daily Chests contain ICE, boosts, glory, and more. They also contain keys to Season Chests. Another addition is that players can collect ‘sunlight’ which will boost the rewards you get from things like Daily chests.

All of this is now available and can be accessed once you download and update your Vainglory game.