Looty Dungeon is now available to download in the Play Store 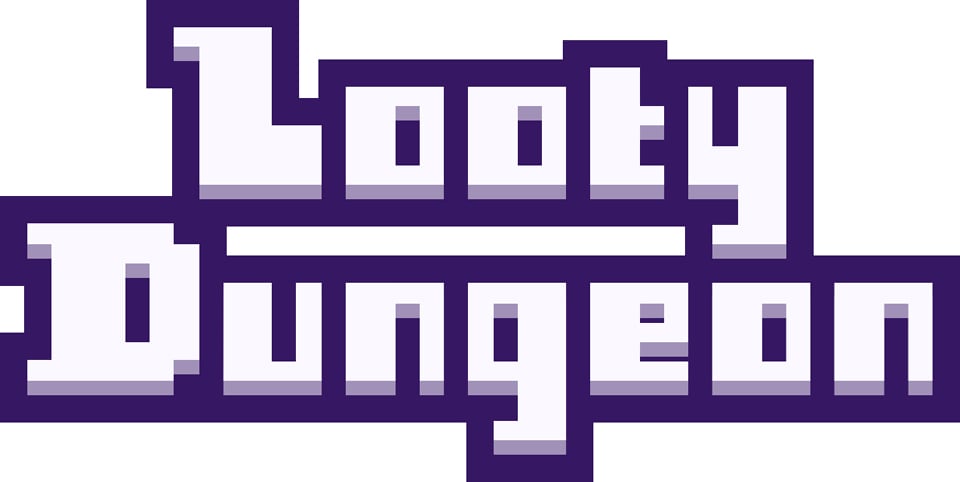 Looty Dungeon is the next hit from game publishers Yodo1. If you have heard of a little game called Crossy Road or Rodeo Stampede, then you are familiar with their work. Looty Dungeon is a bit different in game play, but is just as fun and engaging to play. I like this one a lot!

Yodo 1 has teamed up with one of the neatest named game developers I have heard of in a while. Taco Illuminati is the game studio behind Looty Dungeon. Three gentlemen from Austin, Texas, have delivered a game that I have been enjoying for just over a week now, since it has been released in the Play Store. They have created a game that shouldn’t be missed by those that enjoy a good dungeon crawler. In a similar design approach, with scaled down graphics in games like Crossy Road or Rodeo Stampede, you find a game that is well worth exploring. Even with simpler graphics, you can tell that they took the time to put the detail in all of the right places. You will surely be impressed by the art on your mobile device. Kudos to Yodo 1 and Taco Illuminati for pulling this off. 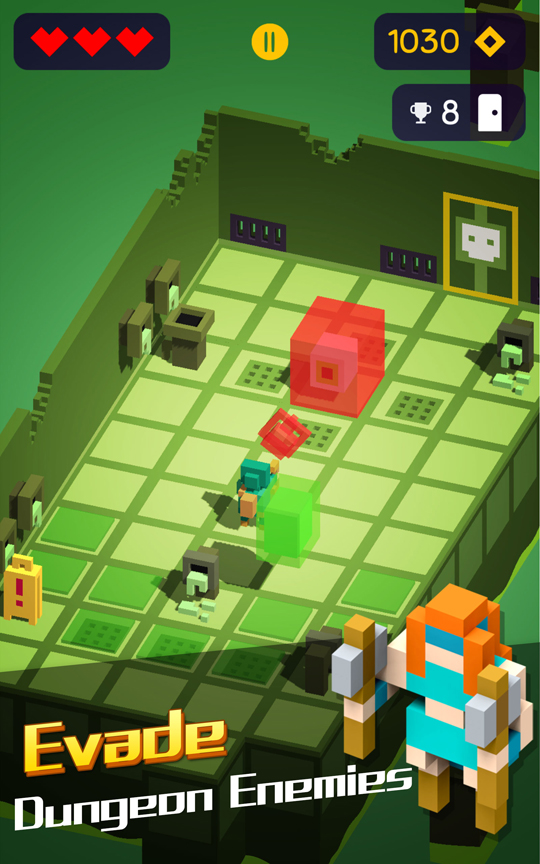 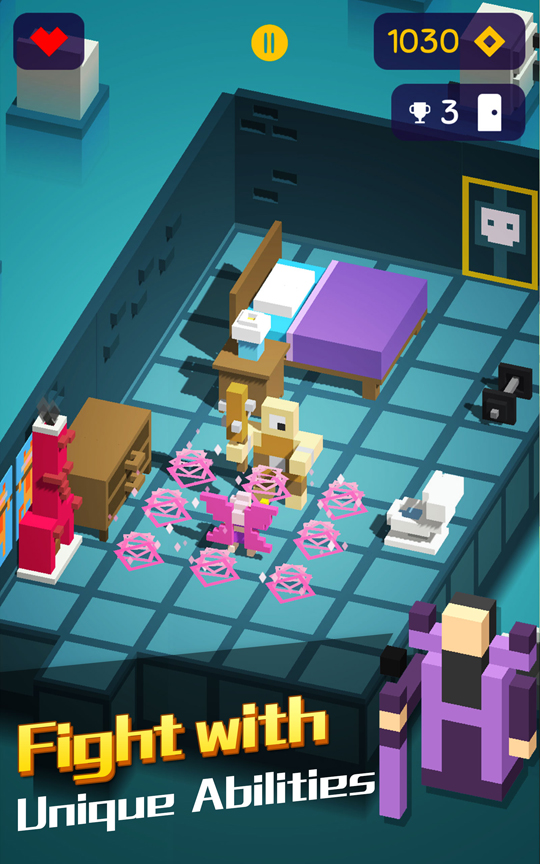 You take on the role of an adventurer in a dungeon. The primary goal is to get through the dungeon and get to the door at the opposite end of the board. Each level is fraught with traps, obstacles, bats and other enemies that are bent on destroying you at every move. What’s worse, or maybe just familiar, is the fact that you don’t have a lot of time to plot out your path. Like in Crossy Road and other games, the world is crumbling behind you, so you must hasten to that exit Good Sir or Madam! 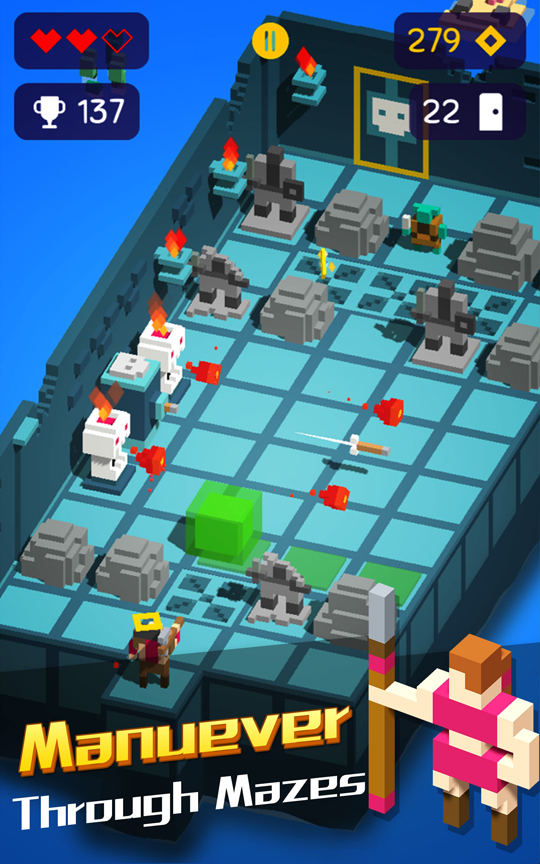 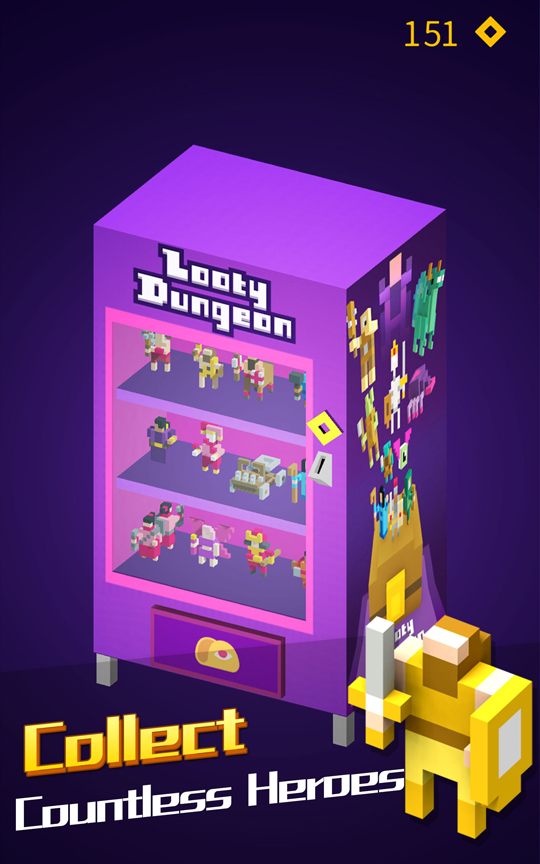 The game bursts with color, character and enjoyable game play. It is easy to pick and play this one. However, the game isn’t just about tapping to move forward. There are different quests or goals to complete as you play the game. Also, based on the character that you choose or unlock, they may have different weapons at their disposal, like a sword or a bow and arrow. You simply depress your character on screen for a moment to get them to fire their weapon. Keep in mind, you have to be turned in the right direction, or your firing shot goes nowhere. In some levels you will have to light torches and others you may have to hop on green squares. The idea here is that you complete the goals, and try to stay alive as long as you can. It is all about the length of the quest, and the game couldn’t be more fun.

“Looty Dungeon provides players with more than 40 different unlockable character classes, each with their own custom abilities such as firing arrows or magical spells. Players battle through increasingly difficult levels with deadly traps, ferocious enemies and mighty bosses, all via an intuitive one-tap control scheme.” – Yodo 1/Taco Illuminati

Good arcade games are hard to come by these days, and Looty Dungeon is a fun arcade game. The game is free to play in the best possible ways. If you have played Crossy Road or Rodeo Stampede, you know you can enjoy playing those games without spending a dime. There are ads in the game. As long as you keep collecting coins, you can use them to unlock other characters. The different characters cost 500 coins. As in other games, you can open a chest periodically, that gives you quite a few coins, so you don’t feel pressured to buy the coin doubler, which costs $2.49.

As you can probably tell by now, there is plenty to enjoy with Looty Dungeon. It is a straightforward game that is a lot of fun to play. From the excellent art direction to the sound effects of whinnying from an ax wielding centaur, this game has it all. If you are up for plenty of fun and a bit of challenge, don’t hesitate to download Looty Dungeon.  You will be glad that you did.