I won’t spend too much time explaining more about the game, as again, it’s quite famous within gaming circles, though here is what they’ve done with this one, that’s different from the first two. The story of the Pre-Sequel centers around Handsome Jack’s rise to power and villainy. The story itself was entertaining and funny, and starts out in a way that’s almost difficult to believe (though other characters within the game are equally as suspicious, so that’s deliberate on the writers’ part). The types of characters are very much different from what the others had; there are no sirens within the game, as one example, and a CL4P-TP is now a playable character. 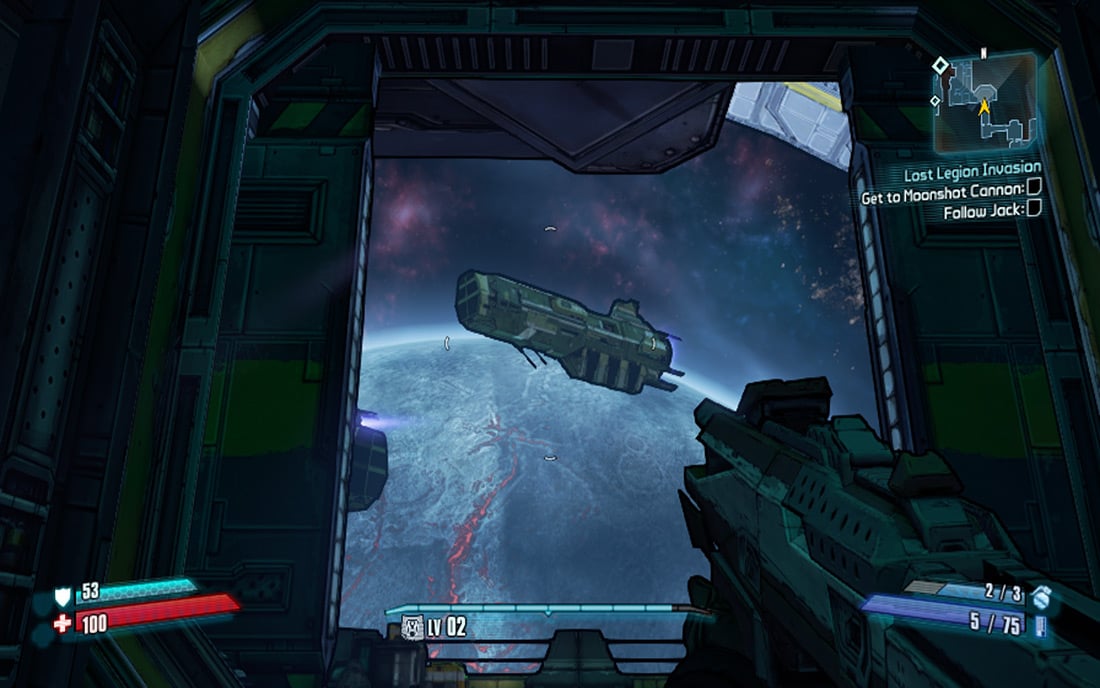 In Borderlands 2, Eridium was introduced as a new “element”, beyond the classic ones. In the Pre-Sequel, Eridium has been replaced with Cryo, which could freeze an enemy in place, while still doing the requisite damage. While I was a big fan of the second game, I wasn’t much of a fan of using Eridium as a game mechanic. On the other hand, I found that Cryo seemed to fit right in, in a way that Eridium didn’t. They also added a new class of weapons, which are lasers. They come in all shapes and sizes, mimicking assault rifles, shotguns, and so on, while also having models that are unique to that weapon type. And while having a broad amount of physical styles of lasers, they are all under the same umbrella, so to speak. For my play style and character build, I used them almost exclusively. Like Borderlands 2, there’s a secondary/black market currency that’s called “Lune Stones”, that both expand things like how many items or grenades can be carried, as well as helping fund a new mechanic called the Grinder, where players insert three items and/or weapons into it, to get something else out of it. So, adding a grenade, a pistol, and something else might net the player a shotgun.

Three like items are supposed to net an upgraded version of the same; throw in three like items of the same rarity, the game gives you the like item at a higher level. I didn’t spend much time on this though, as crafting/chance mechanics like this just aren’t my bag. The game is largely set on the moon surrounding Hyperion, so when outdoors, there’s low gravity, and the need for O2 tanks, which becomes another class of loot, with their own features, much like how shields work with additional features and bonuses, beyond strait up damage soak. The O2 tanks not only give your character something to breathe within the near vacuum of the moon, but they can also enhance jumping, but at the cost of using O2 faster since the compressed air works like an afterburner, and the canisters refilled automatically when indoors, at O2 machines, and at gas leaks (that stream o2 out into the vacuum of the moon). In a thoughtful twist, incendiary weapons will still fire when outdoors, but lose the subsequent burn, as fire requires air. These are the majority of changes within the franchise for this particular game, that I noticed. On the whole, I found all of them fitting and hope to see them retrained, or revisited in later games. 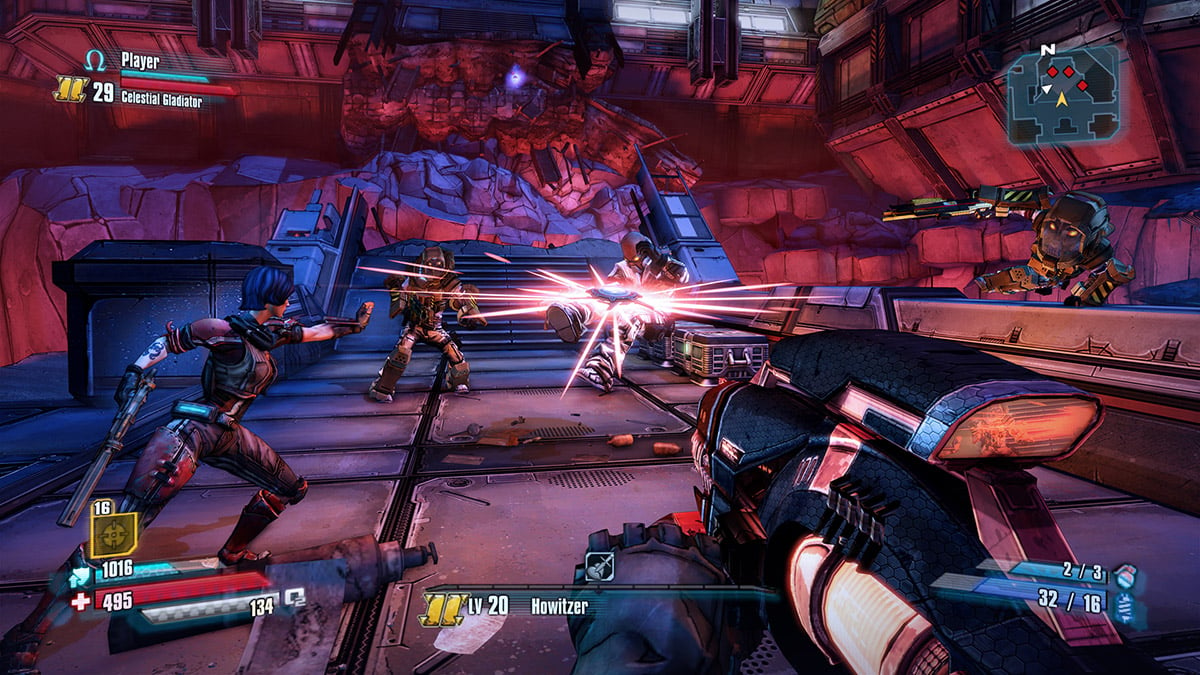 I played the game on my stock, Nvidia Shield tablet (LTE variant, running 6.0.1). The game is exclusive to Nvidia’s hardware, and requires a controller, so don’t bother getting the game if you lack one. And as thoroughly as I enjoyed the Borderlands experience, it didn’t run NEARLY as smoothly on the tablet as it should’ve. I had frequent problems with Google Play Games signing in, as it would take minutes at a time, and I couldn’t play the game until that was completed (unless I wanted to forgo the GPG achievements and cloud saving). As for the cloud saving, in my experience it was far from reliable. When I completed the game, my character was level 48. I cleared the game’s data, so it would remove my GPG log in, saved progress, and so on. I then waded through several attempts to log in to GPG within the game, only to find that the character that was saved in the cloud was level 20, and would’ve costed me hours of time to recoup the experience, weapons, progress, and so on. Should you choose to rely on the cloud saving, do so with the caveat that you may likely lose hours worth of gaming.

Also, there were points in the game where it stuttered, and the controller dropped its connection to the tablet, or the game would be running and simply couldn’t control my character for minutes at a time. There was a time or two where this last issue happened while my character was moving, only to have me end up watching my character go off the edge of a cliff and fall to its demise, as my controller was unresponsive. At other points, my character died since I couldn’t return fire, thus making my character a sitting duck. Oddly enough, I noticed an appreciable drop in the frequency that this happened, the farther into the game I got. For whatever its worth, I still have NO idea why this behavior occurred at all, what might have triggered it, and why it tapered down as I got closer to the end of the game. 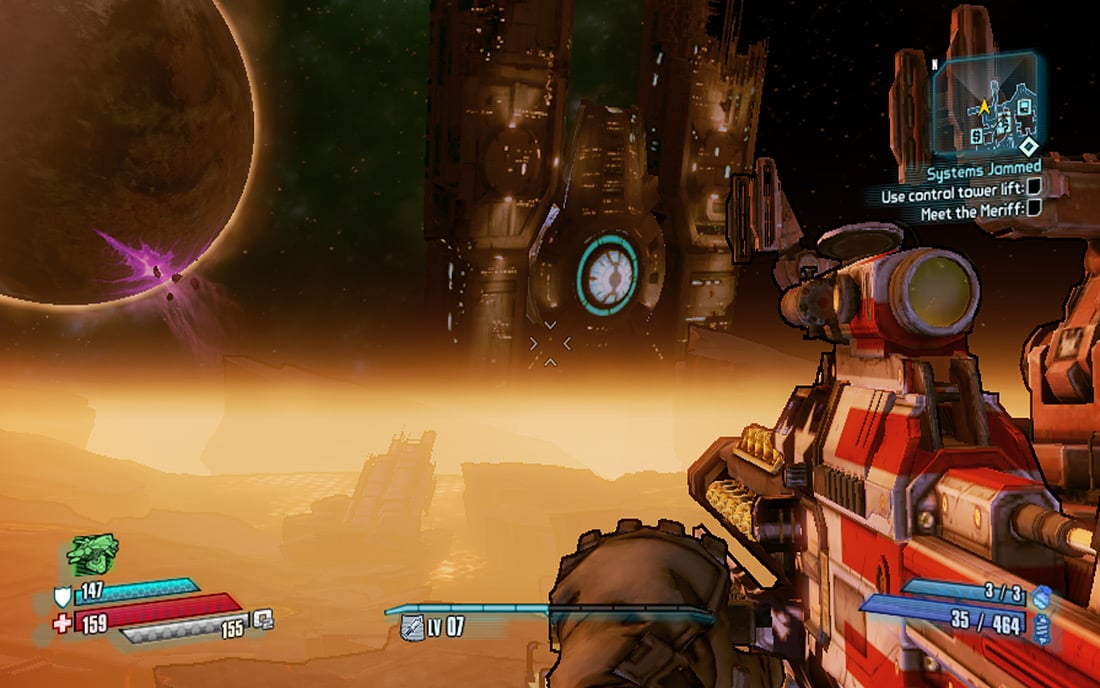 In my efforts to address this (and the stuttering) early on, I took every option available to me, including scaling the options within the graphics settings all the way, and even going into the tablet’s settings and maxing out the performance within the tablet for just this game. I’m not sure how much this helped though, and I have the suspicion that it’s a combination of dated hardware, and the game being poorly ported; this same tablet of mine ran Strike Suit Zero a year back, which runs on modern PC and gaming consoles and was nearly flawless in doing so, yet struggles with the Pre-Sequel which my PS3 can run without issue. If 2K can get this game to run on that, it should be able to get it to run on my tablet which has appreciably better guts.

In the end, this game is great, if you already like the way Borderlands does things in terms of humor, cell shading, drops/loot, the depth (my play through was near fifty hours) and so on. Sadly, this recommendation is qualified, in that while you SHOULD play this game, it should definitely be on other hardware. Perhaps Nvidia’s TV unit, with more RAM and a newer/beefier SoC can handle this (and I suspect that would be the case), but I’d avoid it on the tablet, if you can.