In a double-header of Pokemon GO news, it appears that Niantic Labs has teamed up with Sprint for… something. What this may actually end up being remains to be seen, but we won’t have to wait long to find out what’s going on with the two companies, as they are planning to hold a join press conference tomorrow.

What could this announcement be? No idea what would require a carrier to be a part of an announcement for Pokemon GO. Maybe unlimited data for players, similar to music which T-Mobile did recently? Who knows but it must be pretty big considering Sprint’s Chief Executive, Marcelo Claure, and Niantic’s Chief Executive, John Hanke, will both be at the news conference. The event will begin at 8:30am PST so you don’t have long to wait. 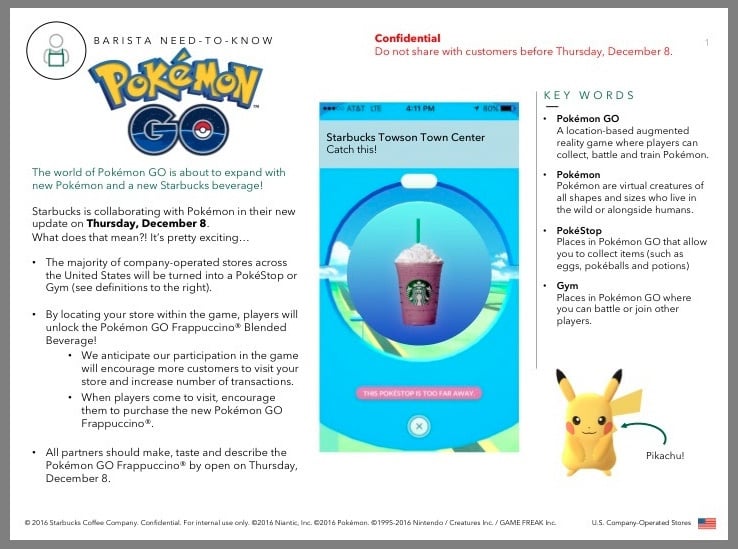 In other Pokemon GO news today, a Starbuck staff notice has leaked out which basically outs the date when the 2nd generation of Pokemon will be arriving in the game. We do know that it is coming at some point, thanks to the datamining that happened last month. So the surprise isn’t that the 100 new 2nd gen Pokemon (Gold and Silver) are arriving, but that according to the staff notice, it will be arriving on December 8th, 2016, which is this Thursday.

The same dataminers also found Ditto, which did make his appearance just a couple of weeks after its discovery in the games code. So there’s no reason to not believe this leaked staff notice as being true. Apparently it has been confirmed by actual Starbucks employees as well. Whether this is actually true or not remains to be seen, but we will find out on December 8th if the update show up or not.