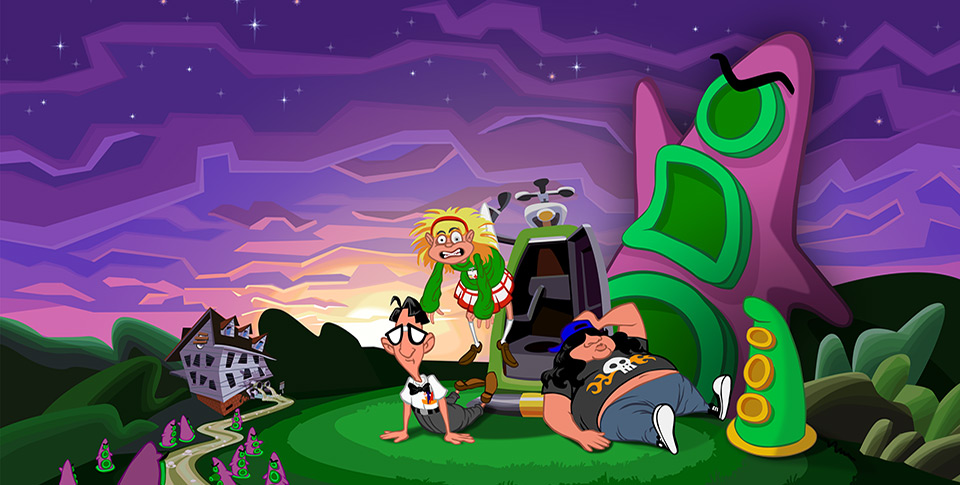 Players will assume the role of three unlikely heroes, all of them being quite stereotypical. Bernard is the geek, Hoagie is a hard rock/metal roadie, and Laverne is a flaky medical student. Dr Fred is a mad scientist that is polluting the river behind his house. Two of his creations (brightly colored tentacles that not only stand upright, but talk and ambulate) wander back there, with the purple one consuming some of the contaminated water which leads to heightened intelligence, the growth of arms, and the desire to rule the world. The three heroes attempt to stop this conquest, and two of them get flung two centuries away by means of Dr Fred’s hinky time machine, causing the roadie to land that far into the past, and the flake landing just as far into the future, while remaining at the same geographical location. 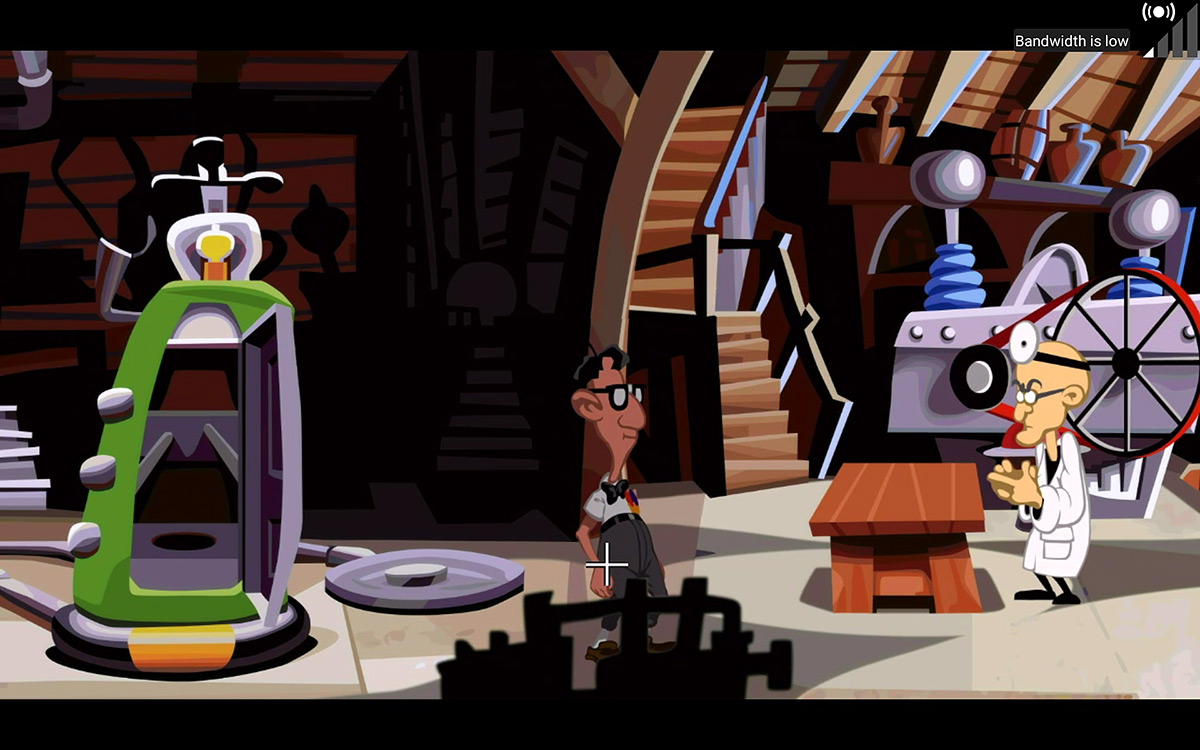 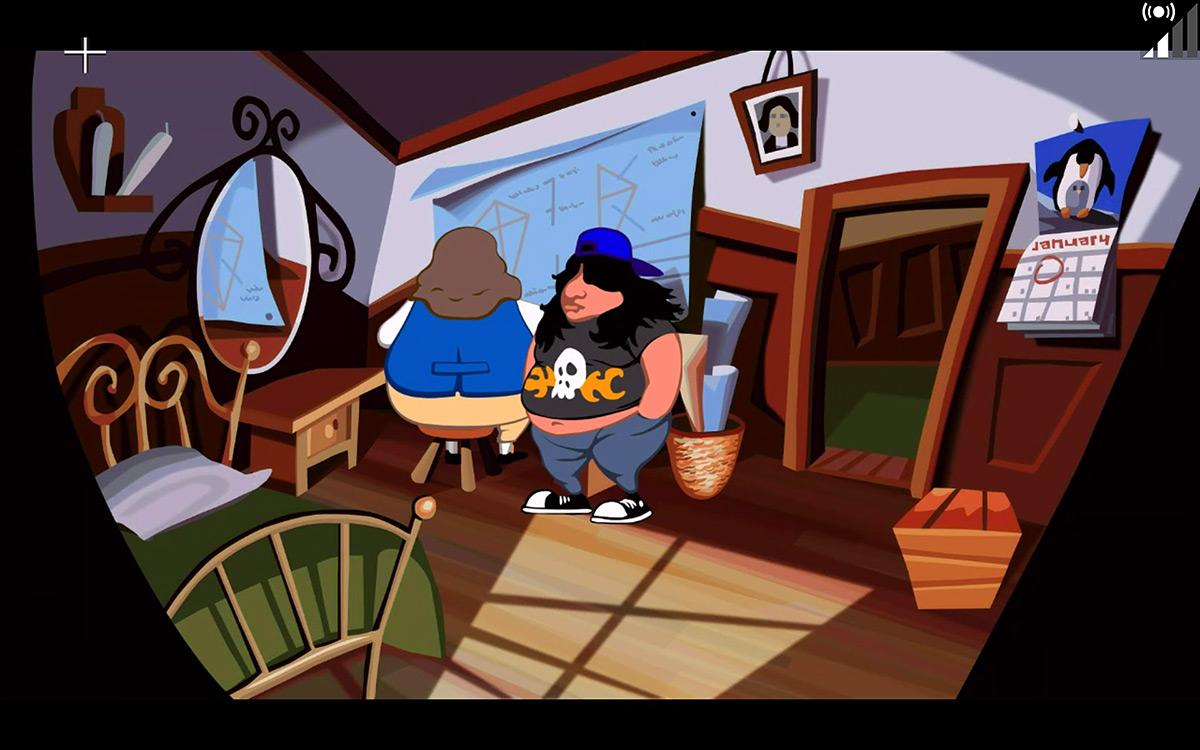 This causes all three characters to work their way through the same location in vastly different time periods. They must fix their respective time machines to return to the present, to then save the world. I found the scripting and story thoroughly enjoyable. As one who didn’t find history class in High School to be dry and boring, I found Hoagie’s interactions with the framers of the constitution to be especially entertaining, as well as how they are caricatured. So as far as the story and dialog go, it was very enjoyable.

The controls of the game are either really straightforward, or convoluted beyond belief, depending on whether or not you choose to play with a controller. The game can be navigated by touch, but it was a sub par experience. I found using touch to be difficult at best, since players need to manipulate a mouse cursor, as opposed to the concept of touch as one might expect. Doing it this way, most interactions were triggered by long press, or calling up a virtual keyboard that sat over the screen in translucent gray. There were no tutorials (that I recall) going over which keys trigger which actions, for whatever that’s worth. Using the gamepad was quite the contrast. I was able to use the cross pad to jump the cursor from character to the next, and didn’t need to open up the item menu. In the original release, that was the only way to switch characters. 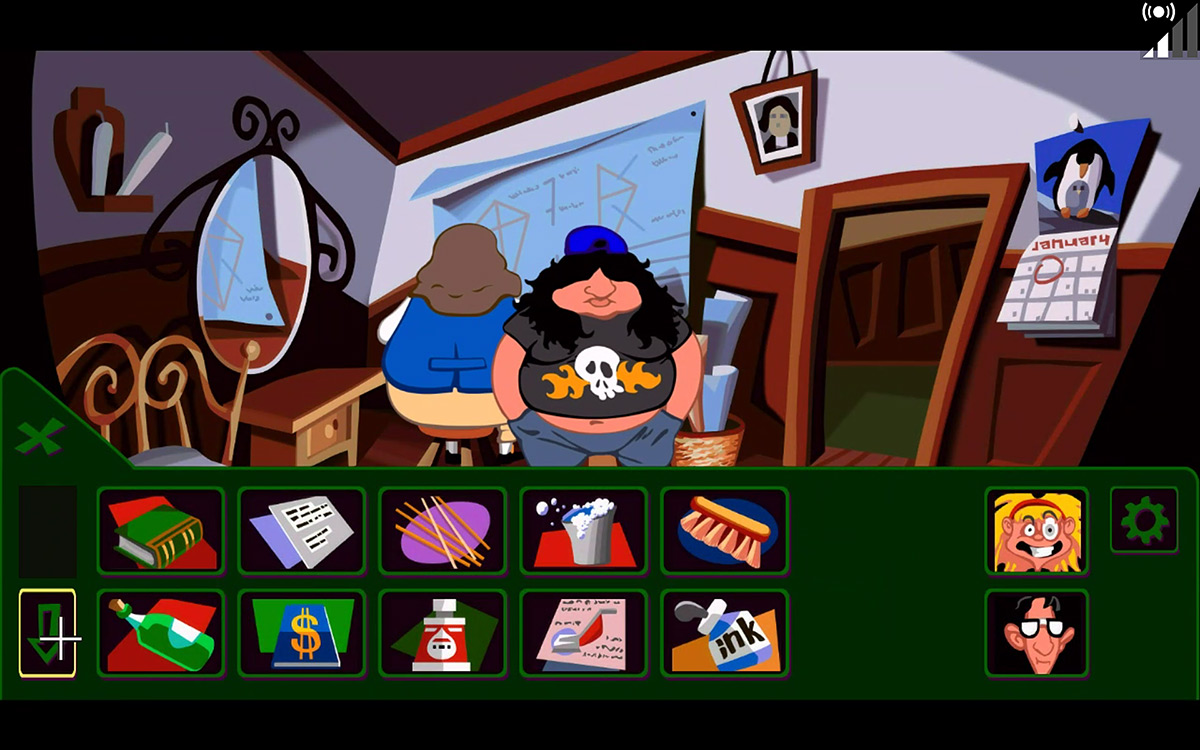 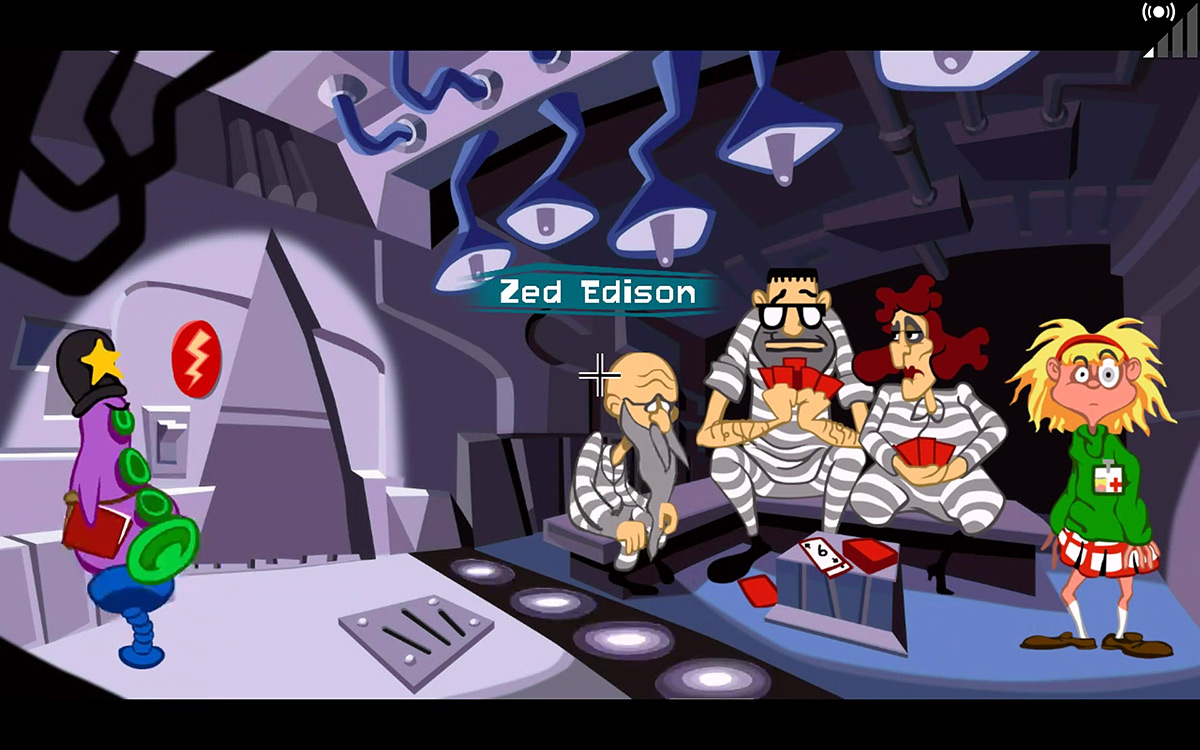 The dual-sticks controlled the cursor, with the left stick moving the cursor freely while the one on the right would cause the cursor to immediately jump from one object of interaction to the next; this latter part was great in offsetting the fact that the speed of the cursor was a touch slow for my preferences. The buttons operated a handful of functions: selecting where to have my character walk, opening the item menu, as well as the interaction menu for objects/NPCs. This last one gave players the option to give/offer, push, pull,examine, talk to, and use. Most of the items were used once, but a handful were used multiple times. Most of the game’s puzzles relied on identifying objects, and using them at a later time (no pun intended). As often as not, an item found in one time period were needed in another. Dr Fred’s time machines were re-purposed port-a-pottys, so characters “flushed” items to each other, to arrive in the past, present, or future.

Unlike my experience with Grim Fandango, I found most of the puzzles in this game to largely make sense. That doesn’t mean that they’re all obvious and easy, so much as that looking back at them, I don’t recall any one puzzle turning out to be a legitimate stretch beyond what the game strives to accomplish. The graphics and soundtrack for the game were solid. With the former, players have the choice of the original, pixelated images (which did NOT age well, when playing it on a modern TV), or an equally cartoony but very much cleaned up HD version, which was my preference. I found this change to be beyond welcome, as everything was simply more clear, and easier to see. The sound track was excellent, and apparently it was given the same treatment as the visuals. All the way around, the sight and sound portions of this game were great. 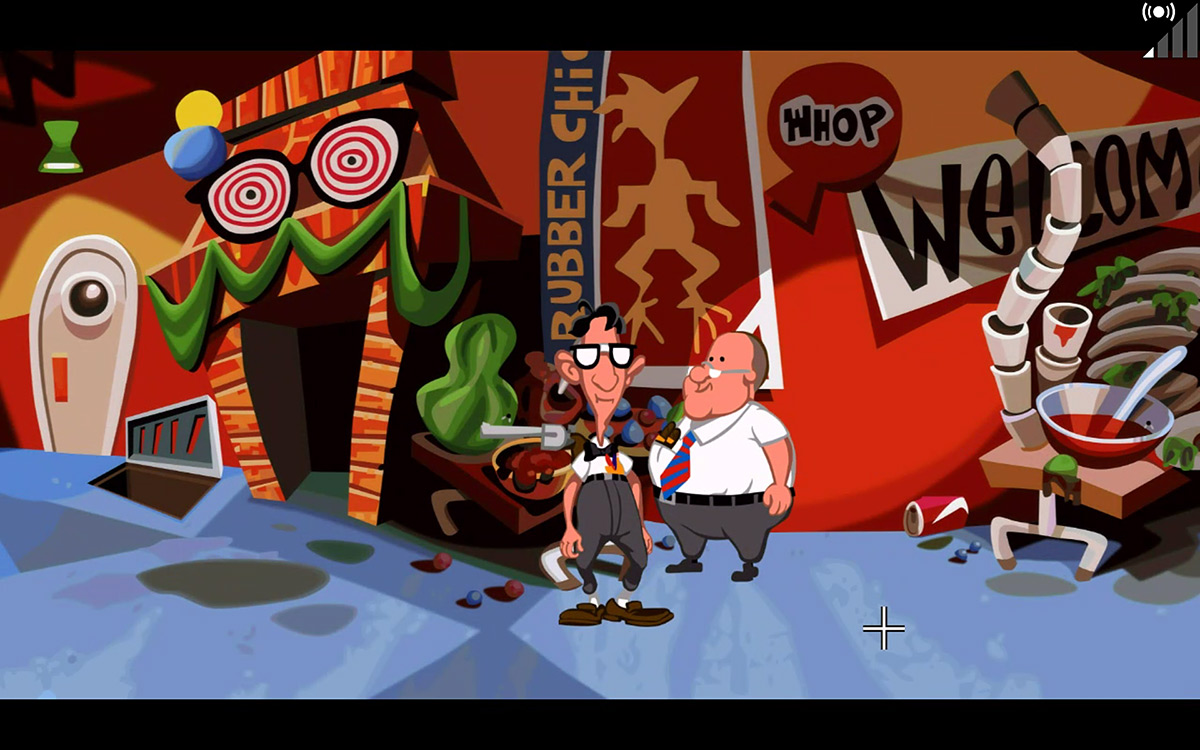 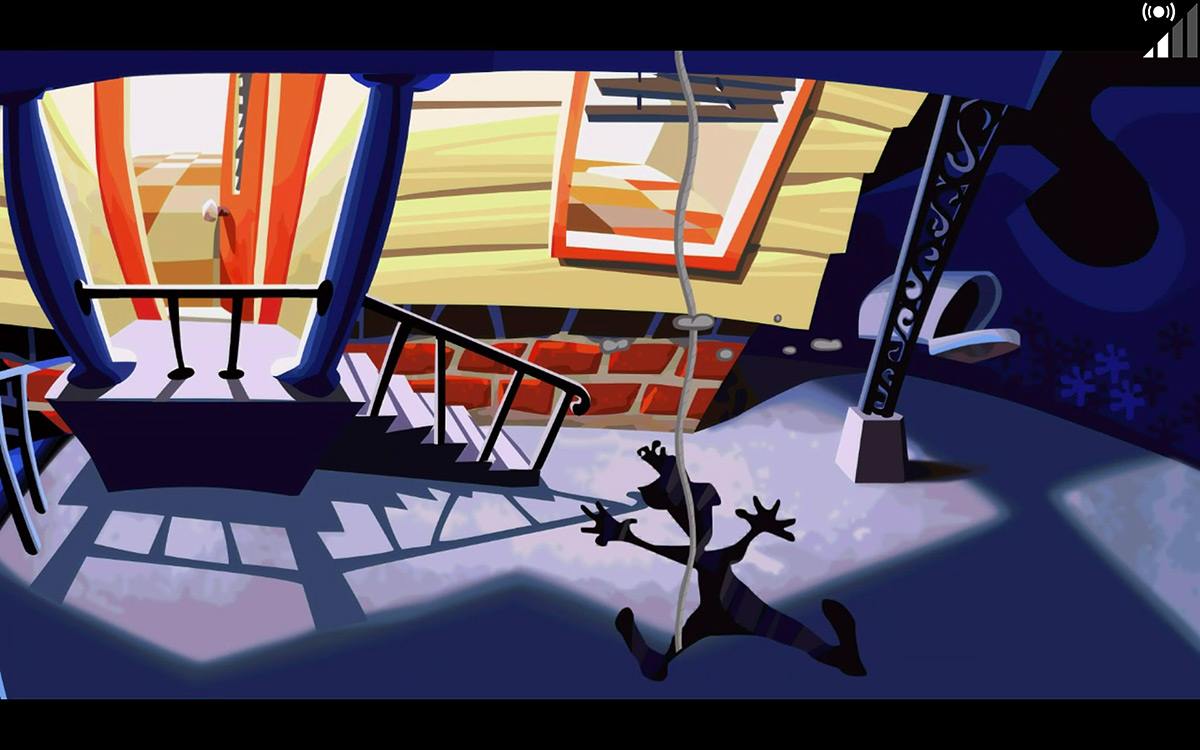 Lastly, as stated at the outset, I played this game through the service GeForce Now. Unfortunately, it’s the ONLY way to enjoy this classic on the Android platform, though I hope that someday it’ll be available natively. There were advantages to using this service though. For example, I could enjoy the game at home on the Shield TV unit, and while out on the Shield Tablet. Given that the game is only streamed, it forces players to use cloud saving on Nvidia’s servers. This also worked without a hitch, every time. So, if you’re looking to enjoy a really good point and click with quirky humor, you’ll definitely want to check this one out. And don’t let its exclusivity to GeForce Now stop you, as purchase of the game also includes a code for redemption on GoG.com, so you own and can play the game no matter what happens down the road.

Nvidia GeForce: Day of the Tentacle