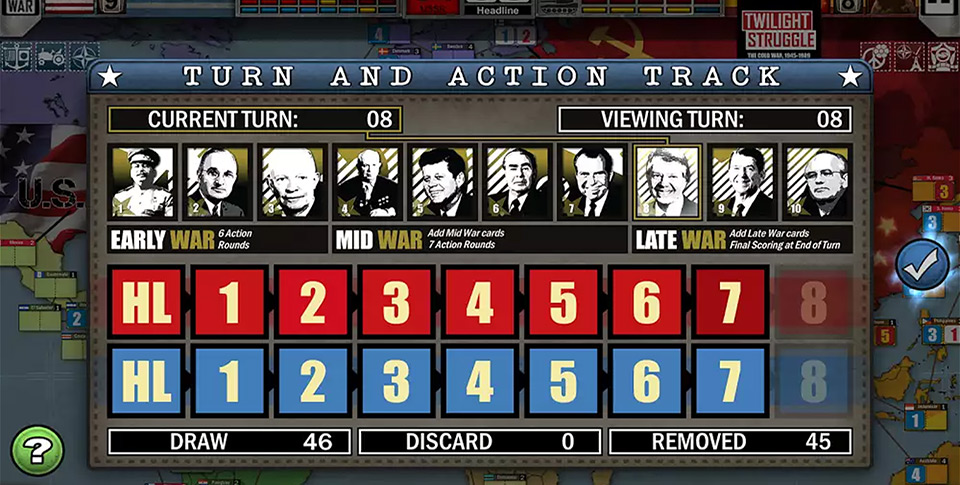 Twilight Struggle is one of the best board games ever to be created. Fortunately for us, it’s now been ported over to Android. In this game, players will be assuming control of either the US, or the Soviet Union, in a bid for global hegemony, during the Cold War. Players will work their way through rounds, that are focused on each of the four main decades that contained the Cold War.

Play begins in 1945, and players for each side will have armies based in countries that were within each side’s respective sphere of influence. From that starting point, players will look to bring as many nations as possible into their orbits, before the end of the Cold War in ’89. The game is played primarily through resolving the cards in their hand (for better or worse) which are  based on actual historical events such as the Cuban Missile Crisis, the Vietnam War, and other salient, historical events.

Players have tools at their disposal to try and flip the allegiance of these nations, ranging from open invasion, to something more subtle like a coup. In another wrinkle, certain actions will ratchet up international tension, which is measured by the DefCon status at that moment. The game is lost if a player triggers all out nuclear war, so what ends up happening is that a balancing act must be maintained. You may want the bonus for flipping the last nation on a continent into your orbit, but doing so could escalate the tension and cause the game to be lost; or, you may want to go light on a nation that almost always flips against you, part way through the game, knowing that it will likely happen one way or the other. 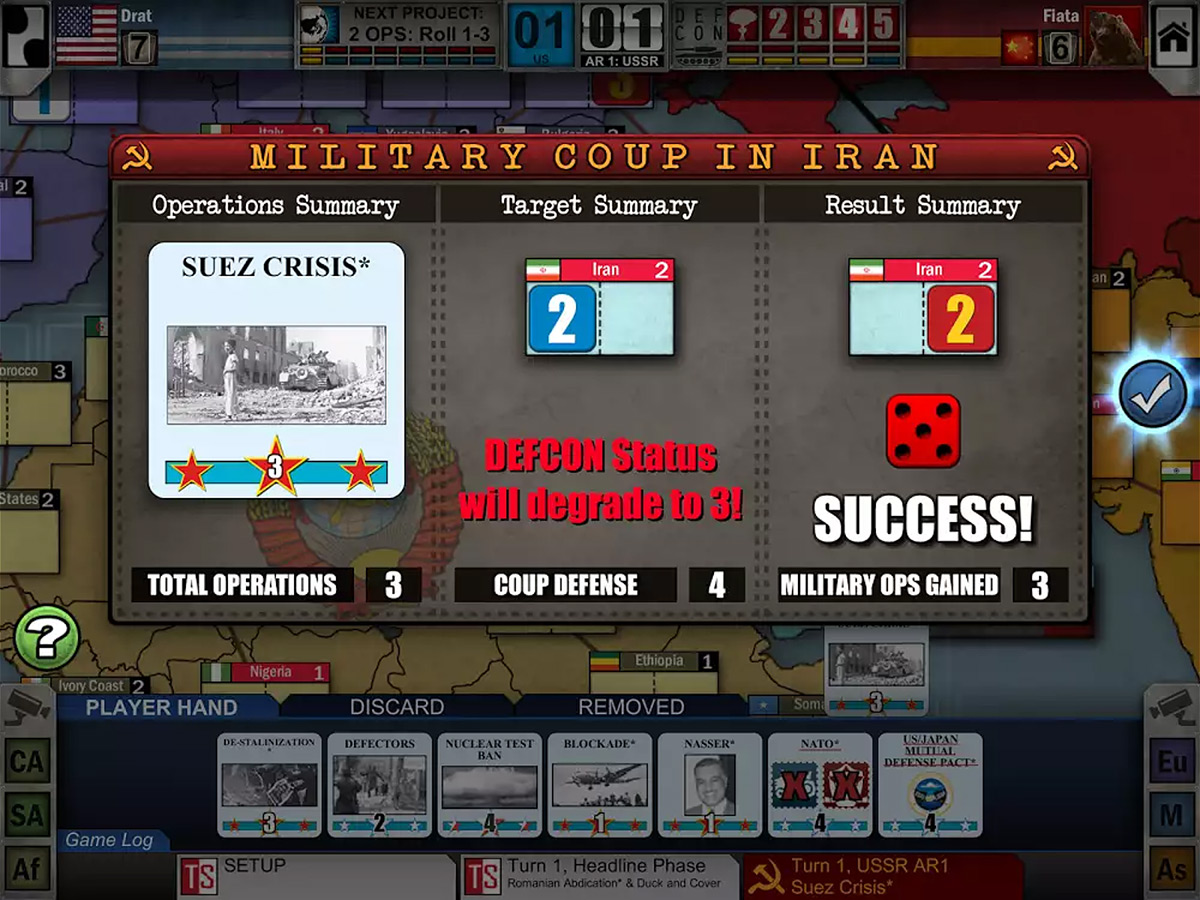 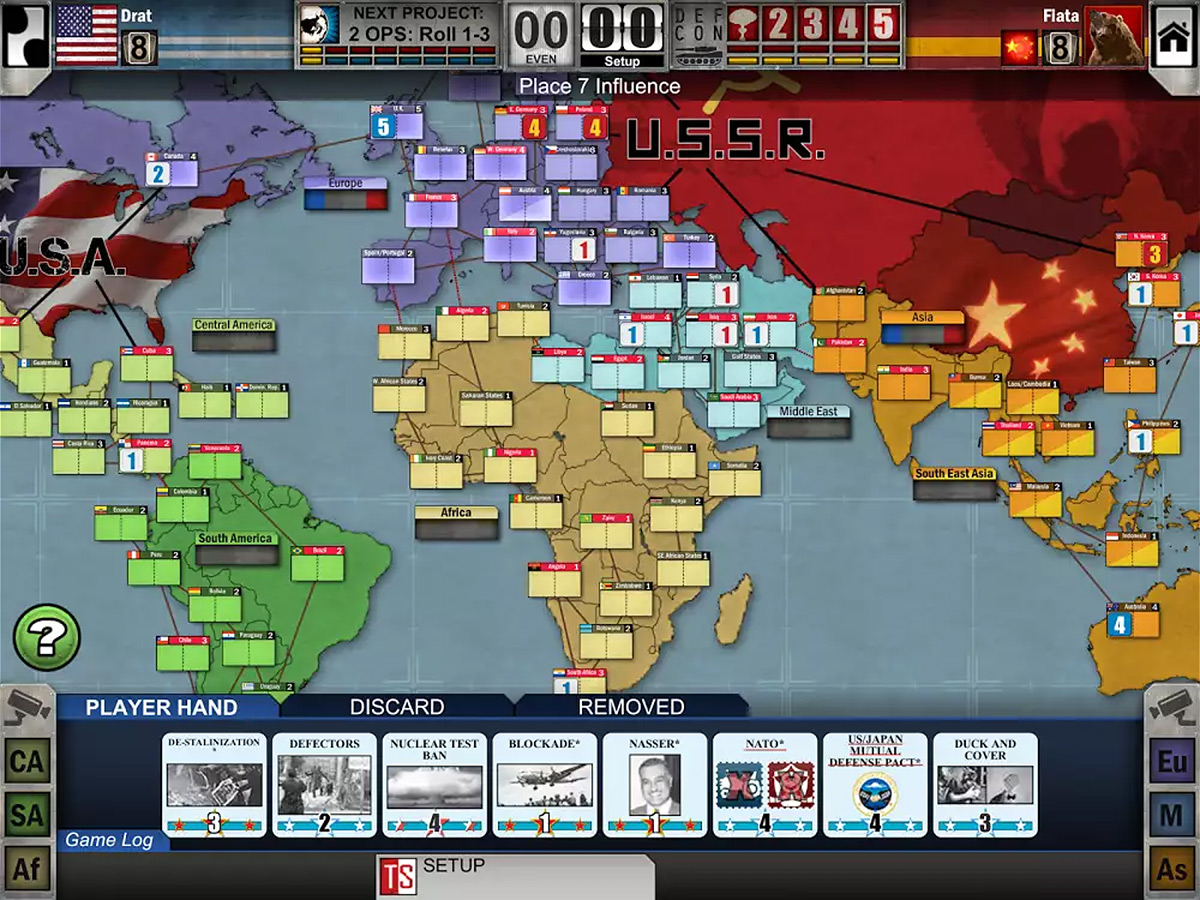 The game works it way through all four decades, with scores being added up at the end to determine the winner (provided it gets that far).  The game is designed for two players, and this port includes multiple way to enjoy it. Players can tackle the AI, pass and play locally, or play online; all forms are asynchronous, and online requires both the (obvious) internet connection and an account with Playdek.

Twilight Struggle is currently available from Google Play, for $4.99. The game includes a single IAP for an additional $3.99 which covers the board game’s expansion Turn Zero. Turn Zero covers alternate starting positions for each side, and more or less gives some wiggle room to history. The starting price is apparently introductory, and will double at some point in the future.