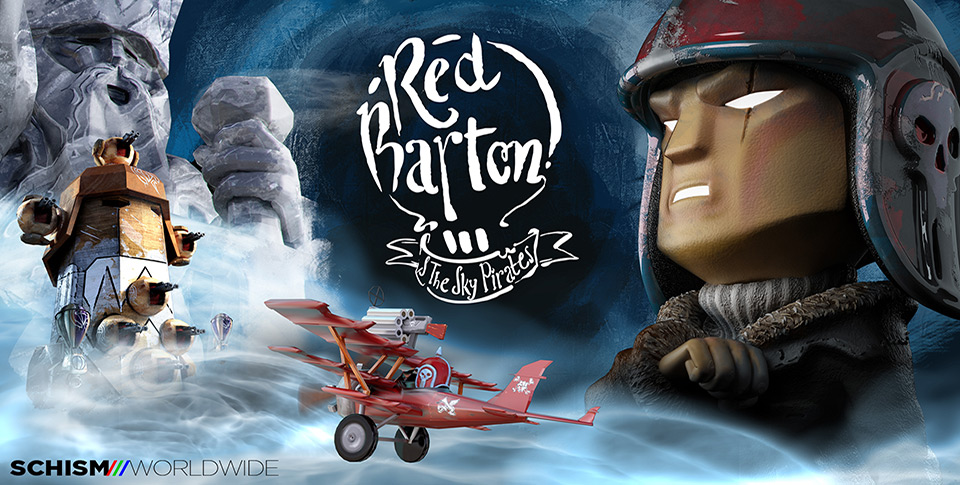 1. You are taking on an outstanding task in this modern era of releasing your game on Steam, iOS, and Android.  Did that make your jobs as developers more difficult?  How?

Yes and no. Red Barton and the Sky Pirates was designed for a PC arcade gaming experience, but early tests with mobile devices have shown that it translates very well into mobile platform. The deceptive simplicity of the game mechanics and the challenge factor curve pull players into the game on any platform. This is where choice of Unity as our development environment really made all the difference as it allows for a streamlined way of targeting multiple platforms. It’s not easy, so it’s also very important to have a little bit of an adventurous development team that is willing to tackle the inevitable hassle of various platform issues – but it’s worth the effort as you can bring your title to a much bigger audience. 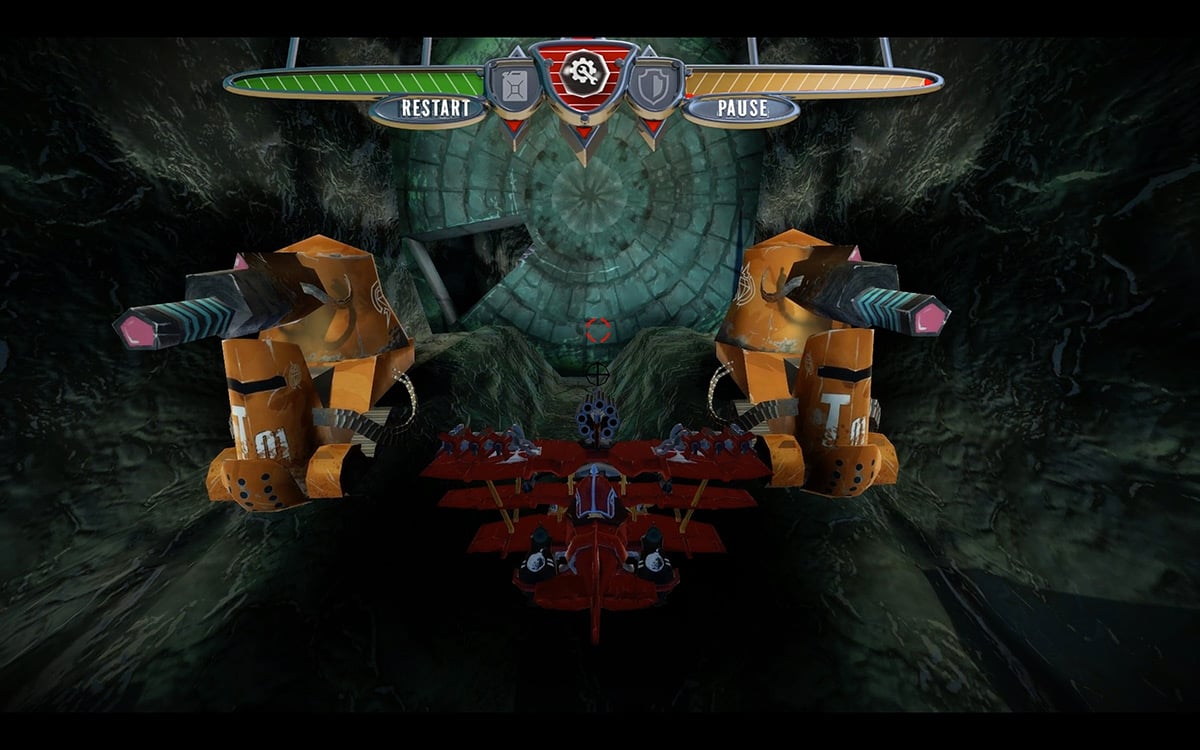 2.  Your game has a truly unique and dare i say beautiful graphic style.  Its like Steampunk, mixed with cell shading and hand drawn graphics.  What made you utilize this style for your game?

Schism as a company always looks for outstanding, unique talent to work with. We certainly found that in this collaboration with Kosta Zdravković, a Canada-based game designer and digital artist. He has a unique cartoon quality of illustration and a capability of visualization of anything one can think of into a digital asset. Red Barton was on his mind longer than the development of this game, and many of the assets were therefore built very quickly as they existed as a sketch somewhere. Staying within this style from the get-go was integral to the game design process. We were very mindful of it when designing all aspects of the game.

3.  This game reminds me of After-Burner and The first Star Fox game or any third person, behind the vehicle view type of game, even Outrun.  Were you drawn to this style from your days as a youth?  I for one can say i missed this style of game, and if done right, can become an instant classic.

You’re just pressing all the buttons over there. These titles quite literally formed our taste in games, to call us fans is an understatement. I have no idea just how much money I personally dropped on After Burner and Outrun. The greatness of Star Fox later was it’s role playing idea, that story line you followed and though we touch on it in Red Barton, it’s combination of the action segments of After Burner game play with a story line shifting it into a world of our own that was the most rewarding part of the process. It’s a good moment to refresh app stores with a premium title or two in this genre. 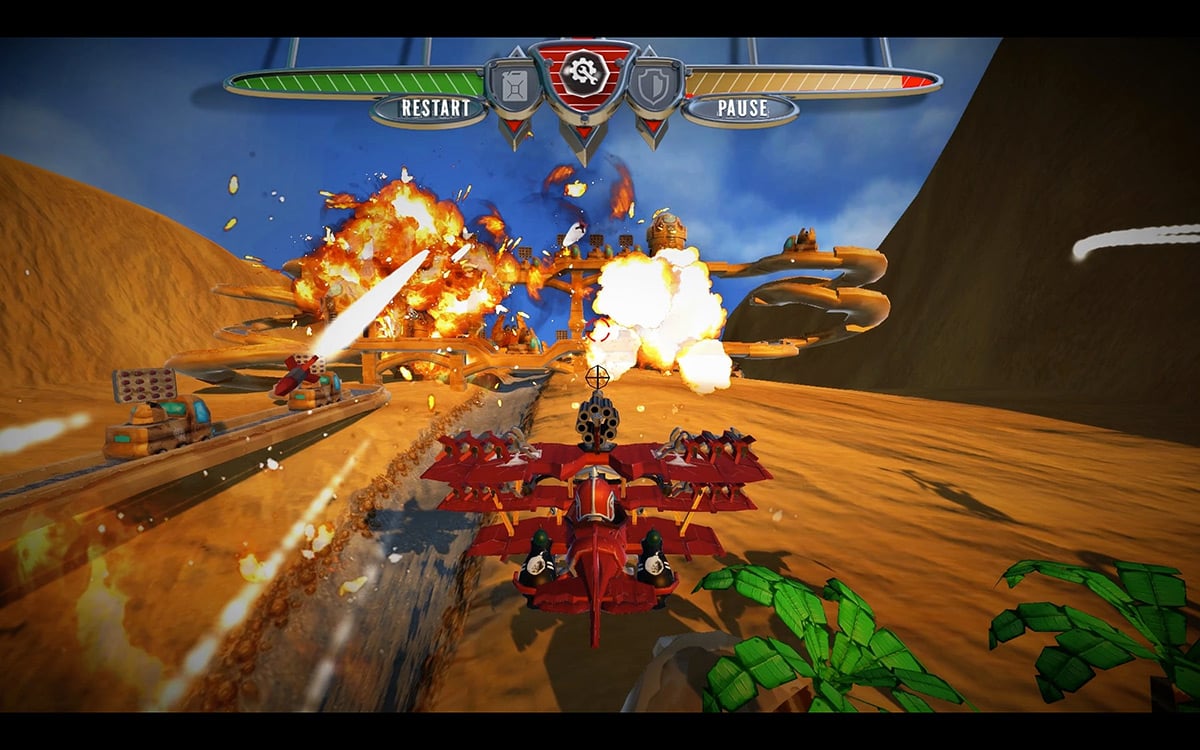 4.  Will this game feature any type of cloud saving or cloud support, where i can start play on my Android phone, and resume play when i get home on Steam?  If so, who needs a Nintendo Switch?

We are really going for a full throwback to simpler times in arcade gaming. One aspect of that were those three-letter high-scores to beat, so we are currently developing a platform specific global score-board for Red Barton. The first release of the game offers a unique experience on each platform, but down the line we are researching many options similar to the one you mention. I really don’t want to spill all the beans for any possible DLC before the release. Let’s just say that the path is laid out for players to follow if they turn into fans of the game.

5.  Does your game utilize any form of learning AI which would allow enemies to adjust their difficulty, and or patterns on the fly?

We do have a few game modes, from easy to a “good luck” mode which is just… Well… You’ll see. Part of the difficulty variance is in the AI that adjusts to the player to an extent. Larger part is in a deceptively simple system that doesn’t allow you to memorize the locations of the enemies – making every run unique.

6.  Have you decided on pricing or price structure for your game?  Will it be free-to-play, IAP, only one purchase to unlock everything?

We are in the game market to create and play unique premium game experiences so Red Barton will follow that thought process. It will be one purchase of the game with everything you need to finish it, but there will be expansions, and in-game store with DLC you won’t need to own in order to finish the original game but will certainly help especially on higher difficulty settings.

I would like to take a moment to thank Aleksandar Djordjevic for taking time out of his busy schedule to make this interview possible.