The Pandemic board game is currently available for 70% off

In other board gaming news, Pandemic is currently on sale for a limited time. In this game, two to four players are doing everything they can to stop an outbreak of a pandemic disease from wiping out humanity. One of the many twists in this game is that there are multiple diseases that are all spreading concurrently, though in different regions of the globe. Players work cooperatively in this game, to try to kill off all four diseases and and hopefully avoid the multiple loss conditions that the game presents which include too man outbreaks, running out of player cards, and so on.

There are multiple character classes within this game, each with their own abilities, and with players being assigned one of the following at random: medic, scientist, ops expert, researcher, and dispatcher. Players begin the game at the CDC’s home in Atlanta, and spread out from there. In a given turn, players will have four different options on their turn:

1. Move their character by flying them to another city.
2. Treat part of the disease (in the board game, each disease is indicated by a colored cube, thus the treatment would remove one cube from the board. In the digital port, they appear to be simple squares, but should otherwise function the same).
3. Trade cards with another player.
4. Cure the disease, which can be tricky as it will only stop its spread, but won’t instantly remove all of that disease from the board, as that falls under treating. 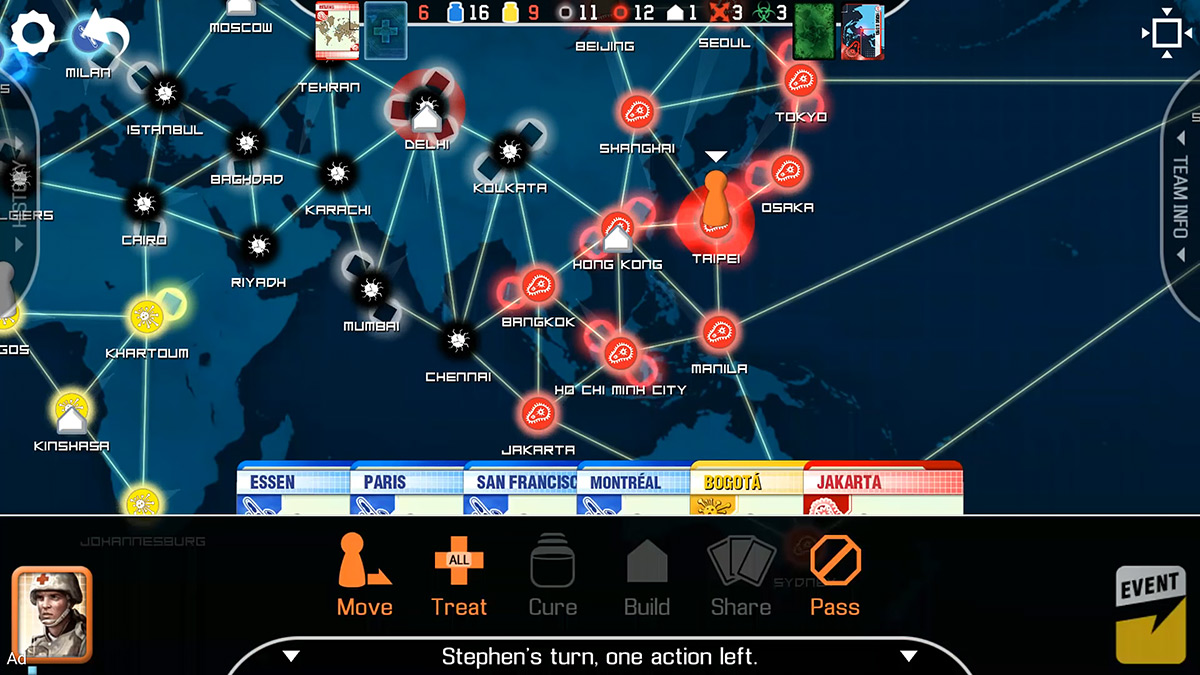 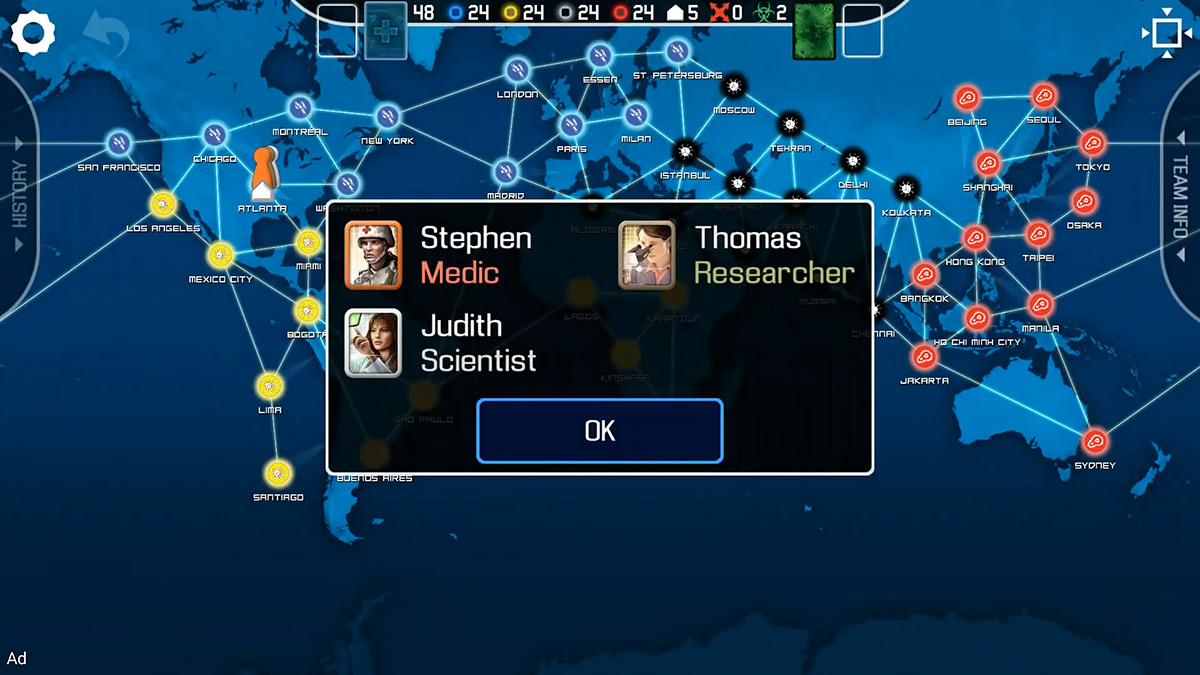 Should players manage to eradicate all four diseases before time runs out, the game is won collectively.  The game has three different difficulty settings that range that cater to beginners through people who love to lose experts. Players can play alone, but need to handle multiple characters. Otherwise, pass and play seems to be the only other option at this time.

– 7 role cards with unique abilities
– Supports games for 2, 3, or 4 players, but can be played solo if you play multiple roles
– Pass-and-play multiplayer (2-4)
– Three difficulty settings make the game suitable for beginners, intermediate players, and experts
– Fully guided interactive tutorial; plus “Info Mode” for in-game reminders of the rules
– Full rulebook included for easy access and detailed reference at all times
– Animated interface gives clear indication of the game’s progress and hotspots
– “Undo” system
– Adaptive soundtrack
– Complete implementation of the board game suitable for expert play
– Interface designed and tested for ease-of-use

Pandemic: The Board Game is currently available from Google Play for $1.99 (which is 70% off). There are also an IAP for the same price that covers the expansion called Virulent Strain, that enables a fifth player, as well as additional virus cards with unique effects. 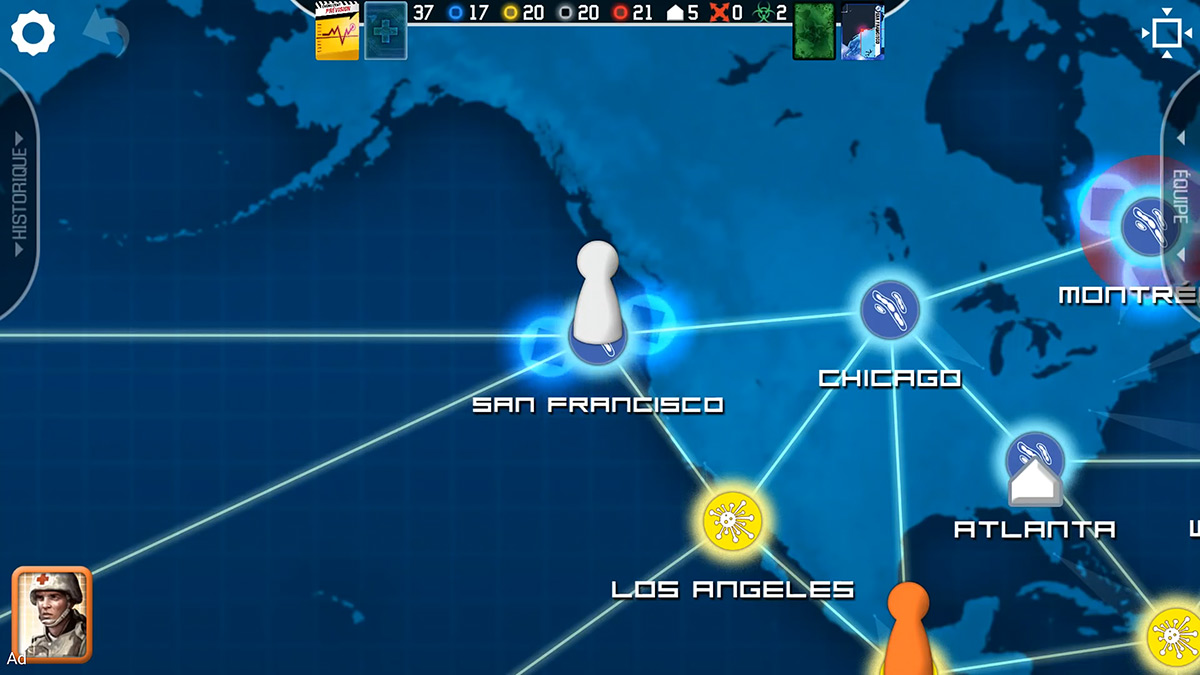 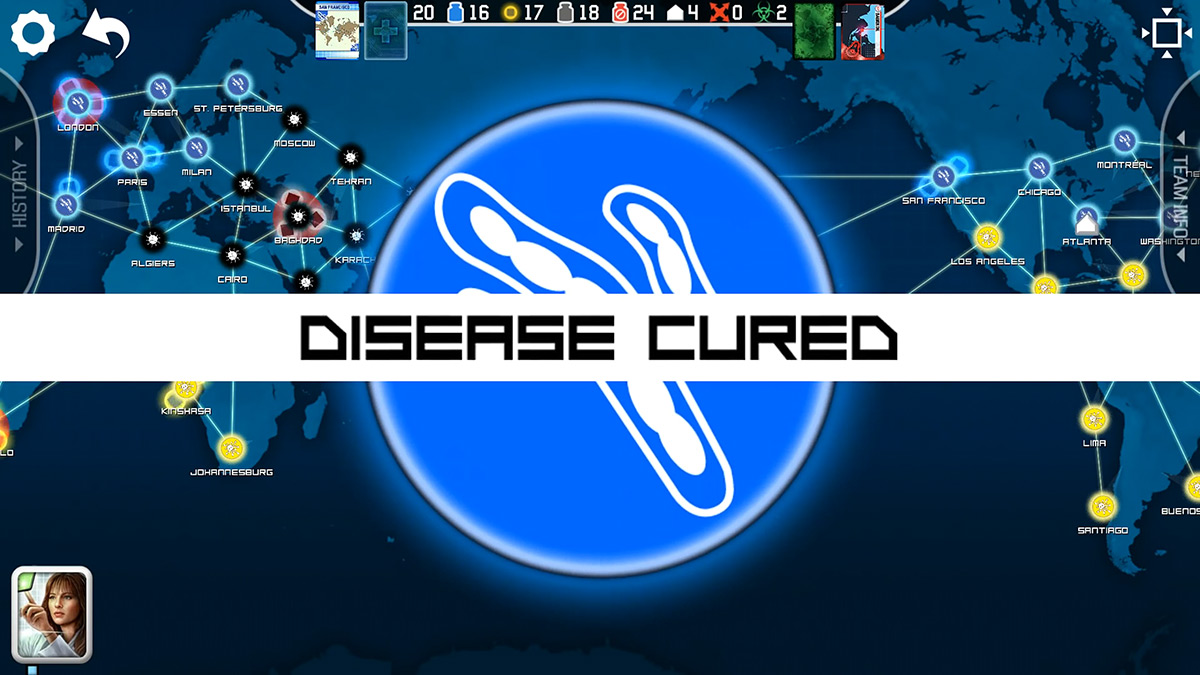