Richard Garfield’s Treasure Hunter is a drafting card game from Queen Digitals. Having played Magic the Gathering for 15+ years and enjoying drafting games, I ventured into Treasure Hunter with high expectations. Game-play consists of drafting cards for the purpose of winning either the maximum or min treasure for each of the three areas or to attack the goblins at the end of each round. After 5 rounds of play, scores are tallied and the game ends. I had a few problems with game-play.

I found choosing cards a bit difficult because they were stacked so closely together. I found myself spending several moments trying to select the cards I wanted. It is possible that playing on a tablet would help; however, I should I note that my phone’s screen is 5.7” and I have self-diagnosed fat fingers. The reader’s mileage may vary.

Though I’ve heard of the board game version of Treasure Hunter, this was my first time playing it, and I had trouble understanding some of the symbols on the cards. There wasn’t an explanation for a few of the treasures during the Tutorial and no pop-up descriptions are available. I had to go outside of the game and download the instruction manual, which is unacceptable. 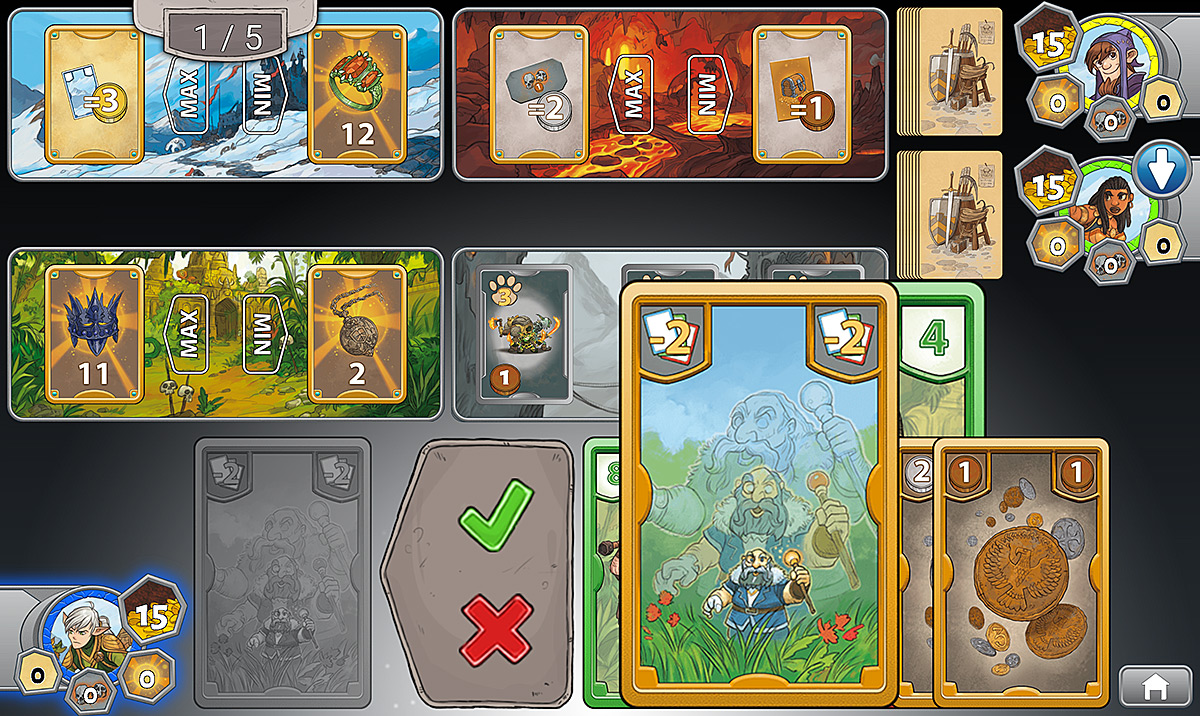 On a more positive note, each game of Treasure Hunter is different because the treasures, card drafts, and goblins are randomized each round. I also liked that the game can be played locally or online, so it’s perfect for gamers on the go.

The graphics were satisfactory. The cards, pieces, and area artwork are the same as the tabletop version. The comic art style is great and each hunter looks like they could have back story. Speaking of which, there is no story. The player’s sole task is to find treasures and score points. A little bit of story would help maintain interest and re-playability.

I was disappointed there isn’t any introductory or background music, and the special effects sounds were rather jarring at times. They were especially too loud at the end of each round. I’m sad to say, if you want a good introduction to Treasure Hunter, I would not recommend this version of the game. However, if you’re familiar with the game, the re-playability alone is worth the reasonable price.