Durango Preview: Four staff dive into the limited beta of this survival MMORPG

Durango is an upcoming MMO that’s in a limited beta, and they gave out only 25,000 keys for people to use. We got a few of them here, so what we’re posting is a small collection of our initial impressions of the game, after we spent some time with it. For the uninitiated, the game is themed around a world populated with dinosaurs and the people that are warped in to it, and are forced into somewhat starting over, by making clothing from leaves and tools from bone or stone.

Players begin by selecting a character that specializes in one of several areas (melee attack, defense, cooking, building, etc), and then begins a tutorial that covers movement, combat, and crafting. Of the latter, there’s a LOT of it. Players will be crafting weapons, tools, shelter, food, and more. I found the graphics of the game to be good looking, and the sound track appropriate.

The game has as abundance of menus and sub menus though, which can feel tedious at times, to drill down to their lower levels. Controls are touch based, and don’t look like they’ll translate controllers short of native support; navigating menus with a controller could become a huge headache, so I’m not holding my breath for Android TV. Aside from that though, what I played of the game was enjoyable, and I think it has the potential to really pan out. 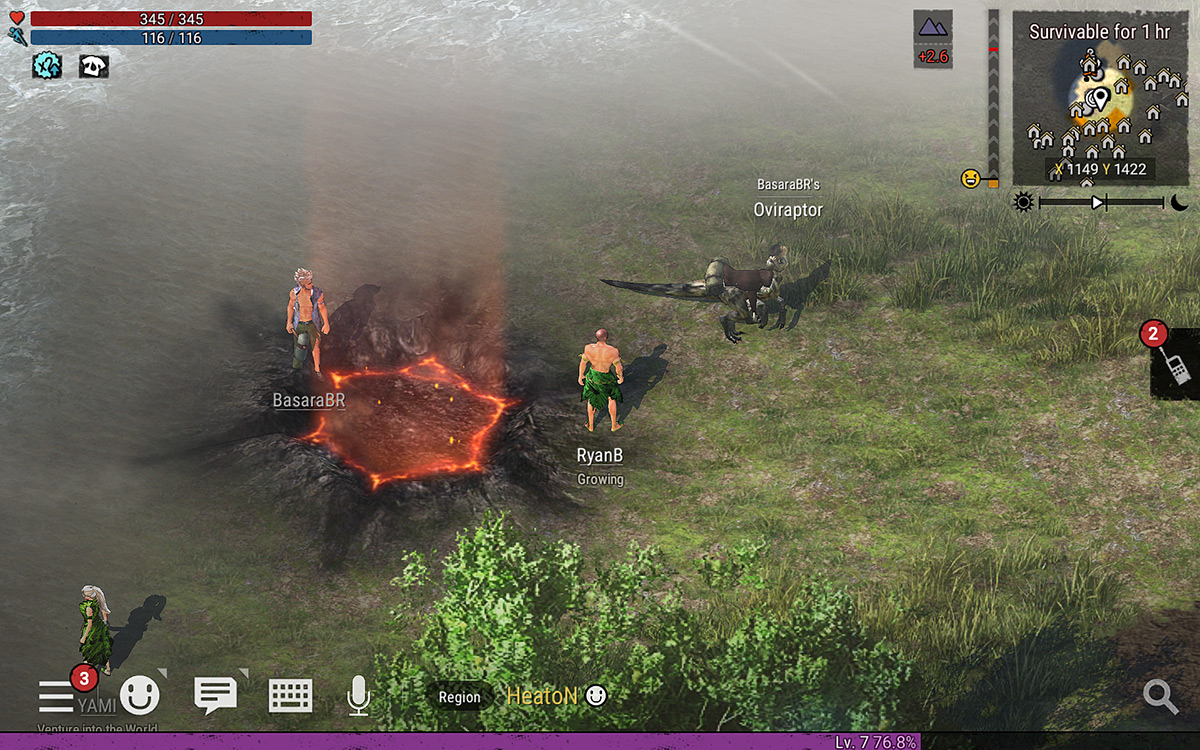 Great graphics for a three quarter isometric game. Very detailed. Lot of depth to the game. Tons of things to craft, lots of skills/specialization options. UI layout was nice and clean, hidden but easily accessible when needed. So many thing to gather for materials. I liked the fact that if you were gathering something that had multiples of something like 5 leafs from a tree, you could just keep clicking the leaf icon and it would queue up the remainder of said material instead of waiting to gather one at a time. Big time saver. But because there is so much to gather, it could be daunting on what to get and what to leave. I found that after i got to the main island where u make your home base, I felt a little lost on where to go and what to do. It’s your traditional survival type game from there on, unless i missed something. I thought it would be more like a MMORPG with quests. For a beta, there were a lot of people running around.

‘m not much of a survivalist player. I took one look at Minecraft and said “Nope!” I played This War of Mine for about 30 minutes and realized I don’t manage my time wisely, but this past weekend, I loaded up Durango and played for a solid 3 hours.

The game’s story pulled me immediately, and I love the intuitive controls. The graphics reminded me of my Diablo II days. Ah, nostalgia! I got caught up in exploring and crafting things for my small plot of land. The music is appropriately atmospheric and moody; just the thing for a rainy day in. The last thing I saw before closing the game were the eyes of a Phenadocus reflecting off of the campfire. Spooky and awesome! I can’t wait to go back and explore more of the world of Durango. 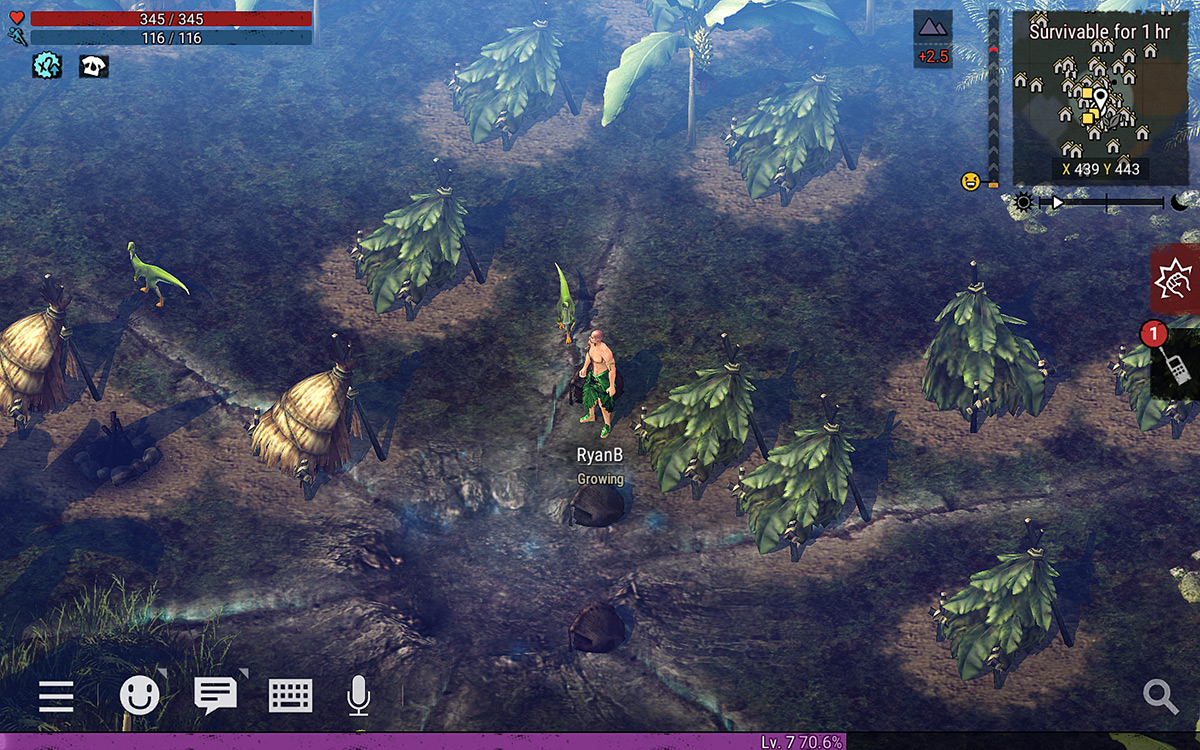 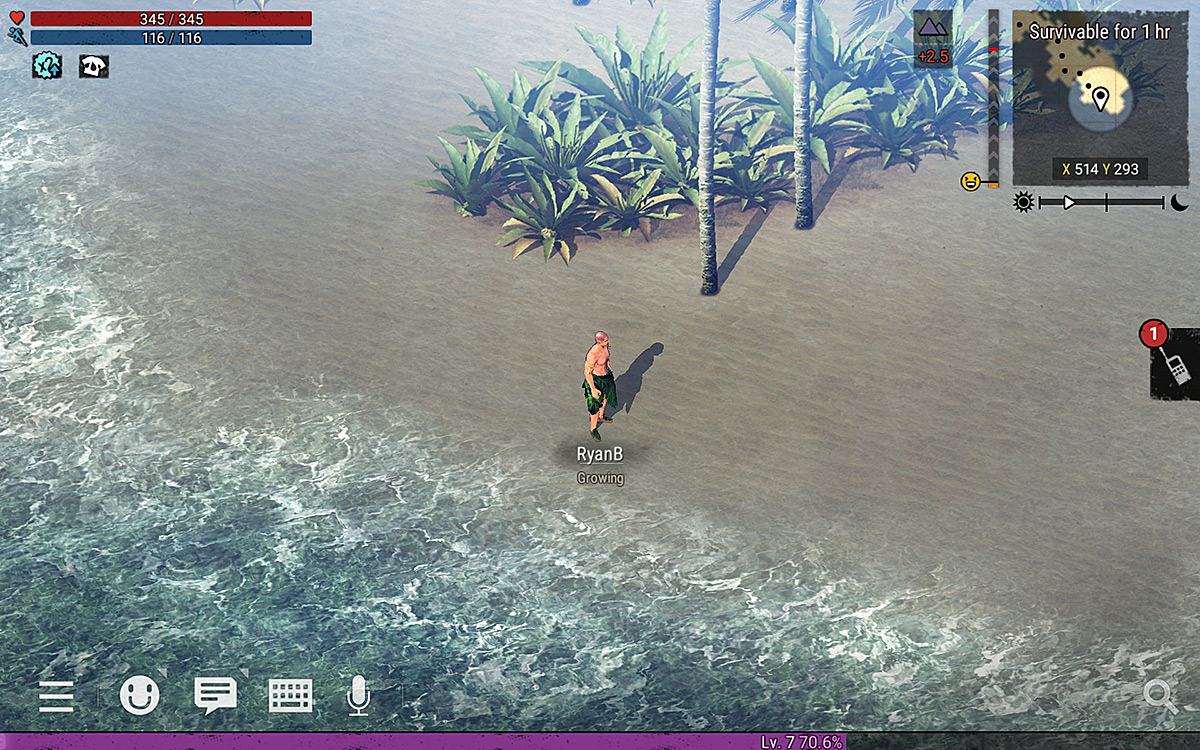 The Good:
The game begins with you customizing a character on a train, and swiftly taking that character from car to car. On the way back, something happens and time and space start warping, and you wake up to another character helping you through what amounts to a tutorial for collecting, crafting, and fighting. Menus and movement are simple but elegantly handled. The graphical quality and animations are gorgeous and smooth. Inter-player communication takes a little getting used to. The procedural generation is decent for islands types- allowing for a great range of location variety. There is an ABSURD amount of stuff to do.

The Bad:
That absurd amount of stuff to do quickly becomes tedious, having to re-craft broken items, hunt down the most basic materials, and build things piece by piece. If a character has all the items for an axe, you should be able to hold that button down and auto-craft it with a trickle down system. It is an annoyance to have to continually re-craft the tiniest items, then middle tier items, and then finally the finished product. On another note- I have yet to find a way to just drop or dispose of large items from the inventory, meaning I need to go through the above process to use the huge items into wasting time and effort at making something just to open chunks of inventory space. Pin-pointing the on screen things you want to work with can be finicky. Hitting one tree may then highlight a different tree or bush, and occasionally something 10 feet from where you touched the screen.

First, let me just say the graphics on this game are outstanding. They really utilize and harness the power of my daily driver (Samsung S7 Edge). The scenery is lush and inviting and when you witness the power and frame of the Dinosaurs it is truly a sight to behold. Oh, and that gameplay, wow. The game is truly fun and exciting to play, and it keeps you wanting to come back and to go further into the game. I didn’t find any instances where I became slowed or stopped by a pay wall, or a need to purchase something to keep advancing in the game.

The only area of the game that I would improve, if I could, would be combat. I would like to see a close-up of the battle during the fights/killing/harvesting. It actually can switch into portrait mode and that would zoom in the camera and bring those graphics closer to your face. The game’s controls are, I believe, standard for this type of game. Drag to move around the screen, tap to interact with the environment.

Overall, I enjoyed my short time with this game, and I’m sure it is something that will not get deleted from my phone (I have been known to try games and delete them based on my criteria, i.e. gameplay up to my standards, controls, graphics, and is this something that i can easily pick up and play while under the influence).