The developer asks “Have you bored those simple match 3 game?” If that makes sense to you and you answered yes, this may be your title. Ancient Puzzle: 3D Match-3 RPG is a release from Yuchgame which takes the match three puzzle, mixes some RPG style in, and tries to ride that cash cow. Flaws plague this game, from bad translation to stability issues to poor controls.

Editor’s Note: Just a small heads up that this game actually has two names, Arcade Cube and Ancient Puzzle. I guess the developer couldn’t pick from the two, but it is the same game regardless.

Ok, so I did like the games artwork. Most of the sprites were just re-colored copies, but the base art was quite nice. The translation, on the other hand, is good only for it’s comedic value. If you rely on any type of narrative or flavor text to enjoy your games (and therefore art not a robot) you may not even be able to play through it, it’s that rough.

Upon opening the app the first screen I encountered wanted me to create an account. I opted for the quick login, and kept my info to myself. I averaged about 3 minutes before the server would drop me and I would get to do it again, and again. Occasionally this would lock up the game and require me to force close it and start over. I wouldn’t call it stable. Here’s a grab from the game that sums it up succinctly. Look my fist, indeed. 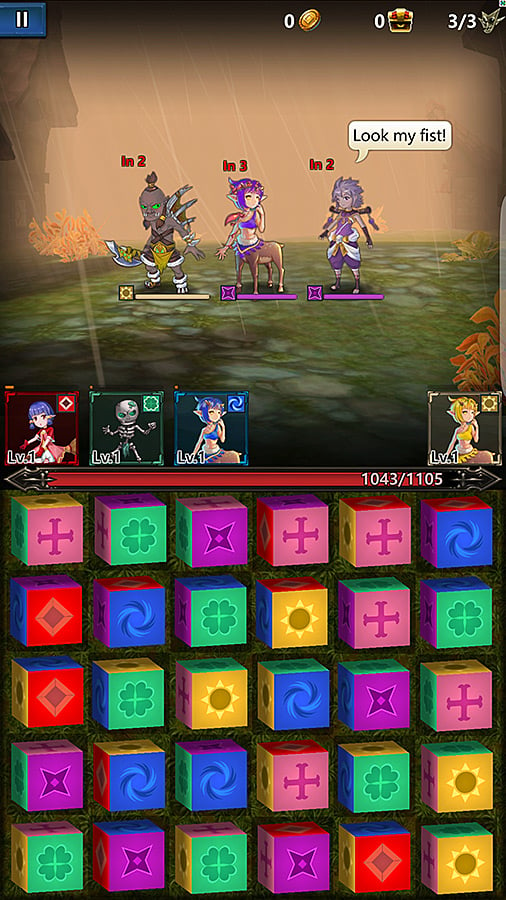 The goal of the battle system is to match up 3 or more of any color, something that most of us have had some experience with at some point. Where this game utterly fails at it is that each cube has SIX colors, and you needed to spin them instead of moving them. I would need doll hands to be dexterous enough to turn only the block I needed, and not also the two immediately to the sides. Since I don’t have freakishly small phalanges, I just spun those babies straight to frustration town. On the odd chance I whipped up some sort of match it would throw a bunch of numbers on the screen. I assume they represented some damage. Or maybe healing? It was never clear.