You create a character, yet you don’t level it up. Your character has a mount, but you can’t get off of it. There are no orcs to kill, or zombies to shoot. Actually you don’t kill anything at all in this game.  At the core basics of the game, it is a RPG where you ride around and complete quests.

The game world of Etria is a beautiful oil painted-esque landscape, filled with trees, roaming hills and animals. It is an open world type game, but played solo.  You are tasked to help out a race of people called “The Ancients”. In return for doing quests, you will receive Equus, the in game currency. You start by making a character, and are given a horse to ride. In Etria, you don’t level your character or your horse. Instead your horse has three traits, speed, jump, and stamina. These are the three things you can upgrade to make your horse better. You will need to use a trainer and some Equus to upgrade a trait. It will also cost time, the higher the upgrade level, the longer time it takes to finish. You could also use gems to speed up the process. 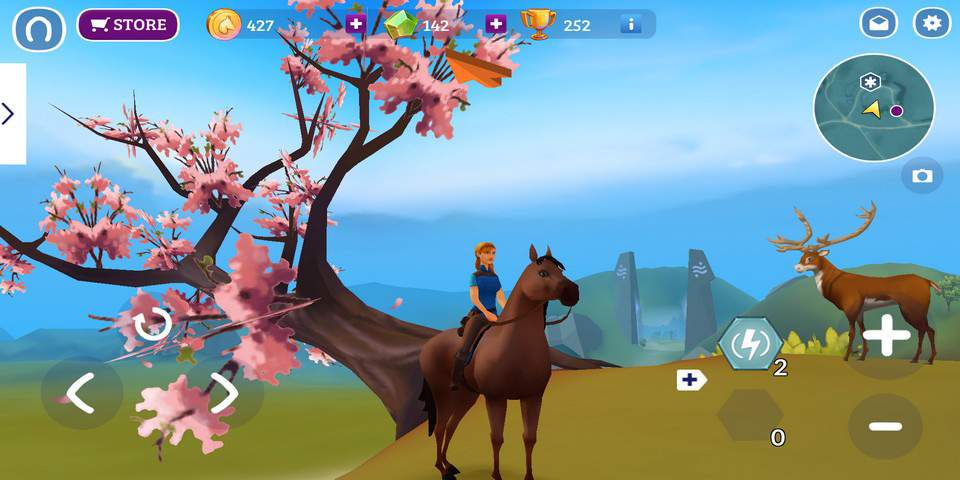 Certain quest require your horse to be of a particular level in a specific trait. Like to accept this quest your horse has to be X level in speed. You could level the traits of the horse you have, or you could also buy another horse. There are different tiers  of horses, 1-4.  Each having higher traits as you go up in tiers. Quests differ and are not to difficult. It may be a simple fetch quest, race or gather quest. There is also fast travel to certain quest hubs that use a couple Equus to use. Very convenient to have considering the maps are fairly large. You can also log into Facebook with the game and send and receive gifts from other players.

Horse Adventure: Tale of Etria is free to download and play. There is a store with IAPs in it, where you can buy some cosmetic upgrades, but nothing that would make you need to buy anything in order to have fun. This gorgeous looking game is very unique and different from most of Ubisoft’s other titles. Definitely worth checking it out.