If you’re like me and love the old school shooters of the 90’s like Quake or Unreal, you’re gonna love Rocket Shock. Rocket Shock is an arena style shooter currently in alpha on the Google Play Store. Even in it’s alpha state, this game is fast, runs super smooth and is a ton of fun to play.

No leveling up your character to unlock new weapons or perks, no huge maps where you can’t find the enemy and no running out of ammo ’cause you just had a 5 player kill streak. Just fast paced carnage, all in the palm of your hand. From this point on everything I write is subject to change, as it is an alpha build.

You play as what looks like a little floating robot, which you can equip with different weapons in a loadout screen. Currently there are only rocket launchers and grenade launchers. But you can purchase better rocket launchers and grenade launchers with coins you earn for playing matches. There are two game modes, free for all and team death match. There is a server list for you to pick games to join or you can do a quick play. You cannot however make your own game at this time. 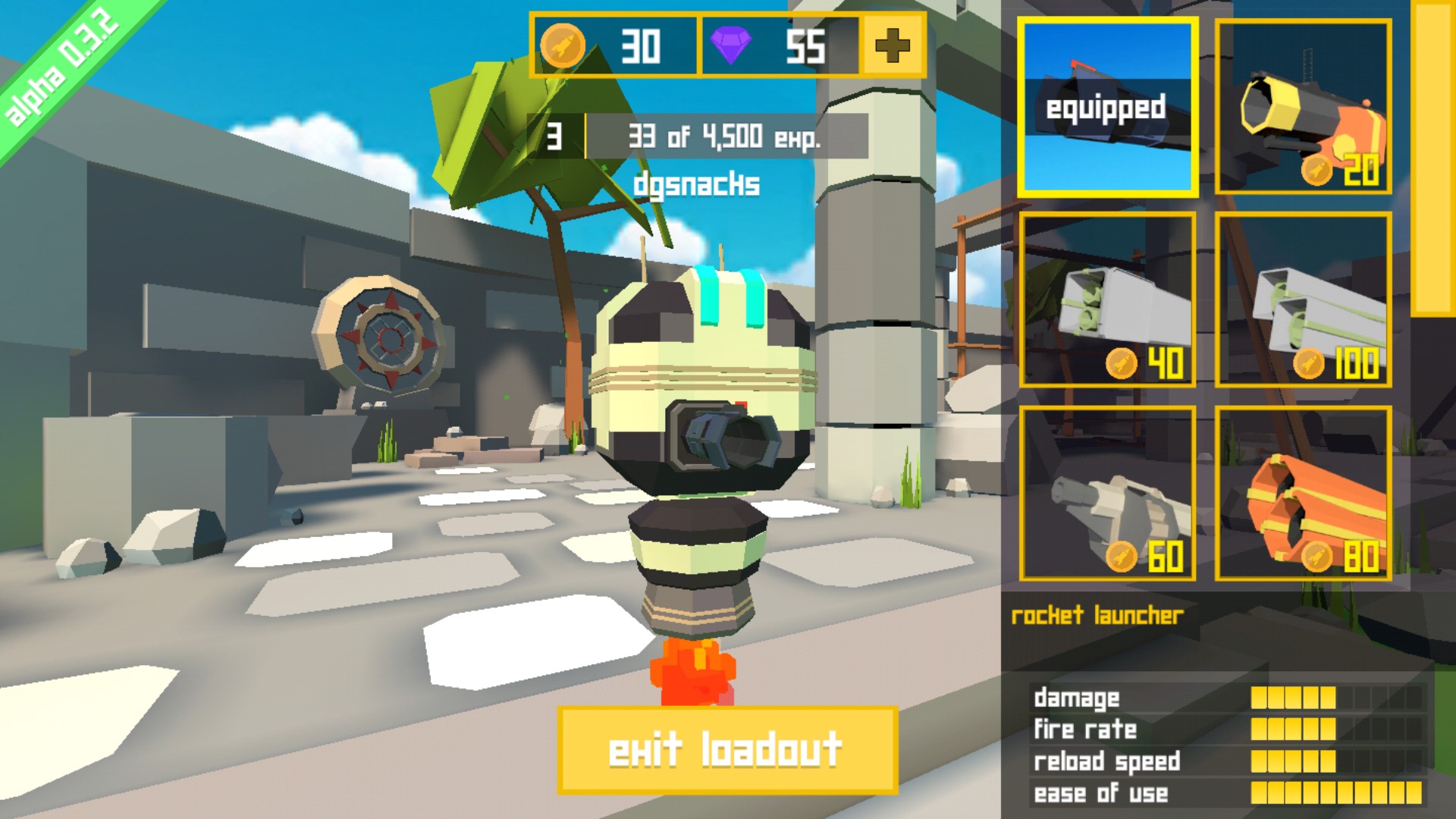 After picking a mode or server you are taken to a screen where you can use gems to boost your health, jump or damage. This is one feature I did not really like because it gives a slight advantage to players who choose to do this. On the flip side though, you earn money and gems after a match. So if you are smart with your boost purchases, you could play all the time with the minimum boost upgrades. Also I believe it is to deter people from leaving matches. You wouldn’t want to spend 3 gems on a boost then leave a match and lose those gems, where you could gain more gems if you stayed till the end. During a match, you have infinite ammo, but each weapon only holds so much before you have to reload. There are health packs scattered across the map as well.

There are only 3 maps at this time; Japan, Egypt and Mexico. The Japan and Egypt maps look a lot like a mini Overwatch map from the pc/console game. The graphics are cartoony, but that makes the game run super smooth. No photo realistic graphics to bog it down. The action is fast paced and matches range from 4 to 8 minutes.

Having a good arena shooter on Android is what I’ve been waiting for and Rocket Shock does not disappoint . If you are into this style of game, I highly recommend Rocket Shock. Since it is only in alpha, I can only see this game getting better. It’s free to download and play off of the Google Play Store.

(Editor’s note: If this is anything like quake, I’ll finally have a reason to throw my phone.)

• Up to 8 player online battles
• Two game modes, Free For All and Team Deathmatch
• 6 different guns to unlock
• 3 beautiful maps with more to come

We will be sure to post an update as the upcoming planned content makes its way into the game. Remember, this game is currently in Alpha status so you may encounter some bugs while playing. Rocket Shock is available for free currently off of Google Play.