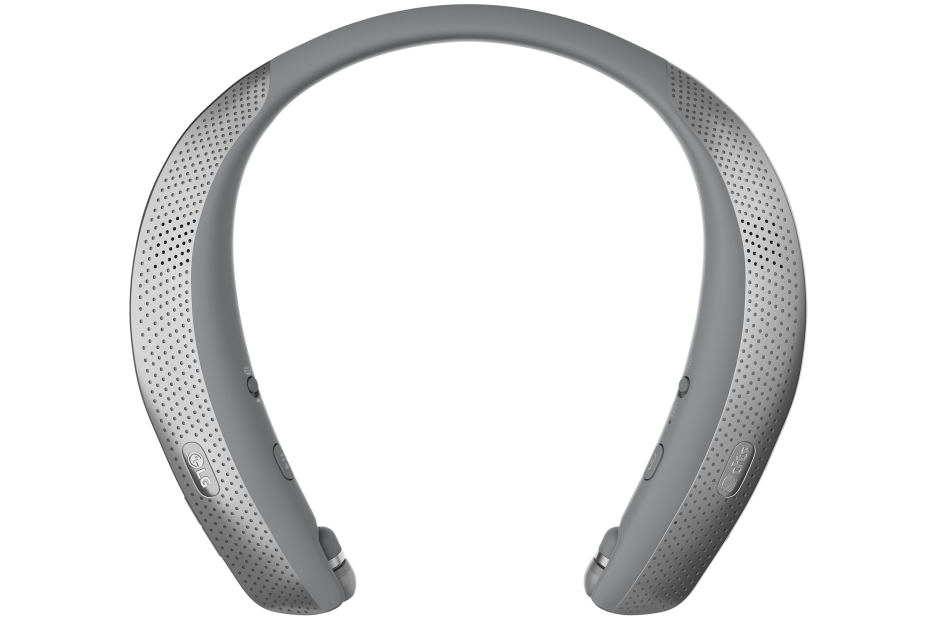 Creating a portable speaker that attempts to recreate a surround sound experience sounds like an impossible task, but that’s exactly what LG have attempted with one of its latest creations – the LG TONE Studio Wearable Personal Speaker.

Combining a high-performance speaker with a lanyard headphone design, the LG Tone is certainly not what you’d call a conventional way of listening to your music.

It works by the boomerang shaped set resting around your neck and shoulders. Then through the speakers placed around the set it creates a bubble of sound around you that’s quite unlike any other audio experience that we’ve experienced. Therefore it’s, naturally, quite hard to describe. Imagine if your surround system was shrunk down to and then placed tactically around your shoulders – but even that doesn’t do justice to the LG Tone experience.

The complete 360 degrees of sound can envelope you if you’re in a quiet enough environment, with the music, games, and films we all tested taking full advantage of the set. Sounds piped up to our right, left, and – most disarmingly – from straight behind us. 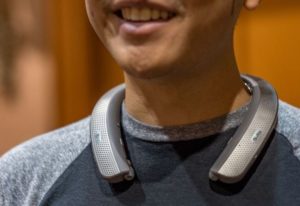 Despite the unconventional design the LG Tone is certainly comfortable too, with the rear element of the set being made of a flexible rubber – allowing for a snug fit around your neck.

Describing the quality of the audio itself is easier than describing how the set works too. The separation of channels either side of the set is very clear, with no distortion at higher volumes. The set can produce audio between 10 and 20hz as well, so it has a real kick when played at top volume.

Many will not see the point in such a speaker of course, but the LG Tone is surprisingly effective in shrinking down the surround sound experience – although the set is naturally better when you’re stationary, with excessive movement (such as when you’re jogging) often distorting the sound to a notably irritating degree.

You can also switch to listen to your music via a retractable pair of headphone buds that come out of both ends of the set if you don’t wish to annoy those around you. The sound from the earbuds themselves is crisp and clear – not sensational, but certainly of a much higher standard than you’d get from any mid-range earbuds.

Standing out from the crowd 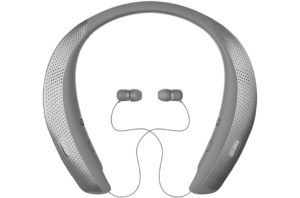 There is, naturally, the issue of how unusual it looks when compared to other headphones of course. Resting around your neck it’s not something many will be able to stomach wearing in public, although it can fit comfortably under a collar of a coat or jacket. It certainly doesn’t stand out as much as you might expect or fear.

It also helps that it’s a far sleeker and more solid looking device compared to past LG Tones, being constructed from a flexible plastic with a metal finish that doesn’t feel tacky or unwieldy. The retractable earbuds don’t feel like a cheap extra add-on to the device either, and are surprisingly durable.

For a device that could be easily dismissed as a gimmick the LG Tone is very well stocked when it comes to features as well. There’s a range of buttons on the set itself so there’s no need to fumble for your phone or remote for instance – including in-built options for answering calls, playing and pausing music, and a dedicated power rocker.

A 3.5mm input for any device that can’t connect to the set via bluetooth is also included, as well as an auxiliary port that allows you to plug into your home theatre set up. The micro USB port at the back allows for the device to be easily charged as well. 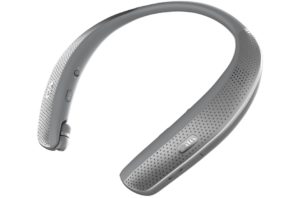 The LG Tone Studio HBS-W120 is by far the best speaker of this type out there – but it’s admittedly not got many competitors. It’s far from being another set of headphones with a pointless gimmick though.

This speaker doesn’t offer just a hugely unique way of enjoying music, films, or games – but provides an experience that is far superior to that of a standard set of headphones.

Ultimately it depends on your personal circumstances whether the LG Tone is worth your time. If you find yourself consuming even a fair amount of your media solo then we’d say it’s well worth taking a plunge – especially at its recent reduced price (to $190). 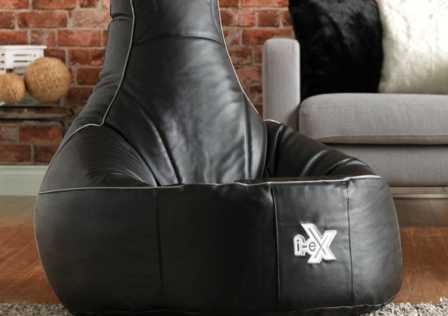