Mordheim: Warband Skirmish was only released late last month, but has already built up a sizeable group of fans thanks to its easy to grasp but deep turn based strategy gameplay.

We spoke to Ewan Lamont, CEO of Legendary Games, about how the partnership with Warhammer came about, why the game makes death a real issue and not a mere inconvenience, and his team’s plans for the title moving forward. 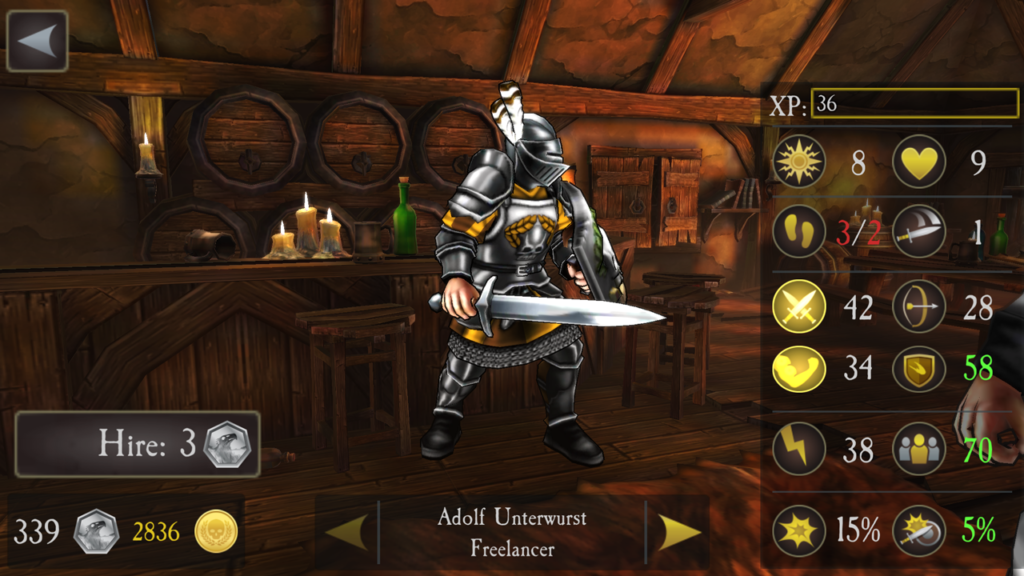 How did the partnership between Legendary Games and Warhammer come about?

We set the company up to create multiplayer multi-platform games and Games Workshop IP really suits that type of game. We are based in the same city as Games Workshop and have a good personal relationship with the licensing staff.  After a few casual chats at shows in the past we put forward some of the ideas we had in mind and they recommended Mordheim for Mobile devices to us as it was a license that was available and they thought it’d suit our skill set.

Can you explain a little about how Warband Skirmish works, and the genre it fits into?

Mordheim: Warband Skirmish is a multiplayer tactical combat game – some people have described it as “Fantasy XCOM”! You control a small band of adventurers picking through the rubble of a destroyed Fantasy city looking for valuable shards of the comet that destroyed the city.  This sets the scene for a series of turn based “mobaesque” engagements against other players with the winner getting better spoils.  You can pick from a 8 unique factions with different play-styles and level up your warriors and improve their equipment over time.

What does Warband Skirmish offer that no other Warhammer licensed title does?
Mordheim is essentially Warhammer Skirmish. If you want to play a skirmish game against other players in an urban setting on a mobile device, this is the only way you’re going to get it. We have tried as hard as possible to make it as close to the table top game that a digital version can be.  In some ways this make the final version quite controversial, as a big feature of the original table top game was permanent death and debilitating injury – but if you want to stay true to the IP that’s just what you have to do.

What were your team’s main influences when developing Warband Skirmish?

Our key influence has been the actual table-top game itself. Right from the beginning we wanted to create something that’d emulate the table top experience for users and feel totally authentic.  This includes the painterly style for the environment and character models.  The cartoony look pays homage to the Black Library graphic novels set in Mordheim and also to the painted miniatures. In fact it is a lot easier to list the areas we diverge from the tabletop version: 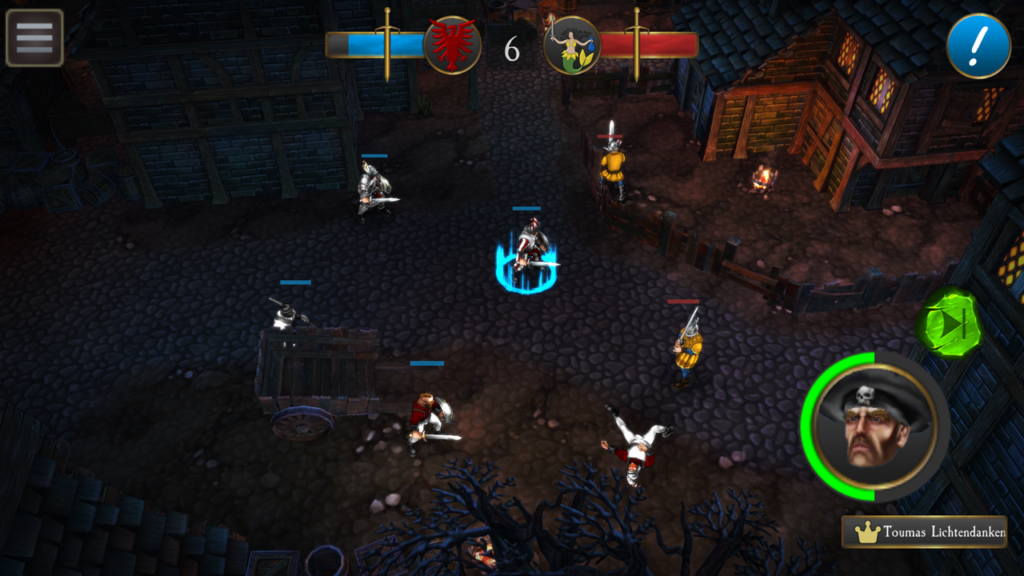 Is there a range of weapons to use in the game, and what is your personal favourite?

Yes there are a huge range of weapons in the game; in fact it has been quite cool at a design level digging that little bit further into the Warhammer Universe so that even sword types have different effects in the game. We have lots of different variations of weapons that do different things. My favourite weapon would have to be the Hochland Long Rifle, as there’s nothing more satisfying than drilling a hole through the enemy warbands captain from across the battlefield.

How important is the story/narrative aspect of the game?

It’s really important to set the flavour of the game as it provides context as to why everyone’s fighting, where you’re in the world, and adds richness to the player experience. But really the player is creating their own narratives as they go. Each engagement is an episodic story in its own right, with the unknown thrill of who’s going to be dead or alive at the end of it.  It makes the Walking Dead look like a soap opera.

What challenges did you face during development, and how did you overcome them?

The hardest thing is trying to ensure everybody enjoys the game and feels like it’s fair even though in every engagement there will be one winner, one loser and lots of dead warband members.  We try as much as possible to level match opponents and give players the option to use fate to modify some adverse results.  We have managed this successfully, and permanent death does add a lot of spice to the game – but players are left with the risk that at some point in the game they could get really unlucky. 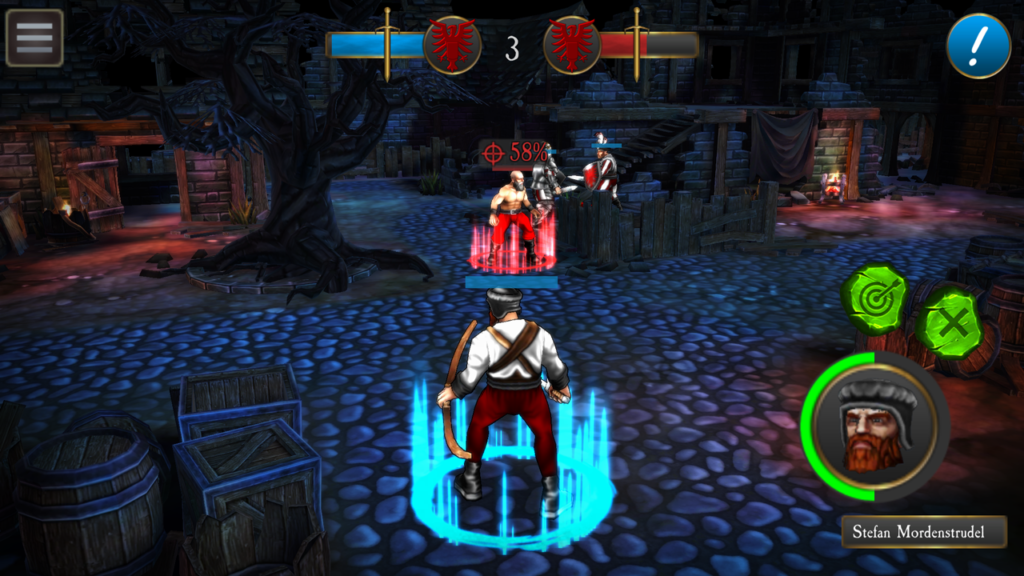 What specific tools and techniques did you use to develop the game?

The front-end side of things has been done using Unity. The back end is our own proprietary multiplayer matching engine, and we’ve built a way of visualising the multiplayer database through a platform we’ve created called “Sigmar.” Right now people play against other player created warbands, but in the very near future we’ll be switching on true live multiplayer.

There are no particular aspects; the fact that it all hangs together very nicely is something I’m extremely proud of, and couldn’t be happier with how the art, code and design complement each other. In many ways it’s still the original IP that remains the King!

What tips do you have for people playing Warband Skirmish for the first time?

Be careful about choosing the right warriors to recruit right from the beginning. The stats are selected at random, so pick good guys with good stats. Don’t be afraid to run away if you’re getting a kicking, and make sure you dismiss people in your warband that aren’t pulling their weight. You’re running a mercenary warband after all!

Do you have anything planned in terms of future updates for the game, and if so, can you give us any details of what these might include?

Well we have A LOT planned! There will be new content added to the game every two weeks for the next two years, which has all been scheduled out. Everything from new hired swords, warbands from the original game, lots more unique battle maps to fight over, and special characters.

What are your current plans to bring the game to other formats?

We’re currently released in English on Amazon, Android and Apple.  We are working on translations for French, Italian, German, Spanish, Portuguese and Russian. Because it’s written in Unity it would be relatively easy to put together for other platforms. A Windows 10 version will happen at some point, but the rest will be dependent on how well the game does and contractual discussions with Games Workshop.

We thank Ewan for taking the time to answer these questions, and you can download Mordheim: Warband Skirmish from this page right now.

This feature is sponsored by Legendary Games.