Powder Hound: Snowball Madness is a game in which a snowball machine, driven by an erratic AI called Dred, tries to trip up a skiing dog called Rocket using a limitless supply of giant snowballs.

In other words, it’s bonkers. Fortunately, that’s rarely a bad thing in the world of casual arcade games on mobile.

To control Rocket as he barrels down the slope you just need to tap the screen. Rocket travels diagonally, left to right or vice versa, and each tap inverts his trajectory. But there’s a catch: changing direction costs energy, and when that runs out Rocket is dead.

Fortunately you can replenish your energy supply by collecting stars. Yellow ones top you up, while copper-colored ones top you up and give you a speed boost that you can deploy by holding down on the screen. 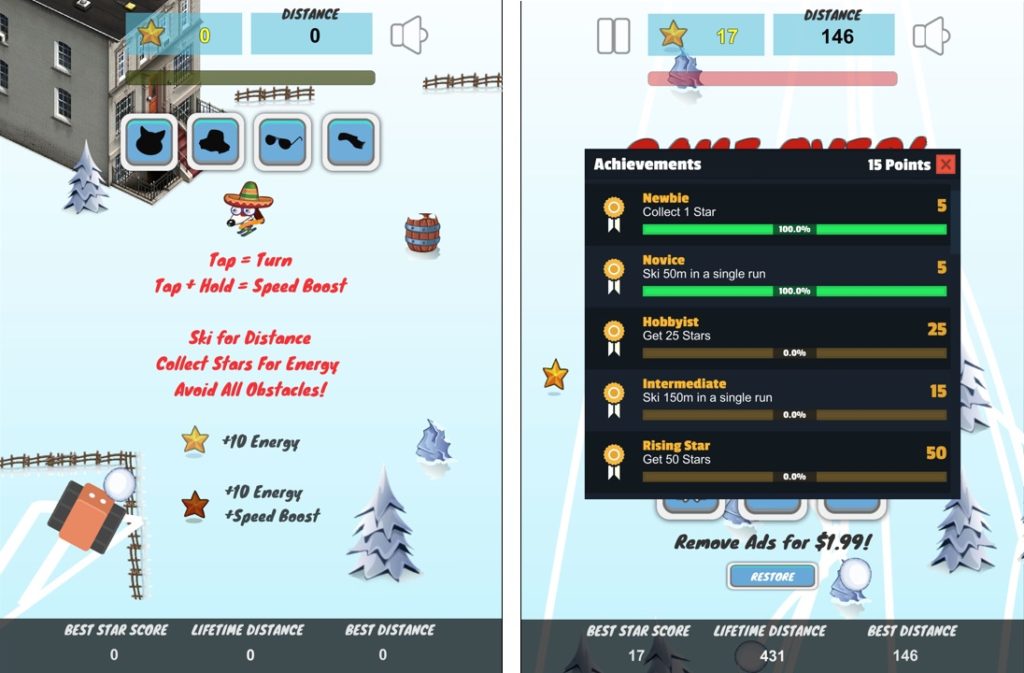 Careful though – it’s Rocket is that much harder to control when he’s travelling at twice the speed.

It’s an awkward, binary control method, but over time you’ll master it to the point that you can weave past trees and guide little Rocket through narrower gaps than you thought possible.

Of course, avoiding trees is the least of your concerns. Your main problem is the snowballs that roll at every conceivable angle down your slope. Collide with one of these and you’ll be wiped out like a moth on the windscreen of a moving car. The random pattern of these snowballs and the random layouts of the course mean every game is different.

Snowballs may be your main enemy, but they aren’t your only enemy. Hitting any object on the screen, aside from a star, will bring you to an untimely end, and even veering into the edge of the screen is fatal. Powder Hound is difficult by design.

Likewise, you can easily tune out after assuming you’ve crashed into a tree only to find that you’re still going — until this momentary confusion sees you ploughing into a snowball.

Death comes often, which means you’ll spend a fair amount of time clicking past the full-screen ads that show up after every few lives. These can be pretty annoying, though you can get rid of them by laying down $1.99 for the full ad-free version of the game.

Powder Hound isn’t a visually sophisticated game, but it looks clean and cartoony, and little touches like the tracks left behind by the snowballs and the birds that flit across the screen give the whole thing a bit of polish.

You can also add your own touch of visual flair by giving Rocket a hat, glasses, and scarf, or even replace him altogether with a cat, a panda, or a penguin. These are all purely cosmetic, and we’d like to see more, but it’s nice to be able to tweak your main character from the outset.

If snowballs are a bit too much for you – and to be fair the snowballs in Powder Hound are deadly — then you can avoid them altogether by playing in the Casual mode, which lets you see how far you can get without interference. Whether you prefer this mode or the other one will depend on your level of skill.

Whether you prefer this mode or the other one will depend on your level of skill, but either way Powder Hound is an accessible casual game with solid presentation and a fairly original concept. If you’re looking for a new high score-chaser, this one will do. Check it out now on Google Play (and the App Store!).

Powder Hound is an accessible casual game with solid presentation and a fairly original concept. If you’re looking for a new high score-chaser, this one will do.