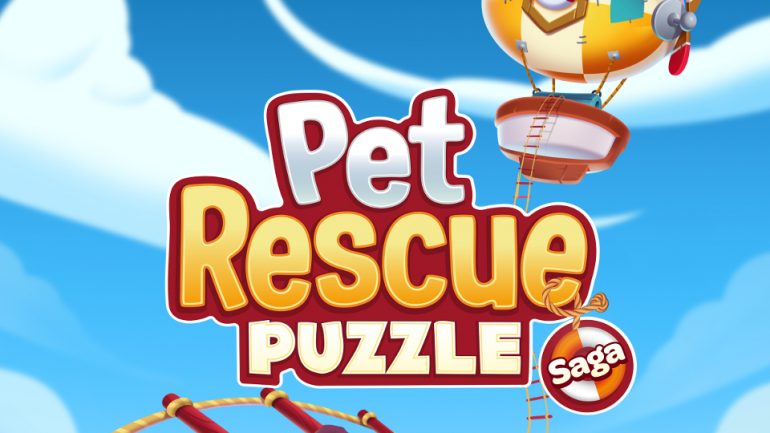 King is at it again with a brand new match three puzzler to add to its portfolio. It sits alongside the likes of Candy Crush, Bubble Witch, Legend of Solgard, Farm Heroes, and more.

The focus in this one, as the name suggests, is rescuing pets. You’ll do this in a variety of different ways, from matching stuff to clear paths for monkeys to climb down vines to helping dogs land safely in floating rings so they don’t drown.

In terms of gameplay, it’s no different from King’s other standard match three puzzlers in all ways but one: you can match two blocks minimum in this experience.

This doesn’t really add anything to the genre, but instead makes it more accessible to those that are just getting grips with it.

As a result, Pet Rescue Puzzle Saga ends up feelings like a King match three that’s aimed at a younger audience.

This is reinforced by the Pixar-style visuals, low level of difficulty despite having easier mechanics, and the mission objectives, which are never violent in nature.

Even levels that would typically be a boss battle in another match three are made friendly here. In one level, we had to help guide a massive bear down to the bottom of a level by hitting it with power-ups to make it break blocks beneath it.

That’s right: power-ups play a huge part of this experience too, except they’re much easier to trigger. While in other match threes you’d have to create a certain pattern of blocks to trigger a power-up, this one is all about connecting a certain number of blocks.

Power-ups play a big part, and matching them together is a lot of fun

And they can be connected in any particular pattern, as long as they’re touching each other. So you could have three rows of three blocks to create a nine, or a long line of nine individual blocks.

We also enjoyed matching power-ups to increase their effects. For example, if you fire a rocket into another, you’ll trigger them both at once. Match a rocket and a bomb, and you’ll create a much bigger explosion than otherwise.

This came in handy during trickier levels, when we had to use our wits to progress. Sure, it never got hard, but if you’re aiming for a high score it does pay to be fancy.

Ultimately, there is nothing inherently wrong with Pet Rescue Puzzle Saga. It’s a more than adequate match three by King, the masters of the genre, and it’s as fun to play as the rest of them.

It’s just not easy to recommend for anyone but the youngest of audiences. If you have a two year old kid that you want to introduce to games, this is a great entry point. Anyone older will lose interest very quickly though.

A match three for a younger audience

Pet Rescue Puzzle Saga is a solid match three puzzler by the masters in the genre, but it's just too easy to recommend to anyone but the youngest of gamers