You’ve got to give it to NetEase: it’s making some of the most ambitious and original mobile games in the world right now.

Earlier this year saw the arrival of LifeAfter, a genre-straddling multiplayer survival sim in which you have to build a life following a zombie apocalypse. Now the studio is plunging us into another, different sort of dystopian nightmare with Disorder.

Details are thin on the ground, but we do know that the game is set in 2030, in the aftermath of a nuclear holocaust. Society has collapsed, and the world now resembles a sort of high tech wild west dominated by warring factions.

NetEase has just released a teaser trailer focusing on one of these factions: Ghost Puppets (the other two are called Pale Knights and Cadaver Unit, giving the whole thing a distinctly MGS vibe.)

The trailer also introduces a couple of characters, called Beretta and Enfield. In case the reference eludes you, these are also the names of gun manufacturers. When your protagonist in named after a handgun, you know you’re in for a good time.

Also, Beretta’s surname is Capone, doubling down on the name-based awesomeness.

Puppet on a string of bullets

Both Beretta and Enfield are members of the Ghost Puppet faction. You would tend to assume that this makes them allies, but you’d be wrong – the trailer sees them fighting to the death on top of a train.

The trailer deals in clues rather than facts. So, after the train fight we see Beretta drowning her sorrows in a bar while the nervous patrons exchange rumors about Beretta and Enfield’s relationship, which seemingly used to be much more cordial than now.

As if to underline the absence of cordiality, Beretta stubs out her cigar on a wanted poster of Enfield.

Disorder is a team-based multiplayer game. That’s all we can tell you right now. To find out what happened between Beretta and Enfield, and what’s going on generally with all these shadowy factions, you’ll have to play the game.

It’ll be out later this year. You can find the game’s official website here, and also be sure to check out its Facebook and Twitter pages. 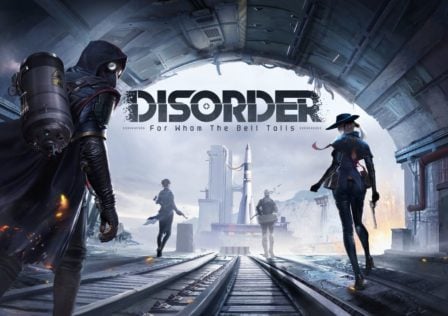