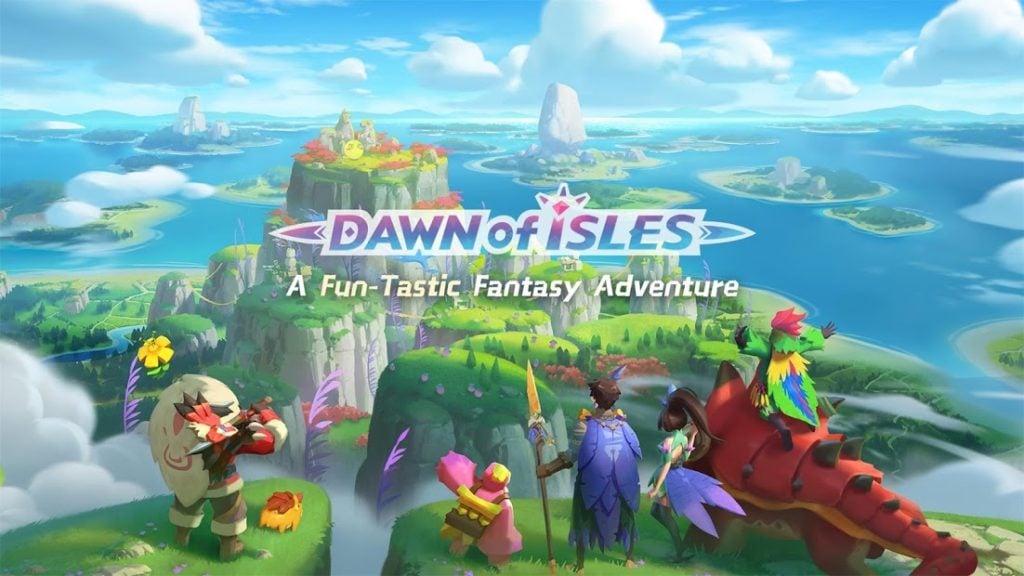 Dawn of Isles garnered a fair bit of hype when it was announced earlier this year. Here was a mobile MMORPG with gorgeous visuals that promised to contain some actual gameplay.

That’s right – it appeared that instead of autoplaying your way through a myriad of generic environments, you’d instead gather resources, craft your own gear, and build your own home.

While all of that stuff is all here and present, spend a few hours with Dawn of Isles and you’ll quickly realise that all of it just lacks in substance.

Rather than just crack on with crafting a nice set of armour and weapons, you’ll find a bunch of time gates. Sorry, you can’t craft your wooden sword because you haven’t levelled up your Deity Alter (basically your town hall).

So your early hours with the game will be… much like any other mobile MMORPG. You’ll complete a series of main and side quests by tapping on their objective marker on the left of the screen to automatically run there.

Once you get to your quest location, you’ll either talk to a person, fight some monsters, or collect resources. Collecting resources is done automatically – complete with some lovely animations – but fighting monsters is manual – at least at first.

You can auto attack and use a variety of skills, which you’ll unlock as you progress. What’s interesting here is that the skills often combine with each other in a similar manner to Divinity: Original Sin.

It’s all pretty straightforward, with elements interacting with each other exactly how you imagine they would. Mix a tornado with fire to create a… firenado? Stuff like that.

Much of your early questing involves setting up your home hub, but it’s all pretty straightforward. You’ll mostly gather sticks and stones to craft buildings and upgrade them. Despite this, there’s a real lack of crafting in the early game.

You’re basically planting the seeds for the crafting to come – literally in the case of farming. You’ve got a small patch of land that you can use to plant a few crops and use them to cook up a few dishes.

Much of your early questing involves setting up your home hub

The biggest problem is that when you eventually get there, crafting isn’t particularly that interesting. There aren’t really that many options in terms of armour and weapons, and armour isn’t even cosmetic.

That’s where the cash shop comes in. While, granted, you can get plenty of cosmetics from playing the game, much of them come from spending actual money.

We’re of two minds about this: it’s good, because that eliminates much of the pay to win but it’s a shame that we can’t show off our hard work – just the size of our wallets.

We’ve got this far into the review and still haven’t mentioned the visuals. That’s pretty criminal as they’re absolutely outstanding – arguably the best looking mobile game we’ve ever encountered.

There’s just a ton of visual polish. Fast travel and a giant bird will actually arrive to pick you up, grass moves with your character, that sort of thing.

We’ve spent a ton of time in this game just marvelling at how great it looks, and how impossible it seems that it’s on mobile. Really, it looks like a PC MMORPG.

Even more impressive is the fact that it runs at 60 frames on certain devices, and it really hits home how far mobile gaming has come. It is a bit of a battery hog though, so bear that in mind.

Overall, we have mixed feelings about Dawn of Isles. It’s easily one of the best mobile MMORPGs going, but it’s not quite the saviour that we hoped it would be – and perhaps it was unfair to expect that of it in the first place.

What it is, is a solid entry in the genre on mobile, with interesting combat mechanics, less autoplay, and plenty of stuff to do outside of combat, from crafting your home town to farming to gathering pets.

The systems are, ultimately, quite shallow and you’ll almost certainly head straight back into Old School RuneScape when you want to do some actual crafting, but it’s still a step up from most other mobile MMORPGs.

The systems are, ultimately, quite shallow

That’s the best way to look at this one: it’s a step up. It’s not the best and will likely pave the way for better things to come, but Netease has done an admirable job of giving us something just a little different and more polished than the norm.

Oh, and those visuals are ridiculous. We wouldn’t judge you if you played just for those if we’re perfectly honest.

Dawn of Isles is a visually stunning mobile MMORPG that promises innovation but merely delivers a small step up from its competitors.