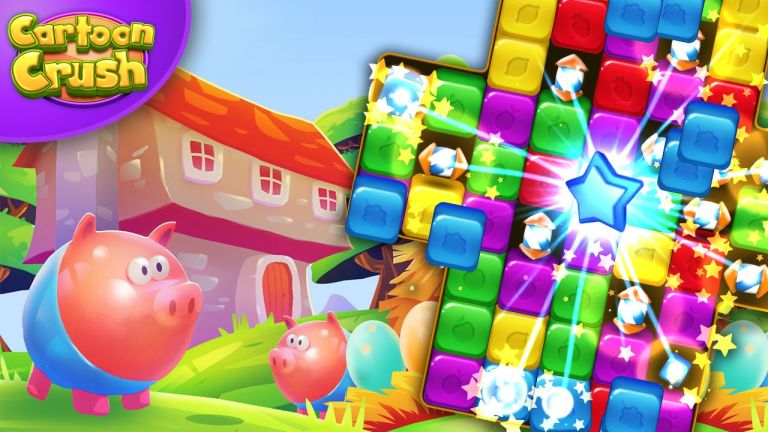 Finding a new casual game to brighten up those bus trips and toilet breaks is one of life’s great joys. That being so, today could be your lucky day.

Cartoon Crush is the latest matching puzzler in the vein of smash hit time-filler Toon Blast. It involves tapping your smartphone’s screen to clear blocks of a particular color, as long as they’re in groups of two or more. Every time you clear some space, new blocks fall into it.

The game looks fantastic, with bold cartoony visuals and spectacular pyrotechnics. Matching two blocks clears a space, but matching more produces boosters. These include rockets that shoot off and take entire rows and columns with them, barrels that explode and clear a blast area, and stars that pick out every block of a particular hue.

Better still, you can combine boosters to create new effects. Tap a star next to another star and the entire board will be cleared in a flurry of magical destruction. It’s awesome.

The aim in each stage is to clear a certain number of a certain color or type of block, and the way to do it is to approach the task tactically. Clearing two blocks at a time rarely results in success – instead you need to try and create larger clusters, unlocking both boosters and victory.

There are more than 600 levels in Cartoon Crush, and the game keeps adding new elements to up the challenge. You’ve got weeks of blissful time-killing ahead of you.

Multiplayer is included too, in a variety of forms. There are the daily and weekly tournaments and leaderboards, letting you compete with strangers, and there’s a neat team play feature where you can create a little gang of your Facebook friends and share lives etc.

At the time of writing, Cartoon Crush is sitting on a 4.7 average user rating on Google Play, and an even more impressive 4.8 on the App Store.

You can download it for free on Android (and iOS) right now.