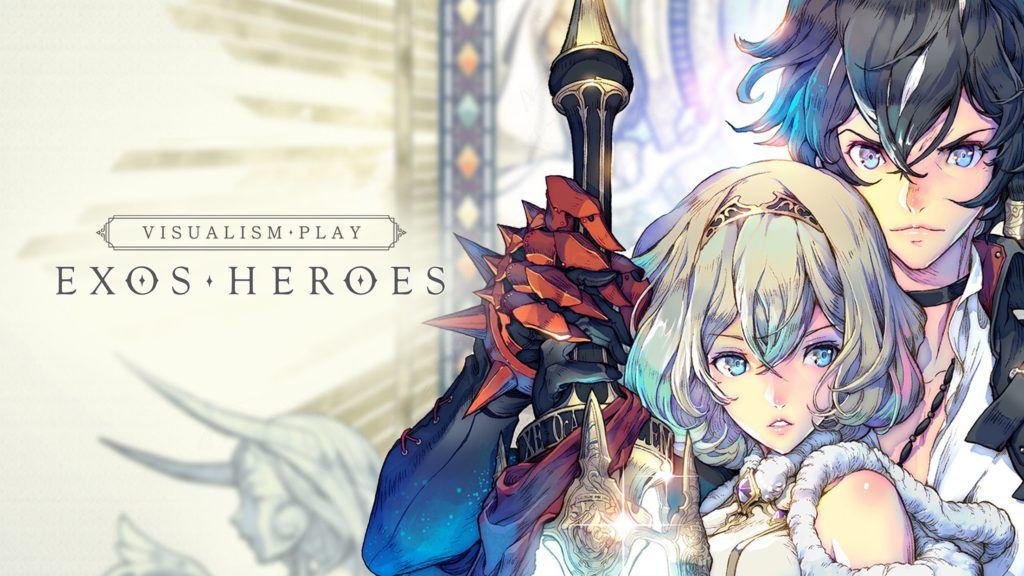 Exos Heroes is one of the most eagerly anticipated gacha games of the year. Developed by Oozoo and LINE Games, this slick-looking title won legions of fans in its native Korea thanks to its outstanding presentation and well-balanced gameplay.

Very little has been lost in translation for this Western release. Exos Heroes is a conspicuously upmarket gacha game, and care has clearly been taken to ensure that the English language version is up to the standard of the original.

The story, which starts with a prologue lasting over an hour, sees you playing as a treasure hunter called Zeon. Zeon has lost his airship, and he wants it back. Naturally, he’s prepared to seriously injure anybody who gets in his way.

After finding a derelict airship in a cave, Zeon recruits a reluctant former pilot to fly it for him – but not before learning this gruff pilot’s tragic backstory, and convincing him to leave his ghosts behind, aided by the pilot’s eager young apprentice.

That’s the kind of joyous melodrama you’re in for. Exos Heroes does a good job of injecting its battles and situations with enough narrative juice to make you really want to beat the sneering villains and reward the heroes.

The voice-acting helps, too, though this isn’t universal. Conversations frequently take the form of 2D text-based affairs, and these are sloppily translated – a rare chink in Exos Heroes’s presentational armor.

Otherwise the presentation is excellent both technically and in terms of design. Each lavishly detailed 3D character is unique and full of personality, and the battle animations are so bombastic and cinematic that you don’t mind watching them a million times.

The summoning animations are equally polished, though you’ll soon revert to skipping these rather than waiting – particularly when you’re summoning multiple heroes.

Another nice touch is the presentation of the overworld, which is an interesting mix of 2D and 3D. You can explore this overworld – as well as the entirely 3D towns – freely, or you can auto-navigate towards missions instead. The advantage of exploring is that you sometimes find loot lying around.

In terms of combat, Exos Heroes offers the standard turn-based action with a couple of minor twists. The first of these is the mana system for replenishing skill bars, which adds a tactical dimension since you need to perform certain actions with certain heroes to generate mana. It’s a clever alternative to the usual cooldown timers.

Then, more importantly, there’s the “break” system. This allows you to “break” enemies by attacking them using heroes with matching Guardian Stones, thus softening them up. The complexity lies in the fact that you often need to avoid breaking enemies in order to get three stars in a level.

The upshot of this is that you can’t rely on autoplay to fight your battles for you if you want to maximise your pulling power.

Your airship in Exos Heroes is your base of operations. It’s here that you manage your team, summon new heroes, craft items, and so on.

Summon comes in a couple of different forms, with different outcomes. Premium summons guarantee you at least one Legendary Hero from every 11 pulls, while Free lets you summon a character every eight hours for free. Handily, your useless heroes aren’t actually useless, since they contribute to your mileage.

Heroes come in the usual variety of tiers, elemental affinities, roles, star grades, and so on. The tiers, from worst to best, are Common, Magic, Rare, Legendary, and Fated, while the roles include Warrior, Assassin, Paladin, and so on.

A hero’s max level is determined by their star grade, meaning that high rarity characters have exponentially greater potential than their low rarity underlings.

The pull rate for premium summons is fairly underwhelming at present, which is good news for free-to-play players and not quite such good news for serious gacha gamers – but that can change as the game matures.

There’s no shortage of features in Exos Heroes, including crafting and Fatecore, but one of the most intriguing inclusions is Exploration. This is essentially an idle component RPG component, or rather two.

As are the PvP and guild features that become available as you level-up, and the wildly diverse array of 200 heroes. All in all, Exos Heroes is a solid gacha RPG package, with excellent presentation, decent writing, and well-balanced combat.

If you’re a gacha veteran, your attention no doubt went straight to the key line: “one Legendary Hero from every 11 pulls”. It’s an underwhelming pull-rate, but for newcomers to the genre that won’t be an issue. Exos Heroes has plenty more to offer. You can download Exos Heroes for free right now on Google Play (and the App Store).

All in all, Exos Heroes is a very welcoming and well presented package.