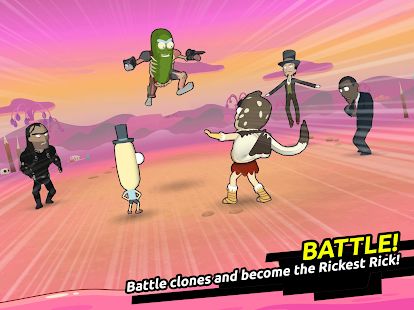 Rick and Morty: Clone Rumble, the follow-up to 2017’s Pocket Mortys, had gone live in select territories on the Google Play Store.

Once again you’ll play as Rick Sanchez, the amoral genius whose scientific prowess enables him to get up to improbable levels of mischief, usually with his grandson Morty in tow.

It’s not entirely clear, except to the people in the territories where it’s available, exactly what happens in Rick and Morty: Clone Rumble. The Google Play description is only mildly helpful.

It seems that you need to grow, evolve, and mutate clone DNA to create a clone army. These clones need to have different characteristics, to deal with Rick’s multifarious enemies from around the multiverse.

You’ll collect Rick and Morty characters like Poopybutthole and Birdperson, journey through eight chapters of Rick and Morty shenanigans, and battle rival Ricks.

The user reviews are pretty awful so far, with even the four star review labelling the game “kinda boring”.