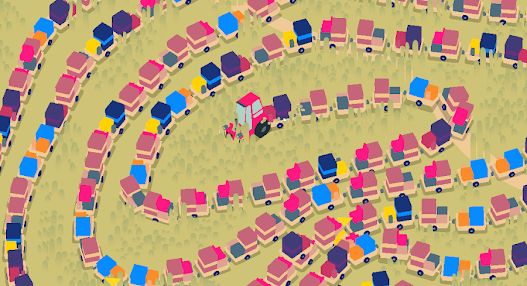 Casual is a pretty elastic definition. The case could be made for thousands of games to appear on this list, and at the same time you could argue that all of the games in this list belong in other lists. Taxonomy is hard.

We’ve kept it brief and, we hope, relatively uncontroversial. We’ve also deliberately ignored the new mutant genre of hyper-casual games, because those aren’t the games we tend to cover on Droid Gamers.

You guys are far too discerning.

There’s something very satisfying about a TV or film franchise finding its perfect game genre. Spongebob: Krusty Cook-Off is exactly the right casual game for SpongeBob, challenging you to compile orders against the clock in a growing variety of restaurants as Mr Krabs expands his cynical catering empire across Bikini Bottom. It runs into free-to-play difficulty issues, but until you hit that wall you’ll have a blast.

Pokemon Cafe Mix is a casual puzzler that manages to inject some originality into the timeless matching format. The game presents you with a big pile of Pokemon heads that you have to swirl and shuffle around. Meanwhile you need to serve Pokemon that come into your cafe, with the assistance of other Pokemon who work for you and lend you their magical powers. It’s adorable and surprisingly fun.

The original Fruit Ninja came out a decade ago, propelling developer Halfbrick into a stratosphere of success so heady that it didn’t even have to churn out a sequel to capitalise. Until now. Fruit Ninja 2 is everything you’d expect it to be, with all the chopping action of the first game along with real-time multiplayer, customizable ninjas, a huge variety of modes and minigames, and several different locations.

A matching puzzler based on Harry Potter? What is this, 2009? It may not sound like the most inspiring concept, but fortunately both Harry Potter and casual games are timeless. This well-made, universally beloved casual game contains characters, backdrops, and music from the films, and sees you unlocking and upgrading spells, collecting cards, taking part in events, and generally wallowing in warm and cosy Harry Potter goodness.

Timed to coincide with this year’s Trolls World Tour, Trolls Pop is a colorful bubble shooter that sees you unlocking levels, earning rewards, collecting trolls, and so on. It’s a solid casual game, but some of its appeal has to be attributed to the presence of those life-affirming, music-loving trolls. Poppy, Branch, DJ Suki, and others are all available as playable characters, and they all bring their own magic powers. You’d have to have a heart of stone not to like it.

Boy do we as a gaming community love to merge stuff. There are hundreds of games built on the core premise of sliding a thing into another thing to combine them, but EverMerge is just about the best. This ultra-casual world-builder sees you merging buildings to make bigger buildings, people to make other people, shrubs to make fruit trees, and much more. There’s a dollop of resource management in here, but EverMerge is essentially an exercise in self-hypnosis, in the best possible way.

Developed as a result of an internal PikPok gamejam involving employees who don’t make games, Clusterduck is a stylish and irreverent take on the merging genre that sees you combining ducks to create genetic mutations. Some of these will be dead ends, while others will result in ducks with swords for heads. In evolutionary terms, that’s pretty much like winning the lottery.

Funko Pop! dolls have carved out a niche for themselves representing pop culture figures in an adorable, child-friendly way. Funko Pop! Blitz takes that basic idea and turns it into a match-three game. But, crucially, the gameplay is more or less a sideshow. The real fun is in collecting virtual Funko Pop! characters from franchises as diverse as Jurassic Park, Shrek, and the US Office. Plus, new packs are being added all the time.

We never stop marvelling at the sheer versatility of golf as the basis for a huge variety of casual games. Some, like Golf Clash, are just golf, while others, like Golf Peaks, are not really like golf at all. Golf Skies falls into the second camp. It sees you launching golf balls into the air and steering them around planetoids. It’s far from perfect, but there’s nothing else quite like it on the Play Store.

Having established itself as a top developer with stylish isometric chase game PAKO, developer Tree Men Games took the series in a more casual, playful direction with PAKO Caravan. Like a vehicular take on Snake, it sees you stringing together a line of caravans and steering them through a series of colorful stages. There are 100 missions to complete, 15 levels, tricks, missions, leaderboards, and more – all for free.

Fancade, from developer Martin Magni, is a totally unique proposition: a virtual arcade consisting of dozens of mini-games made within the app itself. The tools are open to everybody, which means new mini-games are appearing all the time, all gorgeously presented in clean, slick pixel-art.